A number of direct and indirect purchasers of milk and potatoes have challenged the legal status of agricultural output control practices in a number of recent and on-going antitrust lawsuits (Ondeck and Clair, 2009; Frackman and O’Rourke, 2011; Hibner, 2011; Manning and Welle, 2012; Peck 2015). The plaintiffs claim that they had to pay higher milk and potato prices caused by output control agreements implemented by the organizations of milk and potato producers. The plaintiffs allege that a practice of controlling agricultural output with the purpose of increasing output price violates Section 1 of the Sherman Antitrust Act.

The economic forces leading to the idea of implementing supply management programs, which included agricultural output control at the pre-production and production stages, were similar in the dairy and potato industries. First, an over-supply of agricultural commodities caused agricultural output prices received by producers to be below their production costs. Second, the level and volatility of agricultural input prices were increasing, often at a higher rate than the level and volatility of agricultural output prices. Third, during recent decades, domestic potato and dairy industries became much more affected by the competition from international agricultural commodity markets and by the volatility transpiring from these markets. In the case of the dairy industry, an additional economic force and the most significant one was a substantial decrease in the government milk price support level, which in the past provided a price floor on the milk price received by dairy farmers. As a result, at the very beginning of the 1990s milk price volatility began to increase.

To deal with the economic forces adversely affecting the profitability of individual milk and potato producers, the organizations of these producers developed and implemented supply management programs that affected production and marketing of milk and potatoes. These were large-scale private, industry-funded and administered programs. The participation of agricultural producers was on a voluntarily basis. There was no government involvement or assistance in the implementation of these programs. They were funded by the assessments from participating producers.

In the dairy industry, the National Milk Producers Federation (NMPF) and the Cooperatives Working Together (CWT) developed and implemented the CWT program, which included a herd retirement program and an export assistance program (Parkinson, 2008; Brown, 2009; Siebert and Lyford, 2009; Brown et al., 2010; McCay, 2011). The herd retirement program (2003-2009) was used to remove from production the entire milking herds of selected dairy farmers. Nine rounds of this program were held during the period of 2003-2009. Prior to the implementation of each round, dairy farmers who were willing to participate had to submit to CWT their bids on how much money they would accept to remove from the production (to slaughter) their entire milking herds. The export assistance program (2003–present) helps the U.S. dairy farmers expand foreign markets for manufactured dairy products by allocating subsidies to participating dairy cooperatives on export of selected products. The CWT program has been funded by the assessments from participating producers. The originally introduced in July 2003 assessment was $0.05 per hundredweight (cwt), and it was increased to $0.10 per cwt in July 2006. 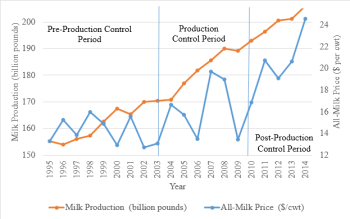 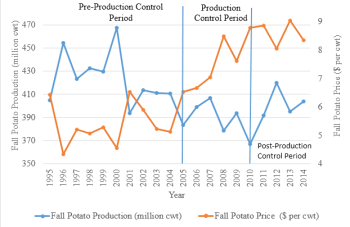 Guenthner (2012) reports that fresh potato growers in Idaho received higher prices during the first years of the program implementation. In particular, in 2008 when the potato planting area was reduced by 13%, Idaho fresh potato prices increased to $19.00 per cwt for potato varieties harvested early in the marketing season. However, due to a record high potato yield, by the end of the same marketing season prices fell below 6.00 per cwt, while the potato production and storage costs averaged $7.61 per cwt. The situation continued to change in 2009, when Idaho potato growers increased potato planting area by 5%, despite the recommended by the guidelines decrease in the potato planting area. At the same time, potato yield also increased causing the total potato production to increase by 13%. As a result, fresh potato price received by growers decreased from $8.00 per cwt early in the marketing season (August 2009) to $4.90 per cwt during the main harvest (October 2009) and to $2.90 per cwt in March 2010.

In general, the efforts of the organizations of agricultural producers in implementing the supply management programs were somewhat effective in correcting the over-supply market situation and achieving a fair price level and price stability. However, the positive price effects of agricultural supply control from the producers’ perspective tend to be observed in a short-term period. The uncertainty and complex nature of agricultural production and constantly increasing yield over time are the main factors that diminish the feasibility of the effective agricultural output control.

In light of the antitrust law and economics, the organizations of agricultural producers implementing agricultural supply control practices act as cartels. A cartel is a group of firms, otherwise competitors, who join together with the goal of controlling the output quantity and/or output price in order to increase the joint profit of cartel participants. Typically, cartel participants aim to decrease the output quantity with the purpose of increasing output price.

The agreements among competitors aiming to restrict output quantity or to control market price are considered to be illegal per se under the U.S. antitrust laws. Section 1 of the Sherman Antitrust Act (1890) prohibits contracts, combinations and conspiracies in restraint of trade. Price-fixing and output control agreements are considered to be the most damaging practices, because their typical market effects are a decrease in output quantity, an increase in price paid by consumers and a deadweight loss. There are no market and economic (from the societal perspective) benefits resulting from a pure output control or a price-fixing agreement, such as a classic illegal cartel. This is the reason why these types of agreements are considered to be illegal per se rather than being analyzed by courts using the rule of reason.

The outcomes of the recent and current antitrust litigations involving various agricultural supply control practices are large settlements that the organizations of agricultural producers have to pay. Dairy and potato industries are not the only industries that implemented agricultural supply control practices and were targets of antitrust lawsuits. The national mushroom and egg industries had a similar experience. For example, Land O’Lakes Inc. and two subsidiaries settled an antitrust lawsuit alleging production control and price-fixing in the egg industry for $25 million in 2010 (Forbes, 2010). A recently announced preliminary settlement to be paid by a cooperative of potato growers was $25 million (Capital Press, 2015).

According to this analysis, one of the main arguments for classifying agricultural production restrictions as a practice falling outside the Capper-Volstead Act immunity is that Section 1 of this Act does not specifically mention any form of collective agricultural production or supply control—that is, farmers acting collectively in crop planting or raising animals. Also, it is pointed out that in the Supreme Court cases, exemptions from the antitrust laws are interpreted narrowly. The antitrust law enforcement agencies, the Department of Justice and the Federal Trade Commission have historically taken a position that the Capper-Volstead Act does not immune agricultural production restrictions from the antitrust laws. On the other hand, one of the main arguments which is in favor of the Capper-Volstead Act immunity of agricultural production and supply restrictions is that terms “processing, preparing for market, handling, and marketing” used in Section 1 of the Act should be interpreted more broadly and should include decisions on how much to produce.

The existing case law interpreting the Capper-Volstead Act has implications for antitrust enforcement efforts of the Department of Justice and the Federal Trade Commission. There is a well-developed case law interpreting the Capper-Volstead Act and in particular some forms of collective marketing. For example, pricing practices of the organizations of agricultural producers were subjects to a comprehensive legal analysis. It is well established that the organizations of agricultural producers can set output prices, as output pricing is an element of marketing activities that Section 1 of the Capper-Volstead Act aims to protect. However, until recently the legal status of agricultural production restrictions was not directly addressed in the courts’ legal opinions.

In December 2011, a U.S. district court for the first time in history of the Capper-Volstead Act evaluated the legal status of production—planting—restrictions in a lawsuit against a group of cooperatives of potato growers and individual potato growers—in Re: Fresh and Process Potatoes Antitrust Litigation. After conducting a comprehensive analysis, in its advisory opinion the court concluded that “acreage reductions, production restrictions, and collusive crop planning are not activities protected by the Capper-Volstead Act.” One of the main arguments of the defendants, the cooperatives, was that if the Capper-Volstead Act cooperatives were allowed to fix prices, they should be allowed to restrict production. This argument did not persuade the court, which response was to state that “Individual freedom to produce more in times of high prices is a quintessential safeguard against Capper-Volstead Act abuse, which Congress recognized in enacting the statute.”

Both Christine Varney (2010) and the Court advisory opinion in Re: Fresh and Process Potatoes Antitrust Litigation inform that agricultural production and supply controls are possible under the Agricultural Marketing Agreement Act (1937). This Act authorizes marketing orders and agreements for milk, fruits, vegetables, and specialty crops.

The experience of the dairy and potato industries in implementing supply management programs point out key implications for the decision making process as well as production, marketing and pricing strategies of individual agricultural producers and their organizations in all agricultural industries.

Secondly, evaluating and developing alternatives to agricultural supply management practices, including production restrictions, deserve consideration. There is a well-developed case law establishing that price-fixing, or price-setting, activities of the organizations of agricultural producers are protected by the Capper-Volstead Act because they are elements of marketing. The issue for some of the organizations of agricultural producers to evaluate is whether some form of price-setting at the farm gate may be a viable alternative to production restrictions at the pre-production and production stages of the supply chain.