Going to college and earning a degree is an investment in human capital. Economic theory suggests that workers who make the investment in post-high school education will increase their productivity and, thus, earn higher wages (Becker, 1962). In today’s globalized economy and on the heels of the most recent recession, obtaining education or training beyond high school appears increasingly important for workers looking to improve their economic prospects. Education also plays a critical role in the economic development of communities and regions across the United States. Paired with job creation and entrepreneurship strategies, communities and regions can enhance their wealth by improving educational attainment rates and school quality, thus improving chances for a prosperous future (Pender, Marré, and Reeder, 2012; and Isserman, Feser, and Warren, 2009).

While it is generally true that post-high school education is a critical factor in determining the economic well-being of workers and communities, the characteristics of place also matter in determining the relationships between education and economic outcomes. Overall, rural areas lag urban areas in educational attainment. Many rural communities experience population loss as their young people leave for college and never return (Carr and Kefalas, 2009; and Artz, 2003). The rural wage structure rewards educational attainment differently, too, offering lower wages for given levels of educational attainment than urban areas and many rural jobs have lower skill requirements. As a consequence, many rural areas can appear less attractive to the college educated than urban areas, where the economic returns on their educational investments are higher.

In the rural context, many of the relationships between educational attainment and economic outcomes that hold true nationally also exist, but to a lesser degree. The positive relationship between economic returns and post-high school education are evident for those who reside in rural areas. Rural people with schooling beyond a high school diploma do better across the full range of economic outcomes: they have lower poverty rates, higher wages, and a higher chance of being employed compared with rural workers who do not have those qualifications. However, earnings for rural workers at all levels of educational attainment are generally lower compared to urban workers and poverty rates are higher (Marré, 2012).

Education also benefits rural communities. Studies have found a positive relationship between the average educational attainment in a county and per capita income (Goetz and Rupasingha, 2004; and Henry, Barkley, and Li, 2004). Therefore, improving access to and the quality of education is often seen as an effective development strategy to reduce poverty rates and boost economic growth. In a recent theme issue of this magazine, Higher Education’s Roles in Supporting a Rural Renaissance, a series of articles explored the role of land grant universities and the cooperative extension service in creating a rural renaissance. Rural areas run the risk of improving educational attainment only to have the most educated leave for cities and the higher wages offered there. Yet by offering natural and recreational amenities or a higher quality of life in other ways, rural places can retain or attract the highly educated (McGranahan, Wojan, and Lambert, 2011).

The effectiveness of education as a rural development strategy—especially for more specialized degrees beyond a high school diploma—also depends on the demand for those skills by employers in rural areas. If rural communities are able to find ways to support the creation of high-skilled jobs, then they can reap the economic benefits of retaining and drawing in college-educated people. In other words, analyzing changes in the supply and demand for college-educated adults in the rural workforce is critical to a better understanding of the role of the college educated in the post-recession rural economy.

A Growing Supply of College-Educated Workers in Rural America

Figure 1: Percent of the Working-Age
Population with College Education in
2000 and 2008-12, by Metropolitan
Status

The most recent national county-level education data from the American Community Survey reveal that just over half of the working-age rural population has at least some college education, compared to 63% of the working-age urban population. Figure 1 gives one picture of the changing college-level educational attainment of the rural and urban workforces for 2000 and 2008-2012. The “some college” category includes all adults who attended college, but did not complete a two-year or four-year degree. The associate’s degree category includes adults who completed a general or specialized two-year degree, and the bachelor’s degree or higher category includes all those with a four-year degree, professional degree, or postgraduate education. Note that college-level educational attainment in rural America grew over the 2000s across all three categories. In fact, the most recent data show that the rural workforce now has a higher share with some college and associate’s degrees than the urban workforce.

Figure 2: Percent Change in College
Educational Attainment of Working-
Age Population from 2000 to 2008-12,
by Metropolitan Status

The slower growth in college completion may be due to several factors. Past research by Gibbs (1998) suggests that students in rural areas are equally likely as urban students to enroll in college, but less likely to complete college. A variety of factors could be at work to explain a lower rural college completion rate. Even though rural and urban students score about the same on achievement tests, rural students are less likely to have access to college preparatory classes (Greenberg and Teixeira, 1998). Lower family incomes in rural areas may make completing college more difficult, and it is likely true for many rural, college-bound students that travelling greater geographic distances puts a strain on finances and family ties.

Workers with a college education face lower unemployment rates than those without and, thus, have a greater likelihood of being employed (Figure 3). The fact that a higher level of educational attainment is associated with a lower likelihood of being unemployed gives additional evidence that the rural economy is increasingly favorable to those with college degrees. The unemployment data also show growing inequality in the employment experiences of rural Americans by education level. In other words, the recession significantly affected differences in unemployment rates by level of educational attainment. At the beginning of the decade, unemployment rates were much more similar for those with some college, an associate’s degree, or a bachelor’s degree or higher. Over time, the unemployment rates of these categories diverged, especially noticeable during the most recent recession. This phenomenon was also seen in metropolitan areas and underscores the importance of obtaining higher levels of education for workers to improve their economic outlook.

Figure 3: Unemployment Rates by
Educational Attainment for
Nonmetropolitan Workers over the
2000s 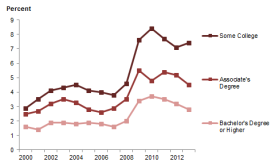 Examining the industries in which the college educated worked over the 2000s sheds light on the changing nature of the rural economy. Table 1 shows the share of rural workers employed in a given industry in 2012 for each of the three levels of college-level educational attainment and the percentage point changes between 2003 and 2012. A few clear patterns emerge.

First, a large portion of the employment by the rural workforce with a college degree is in the education and health services category. In fact, this is true for all levels of educational attainment, but to a lesser extent below a bachelor’s degree. This sector also shows an increasing share of the workforce being employed in it, which parallels the growth of education and health as industries in the rural economy as a whole (McGranahan, 2012).

The other industries with a large share of the 2012 workforce are manufacturing, and wholesale and retail trade. However, in contrast to health and education services, these are slow-growing or declining industries for most rural areas. If trends over the recent past continue, then more and more college-educated rural residents will find work in health and education, rather than manufacturing or wholesale and retail trade.

Challenges for the Future

Any improvement in the educational attainment of the rural population must take into account the mobility of the rural workforce. Rural workers continuously face a choice of finding work in their current area, moving to another rural area with better job prospects, or moving to an urban area. For those with a college education, moving to an urban area may be an attractive option when economic returns are considered (Domina, 2006). Median earnings in metropolitan areas are generally higher than in nonmetropolitan areas, especially for educational attainment at the high school diploma level and higher. Furthermore, the difference in earnings between nonmetropolitan and metropolitan workers increases with education (Marré, 2012). These earnings differentials exist despite the fact that unemployment rates are lower in nonmetropolitan areas. Research suggests that not only will rural workers with education beyond a high school diploma earn a higher initial wage upon moving, but that they will also experience faster wage growth over their working lifetimes (Glaeser and Maré, 2001).

Some rural communities are able to compensate for this difference by offering natural amenities or other nonmonetary benefits in terms of quality of life that draw in highly educated people (Deller, 2009; and Roback, 1982). Rural communities with high-quality schools have a better chance of attracting more highly educated parents because they may desire good schools for their children. Other research has shown that some rural places with scenic natural amenities are able to attract a “creative class” of highly educated entrepreneurs. Places without scenic amenities could potentially develop built capital that would attract in-migrants, too (Pender, Marré, and Reeder, 2012).

If there is a “rural renaissance” in store for the future, then education will almost certainly play a role. As the economy continues to change and reward a college education, rural America can build on the strengths it already has: a workforce increasingly getting the skills and training needed for this new economy. Industries that employed college-educated people in rural areas during the 2000s, especially education and health, seem poised for growth in the future. Rural communities can be prepared for these changes by building on existing assets, such as natural amenities or built capital, identifying ways to improve the skills of the existing workforce and attract college-educated workers, and looking for ways to connect skills with jobs in this changing economy.

Carr, P.J., and M.J. Kefalas. 2009. Hollowing Out the Middle: The Rural Brain Drain and What It Means for America. Boston: Beacon Press.