United States biofuel policy includes mandates that require that at least certain volumes of different types of biofuels are used domestically. The total mandate rises to 36 billion gallons in 2022, with increasing submandated usage of at least 1 billion gallons of biodiesel and 16 billion gallons of biofuels from cellulosic biomass and agricultural wastes. However, the most recent legislation setting out these mandates, the Energy Independence and Security Act (EISA) of 2007, gives the Administrator of the Environmental Protection Agency (EPA) the authority to waive one or more mandates. As shown here, the flexibility to waive submandates individually or in concert with broader mandates introduces uncertainty for biofuels and agricultural commodity markets in the future.

Biofuel mandates are directly relevant for biofuel producers, and indirectly important to feedstock markets. Biofuel refiners sell outputs that serve fuel blenders in two ways. The biofuel can be mixed with fossil fuels to generate fuels for sale in retail outlets, such as E10—with 10% ethanol—or B2—with 2% biodiesel. Blenders buy biofuels because they must meet their share of the national biofuel use mandate. If the mandated volumes are greater than the amount blenders would use otherwise, then the mandates are binding. In this case, blenders have to buy more biofuels, meaning more biofuels are made domestically or imported, so more corn, sugar cane, soybean oil, or other feedstocks are used for making biofuels.

The decisions of the EPA Administrator to waive mandates could affect the volumes of biofuels dramatically impacting commodity markets as well. In this paper, we focus on biodiesel mandates to show how the range of U.S. biodiesel use could vary by many billions of gallons from what is expected.

The Gaps in the Mandates

EISA establishes a number of mandates which act as government imposed minimum consumption levels for various biofuels. The mandates are comprised of a complicated hierarchy of submandates. The feedstock used in the production of a biofuel and the greenhouse gas (GHG) reduction score determines which of the mandates the biofuel satisfies. Two of these categories are the advanced mandate, which must reduce GHG emissions by 50% and cannot be produced from corn starch, and the total mandate, for which the fuel must reduce GHG emissions by 20%. 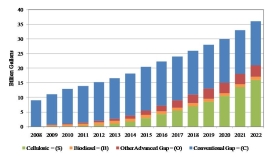 The advanced biofuels use mandate includes two submandates for cellulosic and bio-based diesel use. The bio-based diesel—biodiesel—mandate is required to increase to 1 billion gallons use in 2012, after which we assume it is held constant at that level. The mandate for biofuels made from cellulosic feedstocks and agricultural wastes—cellulosic—is required to increase to 16 billion gallons of use in 2022.

It should be noted that biodiesel has a 50% GHG reduction threshold which is the same as advanced biofuels, but cellulosic biofuels must achieve a threshold of 60%, in order to count against their submandate.

Under the EISA—and the preceding Energy Policy Act of 2005—the EPA Administrator may waive a required biofuels mandate if, after consultation with the Secretary of Agriculture, it is judged “that implementation of the requirement would severely harm the economy or environment” (Energy Policy Act, sec. 1501 para 7.A.i.). For the biodiesel mandate, the Administrator can modify the required volume if there is “a significant renewable feedstock disruption or other market circumstances that would make the price of biomass-based diesel fuel increase significantly” (EISA, sec. 202 para e.3.E.ii). Likewise, the EPA Administrator may waive the cellulosic mandate if the “projected volume of cellulosic biofuel production is less than the minimum applicable volume” (EISA, sec. 202 para e.2.D.i).

Waiving a submandate could affect the gaps defined above. Without any other change, a reduction in the cellulosic or biodiesel submandate would cause the advanced biofuel gap to rise. The EISA text recognizes this complication, but leaves its resolution to the EPA Administrator’s discretion in nearly identical passages which include:

This section of the law is relevant to assessments or predictions of biofuel use. Biofuel refinery owners, investors, or would-be investors must consider how mandates and also mandate waivers affect biofuel markets. These passages also indirectly impact corn and soybean farmers and all their input suppliers.

The consequences if the EPA Administrator waives the cellulosic mandate are shown in Figure 2. The mandates without waivers are shown at the left side of the figure. The total mandate (T) is shown first. Next, the submandated advanced biofuel (A) is shown, with the conventional gap stacked on top. Corn starch ethanol or extra advanced biofuel use beyond the mandated volume could be used to fill this gap. The third stacked bar on the left side shows the complete break-out of the submandates, with cellulosic (S) and biodiesel (B), other advanced gap (O), and conventional gap (C) all shown. (Note that this diagram is not to scale.)

Three options for waiving the cellulosic mandate (S) are also shown in Figure 2, each of which can be compared to the original unwaived mandate. These options are:

Waivers and options are not just thought experiments. The EPA Administrator has waived the cellulosic mandate. The Administrator chose option 2, but the volumes were small in the first two years. In consequence little notice has been given to the waiver decision even though, as shown in the next section, the implications for the biodiesel market could be important.

Biodiesel’s Competition with Other Advanced and Conventional Biofuels

Biodiesel helps to meet the submandate for advanced biofuel, but other advanced biofuels do not help to meet the biodiesel submandate. Likewise, biodiesel competes against corn starch ethanol to fill the conventional gap—at least theoretically—but the reverse is not true. Conventional biofuels do not meet the biodiesel mandate. In Table 1, we use this basic consequence of the mandate hierarchy and combine it with the EPA Administrator’s options to waive mandates in order to develop ranges of impacts on biodiesel use.

*The calculation of other advanced assumes that one gallon of biodiesel is counted as 1.5 gallons of ethanol (the "equivalence value").

The case is clearest when looking at the range of possibilities for 2022 in Table 1. The basic mandate would lead us to expect that biodiesel will be required to fulfill its own 1 billion gallon mandate. Taking into account the other mandates—and using the 1.5 equivalence value to make biodiesel comparable to other biofuels—the other advanced gap becomes 3.5 billion gallons. This requirement can be met by any combination of other advanced biofuels—such as sugar cane ethanol—and extra biodiesel or cellulosic biofuel beyond their required volumes. Biodiesel competes well in the advanced gap, at least under certain market conditions. Biodiesel can also compete with these same fuels and also with corn starch ethanol to fill the larger conventional gap, but it is more difficult to imagine biodiesel displacing large volumes of corn starch ethanol in the 15 billion gallon conventional gap.

If the cellulosic mandate only is reduced, then the other advanced gap expands—as shown in Table 1, option 2. This option increases the mandate-related market for biodiesel. Option 1, reducing all mandates, would lead to no change in the market for biodiesel. Option 3 increases the conventional gap, but not the other advanced gap, so biodiesel could only expand further if it competes favorably against corn starch ethanol—and that is a real possibility if the conventional gap increases substantially and drives up corn starch ethanol prices.

In Figure 3, numbers are converted into what they mean for biodiesel quantities by adjusting other advanced and conventional gaps for the 1.5 equivalence value. The results are shown for two years assuming the cellulosic mandate is waived, and the new value is one-half of the original target value. Biodiesel use will be used to meet the biodiesel mandate as long as it is not waived and will likely compete fairly well against sugar cane ethanol in the market to fill the other advanced gap.

Mandate-Related Markets for Biodiesel with Cellulosic Mandate Waiver Options, in Billions of Gallons of Biodiesel

Waivers are only one of several uncertainties relating to biofuel policy. The EPA Administrator can adjust GHG reduction targets of different mandates and, after 2012, the biodiesel mandate. The EISA itself may well be replaced by new law that raises, lowers, or radically alters the mandates. Apart from the mandates, biofuel policy in the United States also includes biofuel tax credits and ethanol tariffs that alternate between expiration and renewal. Commodity and renewable energy policy is one of many sources of uncertainty, as biofuel demand fluctuates with petroleum prices and feedstock markets must adjust to crop yield and other shocks.

Market players know about petroleum prices, crop yields, and similar factors and the biofuel tax credit and ethanol tariff have a history that provides some clues about what will happen as policy makers consider the next expiration deadline. However, the waivers provide a risk that we cannot assess based on historical events. The submandates are new and only now rising to volumes that raise the question of how the EPA Administrator’s decisions about waivers could affect markets.

Market agents who ignore this new uncertainty put themselves in peril. For example, the biodiesel mandate, often supposed to stay at 1 billion gallons, is not the upper bound on biodiesel demand given that biodiesel competes against other advanced biofuels, like sugar cane ethanol, to fill the advanced mandate. This potential market could increase if the EPA Administrator chooses to waive the cellulosic mandate while maintaining the other three mandates, potentially resulting in many billions of gallons more biodiesel use. Alternatively, the EPA Administrator could reduce the total and advance mandates by the same amount, leaving other mandate-related biodiesel markets unchanged, or the Administrator could allow more corn starch ethanol—more than the 15 billion gallon gap—against which biodiesel competes less effectively.

The example of cellulosic mandate waiver effects on the mandate-related market for biodiesel is shown. This example illustrates the range of uncertainty owing to the options to implement a mandate waiver. Uncertainty extends to other biofuel markets, including corn starch ethanol and sugar cane ethanol, and is transmitted via biorefinery feedstock demands to markets for soybean oil and soybeans, corn, sugar, and other agricultural commodities. Despite these wide ranges of possibilities, it is not clear if market agents have considered seriously how to take this uncertainty into account as they plan medium- and long-term investments such as in biorefinery capacity, seed technology, farm equipment, or farm land.

This study was funded in part by the Office of the Chief Economist, U.S. Department of Agriculture, under Agreement No. 58-0111-9-002, but views expressed are the authors� own, and may not reflect those of the USDA.