This article is part of a series of Policy Issues articles on Soda Tax. You can also find articles on Should Soft Drinks be Taxed More Heavily?, Can Taxing Sugary Soda Influence Consumption and Avoid Unanticipated Consequences?, Sugar-Sweetened Beverage Taxation as Public Health Policy-Lesson from Tobacco, Soda Taxes and Substitution Effects: Will Obesity be Affected?, Better Milk than Cola: Soft Drink Taxes and Substitution Effects, and Caloric Sweetened Beverage Taxes: The Good Food/Bad Food Trap as part of this theme.

As city, state and the federal governments consider excise taxes on carbonated soft drinks (CSDs) or sugar-sweetened beverages (SSBs) there has been extensive discussion in academia and by public interest groups regarding the efficacy of such policy. The discussion has focused primarily on two issues: what would be the effect of excise taxes on consumption and ultimately obesity; and would these taxes be equitable—or, to what extent would they be regressive? To date, there have been numerous studies that examine the demand for CSDs or SSBs. Although there is variation in demand estimates depending on the level of aggregation—product versus brand—and market definition—which products to include, the results suggest that such excise taxes, if passed on to consumers, would lower consumption and generate revenue. However, the taxes would likely be regressive. Smith et al. (2010) provide a thorough discussion of the issue and the various economic implications of taxes on CSDs or SSBs.

Missing from the discussion and analyses of excise taxes, however, is the consideration of other marketing mix variables, particularly advertising. Although price effects are of obvious importance, advertising plays a significant role in affecting consumer behavior, including consumer price response. As such, advertising of CSDs and SSBs will impact the outcome of excise tax policies. Failing to consider the role of product advertising, especially in markets that rely so heavily on horizontal differentiation across subjective characteristics, leads to an incomplete understanding of the implications of excise taxes.

Pervasiveness of advertising and brand identity

A common metric used to evaluate advertising is Gross Ratings Points (GRPs), which measure the percentage of audience reached by an advertisement times the frequency of the advertisement. Figure 1 plots weekly television GRPs for all Coca-Cola products from 2006-2008 for children under 12 and for adults. The steady stream of pulse advertising is apparent, with the summer months experiencing more frequency and the winter (February 2006) and summer (August 2008) Olympics having large spikes. Interestingly, Coca-Cola does not directly advertise to child-dominated audiences, according to their advertising pledge (Better Business Bureau, 2011). Yet the GRPs for children are persistent and tend to follow adult GRP trends. Clearly, CSD brand advertising is pervasive and is viewed by broad audiences, not just those who are directly targeted. 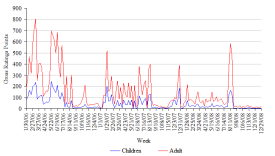 Television brand advertising has also been shown to create long-term brand identity as well. McClure et al. (2004) examined how Coke and Pepsi affected brain activity of volunteer subjects during a taste test. They found that tasting each soft drink activated reward areas of subjects’ brains that are associated with pleasure and satisfaction. More importantly, when participants were told they were drinking Coke, not only did the reward areas become active, but the memory regions of the brain as well. According to the researchers, “[Their study] showed that the brand alone has value in the brain system above and beyond the desire for the content of the can.” (Park, 2007). The effect of excise taxes on consumption will be influenced by such powerful brand identity.

Effect of Advertising on Demand

With such strong advertising efforts and the brand loyalty it creates, advertising of CSDs and SSBs can have a significant impact on the effectiveness of excise taxes. Obviously, many studies do not include advertising due to a lack of data. An important question, then, is what impact does the omission of advertising variables have on analyses of excise taxes?

Omitting advertising from empirical demand analyses will affect estimates of demand elasticity—the percentage change in quantity demanded corresponding to a percentage change in price—as advertising both shifts and rotates demand depending on the type of advertising (Johnson and Myatt, 2006). Erdem, Keane and Sun (2008) find that for 17 of 18 product lines, television advertising rotates demand counterclockwise—increasing demand elasticity—suggesting that advertising increases the number of consumers willing to pay for a particular product. The one exception where demand rotated clockwise, they suggest, was due to the industry having a few number of firms and greater emphasis on horizontal differentiation. Focusing explicitly on soft drink advertising, Zheng, Kinnucan, and Kaiser (2010) find that television advertising rotates the demand curve for soft drinks counterclockwise. The authors suggest that such advertising has its greatest appeal among consumers with low WTP for soft drinks.

Based on the existing literature, it is apparent that elasticity estimates that do not account for advertising will be biased. Consequently, so will the estimated impact of excise taxes. Further, it appears that the direction of the bias due to omitting advertising is unclear and should be determined by empirical analysis. Advertising for CSDs and SSBs may make the demand curve more elastic while also increasing demand if it recruits marginal consumers to begin consuming. Alternatively, since a few CSD firms have significant market share, advertising may be used for horizontal product differentiation and therefore make consumers more price insensitive.

It is possible to mitigate biased price estimates using existing econometric techniques such as instrumental variables which rely on replacing the price variables with acceptable substitute variables. There are two important shortcomings, however. First, from an econometric perspective, it can be difficult to find appropriate substitutes for prices. More importantly, instrumental variables estimates do not provide the same information as estimates of advertising and advertising-price interactions. That is, they do not answer what direct effect advertising has on demand and to what extent advertising impacts price effects.

Another issue to consider is that advertising can impact substitution patterns between products which are an important consideration when examining excise taxes, as consumers switch from one product to another (Fletcher et al. 2010). For example, Zheng and Kaiser (2008) find that advertising for soft drinks has a spillover effect on other beverage categories which impacts the degree of product substitution. Failing to account for how advertising affects switching behavior will misrepresent the impact of excise taxes on overall consumption.

There are also opportunities to use advertising to promote healthful alternatives. Previous literature on information campaigns finds that promoting healthful consumption has been shown to have an affect on consumer choices. For example, the 5-a-day campaign promoting consumption of fruits and vegetables is shown to increase consumption across numerous countries (Pomerleau et al., 2005; Capacci and Mazzocchi, 2011). Information campaigns are generally delivered using educational materials or other non-commercial media and venues (Pomerleau et al., 2005). Television advertising has the ability to reach a much larger audience than information campaigns. Promoting healthy foods using television advertising could enhance the effect of excise taxes by increasing substitution to more healthful alternatives.

There may be benefits from reducing or restricting advertising as well. The Children’s Food and Beverage Advertising Initiative (CFBAI) is a voluntary, industry lead program currently comprised of 17 large food and beverage companies who have volunteered to restrict advertising of unhealthful foods to children. The Interagency Working Group on Food Marketed to Children is a similar government lead initiative currently in development. Although there is no evidence of any short-term effect of restricting advertising to children, there may be long-term benefits to such efforts.

In the continuing discussion of excise taxes on CSDs and SSBs, it is important to understand what revenues will be generated by the taxes, who will bear the burden of the taxes and what effect, if any, they will have on consumption or obesity. Brand advertising has a clear effect on both consumption and consumer perceptions of brand identity. Given the high level of CSD and SSB advertising, it is essential to understand how advertising affects consumer demand for CSDs and SSBs.

Bagwell, K. (2007). The economics of advertising. In Handbook of Industrial Organization, vol 3. Ed by M. Armstrong and R. Porter.

Erdem, T., Keane, M.P., and Sun, B. (2008). The impact of advertising on consumer price sensitivity in experience goods markets. Quantitative Marketing and Economics, 6, 139-176.

Joshua P. Berning (Joshua.Berning@UConn.edu), is Assistant Professor in the Department of Agricultural and Resource Economics, University of Connecticut, Storrs, Connecticut.