Ex-Post Analysis of the 2018 and 2019 Market Facilitation Programs

Ex Post Analysis of the 2018 and 2019 Market Facilitation Programs

In late 2019, after decades of bilateral trade liberalization, and following 18 months of escalating retaliatory tariffs (see Box 1), the U.S. and China reached agreement on the first phase of a trade deal, the details of which were made public in January 2020. The Chinese government agreed to purchase substantial amounts of U.S. goods, including $32 billion of agricultural products (Lawder at al., 2020). Prior to this agreement, U.S. agricultural producers had suffered severe economic losses as a result of the retaliatory tariffs implemented by several governments and the U.S. government had established programs of direct payments to producers to offset these losses. The Market Facilitation Program (MFP) was first implemented in 2018 and a second version of this program was established in 2019. The purpose of this article is to compare the 2018 and 2019 Market Facilitation Programs in 14 Midwest and Plains states.

Comparisons of the Two MFP Payments

It is not possible to directly compare the two versions of the MFP because the compensatory payments are based on different criteria. In 2018, the payments were tied to the production of a limited set of specific crops with compensation equal to a set of crop-specific payment rates multiplied by actual output. In 2019, set payments for each county were calculated on the basis of the total number of acres planted to eligible non-specialty crops (corn, sorghum, soybeans and 24 others). The change in the bases for the payment calculations was made to avoid incentivizing increased production of a particular crop over others. One way to get a sense of the different effects of these two programs is to consider a hypothetical grower producing either corn or soybeans in both years. In 2018, this hypothetical producer received a payment based on a payment rate tied to a particular commodity such as corn or soybeans times the number of bushels produced while in 2019 the producer received a payment based on the total number of acres planted in 2019 to any of the eligible non-specialty crops, which include corn and soybeans, times the county rate based on a broader set of commodity damages. In the following analysis, we will compare the payments received by this hypothetical corn or soybean producer, who produced the same crop (corn or soybean) on a per-acre basis (i.e. for one planted acre of corn or soybean) in both years.

There were some similarities between the programs. For both years:

Aside from the differences in the way payment rates were calculated there were three other important differences:

To differentiate the payments by commodity, we use 2019 yields to compare the differences in received MFP payments for the two years by producers of different regions and commodities. Giri, Peterson, and Sharma (2018) found that 2018 payments, for those who received them, exceeded the impacts of price declines from the retaliatory tariffs. In terms of market access Carter and Steinbach (2020) and Grant et al. (2020) estimated export sales losses in line with MFP trade damage estimates. Paulson et al. (2019) compared the 2018 and 2019 program impacts on county farm income but they did not use 2019 yields to generate comparable measures for the two years and did not differentiate returns by commodity. Using 2019 yield and the 2018 MFP structure to calculate the payments under the previous MFP model helps one compare whether a producer of a certain crop in a certain region received smaller or larger payments per acre in 2019 under the new MFP payment structure. There have been no studies that develop equivalent measures of the two payment approaches that would allow a full comparison of the payment amounts received by particular producers under the two programs. In this paper, we compare the 2018 and 2019 payment rates received by corn and soybean producers in the two years as well as the percentage change from 2018 to 2019 at the county level for 14 Plains and Midwest states. The 2018 MFP payment rate was calculated on a per-unit basis with differing commodity-specific rates. The 2019 rates were the same for all commodities and based on the number of acres planted to a more expansive set of commodities. To make them comparable we calculate the per acre payment received under the 2018 MFP for corn and soybeans (per-bushel payment rate under 2018 MFP times the yield). 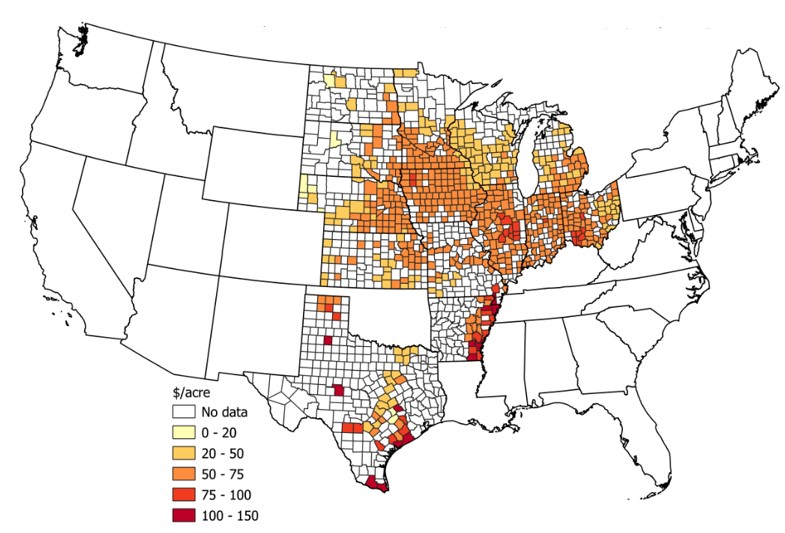 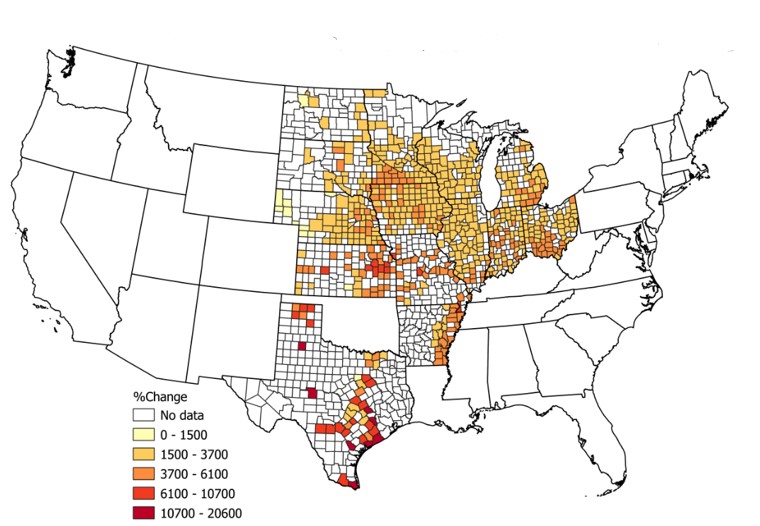 More specifically, the calculations used for this study are:

There were 706 counties in the 14 states for which data on payments to average producers who produced corn (but also could have grown other crops) for both 2018 and 2019 were available to make the comparisons (i.e. NASS had reported corn yield for 2018 and 2019 implying that there were corn producers in that county although the set of corn producers in the county may have differed). Figure 1 shows the changes in dollar payments for producers on a per acre basis from 2018 to 2019, while Figure 2 shows the percentage change in payments per acre for the same set of counties. All the county average payment rates increased in 2019 compared to 2018. The lowest increase, measured in dollars per acre, was for producers of Mountrail County, North Dakota ($13.94), and the lowest increase, measured in percentage change, was for producers of Deuel County, Nebraska (753%). 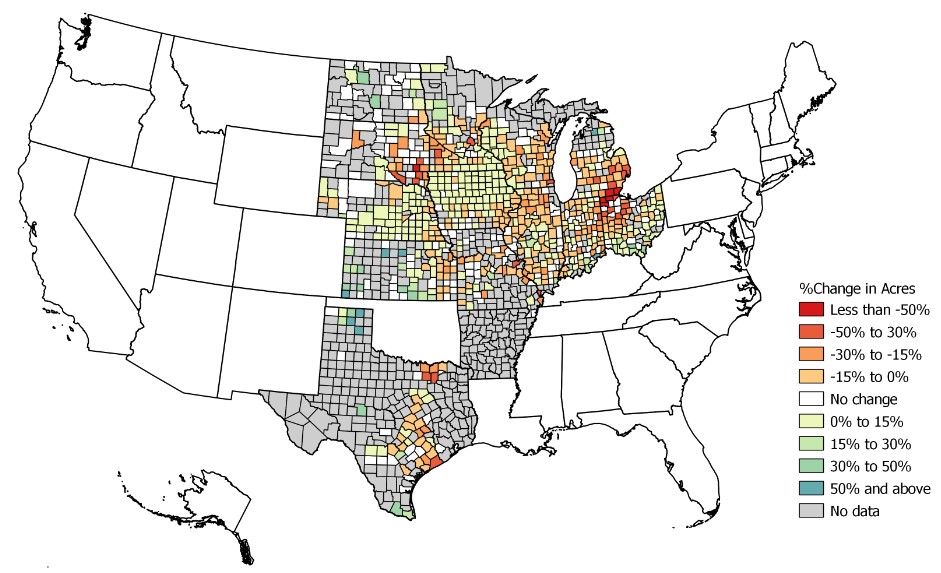 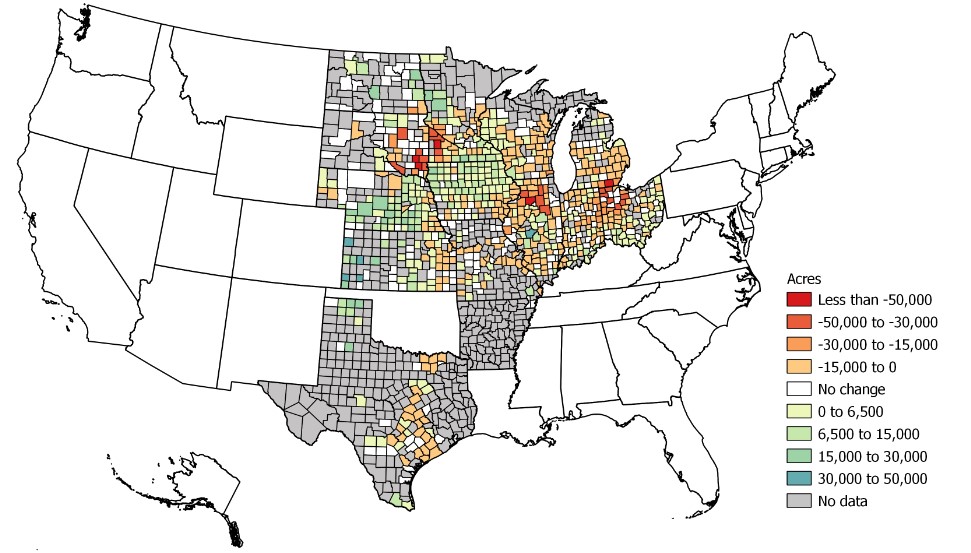 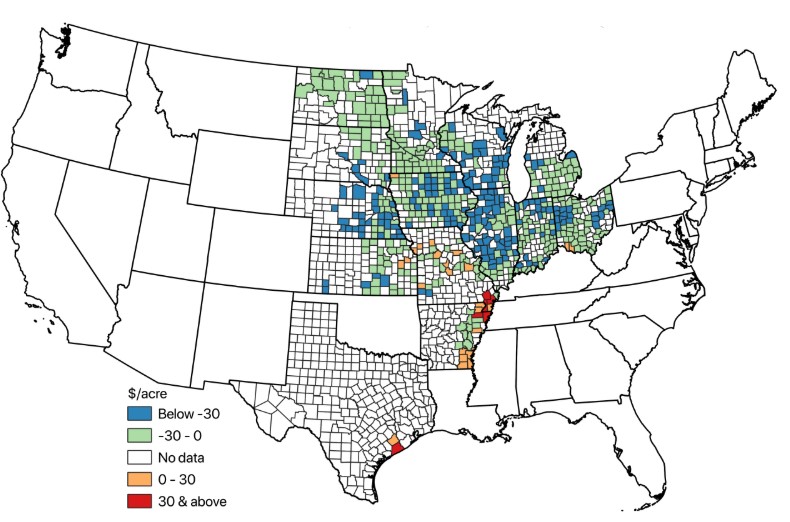 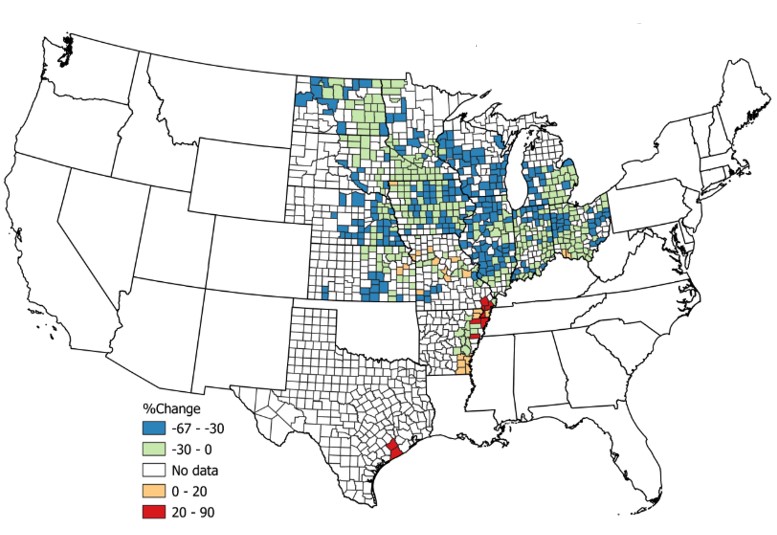 It is not feasible to report results for all 706 counties so in Table 1 we report the top and bottom ten counties in terms of the change in payments from the two programs. Producers in counties with lower average corn yields saw the highest increase in the payments per acre because the 2018 payment was based on total production and the per unit MFP payment rate by commodity, whereas there was a flat rate for 2019 irrespective of the commodity. From Table 1, it is clear that the bottom ten counties are those that had a lower 2019 MFP payment rate. Note that for the top ten counties producers did not receive the maximum payment ($150/acre). Instead, these are the counties with the greatest change in payment rates from 2018 to 2019. Some counties had low planted acres and/or yield and producers in those counties received large increases in payments per acre, on average, in 2019 compared to 2018 because of the shift to flat county rates.

It is important to note that the counties in Table 1 are not in major corn producing states. Furthermore, it should also be noted that weather problems and flooding in 2019 delayed and prevented planting in many of these states which may have affected the planted acres.  For the entire United States, there does not seem to have been a significant change in total planted acres for corn in 2019 compared to 2018 even though producers who planted corn received larger MFP payments. Total planted corn acres in the United States increased slightly in 2019 (89.75 million) compared to 2018 (88.87 million) (U.S. Department of Agriculture, 2020c). The additional 874,000 acres in 2019 represented only about a one-percent increase compared to 2018.

We examine the changes in planted acres at county and state level for the 14 states. Figures 3 and 4 show the percentage and acres change in corn planted acres for the 14 states. For some states such as Iowa, Kansas, Nebraska, North Dakota, and Texas acreage increased, with Texas registering the highest increase (13%). In others, Illinois, Indiana, Michigan, Minnesota, Missouri, Ohio, South Dakota, and Wisconsin acreage fell, with Michigan reporting the largest decrease (11%). Among the top counties, Scott, Kansas registered the largest increase in planted acreage between 2018 and 2019, 44,200 acres (49%) while McCook county, South Dakota had the largest decrease in acreage 77,330 acres (64%). Extensive flooding in South Dakota resulted in 3.9 million acres of prevented planting and this may have contributed to the large decrease in acreage for this county (Farm Bureau 2019).

Average nominal corn prices increased over the most recent three years, from $3.36 per bushel in 2017 to $3.85 in 2019, and these price increases may have played a role in the anticipated acreage increase (U.S. Department of Agriculture, 2020c). Corn acreage in 2019 had been expected to increase even before the announcement of the MFP payments because relative prices and expected returns favored corn over soybeans (Rook 2019).

There were 564 counties in the 14 states for which data for both 2018 and 2019 were available to compare payment rates to producers who had planted soybeans. As noted before these producers may also have planted other crops. Figure 5 shows the changes in dollar payments on a per acre basis for the producers from 2018 to 2019, while Figure 6 shows percentage changes for the same counties. Unlike producers who had planted corn both years, not all producers who planted soybeans both years received an increase in MFP payments per acre in 2019 compared to 2018. In fact, in only 32 counties did producers receive higher payment rates. The largest increase was for producers in Dunklin County, Missouri ($54.54, or 77%). The greatest decrease was for producers of Grant County, Wisconsin (-$60.45 or -58%).

Table 2 lists the ten counties in which producers received the greatest increase in payments and the ten counties in which producers received the greatest decrease in payments for soybeans. Producers in Grant County, Wisconsin, saw the largest decrease ($60.45) in MFP payments per acre. Put in bushel-equivalent terms, at $9 per bushel for soybeans the difference in payments would be equivalent to a decrease in yield of almost seven bushels per acre. Conversely, in Dunklin County, Missouri, producers received $54.44 more per acre in MFP payments compared to 2018. It is important to note that these states are not the major soybean producing states.  Total planted soybean acres in the United States decreased in 2019 (76.10 million acres) compared to 2018 (89.17 million acres). 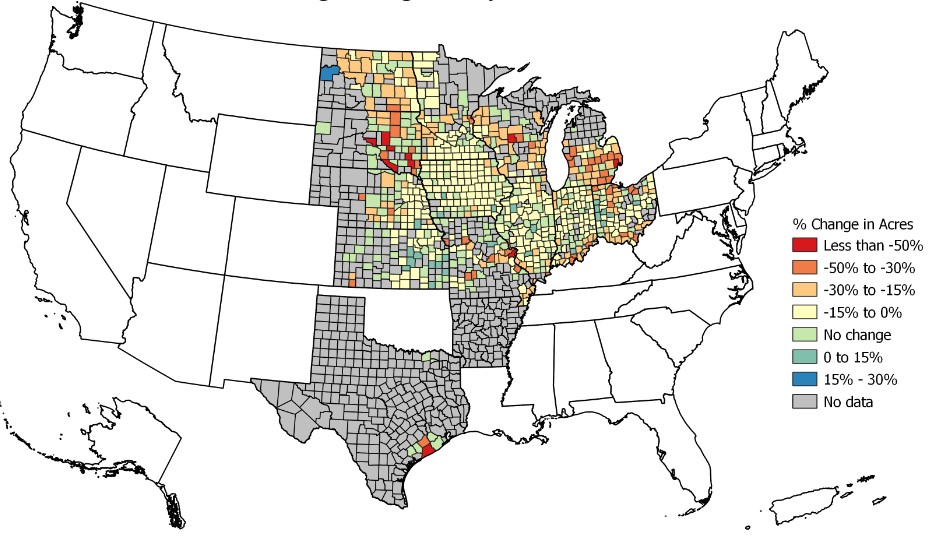 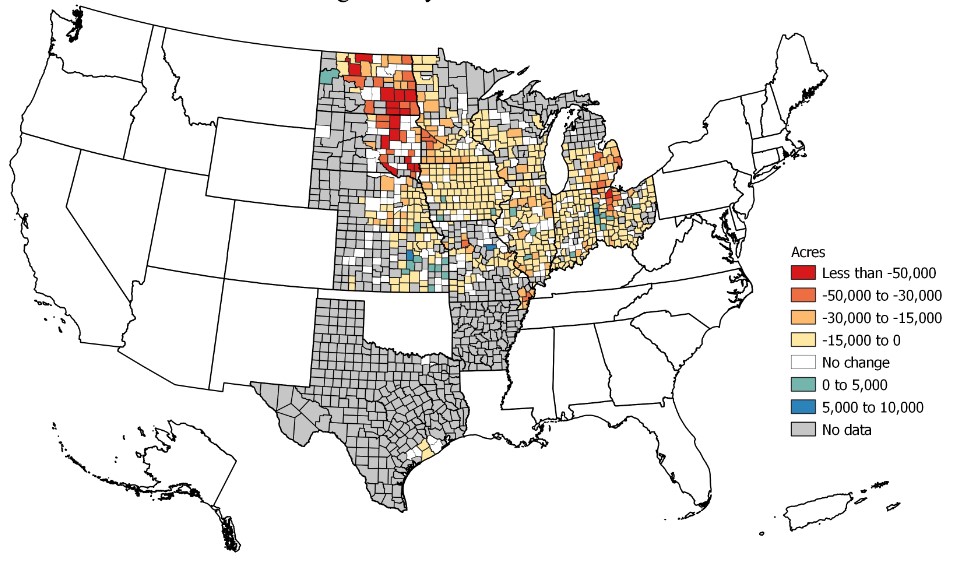 Examination of the soybean planted acres for the 14 states, we find that acreage fell in all prominent soybean producing states, with Texas registering a 54% decline and South Dakota a 28% decline. Audrain County, Missouri registered the largest increase (10,000 acres; 6%) and Brown County, South Dakota saw the largest decline (133,500 acres; 36%) compared to 2018. Figures 7 and 8 shows the percentage and acres decrease in planted soybean acres for the 14 states. Based on data from the U.S. Department of Agriculture (2020c), the nominal price received per bushel of soybeans was $ 9.33 in 2017, $8.48 in 2018, and $8.75 in 2019. The prices in 2018 and 2019 were still lower than 2017 price which could have led to producers planting less acres.

The 2018 MFP payment rates were relatively higher for soybean and sorghum because those commodities were particularly hard hit by the Chinese retaliatory tariffs. About half of U.S. soybean production is exported, and China accounted for 57% of U.S. soybean exports in 2017. Likewise, some 56% of U.S. sorghum production was exported in 2017 and 81% of total U.S. exports were shipped to China in that year (Zheng et al., 2018). U.S. soybean exports to China were valued at $10.5 billion in 2016 and $12.2 billion in 2017, falling to only $3.1 billion in 2018 as a result of the trade war (Choe, Hammer, and Montgomery, 2019). In 2019, soybean exports to China rebounded somewhat, to $8.0 billion although they were still well below levels reached in 2017 (U.S. Department of Agriculture, 2020a).  The 2018 MFP rate for corn was lower because U.S. corn exports faced lower retaliatory tariff exposure. These lower rates were attenuated in 2019 as the flat per acre payment rate, which resulted in a higher payment rate for some corn producers while the payment rate for some soybean producers increased by much smaller amounts or, in many cases, was lower. The higher amounts received may reflect the fact that by 2019, the list of agricultural products subject to Chinese retaliatory tariffs had expanded substantially, extending payment eligibility to producers of other crops. Virtually all U.S. agricultural exports were affected by the tariffs in 2019, although the degree to which products were affected varied greatly.

The largest increases in payments per acre were received by corn producers in Texas and Arkansas, neither of which are large corn producing states, and the higher 2019 county rate was likely the result of those counties also producing cotton or sorghum, which had higher commodity rates. Conversely, some of the counties that saw “lower” 2019 MFP rates likely had acreage of non-specialty crops like barley or oats which had not faced export exposure to the retaliatory tariffs.

Carter, C.A. and Steinbach, S., 2020. The Impact of Retaliatory Tariffs on Agricultural and Food Trade (No. w27147). National Bureau of Economic Research.

Rook, Michelle 2019. “Acreage Shift Expected for 2019. The Question is How Much?” AGWEEK, January 7. Available online:  https://www.agweek.com/business/agriculture/4551873-acreage-shift-expected-2019-question-how-much