Lack of Information Is the Root of U.S. Foodborne Illness Risk

In 2011, President Obama signed the Food Safety Modernization Act, and the Food and Drug Administration (FDA) has proposed new regulations. FDA understands that limited information about pathogens in food is the root of the food safety problem:

“In an idealized perfectly competitive market in which consumers and producers both have sufficient information, the optimal level of production of foods that are manufactured, processed, packed or held by food facilities will be provided at an optimal level of safety. In real markets, however, consumers and producers may not have sufficient information on the safety attributes of foods….Currently, the legal system does not ensure the optimum level of safety for foods because consumers who become ill often do not know the reason for, or source of, their illness. Even in cases where consumers are aware that their illness was contracted from a specific food, it is often difficult to determine who is ultimately responsible for their illness, since the particular source of contamination is not known in many circumstances…. In sum, the imperfect information about the risk associated with food covered by the regulation means that neither the legal system nor the marketplace may be able to provide adequate economic incentives for the production of safe food. The Government may therefore be able to improve social welfare through targeted regulation.” (FDA, 2013, pp. 2-3).

The cornerstone of the food safety problem is that consumers cannot detect pathogens by either sight or smell. Lack of information is a serious problem for preventing and treating acute foodborne illness caused by pathogens, but it is even more challenging to link the Long Term Health Outcomes (LTHOs) associated with acute foodborne illness to the causative food source.

In 2011, the Centers for Disease Control and Prevention (CDC) updated its estimates of foodborne illness by reviewing medical databases that included foodborne illness symptoms (Scallan et al., 2011a, b). The CDC estimates that foods consumed in the United States cause 47.8 million acute illnesses annually. The CDC acknowledges that these acute foodborne illnesses can cause Long Term Health Outcomes, but does not identify or quantify LTHOs.

Table 1
Estimated Annual Number of Episodes of Domestically Acquired Acute Illness, Hospitalizations, and Deaths Transmitted Through Food, United States1
1 For the 31 major pathogens that cause 20% of the illnesses, CDC estimates the illnesses, hospitalizations and deaths for each pathogen.  Major known pathogens are 21 bacteria, 5 parasites, and 5 viruses.
2 For the unspecified pathogens causing 80% of the illnesses, the total cases of foodborne illness, hospitalizations and death are estimated for the group, based on medical databases. CDC estimates that 250 pathogens can cause foodborne illness.
Sources: Data from Scallan et al. 2011a and b

In 2013, CDC published a landmark study analyzing foodborne illness outbreaks from 1998 to 2008 with an implicated food vehicle and a pathogen (Painter et al., 2013). In this 11-year period, the CDC confirmed only 271,974 outbreak illnesses where the food vehicle was identified with a single pathogen. These outbreaks encompass both those with a “confirmed” food source as well as outbreaks with a “suspect” food source. However, foodborne illnesses discovered in outbreaks are only a small percentage of all the total cases of acute foodborne illness. Painter et al. (2013) state: “…attributing all illnesses to specific foods is challenging because most agents are transmitted through a variety of foods, and linking an illness to a particular food is rarely possible except during an outbreak.”

Physicians and epidemiologists know that foodborne pathogens can cause acute illness, and by the 1980s, physicians became aware that acute foodborne illness can extend to a variety of LTHOs. These human LTHOs are a varied group and have no known cause, or a range of causes. Two common pathogens, Salmonella and E. coli O157:H7, illustrate two routes for discovering LTHOs of foodborne pathogens. Note that these discoveries occurred while epidemiologists were investigating acute foodborne illness outbreaks and their outcomes.

Scientific research has established that most foodborne pathogens have LTHOs that can have a wide range of health outcomes, some with life-long consequences (Roberts, Kowalcyk, and Buck, 2011). The range of LTHOs is very diverse: infections of the heart, brain, lung, gall bladder, spleen, intestines, muscles, pancreas, nervous system, and blood. Based on self-reported survey results from residents of Minnesota and Oregon who suffered a foodborne illness, links to reactive arthritis symptoms were established. The results, by pathogen, are: Salmonella (15%), Yersinia (14.3%), Campylobacter (12.7%), Shigella (9.7%), and E. coli O157:H7 (8.9%) (Townes et al., 2008). In addition, another study provided data on reactive arthritis and the probabilities of life-long joint or back pain (Raybourne et al., 2000).

Adult cases of mental illness in several countries have been linked to the parasite, Toxoplasma gondii. The epidemiology gold standard for making these linkages is a prospective study where an exposed cohort is followed over time to document what illnesses they develop in comparison to a non-exposed cohort. Several studies in the United States and Europe have examined patient levels of T. gondii antibodies relative to their risk for various mental health conditions, such as schizophrenia (Pedersen et al., 2011 and 2012, and Flegr, 2013). The two primary sources of T. gondii for human illness in the United States are lightly cooked meats—primarily pork, lamb, and venison—and exposure to cat feces (CDC, 2013). Half of the human cases of toxoplasmosis are estimated to be foodborne (Scallan et al., 2011b).

In 2012, Racicot Bergeron et al. published a path-breaking study linking chicken to human urinary tract infections (UTIs). Extraintestinal pathogenic E. coli (ExPEC) causes the majority of UTIs in the United States. Given the statistically significant genetic similarities between human and chicken E. coli isolates, the researchers concluded that “….ExPEC transmission from food animal sources is likely to be implicated in human infections and that chicken is a major reservoir” (Racicot Bergeron et al., 2012).

A 2011 Government Accountability Office (GAO) report found several pathways whereby antibiotic-resistant bacteria spread from animals to cause diseases in humans. The annual report of the National Antibiotic Resistance Monitoring System revealed “…more than half of samples of ground turkey, pork chops and ground beef collected from supermarkets for testing by the federal government contained a bacteria resistant to antibiotics…” (Strom, 2013). 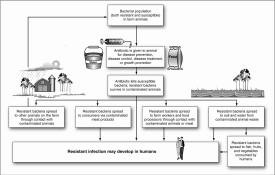 For all three of these recent LTHOs, it is not yet possible to estimate what percent are caused by food. However, the study on UTIs illustrates that pathogen testing data can indicate what pathogens are in foods in production and in the marketplace. This information could be used to alert consumers, industry, and regulators to take actions to reduce contamination or take precautions to avoid the product.

LTHOs Are a Significant Social Cost

In 1997, Buzby and Roberts compared the costs of acute foodborne illness vs. LTHOs for several foodborne pathogens. For some pathogens, the LTHOs are more costly than the total for acute illness and death.  In 2012, Hoffman, Batz, and Morris estimated that 14 foodborne pathogens caused $14.1 billion in the cost of illness, and loss of over 61,000 Quality Adjusted Life Years (QALYs) annually. Also in 2012, Scharff estimated the annual cost of U.S. foodborne illness from $51 billion to $78 billion using two estimation methods based on cost of illness and monetized QALYs. Both 2012 studies included a few LTHOs in their estimates.

In 2013, FDA’s Preliminary Regulatory Impact Analysis for the Food Safety Modernization Act proposed regulations for processed foods evaluated only three LTHOs for foodborne pathogens: paralysis for Campylobacter, kidney failure for E. coli O157:H7, and  reactive arthritis for three pathogens (FDA, 2013). Reactive arthritis is estimated to cause illness for only one year, however, which excludes the longer term outcomes experienced by some Canadian Mounties five years after acute salmonellosis (Thomson et al., 1995).

For the three recently discovered LTHOs discussed above, the percentage attributed to food is unknown today. But each imposes substantial costs on society:

In conclusion, while LTHOs are relatively rare, their potentially life-long impacts can be more costly than acute illnesses and deaths for a particular pathogen (Buzby and Roberts, 1997). Economists need to take LTHOs seriously, especially since scientific discoveries keep expanding the list of foodborne LTHOs.

The public good aspect of food safety is heightened by the lack of information about acute foodborne illnesses caused by pathogens and the associated LTHOs. But is this a problem that the United States public wants addressed? What options are available to deal with this issue? Three pieces of evidence indicate that the public wants more food safety:

Government, industry, and consumers cannot make well-informed decisions about food supply risks if only 0.05% of foodborne illnesses are linked to the food and the pathogen. There are actions that could improve information in the marketplace, and these would improve efficiency if the costs of the information are offset by the reduction in foodborne illness. There are several options for improving information on pathogens in the U.S. food supply chain:

Option 2: Another option is to create a new farm-to-table database to trace types of pathogens to specific farms, food companies, and products, hopefully with the cooperation of industry and inclusion of company data. Such a database with “blinded” company data is valuable input for industry in its standard-setting activities for pathogens in supplier contracts and in monitoring a company’s own performance. A paper in the prestigious journal, Proceedings of the National Academies of Science, analyzes how new pathogen testing technologies can better identify the pathogen strains in the food sources causing an outbreak (Eppinger et al., 2011).

Option 3: A more limited option that relies on improving the legal liability system is legislation to create a national product liability database to document the outcomes of all product liability court cases, including out-of-court settlements for foodborne illness cases (Buzby, Frenzen, and Rasco, 2001). Repeat violators could then be identified to some extent and class action suits be based on out-of-court settlements for cases initially brought to the court. This action would increase economic incentives for greater industry control of foodborne pathogens.

Option 4: Creation of a Cabinet-level Consumer Protection Agency was proposed as early as the Johnson Administration when Esther Peterson was the White House Consumer Advocate (NBCNews, 2013). If a Cabinet-level position, or perhaps an independent agency, were created, this Consumer Protection Agency could promote and oversee collection of pathogen data in the U.S. food supply.

Two overarching questions remain. Which of these four options is most likely to be most cost-beneficial to the U.S. economy? Option 1 may be the easiest to implement, since the structure already exists in IFSAC. However, are there other, more pressing uses of the taxpayers’ money that are more cost-beneficial? The lack of information linking pathogens to the U.S. food supply cannot be denied as only 0.05% of current human acute illnesses can be linked to pathogens today. LTHOs, which can be as economically important as acute illnesses, have an even more tenuous link to the food that causes the illness. Information is a critically important method of improving food safety incentives and promoting efficiency in controlling pathogens in the U.S. food supply.

Flegr, J. (2013). Review: influence of latent Toxoplasma infection on human personality, physiology and morphology: pros and cons of Toxoplasma-human model in studying the manipulation hypothesis. The Journal of Experimental Biology, 216(1), 127-133.

Tanya Roberts (tanyaroberts@centurytel.net) is retired from the Economic Research Service, U.S. Department of Agriculture, Washington, D.C., and is Chair of the Board of Directors, Center for Foodborne Illness Research and Prevention, Raleigh, N.C.