The Critical Access Hospital (CAH) program has represented one of the biggest changes in rural health policy. Introduced by the Balance Budget Act of 1997, the CAH program was created to preserve access to primary and emergency care services in isolated rural areas by improving the financial conditions of CAH hospitals and preventing some closures. We examine the evidence to date about CAH program performance in the areas of revenue, profitability, quality, and efficiency to evaluate the program’s effectiveness. The evidence provides some important lessons for evaluating how new federal health care policy changes will impact future rural hospital effectiveness.

In 1983, Medicare switched from cost-based reimbursement to the Prospective Payment System (PPS) in an attempt to control health care costs. Small rural hospitals were particularly vulnerable to the PPS—which pays a fixed fee per case—and commonly failed to cover costs on Medicare patients (McNamara, 2009).

The program reimburses CAH hospitals for the total cost of providing services to Medicare beneficiaries—cost-based reimbursement—provided the hospitals meet several requirements before conversion. These requirements are: They must be located at least 35 miles by primary road, or 15 miles by secondary road (necessary provider hospitals were excluded from requirement prior to 2006), from another hospital; must have no more than 25 acute-care beds; annual, average length of stay cannot be greater than four days; and must provide 24-hour emergency care services. The CAH program has grown rapidly from 41 hospitals in 1999 to 1,055 hospitals in 2005 and to 1,327 CAHs in 2011.

With many rural hospitals shutting their doors prior to the creation of the CAH program, Medicare cost-based reimbursement saved many small rural hospitals from closure and maintained adequate access to care in isolated areas. The Medicare Payment Advisory Commission (MedPAC), however, argues that not all CAHs are essential for access (MedPAC, 2012). Before January 2006, states could waive the distance requirement and qualify a hospital for CAH conversion based on state criteria that declared the hospital a necessary provider. Thus, 16% of CAHs are less than 15 miles from the nearest hospital, 67% are between 15 miles and 35 miles from the nearest hospital, and 17% of CAHs are 35 miles or more from the nearest hospital (MedPAC, 2012). Further, the Commission cautioned that Medicare cost-based reimbursement may provide a disincentive for CAHs to control costs and operate efficiently (although these hospitals must control costs on non-Medicare patients). 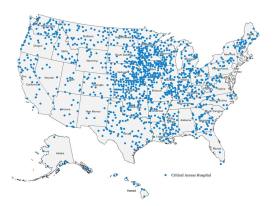 After conversion to CAH status, hospitals have generally experienced significant improvements in their finances due to enhanced Medicare reimbursements. MedPAC (2005) estimated that CAHs improved their profit margins from -1.2% in 1998, before conversion, to 2.2% in 2003, after conversion to CAH status. For similar rural hospitals that did not convert to CAH status and remained PPS hospitals, profit margins declined from 2.2% in 1998 to -0.2% in 2003. Medicare cost-based payments were roughly $3 million per CAH in 2003, about $850,000 more per hospital than if CAHs would have received PPS payment rates. In the 2012 Report to the Congress, MedPAC advised that CAHs’ total payments amounted to $8 billion in 2010, roughly $2 billion higher than they would have been under PPS.

Li, Schneider, and Ward (2009) found that hospitals converting to CAH status in Iowa improved their financial performance as shown by increases in operating revenues, expenses, and margins. Likewise, Schoenman and Sutton (2008) found that CAHs’ total margins significantly increased after conversion. They also found that CAHs reduced their number of beds by roughly one-third—a one-time reduction occurring at the time of entry into the CAH program—while the number of full-time equivalent (FTE) employees decreased significantly in the second year following conversion. Nevertheless, total salaries paid by CAHs increased after conversion, driving up the average salary per FTE by roughly one-third. Schoenman and Sutton (2008) also reported a dramatic increase in average revenue per bed for CAHs during the year of conversion (resulting from a combination of increased revenue and reduced number of beds), followed by modest increases in the years following conversion.

An additional goal of the CAH program has been to improve health care quality. Casey and Moscovice (2004) found that enhanced Medicare reimbursement allowed CAHs to fund additional staff, staff training, and equipment to improve patient care. Li, Schneider, and Ward (2007) concluded that CAH conversion was associated with improved hospital patient safety. Additionally, Nedelea and Fannin (2013) showed that CAHs’ technical efficiency was positively associated with a couple of quality-of-care best practices measures. Despite these quality improvements, previous research has shown that many rural patients “bypass” their nearby CAHs. For example, Liu, Bellamy, and McCormick (2007) found that over half of surveyed patients bypassed their local CAH for inpatient care, with bypass rates ranging between 16% and 70% across CAH service areas. Likewise, Gowrisankaran et al. (2011) estimated that CAH conversion was associated with a 28% reduction in the volume of patients admitted, with patients “willing to travel significant distances to avoid visiting a CAH hospital.”

The cost-based reimbursement of CAHs reduces incentives at cost containment and reduces cost efficiency. However, when you break down cost efficiency into technical efficiency and allocative efficiency, a more subtle result is uncovered (Nedelea and Fannin, in press). First, CAHs’ technical efficiency increased relative to the pre-conversion period and CAHs were no less technically efficient than non-converting, PPS rural hospitals. Second, rural hospitals that converted to CAH status were less allocatively efficient than their PPS rural hospital peers. Some CAHs have invested in new or upgraded facilities and equipment after conversion. These costs are considered part of the reasonable cost of care and can be billed as part of the overhead cost over time to deliver CAH health services. The increased capital costs, relative to labor, are one of the explanations for reduced allocative efficiency. To the extent these upgrades were one-time expenses, allocative efficiency reductions may decrease over time as depreciation costs of these  inputs diminish. Further, if equipment upgrades result in improved diagnosis and patient care, we may see a feedback effect in improved technical efficiency over time. That is, if the $450,000 in increased CAH inefficiency costs are due to increased capital investments such as improved equipment, this perceived inefficiency may result in increased quality of care and perhaps less bypass over time.

The CAH program has been able to improve the financial condition of rural hospitals and likely resulted in many rural and remote regions of the United States maintaining life-saving in-patient health care options where they would not otherwise exist. Further, the increased inefficiency of CAHs has been driven by strategic investments in depreciated facilities and equipment. The CAH experience has some implications for how rural hospitals will adjust to the Patient Protection and Affordable Care Act, or commonly referred to as the Affordable Care Act (ACA) or “Obamacare”.

ACA has many dimensions, but its financing strategy for providing more Americans health insurance coverage is likely to have the greatest impact on rural hospitals. First, the program may or may not measurably change the patient mix for rural hospitals, but it is likely to change the proportion of payment mix of rural hospital admissions because ACA is expected to bring in a higher portion of previously uninsured Americans under Medicaid. In the recent past, the percent of Medicaid admissions had a positive effect on cost efficiency. An increase in the CAH hospital admissions paid by Medicaid are expected to at least maintain existing cost efficient behavior and possibly increase revenues for CAH hospitals if these same admissions were previously uncompensated care for emergency room services in these hospitals.

There will likely be a dichotomy in performance of CAH and other rural hospitals based on differing applications of ACA by the states. Given the choice provided to states by the Supreme Court (in the case decided on June 28, 2012, National Federation of Independent Business v. Sebelius) on whether to expand Medicaid eligibility, we are likely to see differences in the admission payment mix with those CAH hospitals in states adopting the Medicaid expansion relative to states choosing not to expand Medicaid. Both the state’s Medicaid coverage decision and differences in the state and federal health exchanges are likely to impact revenue, profitability, and quality. Increased revenue generation from a higher proportion of insured patients from ACA may help provide further acute-care sustainability in rural regions. At the same time, CAH hospitals will have to highlight the quality of their services to compete and avoid patients bypassing their local rural hospitals for larger regional hospitals.