Sweeteners May Leave a Sour Note on NAFTA Renegotiations

On May 18, 2017, the Trump administration notified Congress of its plans to renegotiate the 23-year-old North American Free Trade Agreement (NAFTA), whose partners include Canada, Mexico, and the United States (U.S. Trade Representative, 2017). In general, any notification to Congress is followed by a 90-day period of consultation between Congress and the U.S. Trade Representative (USTR) (U.S. Trade Representative, 2017). Mexico expects the NAFTA renegotiation to be completed by the end of 2017, before Mexico’s next general election in July 2018 (Rampton, 2017). However, many experts believe that it may take longer to reach agreement among the NAFTA partners.

In light of the renegotiation, it is important to understand and highlight potentially thorny issues that may crop up among NAFTA partners. This article focuses on the sweetener trade between the United States and Mexico and includes a timeline of historical disputes. Sugar, high fructose corn syrup (HFCS), and glucose constitute approximately 93% of total sweetener consumption in the United States (Lakkakula, Schmitz, and Ripplinger, 2016), with other sweeteners—such as honey, maple syrup, and artificial sweeteners—accounting for the remaining 7%. In this article, “sweeteners” refers mainly to sugar (derived from cane and beets) and HFCS unless otherwise stated.

In order to understand NAFTA, it is important to note its origins. NAFTA came into effect on January 1, 1994. As part of NAFTA, tariffs were reduced on U.S. sugar imports exceeding predetermined volumes from Mexico. For more information on phased-out tariffs, see Haley and Suarez (1999). Essentially, NAFTA served as a transition phase (between 1994 and 2007) for the integration of the North American market. However, sugar and sweeteners are the least integrated sector compared to other major agricultural sectors, due mainly to the influence of U.S. and Mexican sugar lobbies (Hendrix, 2017). 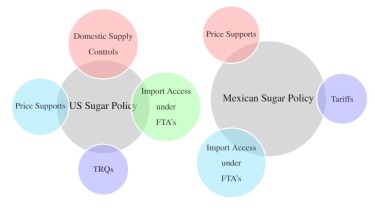 Due to NAFTA integration in 2008, U.S. sugar imports from Mexico increased moderately from 2008-2012, with substantial increases in imports from 2012 onwards. This was primarily due to the rise in cultivated acres and a good crop year in Mexico, which led to increased competition between the U.S. and Mexican sugar industries (Zahniser et al., 2016). Subsequently, the American Sugar Coalition and its members filed anti-dumping (AD) and countervailing (CV) duties to the U.S. Department of Commerce and the U.S. International Trade Commission (USITC) about the negative effects of increased Mexican sugar imports to the United States (see Zahniser et al., 2016, for a comprehensive review of domestic sugar policies in both the United States and Mexico). Figure 1 illustrates U.S. domestic sugar policy, which consists of supply controls, price supports, tariff rate quotas (TRQs), and import access under free trade agreements, while Mexican sugar policy consists of price supports, tariffs, and import access under free trade agreements (Zahniser et al., 2016). For example, the United States imposes an in-quota tariff of 0.625 cents per pound on sugar imports and over-quota tariffs of 15.36 cents per pound on raw sugar imports and 16.21 cents per pound on refined sugar imports, while Mexico imposes an import tariff of 16 cents per pound on sugar (for more details, refer to Zahniser et al., 2016).

Table 1. A Timeline of Sweetener-Related Events/Disputes between the
United States and Mexico 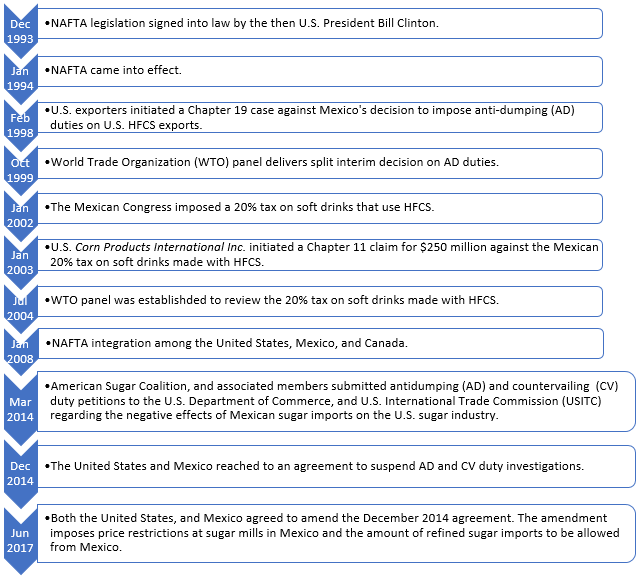 Since NAFTA’s inception, there have been widespread sweetener-related disputes between the United States and Mexico. Table 1 shows a timeline of major events and disputes related to sweeteners between the two countries (Hufbauer and Schott, 2005; Zahniser et al., 2016). In the timeline, two terms (Chapters 11 and 19) need clarification. In NAFTA, Chapter 11 provides investors with guidelines for a dispute settlement mechanism among NAFTA countries. Chapter 19 contains a mechanism for resolving trade disputes, including anti-dumping (AD) and countervailing (CV) duties between any two NAFTA countries (Hufbauer and Schott, 2005).

Raw Sugar vs. Refined Sugar Imports into the United States 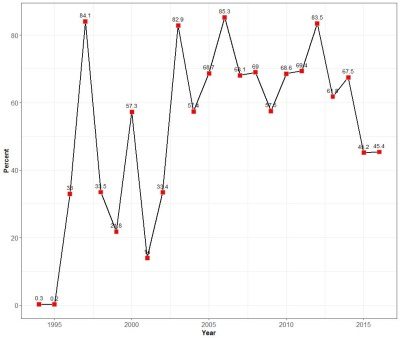 Source: Authors’ calculations based on data collected from
the USDA-Foreign Agricultural Service (U.S. Department of
Agriculture, 2017a).

U.S. refined sugar imports from Mexico are currently about 53% (U.S. Department of Commerce, 2017). Although the issue seems to have been resolved in a recent trade agreement on June 6, 2017, this agreement could be temporary. In renegotiation, the issue of raw versus refined sugar imports could be re-examined, depending on other sweetener trade concessions that might take place between the United States and Mexico.

On July 17, 2017, the USTR office released a document laying out the U.S. objectives for the NAFTA renegotiation. One of the main objectives is reducing the trade deficit with other NAFTA countries (U.S. Trade Representative, 2017). However, it is unclear whether the reference to reducing trade deficit is in terms of overall trade or trade in a particular commodity between the countries.

Source: Authors’ calculations based on data collected
from the USDA-Foreign Agricultural Service (U.S.
Department of Agriculture, 2017a).

The United States could possibly try to (re)negotiate to reduce the sweetener trade deficit with Mexico. There are several ways this could be accomplished. A country’s trade deficit may be reduced through several different policy instruments, including import controls, exchange rate devaluation, price restrictions, and policies that improve the competitiveness of goods. Import controls may include tariffs, quotas, and TRQs. 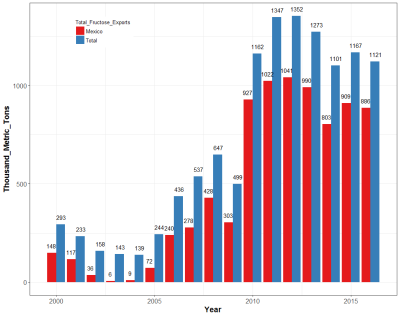 Source: Authors’ computations based on data collected from
the USDA’s Sugar and Sweeteners Yearbook Tables 34a and
34b (U.S. Department of Agriculture, 2017b).

Like the CRA in the United States, the Maize Food and Chemical Derivatives Industry (IDAQUIM)—the industry group that safeguards the interests of HFCS producers in Mexico—indicated that Mexico’s two wet milling plants for HFCS are operating at full capacity (Flores and McLeod, 2017). These two plants are subsidiaries of U.S. firms: 1) Arancia, associated with the U.S. firm Corn Products International, and 2) Almidones Mexicanos, associated with Archer Daniels Midland (ADM) Co. (Hufbauer and Schott, 2005). Currently, the Mexican HFCS industry uses about 2 million tons of yellow corn for annual HFCS production of approximately 520 thousand metric tons (Flores and McLeod, 2017). Like the sugar associations in the United States, the sugar industry in Mexico is very influential. Historically, Mexico’s sugar industry has successfully restricted the use of HFCS in Mexican soft drinks (Buzzanell, 1997).

Mexico is also an important market for U.S. corn. In marketing year 2015/16, 27.9% of total corn exports originating from the United States are exported to Mexico (authors’ calculations based on USDA export data). In the same marketing year, Mexico replaced Japan as the top export destination for U.S. corn. For HFCS production in Mexico, the domestic HFCS industry utilizes about 10–20% of No. 2 yellow corn produced in Mexico through contracts with Mexican farmers (Flores and McLeod, 2017). The remaining 80–90% of yellow corn needed for producing HFCS in Mexico comes from the United States (Flores and McLeod, 2017).

Enforcing trade agreements is one of the key issues that may emerge during the NAFTA renegotiation. In the recent amendment to the suspension agreements, the United States and Mexico agreed to impose penalties on parties violating the trade agreement. For example, if the party from Mexico is found to be in violation of the agreement, the amount of their sugar exports to the United States will be penalized. Depending on the frequency of the violations, sugar exports from Mexico to the United States could be reduced by 50% or more, compared to pre-violation volumes (U.S. Department of Commerce, 2017).

The U.S. and Mexican sweetener industries have long been involved in disputes and have agreed to several side agreements apart from NAFTA. Sugar associations filed antidumping (AD) and countervailing (CV) duty petitions to U.S. institutions in response to an increase in Mexican sugar imports. Later, both the United States and Mexico reached to an agreement to suspend AD and CV duty investigations in order to facilitate new quantity and price restrictions on Mexican sugar imports.

This article highlights key issues that may crop up during the NAFTA renegotiation and the complexities in the North American sweetener market. The key issues include the U.S. sweetener trade balance, price restrictions on Mexican sugar, refined versus raw sugar imports into the United States, total fructose exports and corn exports into Mexico, and enforcing agreements.

Despite the continuous disputes surrounding sweeteners, the U.S. and Mexican sugar industries have one common goal—maintaining high sugar prices and adequate supplies in their respective countries. All strategies related to the sweetener trade between the United States and Mexico are intended to increase the economic rent of one sweetener group at the expense of the other.