The Northern Great Plains (NGP) region has historically been a reliable source of high-quality wheat, with much of the region's grain being exported. A significant amount of demand for these exports originates in Asia, which imported approximately 80% of all Montana wheat and over 50% of exported North Dakota wheat in 2010 (Montana Department of Commerce, 2011; and Vachal and Benson, 2010). Historically, producers sold their grain to local, mostly independently operated grain-handling facilities, which then marketed the grain for rail transport to ports in the Pacific Northwest. Recently, however, technological advances in grain handling and efforts by multinational agribusinesses to link—or vertically integrate—the grain acquisition, handling, transportation, and export processes have prompted changes to the traditional marketing structure.

Although no single catalyst for these changes is identifiable, there are several policy- and market-driven events that may have provided major, albeit unintentional, stimuli to multinational vertical-integration efforts. First, the Renewable Fuel Standards, enacted in the Energy Policy Act of 2005 and expanded by the Energy Independence and Security Act of 2007, have contributed to increased demand and price of corn. Higher corn production incentives and technological advances enabling production in cooler growing regions were likely important factors in shifting farmland away from traditional grain production and into corn. For example, between 2005 and 2007, producers in an NGP county where land re-allocation occurred, on average, planted approximately 136,600 more acres of corn and 30,000 fewer acres of wheat, with other small-grain crops also experiencing planting reductions. Second, global grain markets have experienced significant supply and price uncertainties throughout the 2000s. This volatility stemmed from a combination of production inconsistencies and political barriers to trade. For example, wheat originating in Kazakhstan and the Black Sea region—including grain produced in Ukraine, Russia, and Romania—has had substantial variability in grain quality and been subject to at least seven export bans, temporary quotas, and export tariffs since 2006 (Sharma, 2011).

The volatility in global grain markets and the rising uncertainty in land allocation to wheat production in the NGP may have prompted major Asian importers, such as Japanese and South Korean agribusinesses, to increase their presence in U.S. wheat marketing channels. Specifically, Asian importers rapidly expanded their direct management of grain acquisition, handling, transportation, and export processes, possibly in an effort to reduce the uncertainties associated with obtaining and transferring grain from the United States. Recognizing the underlying reasons for this expansion, how the expanded management efforts are being undertaken, and the short- and possible long-run implications are critical to understanding broad impacts of national ethanol policies and the future of the changing NGP grain marketing landscape.

The entry of multinational operations into the NGP wheat marketing channel and their efforts to vertically integrate have been non-trivially aided by the use of new grain-handling technologies. This is manifest in the acquisition and new construction of high-efficiency, high-volume shuttle-loading facilities during the 2000s. Shuttle-loading grain elevators are designed to quickly load approximately 380,000 bushels of wheat onto dedicated shuttle-unit trains, which are composed of over 100 111-ton covered hopper cars and operated on a fixed, predetermined schedule (Kenkel, Henneberry, and Agustini, 2004). The Burlington Northern Santa Fe (BNSF) Railway Company, which operates over 80% of Class I railroads in Montana and North Dakota (Association of American Railroads, 2010), requires grain-loading facilities to be capable of filling a shuttle train in less than 15 hours. Efficient loading of high-capacity shuttle trains reduces idling time, improves railway use effectiveness, ensures timely delivery to terminal destinations, and reduces railway operators' variable costs. Railway operators pass on these cost savings to shuttle-loading facilities in the form of reduced rail-tariff rates.

In addition to their increasing presence in acquiring, handling, and transporting NGP wheat, several Asian agribusinesses also manage grain-export terminals in the Pacific Northwest. For example, United Grain Corporations, a subsidiary of Mitsui & Co., Ltd., operates an export terminal in Vancouver, Wash., with a 7.28-million-bushel capacity, and EGT, LLC, opened a high-speed, 4.7-million-bushel capacity terminal in Longview, Wash., in July 2012. These facilities extend the vertically integrated management of NGP grain and help increase the ability of multinational agribusinesses to gain market share.

Competition in the NGP Grains Markets

Entry of multinational agribusinesses and their increasing market-share control could result in non-trivial changes to the NGP grain marketing structure. The expected and observed short- and medium-run outcomes include greater competition among grain merchants and higher prices received by farmers. That is, entry of new grain elevators into areas with existing facilities will raise local grain-delivery competition and increase merchants' willingness to pay higher prices for wheat. The higher demands are likely exacerbated by the larger elevators because they require larger quantities of grain to ensure that they can fully load shuttle trains. Moreover, multinational merchants can partially pass on shipping-rate discounts and other cost savings related to vertical integration to farmers in the form of higher prices, allowing these agribusinesses to penetrate a relatively saturated market more effectively and build market share. 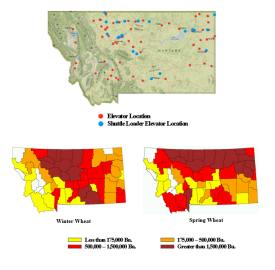 The long-run implications are less evident and may largely depend on the degree of oligopsony power—the acquisition of goods by a few buying firms from many sellers—that may arise from changes in grain acquisition structures. Lower shipping rates, more efficient grain-handling technology, a vertically integrated operation structure, and greater demand for wheat can crowd out existing smaller, less efficient grain-handling facilities. The result is market-power consolidation among the fewer remaining facilities. Table 1 provides suggestive evidence that the NGP is already experiencing market concentration of shuttle-loading facilities among a relatively small number of multinational proprietors.

One implication of an increasingly concentrated grain-elevator industry is changes in grain merchants' pricing strategies. For example, grain merchants may offer wheat farmers prices that are below those that would be observed in a more competitive market and may be slow or unresponsive in adjusting prices upward when fundamental market conditions change—effects of shifting market power that have been shown to occur in numerous other agricultural markets (Just and Chern, 1980; Schroeter, 1988; and Chen and Lent, 1992). A second implication could be spatial grain consolidation, as fewer delivery options are made available to producers. Many farmers would travel longer distances to deliver their wheat, potentially lowering their farm-gate receipts—the net price received by a producer after subtracting all transaction costs associated with marketing the grain—and contributing to negative externalities of worsening road qualities and increased maintenance costs paid by taxpayers.

The magnitude and relevance of these impacts is dependent on the degree of market concentration among grain-handling firms. If long-run market concentration is minimal or if smaller NGP grain-handling facilities are willing and able to assimilate their operation strategies to a changing marketing structure, the potential effects described above may be substantially dampened. For example, entry of shuttle-loading facilities into Midwest corn production regions led numerous smaller elevators to become providers of alternative delivery and storage locations during harvest periods. These facilities now serve farmers who are willing to accept a discounted price in exchange for avoiding the higher transportation and transaction costs associated with longer haul and wait times at often oversupplied shuttle loaders. As supplies decrease throughout the marketing year, the smaller facilities market the stored corn to shuttle loaders.

As NGP producers respond to localized, rapid increases in the competition for grain acquisition and regional changes in the allocation of land away from wheat production, there has been a growing demand for suitable cropland, especially because substantial short-run wheat yield increases are unlikely. While farmland availability for wheat production was already scarce, U.S. ethanol policies may have contributed to additional pressures by increasing incentives to convert more land to grow corn. Figure 2 shows changes in NGP cropland use between 2005 and 2012, indicating that after the introduction of the first Renewable Fuel Standards, traditional wheat production regions such as southern Minnesota, North Dakota, and southeastern Montana experienced substantial reductions in spring and winter wheat planting and contemporaneous increases in acres planted to corn. 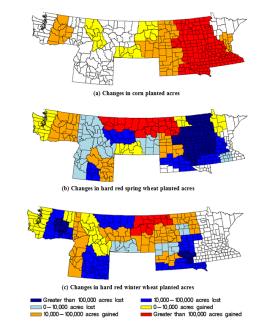 Changes in Planted Acres of Corn, Hard
Red Spring Wheat, and Hard Red Winter
Wheat by Agricultural District in 2005-2012
Indicate a Substitution of Land Away From
Wheat and into Corn Production

A substantial stock of NGP cropland has been in the Conservation Reserve Program (CRP), a voluntary U.S. Department of Agriculture program that allows landowners to idle marginal or environmentally sensitive cropland  in exchange for an agreed upon rental payment. In 2011, over 5.5 million acres in Montana and North Dakota were enrolled in CRP, representing nearly 18% of total CRP acres in the United States (USDA, Farm Service Agency, 2012). However, the entry of shuttle-loading facilities, which have increased competition for wheat, and the conversion of some land into corn production have reduced producers' incentives to maintain farmland in the CRP. In 1998, the average difference between per acre CRP and cash rental rates in Montana and North Dakota was over $15.00; in 2011, that difference was below $2.00.

Figure 3 suggests evidence of important changes in CRP enrollment. Between 2006 and 2011, the majority of acres exiting the CRP occurred in counties that ranked highest in winter and spring wheat production and where most shuttle-loading facilities are located. Figure 3 also shows that CRP land eligible to exit the program between 2012 and 2018 is also in the most productive counties. If land traditionally used for wheat production continues to be reallocated to other crops and if competition for NGP grains persists, the continued transfer of CRP land into crop production may remain a common practice to meet existing and future land demands. Consequently, this can further impact conservation efforts.

Nearly all wheat produced in the NGP is exported. Historically, grain moved west from western production areas and east from eastern locations, with eastern Montana serving as a geographic boundary for the direction of these movements. For example, while over 90% of Montana wheat was shipped west in 2010, only approximately 25% of North Dakota wheat moved to Pacific Northwest export terminals, with the majority of the remaining stocks shipped eastward (Montana Department of Commerce, 2011; and Vachal and Benson, 2010). The entry of Asian multinational grain merchants could lead to structural shifts in these traditional grain movement patterns. 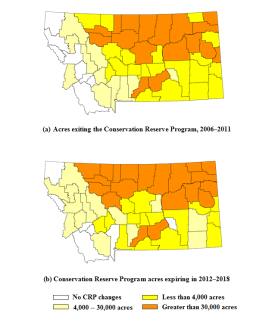 As shown in Figure 1 and Table 1, multinational agribusinesses have established shuttle-loading facilities throughout eastern Montana, many of which began operation in the late 2000s. In 2012, Mitsui & Co., Ltd., began constructing an $18 million shuttle-loading facility in southwest North Dakota; this facility is expected to transport approximately 10 million bushels of wheat to western export terminals. If multinational agribusinesses continue to introduce large-scale, efficient grain-handling facilities in eastern NGP regions, then increased quantities of historically eastbound wheat could begin to flow west. The possible implications include changes in basis and cash price behaviors because local markets are more likely to respond to conditions in the Pacific Northwest rather than follow grain demands in the Midwest.

Growing global wheat supply uncertainties and unintended impacts of U.S. domestic policies may have contributed to Asian multinational agribusinesses’ increased interests in securing long-run access to reliable sources of high-quality U.S. wheat. These interests have been manifest in their increased efforts to vertically integrate wheat procurement, handling, transportation, and exports, largely by constructing and acquiring efficient, high-capacity shuttle-loading facilities. Long-run implications of these changes could include the exit or change in the role and function of less efficient, smaller elevators and subsequent increases in market-power concentration by a few multinational agribusinesses. Significant economic ramifications to NGP grain producers, traditional wheat marketing structures, and land conservation efforts could follow. Furthermore, price impacts could spill over to other U.S. wheat markets because NGP production constitutes a large share of overall U.S. grain output.

Anton Bekkerman (anton.bekkerman@montana.edu) is an Assistant Professor of Economics in the Department of Agricultural Economics and Economics at Montana State University - Bozeman.