The Twin-Transfer Squeeze on Rural Households and Governments in Virginia

Federal, state and local government budgets are being strained during recovery from the deep recession of 2008-9. Revenues to governments fell dramatically as a result of employment losses and the collapse of the real estate market. Concurrently, automatic stabilizers combined with expansionary federal fiscal policy and increased outlays contributed to a deepening federal budget deficit. State and local governments generally must balance their budgets, but many benefited from the American Recovery and Reinvestment Act of 2009 and its now-disappeared stimulus funding. Federal debt and solutions to it will place fiscal stress on all levels of government. Federal transfers of funds to state and local governments are already falling and many states are increasing local government responsibilities for program spending. Stress will also result from cuts in public transfer programs to households as the federal government struggles to reduce its debt burden.

The “twin transfer” threat—concurrent cutbacks in transfers to households and to local governments—has particularly strong implications for rural communities. These communities are highly dependent on transfers of public funds and this dependence has grown over time. A confluence of long-term trends has created a perfect fiscal storm and rural localities are finding themselves at its center. Demographic changes such as aging and outmigration of younger workers leave remaining rural households more dependent on transfers. In general, and particularly in the Southeastern United States, rural economies have gradually diversified out of agriculture and manufacturing, and steep cutbacks in manufacturing and construction employment during the recession created a jump in rural unemployment rates that will likely take a number of years to reduce. Rural communities are vulnerable to cuts in funding for social services, education, and infrastructure at the same time that local demands for these services are growing. Rural households are vulnerable to potential declines in transfer payments and, as a result, find themselves less able to pay for locally provided services.

Rural government dependence on fund transfers has grown while ability to raise revenues locally has been circumscribed by many factors. Many rural localities have remained dependent on the real property tax as their primary source of revenue. Declining property values, limited ability to increase tax rates, and few alternatives to the property tax constrain fiscal options in poor rural localities. 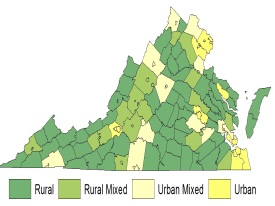 The degree of vulnerability to the twin transfer threat varies and is clearly associated with degree of “rurality”. For example, a report to the Virginia Rural Center Virginia Rural Center (2010) shows high dependency among households in the most rural counties on funding transfers from the federal government. This study also shows that rural local governments receive significant funding from higher levels of government. For example, Virginia state aid for K-12 education is most important in the most rural counties where local revenue-generating capacity is low.

This article uses readily available data to create a profile of Virginia households' and localities' dependency on outside sources of funding. We analyze how the profile of vulnerability varies by geography, and evaluate plausible scenarios related to cutbacks in transfer programs. We use Virginia as an example because it is representative of many states facing the twin transfer problem. Typical of many states, Virginia must balance its budget annually and its local governments are highly dependent on two sources of revenue: transfers from higher levels of government and the property tax. Also typical of most states, its rural population has been aging rapidly and making rural households increasingly dependent on transfers.

Table 1
Indicators of Vulnerability to Declines in Transfers to Virginia Households by Location, 2009.

Few studies have examined community vulnerability to revenue declines. Many studies using economics have examined household or individual vulnerability to adverse outcomes such as income loss or unemployment (Alwang, Siegel and Jorgensen, 2001). Community vulnerability has been discussed in the context of exposure to natural disasters (Atkins, Mazzi and Ramlogan, 1998; Guillaumont, 2007), but some studies have also examined community-level vulnerability to economic stress (Ayadi, Rostoin and Montiguad, 2006; Alasia, et al.  2008). This literature shows that some communities are more vulnerable than others and that funding cuts could cause major stress in more rural areas.

Ultimately, a community’s vulnerability is determined by (i) the size and frequency of shocks—particularly in this case negative fiscal shocks—it faces (ii) its exposure to shocks; (iii) its ability to manage shocks; and (iv) the ultimate impact of the shock on outcomes (Alwang, Siegel and Jorgensen, 2001). Vulnerability is more complex than variability. While exposure to adverse conditions can cause variability in incomes, employment and other economic variables (Siegel, Alwang and Johnson, 1995), vulnerability refers to some probability that variability will increase undesirable outcomes such as poverty (Alwang , Siegel and Jorgensen, 2001). At the community level, vulnerability might be associated with an unacceptable increase in poverty, decline in incomes, or inability to pay for basic services.

Which Areas of Virginia Are Most Vulnerable?

Virginia is a diverse state, ranging from urbanized and sprawling suburban counties to rural counties with low population densities and few economic alternatives. The Virginia Rural Center (2010) identifies four types of counties: urban, mixed urban, mixed rural and purely rural (Figure 1). Sources of transfers into these counties include direct government transfers to households and inter-governmental transfers to localities. Information on transfers to households is available from the Bureau of Economic Analysis (BEA 2012) and inter-governmental transfers can be found at Virginia’s Commission on Local Government (2012). The fractions of household income and local government revenues coming from transfers reflect the degree of vulnerability to cutbacks from each funding source.

Households in rural Virginia have far lower levels of income compared to urban and suburban households, and, as a result, poverty rates are higher in more rural areas (Table 1). The percentage of household income in rural areas coming from transfers, including health, social and retirement sources (25.5%) is more than double the rate in urban areas (12.2%). The biggest sources of transfers to rural households are related to the growing proportion of elderly people. This aging of rural households increases dependence on health—mainly Medicare—and retirement—Social Security—transfers. Table 1 shows two scenarios related to moderate and extreme declines in transfer payments. Moderate shock is defined as the decline in income from a 50% reduction in Medicaid, Social and Unemployment transfers. Extreme shock adds retirement and Medicare to this list. These scenarios illustrate likely responses by the federal government to calls for greater austerity. 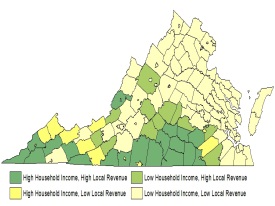 Due to their high dependence on transfer payments, incomes to rural households will fall dramatically from their already low levels—an extreme shock scenario is associated with a more than 23% decline in household incomes in the most rural areas. Rural localities in Virginia are also more dependent on transfers from the state and federal government to support local government operations (Table 2). The dollar amount of transfers rural localities receive per person is slightly higher than their urban and mixed rural counterparts, but, because the ability to raise revenues locally is constrained by economic factors, rural counties receive far higher proportions of revenues through transfers from higher levels of government.

Twin-transfer vulnerability is highest in the most rural areas of Virginia. Highly vulnerable counties are located in rural areas of Southside Virginia and in Southwestern Virginia (Figure 2). The correspondence between high percentages of household income from transfers, high percentages of local government revenues from transfers, and degree of rurality indicates that many rural counties in Virginia will face difficulties in adjusting to the new fiscal realities. Many of these same counties have faced economic hardship due to loss of manufacturing jobs and outmigration of youth; finding alternative revenue sources to compensate for state and federal cutbacks will be difficult.

To get a richer sense of the impact of twin transfers, Figure 3 presents alternative county poverty rates likely to result from a moderate reduction in transfers to households. This figure shows the correspondence between vulnerability to poverty and local dependence on revenue transfers. Many of the poorest counties are also highly dependent on inter-governmental transfers. These counties will experience declining household incomes as federal transfers are reduced as a result of belt-tightening. These reduced incomes will lead to higher poverty rates. Both these factors will limit the ability to raise revenues locally, and declining transfers from higher government will create increased hardship.

Conclusions: Challenges Ahead for Rural Areas 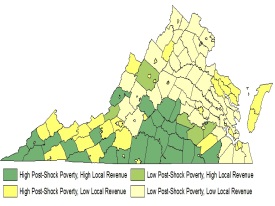 As federal and state governments reduce expenditures to manage their budget deficits or balance their budgets, households and local governments will be caught in a twin-transfer squeeze. Rural areas are most challenged by this squeeze as these localities are poorest and most dependent on external transfers. Part of this vulnerability is due to policy—during the 1990s many rural areas throughout the United States sought to attract retirees in response to dwindling economic development alternatives. Many delayed seeking alternative sources of local revenues, and now increasingly rely on transfers from the state and federal governments. In most states, the real property tax represents over 40% of locally generated revenue and local governments find themselves scrambling for alternatives in one of the most fiscally constrained environments in America’s history.

Local governments face a limited menu of solutions to the twin-transfer problem. Absent political changes to limit reductions in transfer payments, local governments must seek internal solutions. Options include diversifying the tax base away from real property taxes, reducing capital investments, cutting nonessential services, and, possibly, seeking efficiency gains through privatization or other measures. While not all states face identical pressures as Virginia, twin-transfer challenges are widespread throughout the United States. All levels of government should assist in finding solutions since interactions across levels mean that fortunes are intertwined.

Atkins, J., Mazzi, S., and Ramlogan, C. (1998). A study on the vulnerability of developing and island states: A composite index. London: Final Report Prepared for the Commonwealth Secretariat.