U.S. Agricultural Exports to Cuba: Composition, Trends, and Prospects for the Future

The approval of the Trade Sanction Reform and Export Enhancement Act (TSRA) in October 2000 marked the beginning of a new era of U.S. —Cuba relations. Prior to the approval of TSRA, the United States barely figured as one of Cuba’s trading partners; since then, despite existing Cold War tensions between the two countries, U.S. agricultural and food exports has turned the “Colossus of the North” into one of Cuba’s principal trading partners.

Before the 1959 revolution, Cuba and the United States enjoyed strong economic ties. Approximately 67% of Cuba’s exports were destined for the U.S. market, and U.S products accounted for 70% of the island’s imports in 1958 (Ross, 2004). Geographical proximity, close cultural and political ties, U.S. investment in strategic sectors of the Cuban economy, the structural characteristics of both countries’ economies, and reduced transportation costs were among the principal reasons for close economic ties between Cuba and the United States in the 1950s.

The intensification of U.S economic sanctions, combined with the disintegration of the Socialist Camp (1989), and the disappearance of the Soviet Union (1991) dealt a severe blow to the Cuban economy, particularly the agricultural sector. As an agricultural producer, and despite incurring notable merchandise trade deficits, Cuba maintained positive agricultural trade balances during the 1990s. At the onset of the “Special Period” in 1990, Cuban agricultural exports, which consisted of food, live animals, beverages, tobacco, vegetable oil, and animal fat, totaled $4.8 billion (USD). However, the total value of agricultural exports, as well as total merchandise exports, declined significantly during this period (Table 1). This was mostly the result of the loss of its traditional “Socialist Bloc” export markets, and the severe economic crisis resulting from the collapse of the Socialist Camp (Nova González, 2006; Ritter, 1994; and Mesa-Lago, 1993). In 1990, agricultural exports accounted for 87.5% of total merchandise exports; by 2002, this figure had fallen to 53.2%. 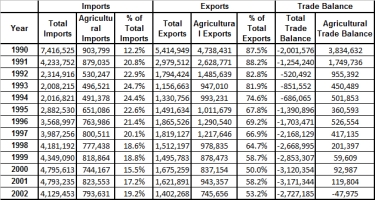 The economic crisis of the 1990s also affected Cuba’s capacity to import food and agricultural products. The value of agricultural imports declined quite notably during the most difficult years of the Special Period (1990-1993), and never recovered to 1990 levels. Paradoxically, as a share of total merchandise imports, agricultural imports increased significantly during this period. Cuba’s agricultural production and trade were also impacted by natural disasters, particularly Hurricane Michelle in 2001, declining levels of investment, lower total factor productivity, insufficient inputs such as fertilizer and pesticides, and existing regulatory constraints and prohibitions (Comisión Económica Para América Latina y el Caribe, 2000).

Relaxing the Embargo through Agricultural Trade

Within this context, and in an effort to improve relations with Cuba, President Clinton signed into law TSRA in October 2000. This law lifted the existing restrictions on U.S. food and agricultural exports to Cuba, which were in place since the 1962 U.S. embargo was instituted. The TSRA terminated any existing unilateral U.S. sanctions with respect to food, agricultural products, and medicine, and prohibited the U.S. President from imposing any new sanctions unless he or she informs Congress 60 days in advance of doing so, and Congress enacted a joint resolution stating its approval (American Society of International Law, 2001). According to the TSRA, exports of food, agricultural products, and medicines to states considered supporters of terrorism are to be controlled through one-year licenses issued by the U.S government and exporters will not receive direct U.S. government assistance (American Society of International Law, 2001).

In the case of Cuba, no U.S. person or citizen may provide payment or financing for exports of food, agricultural products, and medicines from the United States; sales of these products may only take place through advanced cash payments or through financing provided by third-country intermediaries (American Society of International Law, 2001). Under the TSRA, the Secretary of the U.S. Treasury can approve travel to Cuba for sales of authorized agricultural products, food, and medicines, and other related purposes (American Society of International Law, 2001).

The value of U.S. agricultural and food exports to Cuba has shown notable fluctuations since 2001. Grains and feeds represent the largest category, in terms of value, followed by poultry, oilseeds, livestock and meats, dairy products, horticultural products, sugar, tropical products, and seeds. Corn, wheat, and rice account for the bulk of U.S. grains and feeds exports to Cuba. While corn exports have increased substantially since 2001, wheat and rice exports have declined since 2008. U.S. rice exports to Cuba have basically disappeared since 2008 due to increased competition from Vietnam, which has replaced the United States as Cuba’s principal rice supplier. Increased wheat imports from Canada and the EU have displaced U.S. exports since 2010.

In the poultry category, broiler meat and turkey exports to Cuba have grown significantly since 2001. U.S. exports represent an estimated 80% of total Cuban poultry imports. This remarkable growth can be attributed to three principal factors: (1) increases in the demand for poultry as a principal source of protein, (2) the competitive advantage enjoyed by U.S. producers, and (3) the inability of domestic producers to satisfy national demand. In more recent years, increases in household incomes associated with the expansion of self-employment in the non-state (government) sector has also contributed to higher demand for agricultural and food imports.

U.S. exports of oilseeds, particularly soybean, have also increased notably since 2001. Soybean patties, picadillo de soya, have emerged as one of the principal sources of protein distributed to the Cuban population (at subsidized prices) through a rationing system. In 2002, soybean exports to Cuba were valued at $20.9 million, accounting for 15% of the total. In 2012, soybean exports reached $62.3 million, accounting for 12.7% of total U.S. agricultural and food exports to Cuba, and representing an increase of 198% during the 2002-2012 period.

Exports of livestock and meats, excluding poultry, to Cuba have also increased significantly since 2001, particularly after 2004. Even though they only accounted for 2% of the total value of U.S. agricultural and food exports to Cuba in 2012, the value of exports in this category increased by 375%—from $1.9 million in 2002 to $9.5 million in 2012. Historically, pork has dominated this category. In 2002, pork exports to Cuba represented 73.7% of total livestock and meats exports; this figure increased to 82% in 2012 primarily due to pent-up demand and insufficient domestic production. 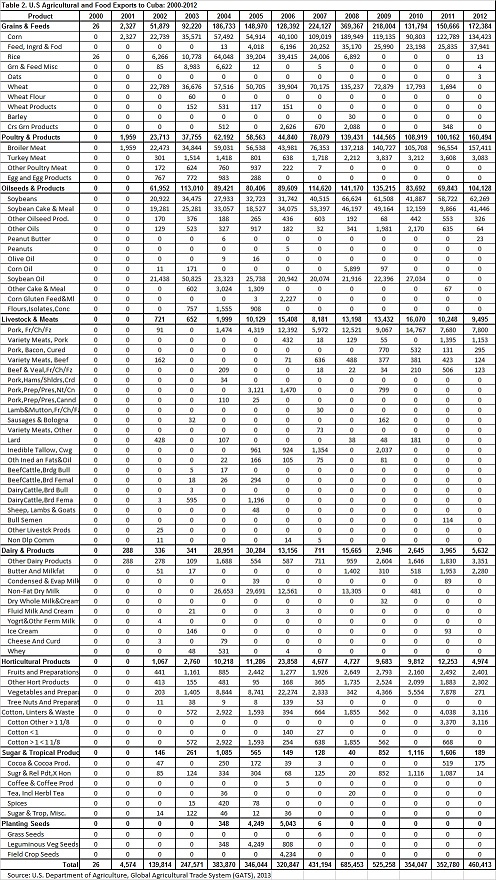 The increases in the value of U.S agricultural and food exports to Cuba shown in Table 2 can be attributed to several factors. One obvious factor was the approval of the TSRA in 2000, which permitted, for the first time in almost four decades, direct sales of U.S. agricultural and food products to Cuba. Another major factor has been the notable increases in global agricultural commodity prices, particularly in 2007 and 2008, driven by population and income growth in emerging markets, higher energy prices, subsidized bio-fuel production, greater demand for agricultural products, and the global financial crisis (von Braun, 2008). More importantly, Cuba’s demand for U.S. agricultural and food products has been driven by the insufficient performance of its own non-sugar agricultural sector, which has been affected by declining output levels, falling agricultural yields, decreases in productivity, lower levels of investment, insufficient access to inputs, bureaucratic constraints, natural disasters, and a growing dependency on food imports (González-Corzo, 2011).

To confront these challenges, and to stimulate domestic production and reduce imports, Cuba has implemented a series of agricultural reforms since 2007. The most notable include: increasing the prices paid by the state to agricultural producers, transfers of idle state-owned lands to cooperatives and private farmers, decentralization of ministries and government agencies engaged in agricultural policy and management, the authorization of direct sales of selected agricultural products to the tourism sector and to the population, and the expansion of agricultural microloans (González-Corzo, 2011).

Despite these measures, Cuba’s agricultural sector has not produced the expected results (Nova González, 2012). Figures 1, 2, and 3 show physical output levels for selected crops in Cuba between 2001 and 2011. 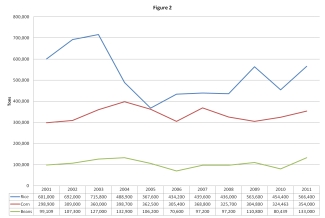 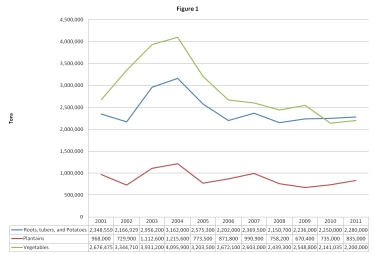 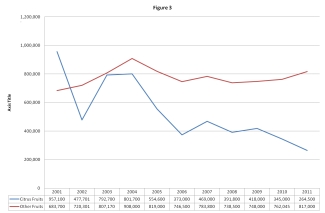 Output levels and yields in many crop categories have continued to decline even after the introduction of agricultural reforms, forcing Cuba to rely on imported food primarily from the United States. This situation, in turn, has contributed to higher prices for agricultural products, which have adversely impacted the purchasing power (and consumption levels) of the Cuban population (Nova González, 2012).

Even though recent declines in Cuba’s non-sugar agricultural production can be partially attributed to natural disasters such as hurricanes and droughts, Nova González (2012) identified several structural and organizational factors that have also contributed to this situation. These include delays in the transfer of idle, state-owned lands to non-state agricultural producers, insufficient inputs (for example: fertilizer, pesticides, machinery, equipment and fuel), excessive centralization, regulatory constraints, price rigidity, and limited financial and technological assistance for agricultural producers.

Existing material, regulatory, and financial constraints, combined with the other factors already mentioned, have limited the effectiveness of Cuba’s recent agricultural reforms and its efforts to achieve agricultural and food self-sufficiency. This represents an opportunity for expanded U.S. agricultural and food exports to Cuba. Ironically, this opportunity is hindered by existing U.S. economic sanctions with respect to Cuba. U.S. restrictions such as prohibitions against granting credit to Cuba for purchases of U.S. agricultural and food products— “cash in advance” payment terms—require Cuba to obtain third-country letters of credit to finance such purchases, regulations with respect to business travel to Cuba by U.S. citizens, and other provisions of the Torricelli and Helms-Burton acts weaken the competitive position of the United States and increase the total cost of doing business with Cuba. U.S economic sanctions also impose significant costs and inefficiencies on the Cuban economy by forcing it to obtain imports from distant countries, and to accumulate excess inventories in order to ensure the availability of domestic supplies.

Permitting full bilateral trade by eliminating U.S. economic sanctions with respect to Cuba would improve the attractiveness of U.S. agricultural and food products for the Cuban economy, and would allow Cuba to earn hard currency by exporting goods and services to the United States simultaneously benefiting producers and consumers on both sides of the Florida Straits.

Under a scenario of normalized relations, U.S. agricultural and food exports to Cuba would be driven by several key supply and demand factors. On the supply side, U.S. producers enjoy a competitive advantage derived from high quality products, lower production costs, and competitive pricing (Coleman, 2009). U.S. exports benefit from geographical closeness to Cuba (Coleman, 2009). Unlike competitors, U.S. exporters can offer smaller, customized, shipments on a “just-in-time” basis (Coleman, 2009). The elimination of the U.S. trade embargo would improve the competitive advantage of U.S. agricultural and food exports to Cuba, contributing to substantial increases in value and volume over time.

On the demand side, barring any drastic policy reversals and any major economic crisis, U.S. agricultural and food exports to Cuba are poised to continue to increase. As Cuba continues to “update” its economic model, the non-state sector’s share of the economy is bound to increase. More activity in the non-state sector is expected to result in higher household income (at least for some sectors of the Cuban economy) (Kornai, 2008). This will increase the country’s demand for imported food and agricultural products. The expansion of international tourism, including American visitors in the not too distant future, will also contribute to increases in Cuba’s demand for food and agricultural imports.

Until Cuba is able to successfully address the challenges confronting its agricultural sector, and for the foreseeable future, the United States is likely to remain among its principal suppliers of imported food and agricultural products.

Mesa Lago, C. (1993). The economic effects on Cuba of the downfall of socialism in the USSR and Eastern Europe. In C. Mesa-Lago (Ed.), Cuba After the Cold War (pp. 133-196). Pittsburgh: University of Pittsburgh Press.

Mario A. Gonzalez-Corzo (mario.gonzalez-corzo@lehman.cuny.edu) is Associate Professor in the Department of Economics and Business at Lehman College of The City University of New York (CUNY), New York City.

Armando Nova Gonzalez (armando@ceec.uh.cu) is Professor at the Center for the Study of the Cuban Economy (CEEC) at the University of Havana, Cuba.