There was a time when the concept of micro-lending was only synonymous with developing economies and their poor borrowing households. Initially conceived in South Asia several decades ago, micro-lending or microfinance was designed to provide financial assistance to poor households. These clients were written off by regular lending channels as non-bankable clients with very high credit risks and very small loan requests (Brau and Woller, 2004). This movement eventually disproved several lending myths to which regular lenders subscribed. For instance, the majority of the microfinance institutions (MFIs) operating worldwide reported successful operations punctuated by, among others, loan repayment rates of over 90% and poverty alleviation(Murdoch, 2000).

Microfinance has been employed in the United States since the 1980s (Kiviat, 2009), but no similar financing scheme has been formally introduced in the farm sector until the establishment of the U.S. Department of Agriculture’s (USDA) microloan program earlier this year (USDA-FSA, 2013). This new USDA microloan program can certainly bring financial resources to small farms in the country. Envisioned to help small and beginning farm operations, the new microloan program provides opportunities for loan requests of up to $35,000 at reasonable loan terms. Loan proceeds may be used to pay for initial business start-up costs and operating expenses. The benefits of such seed money in jumpstarting a business venture or sustaining an existing operation cannot be overstated now that such a funding opportunity is available to small and beginning farms.

Among the intended beneficiaries of this program, the organic farm sector could potentially benefit immensely from microloans. This contention can be attributed to at least three factors: industry start-up and expansion opportunities, slower business size growth trends, and farm operators’ business principles or attitudes.

The organic farming sector has registered remarkable growth in the past two decades as organic food and beverage sales grew from $1 billion in 1990 to $26.7 billion in 2010, with annual average growth rates between 12% and 21% (OTA, 2011). For the first time in 2005, all 50 states officially registered the existence of certified organic farm operations covering a total of over 4 million acres (USDA-ERS, 2008). In recent years, however, when almost 70% of U.S. consumers now purchase organic products (Hartman Group, 2008), organic farmers have been overwhelmed by such rapid growth in their markets and were unable to match the pace of expansion with increases in their farm production (Dimitri and Oberholtzer, 2009). Most organic producers now complain of difficulties in sourcing reliable organic raw material inputs, which to them has become a major impediment to business growth (Oliver, 2006; Wilcox, 2007). Given this backdrop, the organic farm sector then presents a number of business opportunities that include backward integration (organic input supply businesses), business start-ups, or expansion of existing farm operations.

In spite of the significant growth pressure, the majority of organic farms still remain small, especially relative to their conventional farming counterparts. For the 2008 growing season, the average size of organic farms was 285 acres(USDA-ERS, 2010) while the average size for all farms was 418 acres (U.S. Census Bureau, 2012).Survey data also showed the prevalence of family-based organic operations—83% to 87% of organic farms are listed as either sole proprietorships or family partnerships (OFRF, 2003).

Figure 1 shows the growth trends in the number of organic farms and their business sizes. As the plots indicate, the number of organic farms grew at an average rate of 9% from 2000-2008, with the 2008 figure representing a 96% increase over the 2000 level. In terms of farm size, organic farm size has grown at a lower average rate (vis-à-vis farm number growth) of 7% over the same period, and the 2008 average size is only 38% larger than the 2000 level. These comparative growth rates indicate that the organic farm industry’s overall growth tends to be more accounted for by business start-ups rather than the expansion of existing businesses. This tendency can be attributed to some organic farmers’ management styles, philosophy, or attitudes that differentiate them from operators of small, conventional farms. 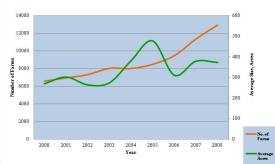 Figure 2 confirms a skewed size distribution of organic farms where the majority of the farms generate less than $25,000 in sales, but a large proportion of organic farm revenues ($1.593 billion of the total $1.709 billion) is accounted for by those with $25,000 or more in sales.

An ongoing project funded by the Southern Sustainable Agriculture Research and Education (SARE) program investigates farm credit access and risk measurement issues experienced by organic farmers. In two focus group discussions with operators of small organic farms held in early 2012, a recurring theme was the participants’ reluctance to consider regular lending channels as funding sources for their business financing requirements. Most, if not all, of the participating farms have self-financed their operations. Other than self-financing, a study conducted by the C.S. Mott Group for Sustainable Food Systems at Michigan State University found that the majority of organic farms, especially those in the start-up phase, have maximized their credit card debt to finance their business operating needs (Cocciarelli, Suput, and Boshara, 2010). 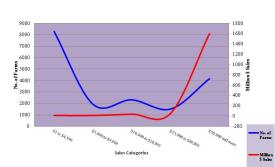 There are several factors that can explain such organic farms’ financing preferences. A 2004 survey conducted by the nonprofit Center for Community Self-Help revealed that 56% of organic farmer respondents considered debt as not compatible with their sustainability principle while 45% suspected that lenders do not really understand their farms (Curtis, 2004).

Several studies confirm that some organic farmers would be willing to sacrifice profits in exchange for social and environmental goals (Chouinard et al., 2008; Hayes and Lynne, 2004; Mayberry, Crase, and Gullifer, 2005). Sheeder and Lynne (2011) explain that “… the assumption that (profits) play the only role in economic decision (of organic farmers) is highly contentious” (p. 433). As a result, this class of organic farmers does not commonly plan to expand their business. They keep their operations at a manageable size that can be sustained by their personal funding sources and, hence, do not see the need to rely on regular external debts.

On the other hand, organic farms that are more business-oriented could have been motivated by other considerations. The tighter credit conditions and the increased competition among borrowers for bank loans during the recent recessionary times could have pressured them to be prudent in their borrowing decisions. Smaller farm businesses usually have a harder time competing with more established, larger businesses for regular farm credit.

Moreover, in the organic farmers’ focus group discussions held last year, almost all organic farmers agreed that the size of their loan requests has also discouraged them from applying for a loan from a regular farm lender. A farmer explained how her $7,000 working capital loan application was turned down because it was “too small.” As many organic farms operate less than 10 acres (Figure 2), their financing requirements naturally fall significantly below the usual size of loan applications received by regular lenders from their larger business clientele.

To corroborate the organic farmers’ views on organic farms’ credit issues collected from the focus group discussions, a survey was conducted among major farm lenders (commercial banks, farm credit associations, and the Farm Service Agency (FSA)) in several Southeastern states. In terms of general perceptions of organic farm borrowers, the three most popular responses given by lenders were that organic farms had “too small loan requests,” operated by “fussy farmers (who were making) a big deal of trivial stuff,” and had “stagnant operations with very limited expansion plans.” The majority of the lender respondents (84%) also reported no growth in their servicing of organic farming clients during the past two years (Figure 3). Approximately 40% also indicated that their organic farming clients had loan requests of less than $10,000 (Figure 4)—which is, by normal lending standards (outside the microloan program),indeed small and most likely non-optimal when lending transaction costs are factored in. 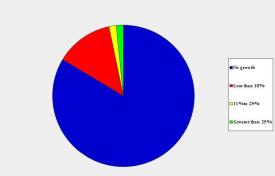 What Lenders Should Know

In order to tap small organic farms as clients under the USDA microloan program, a number of issues need to be reconciled between lenders and their prospective borrowing clients. These issues have become more evident from the results of the 2012 organic farmers focus group discussions and lender survey. For instance, organic farmers are concerned that the highly diversified nature of their production operations is not given due credit by lending officers evaluating their loan applications. As they contend, enterprise diversification has risk mitigation benefits that need to be factored into the lenders’ credit risk assessment models and the loan’s commodity insurance requirements. In the lender survey, however, 48% of the respondents completely disagreed with the risk mitigation argument while 41% indicated that diversification would never affect each loan transaction’s insurance requirement. 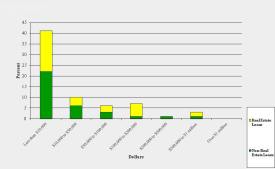 Another point of contention revolves around organic farms’ soil enhancement investments that, according to the farmers, should increase the value of their real estate properties vis-à-vis other comparable farmland properties. Results of the same lender survey indicate that 64% of the respondents assert that organic farms’ soil enhancement investments will never affect farm real estate appraisal results while 73% indicate no adjustments in the calculation of (credit scoring models’) financial ratios involving equity and asset measures.

Overall, organic farmers clamor for the lenders’ proper regard and understanding of their farming operations. The focus group participants are concerned that lenders either make rash generalizations, confusing them with conventional farm clients, or insist on ascribing stereotype labels of “hobby or lifestyle farms” to them.

The new microloan program has tremendous potential in stimulating business activity across the entire farm industry. By encouraging the proliferation of small farm businesses, the farm industry can take advantage of a wide range of business opportunities, including specialized and niche market gaps that only small businesses, like organic farm operations, can fill.

The supply gap in an expanding organic industry creates business start-up opportunities in backward integration (organic input supply businesses) and mainstream organic production as well as opportunities for expansion of existing farm operations. In an industry where business size growth can be slowed by certain operators’ tendencies to self-finance and have multiple objectives beyond profitability, microloans can supply the financing needs of existing farms, especially those that persistently maintain small operations, as well as start-up business ventures entering the industry. The new micro-lending program can bring about valuable macroeconomic benefits from a growing organic sector, if lenders and organic farmers can resolve their differences.

Brau, J.C., and Woller, G.M. (2004). Microfinance: a comprehensive review of the existing literature. Journal of Entrepreneurial Finance and Business Ventures, 9(11), 1-26.

This study was funded by the Southern Sustainable Agriculture Research and Education (SARE) program under Grant No. LS11-240.