Where the Grass is Always Greener: Dairy Farmer Location Preferences

Dairy farms are particularly attractive as economic development drivers because they have a significant economic impact (Cryan, 2004; and Cabrera et al., 2008). The number and diversity of input suppliers (for example, feed, veterinarian, machinery, milking facilities, equipment, and supplies) and output activities (for example, hauling, processing, and marketing) related to dairy farming create jobs and encourage economic activity. For these reasons, many states have active programs to attract dairy producers from other areas and to stimulate milk production growth (Archwamety, 2006; Dairy Herd Management, 2013; and Holsteinworld, 2014).

Location and expansion decisions for dairy farmers are of critical importance as the investment in facilities is both large and essentially sunk with little salvage value. Recent events that have played major influences on the U.S. dairy sector include volatility in feed costs and strong growth of dairy exports. Feed costs have increased in both levels and volatility since 2007 due to export demand and federal biofuel policies (Wright, 2014). Drought has also affected the cost and availability of forages at dairy farms that grow a higher percentage of their feed requirements. The same period witnessed significant growth in U.S. dairy product exports, particularly to Asia. In 2013, over 15% of U.S. milk production was exported and high margins encouraged expanded milk production (U.S. Dairy Export Council, 2014). These factors likely affected farm location and expansion decisions. This paper examines recent trends in the location of milk production and the opinions of large dairy herd operators about location decision factors. 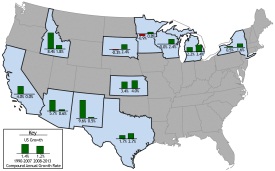 Historically, U.S. milk production has followed population growth to southern and western states with the market share of traditional milk production in northeastern and midwestern states gradually shrinking. Recent decades, however, have witnessed movements to parts of the country that are more sparsely populated and have other weather or geographic characteristics that facilitate milk production (Stephenson, 2013). Advances in milk processing and transportation have enabled moving milk and dairy products over longer distances.

Managers must consider many factors when locating a modern dairy farm. The increasing size of commercial operations and widespread lack of knowledge about agriculture on the part of non-farm neighbors can lead to conflicts. Environmental regulations and the permitting process can be onerous and steer location decisions. Farmers may need to trade off isolation from potential neighbor conflicts with proximity to input and output markets. Abdalla et al., (1995) suggested that agricultural operation location was driven, in part, by environmental regulations and rural population growth. Winkler Stirm and St-Pierre (2003) used a large, national survey of dairy farmers and found that availability of water, availability of land for manure disposal, and milk price received were the most important factors. They concluded that factors related to daily milk production activities were the most important, in general, but patterns differed by region and herd size.

Based on past research and contemporary issues in the dairy industry, we examined 25 location decision factors. It is helpful to think of them in five broad categories: milk marketing, input costs, natural resources, public policies and perceptions, and family factors.

For decades dairy farms have been growing in size and specializing in the dairy herd enterprise. Today, the vast majority of revenue for the typical dairy farm comes from milk. Thus one would hypothesize that milk price received would be a primary consideration when determining where to locate a dairy farm. Federal Milk Marketing Orders (FMMOs) are policies that define minimum prices for farm milk based on end use (for example, beverage, yogurt, cheese, or butter) and pool the revenues to define a minimum blend price for producers marketing milk in that region. FMMOs provide some assurances of pricing mechanisms but also have some constraints and may be viewed as unresponsive to market forces. Thus, the absence of FMMOs might be viewed as an advantage or a disadvantage, depending on the circumstances. Regions without an FMMO where milk production has grown rapidly include Idaho and the inter-mountain region. Related in some respects is the presence and proximity of a large fluid market. In general, and by design in FMMOs, milk consumed in beverage form receives a higher farm price. Farmers also generally pay the hauling costs to the processor or handler, and access and proximity to a processor may keep hauling costs to a manageable level. The final milk marketing decision factor is the number of milk handlers reflecting the number of potential buyers in the area. The merger and acquisition activity that has occurred in dairy processing in recent years has resulted in some regions of the country with what is viewed as a lack of competition or monopsony on the part of milk buyers. Thus one would hypothesize that more buyers would be preferable to dairy farmers.

Input cost location decision factors included: cost of feed, cost of labor, cost of financing, supply of locally grown forages, heifer availability, heifer proximity, and construction costs of a new facilities. Feed is the largest single expense in milk production accounting for 80% of operating costs and more than 50% of total cost of production in 2014 (U.S. Department of Agriculture (USDA) Economic Research Service, 2014). Long-term profitability in the dairy industry is driven by the ability to control costs and, thus, maintain a profit margin. Forage feed costs are a function of local supplies—particularly in times of adverse weather events. Concentrate feed costs are also a function of proximity to major corn-producing states and basis. The increase in feed cost levels and volatility since 2007-08 have focused many dairy farmers on feed cost. Construction costs relate to geography, climate, and production systems.

Public policies and relationships decision factors included: complexity of state and local waste management laws, state and local perception of animal agriculture, local population density, and economic or financial incentives. Environmental rules and regulations related to water and air quality have many implications for modern dairy farm management. This is particularly true for larger herds whose practices are generally scrutinized more. Thus, manure management-related factors might be important considerations in dairy farm location. Some states maintain environmental and site permitting while others have ceded this authority to local governments. Similarly, some states have more water or air quality regulations while others have less. Local population density can capture the potential for neighbor relations concerns. State and local perceptions of agriculture can include views about farm size and production methods, including animal welfare and environmental issues. One would assume that dairy farmers would prefer to locate in places where the population was more understanding and accepting of modern production practices. Finally, many states have incentive programs, often in the form of tax breaks, with the intention of attracting dairy farms.

We also included location factors that would relate to family situations including average cost of living and proximity to family. While not an exhaustive list, these location decision factors represent key aspects from past research as well as the contemporary issues in the U.S. dairy farm industry.

The survey was conducted at the Elite Producer Business Conference organized by Dairy Today in November 2013 in Las Vegas, Nev. The sample was not intended to be representative of the general U.S. dairy farm manager population. Dairy farm managers attending this conference have much larger herds and are more likely to have expanded or relocated a dairy herd than the “typical” U.S. dairy herd manager. So, while it is important to keep in mind that the survey results are biased in that direction, we believe that the experiences and opinions of these managers are particularly relevant as they bring understanding to the issue of dairy siting and its related economic activities. Also note that large dairy operations have a major impact on local economies and produce a disproportionate share of U.S. milk.

The survey was distributed to conference participants and completed by 105 people who represented 60% of attendees. Table 1 summarizes the operator and operation characteristics of these respondents. As expected, the respondents operated very large operations with an average of more than 3,600 milk cows and 2,700 replacement heifers on more than 2,500 acres operated. For comparison, the average milking herd with a license to ship milk in 2013 was about 195 milk cows (USDA, National Agricultural Statistics Service, 2014a). About two-thirds of respondents had relocated or expanded their operations with half of those occurring in the past decade. The respondents were from 19 states. The states were placed in regions: Northeast (Connecticut, Maine, New York, Pennsylvania, and Vermont), Upper Midwest (Indiana, Michigan, Ohio, South Dakota, and Wisconsin), Southeast (Florida), Mountain (Idaho, Colorado, and Utah), Southwest (Arizona, New Mexico, and Texas), and Pacific (California and Washington). Table 2 displays the percentage of farms that moved “from” and “to” each region. Note that the majority of farm operators had expanded and “relocated” within their respective regions. Eleven percent had relocated to the United States from Europe or Canada.

In addition to questions about the farm and farmer characteristics, respondents were asked to assess the 25 location decision factors discussed above and rate each from 1, “not important,”  to 5, “critically important.” Figure 2 displays the location decision factors as box and whisker plots. Box and whisker plots are a convenient way of graphically depicting groups of numerical data. The center line is the median response while the grey box shows the 95% confidence interval. The plots display 25% of non-outliers in each of the whiskers. 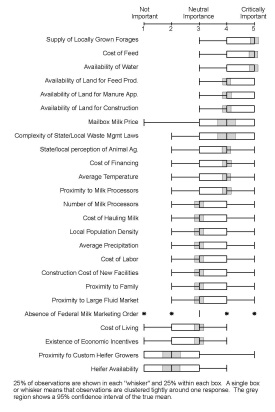 Looking at the average values and the distribution of values it was clear that there are several tiers of importance in these location decision factors. The first tier included the top three factors which scored a median of 5 or “critically important.” These factors were related to feed and water. Reflecting the experiences of high feed costs and droughts in recent years, supply of locally grown forages was the highest rated factor on average. Feed cost was, on average, the second most important factor which would include forage costs but also concentrates. Dairy farmers have little influence over the milk price received other than quality bonuses. Thus they must focus on cost control and feed is the single largest expense, often accounting for more than 50% of total cost. The droughts of recent years, particularly in the milk producing areas in California and the Texas-New Mexico border, have resulted in increased feed costs as producers in those areas imported feed from other regions. The third factor in the top tier was the availability of water which relates to both cows and crops. This top tier of factors was consistent across regions, herd size, and percent of feed purchased by the operation.

The second tier was comprised of nine factors with a median importance of 4. These factors were land, milk price, manure management laws, public perceptions, financing costs, temperature, and proximity to milk processors. The 11 factors in the third tier of importance included a broad range of milk marketing, cost, and personal considerations. Note that the reason the FMMO plot looks different is because almost all answers were a 3, so the boxes collapsed into a single line. Finally, in the bottom tier, the heifer-related factors were the only ones to have more than 50% of respondents score as unimportant.

These results indicate that large, commercial dairy farmers looking to relocate or expand in 2013 were focused on feed, water, and land issues. These decision factors tend to favor the Midwest, Lake States, and Northeast regions of the country and away from population growth in the Pacific, South, and Southwest regions. Marketing costs and considerations in relation to consumer location are no longer key considerations. Further, economic incentives were not ranked high in a relative sense. Thus it would appear that farm location decisions today are primarily a function of the natural resource availability in a state or region leading to a relative movement back towards “traditional” milk-producing regions.

Archwamety, R. (2006, June 8). Dakotas Recruit Dairies from Near and Far to Grow Industry.