Adaptation as defined in Intergovernmental Panel on Climate Change (IPCC), (2014) is the process of adjustment to actual or expected climate and its effects. In human systems, adaptation seeks to moderate or avoid harm or exploit beneficial opportunities. Climate change is likely to be a large challenge for the agricultural sector and society over the next 25 years and requires a large amount of effort be directed to adaptation options. 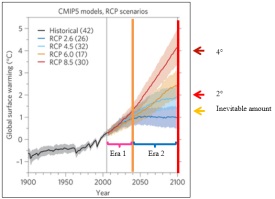 Source: Adapted from Knutti and
Sedláček, (2013) with the vertical lines,
arrows and era markings added for
exposition here.

Rose (2015) makes an argument for the inevitability of climate change. There are also magnitude and timing arguments that can be made (McCarl, Norton and Wu, 2015; IPCC, 2014)  In particular, the IPCC future projections (IPCC, 2013) are summarized in Figure 1 and show temperature change under four alternative emission scenarios (called Representative Concentration Pathways, or RCPs).  IPCC (2014) considered these projections and formed alternative futures as represented by the vertical lines and arrows that appear in the Figure.

Two eras of climate change are portrayed in Figure 1. Era 1 is the period between now and 2040 and Era 2 the time period between 2040 and 2100. Also note that the data in the black line represents actual historical observations to date showing past change in climate.

During era 1, the next 25 years, climate change follows one basic path regardless of mitigation effort with the amount of warming essentially the same across all emission scenarios at about 1°C for 2040.  Agriculture will likely confront this inevitable amount of temperature change and must prepare to adapt to it.  Beyond that the emission scenario results diverge depending on mitigation effort (where RCP8.5 has much less effort than say RCP4.5).  Neglecting the unrealistic RCP2.6 case, the era 2 cases show a temperature change spanning between 2 and 4 °C.  Thus the adaptation challenge—How can agriculture prepare itself for a 1°C change in the next 25 years and 2-4°C degrees by the end of the century?

Nature of Possible Adaptations and Roles

Some of these items have public good characteristics in that individuals will not readily invest in them as they cannot fully capture the benefits while others are beyond the capabilities of individuals or are much more expensive than an individual can afford—such as developing new crop varieties, building a sea wall, providing extension information, financing insurance (Mendelsohn, 2000). This introduces two forms of adaptation: private/autonomous and public, or also known as planned in the climate change literature.  The private adaptations are those that individuals undertake in their own best interests while the planned are implemented by governments, Non-Governmental Organizations (NGOs) and others in the social interest.  A list of possible adaptation categories with an indication of whether the actions will be public or private follows:

Adaptation and Agriculture: Status and Concerns

Source: Based on historical data from
Attavanich et al., 2011.

Agriculture is fundamentally an adaptation enterprise with different production systems arising geographically in response to local climate and other conditions. However, most of the adaptation actions that have arisen have been tailored to a stable, but variable, climate and have been in place for a substantial time period. Nevertheless, recent climate change related adaptations have been observed with changes in crop mix (Figure 2—Attavanich et al., 2011)—which is an update of Reilly et al., (2003), land use (Mu, McCarl, and Wein, 2013) and livestock breeds (Zhang, Hagerman, and McCarl, 2013) among many other items.

First, there are agricultural systems that currently have an adaptation deficit in that there are unused beneficial adaptations which could yield improved performance under current climate conditions.  Economically such deficits are rational if the local costs of implementing an adaptation strategy considering scarce resources exceed its benefits.

Second, some adaptation actions may lead to maladaptation when their implementation worsens adaptation status of the parties undertaking the adaptation, parties elsewhere or parties in the future. For example, actions may be poorly designed where, abandoning a risk managing diversified agricultural system in favor of a growing single high valued crop may worsen performance in a variable climate (McDowell and Hess, 2012).  Similarly, protecting one area from flooding may worsen it in other areas.  Finally, current activities may enhance adaptation for short time but then worsen it in the future. For example, installing a sea wall that protects against a 100 centimeter sea level rise would encourage added investment in the protected area would certainly place more assets at risk when the sea level rise exceeds one meter.  From an economic viewpoint maladaptation is not unexpected and one would consider whether the local gains to those adapting now exceed the losses to those whose adaptation is worsened with consideration of discounting.

Third, adaptation is likely to be less effective the more climate changes and the more invested in adaptation (Parry et al., 2013).  Economically this implies diminishing marginal returns to climate investment.

Fourth, there will be residual damages as adaptation cannot economically or technically overcome all climate effects in a meaningful time period.  This is especially true of irreversible effects like glacier melting or species extinction.  From an economic viewpoint residual damages are rational when the marginal costs of reducing the damages exceeds the amount of the damages.

Fifth, adaptation activities are going to be highly localized with a no global prescriptions possible for adaptation to specific strategies but rather a tailoring of strategies to local conditions uniformly needed.

Figure 3: The Narrowing of Adaptation
from the Space of All Possible
Adaptations to What Will Be Done 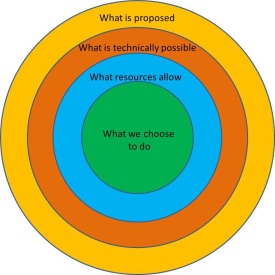 While many forms of adaptation are possible not all will ever be employed due to limits and attitudes.  Following discussion in IPCC, 2014 chapter 17, a conceptual way of considering the causes of a gap between potential and implemented adaptations is portrayed in Figure 3.

Total Costs and Burden of Adaptation

Globally, adaptation is likely to be a costly enterprise.  The IPCC (2014) chapter 17 reviews the few available estimates of global costs and indicates that, for agriculture, they range from $7-8 billion U.S. Dollars (USD) per year with much of the cost in low income countries.  On the other hand, global estimates of the expenditures in 2011 are estimated at $244 million USD (Elbehri et al., 2011) showing an underinvestment gap. Note these are crude estimates as discussed in IPCC, 2014 Chapter 17, but nevertheless, they show adaptation will be expensive and the adaptation deficit may well be growing.  They also point out the need for global participation in adaptation financing particularly since it has been argued that the burden should be borne not only by those adapting but also by those emitting greenhouse gasses (GHG) who are also wealthier (Delink et al., 2009).

Mix of Adaptation and Mitigation 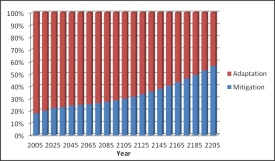 Climate change effects can be reduced through both mitigation and adaptation.  The question is, what is the appropriate mix?  The material above shows that mitigation—emission reduction—does not have major effects until post 2040 so adaptation is certainly appropriate today.  However sole reliance on adaptation leads to diminishing returns and effectiveness.  Furthermore, money spent on mitigation or adaptation precludes levels of investment in other items such as infrastructure or research and development plus trades off with consumption.  Thus the issue is: What is the appropriate level of climate investment versus traditional consumption and investment considering the effects that climate change would have on well being?  Wang and McCarl, (2013) studied this in a global modeling setting.  They found that there was an optimum mix that included both adaptation and mitigation where adaptation constitutes more than 50% of the total climate related investments until 2200 but mitigation dominates thereafter (Figure 4).  Naturally there are a lot of assumptions behind this and one should not rely on the quantitative results  but it does show qualitatively that adaptation is dominant in the near term with mitigation taking over as the climate change gets larger.

Adaptation is clearly a principal and inevitable concern.  Agricultural leaders and others need to prepare for a 1°C change in the next 25 years and 2-4°C degrees by the end of the century.  Many strategies are possible and there is a strong need for both private implementation and public facilitation.  Additionally, in cases, we may need to adapt systems that previously were unmanaged and natural. Clearly not all potential adaptations will be implemented with practicality, resources, attitudes, and objectives determining the mix put on the ground.  Today adaptation appears to be the dominant short term strategy but investment is low relative to needs and an adaptation deficit is likely growing.  The real issue is will we keep up with adaptation avoiding a large deficit and excessive residual damages plus avoid cases of gross maladaptation.