What Policy Options Seem to Make the Most Sense for Local Food?

Visiting farmers markets every Saturday becomes a regular trip for many local residents and visitors. Individuals living in northeast Vermont, for example, have undoubtedly cultivated a sense of “local food”. These trips have led to significant growth in the activities of farmers markets across the states, and have generated ripple effects to benefit surrounding enterprises and communities. Many of the interactions between producers and customers—the majority of whom are passionate about local food—often lead to discussions about designing, creating, and improving local food networks across states and regions. Often the discussion involves policies that either support or hinder the development of farmers markets or other initiatives, such as permits, acceptable payments, insurance requirements, labeling issues, and food safety. Farmers markets are only one of the fast expanding dimensions of local food development. Many new initiatives at the federal, state, and local levels have been discussed, designed, planned, and implemented to support the local food movement.

An Overview of Federal Initiatives

Between 1994 and 1998, the U.S. Department of Defense (DoD) proposed and implemented a program called the Fresh Program that began buying local food for schools and hospitals.  An original purpose of the Fresh Program was to take advantage of unused trucking capacity in DoD.  The Fresh Program partnered with the U.S. Department of Agriculture (USDA) to acquire fresh produce for state institutions with preferences given to local small and medium-sized farms in each state (USDA, Food and Nutrition Service (FNS), 2010a and 2010b).  Since 1996, a series of acts were passed by the U.S. Congress to promote and support local food purchases such as the Community Food Security Act, the Community Food Project Program, the Community Food Security Initiative, and local wellness programs focused on building local food into a part of a healthy eating solution (Kantor, 2001; Starr, et al., 2003; Hamilton, 2005; Matteson and Heuer, 2008).  USDA’s FNS administers two programs that promote the use of farmers markets and are available in most states: The Women, Infants, and Children's Farmers’ Market Nutrient Program and the Senior Farmers’ Market Nutrient Program (Hamilton, 2005).

The USDA introduced a new initiative in 2009, Know Your Farmers, Know Your Food, to promote sustainable local and regional food systems.  This initiative aims to support small and mid-sized farms and ranches, to strengthen the connections between farmers and consumers in rural communities, to promote healthy eating, and to protect our natural resources (USDA, 2009).  In 2012, the USDA allocated and released $9 million in grants through the Farmers’ Market Promotion Program to support over 8,000 farmers markets through various organizations across 39 states, the District of Columbia and Puerto Rico to support projects that will improve the connection between agricultural producers and their consumers (USDA, 2012).  Between 2009 and 2012, USDA granted 89 Community Food Project awards, 56 Beginning Farmer and Rancher Development projects, 440 Farmers Market Promotion Program awards, and 874 Specialty Crop Block awards.

Many Faces of State Initiatives 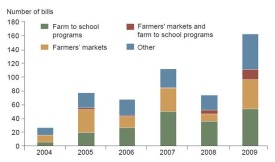 Several state and local governments have followed the USDA’s effort to establish their own initiatives to promote local food purchases. The funding and support of local food purchasing at the state level have grown substantially since 2004.  The National Conference of State Legislatures has compiled a comprehensive, searchable database that lists all of the state’s policies and policy proposals relating to local food purchase since 2004 (Figure 1).  Most of the state level bills promote farm-to-school programs and farmers markets.  A few offer direct incentives to reduce the costs to restaurants that choose to purchase local food as ingredients.

Clearly the federal programs and policies play an essential role in shaping the future of farming and food distribution. Many issues, however, are characterized at the local or state levels given the diversity of culture, history, tradition, community profile, organizational structure, planning priorities, social values and interactions, environmental and ecological factors, and economic incentives. The movement of local foods is nationwide, and the decisions and development paths are driven by state and local governments to target localized issues and needs. A summarized list of state and local initiatives specifically targeting local food issues include:

These initiatives require state and local officials to take advantage of eligibility opportunities in federal programs such as food stamps, to reduce barriers to participation in state anti-hunger programs, to actively promote food stamps and similar programs, and to educate consumers about healthy food choices focused on diet and nutrition management plan.

The state of Tennessee, for example, adopted a law in 2004, Tennessee Public Acts, Chap. # 473, introduced as SB2969, to support local food purchases. The bill requires the state departments and agencies to give preference to Tennessee produced goods and services if they are at least equal in quality and price.  A similar preference is given to vegetation used in landscaping.  Another example is the state of Connecticut passing a Substitute House Bill No. 5508, Public Act No. 11-189 to set up the Governor's Council for Agricultural Development which mandates a means to increase local food expenditures to 5% of total food expenditures by 2020.

Most states with laws on direct farm marketing emphasize creating and managing farmers markets or roadside farm stands. California and New York seem to be two of the strongest examples in supporting direct farm marketing. Other states such as Georgia and South Carolina both offer “Roadside Market Incentive Programs” to give the state Department of Agriculture authority to establish standards for the design and operation of roadside markets. One of the latest examples would be Hawaii’s new law in 2013, introduced as AgriTourism Bill 148, that explicitly assists producers identify opportunities to develop pick-your-own operations, direct delivery of food items to consumers, and other strategies to promote local food.

Louisiana is among the first states to adopt legislation that provides direct financial incentive to local businesses to buy local food as a way to support local agriculture.  More specifically, the Louisiana Buy Local Purchase Incentives Program, passed by the legislature in the spring of 2011, is designed to encourage restaurants to buy local (Louisiana Laws, Revised Statutes, Title 3—Agriculture and forestry, RS 3:284).  The law provides an incentive equal to 4% of their cost to Louisiana restaurants to buy local agricultural products.  The 4% applies to the total cost of Louisiana agriculture products purchased by a restaurant in any year. The law is very specific and inclusive in defining Louisiana agriculture products.

Just prior to the passage of the law, Liang and Dunn (2012)  surveyed  local independent  restaurant owners/managers to identify all food related ingredients that would be utilized by restaurants, based on the types of cuisine offered and sourced in northeast Louisiana.  They also collected information on the perceptions of "local."  Sixty-five percent of the 52 surveyed restaurants were located in urban areas in northern Louisiana, 52% of the respondents had fewer than five full time employees, and over 1/3 of the respondents started their restaurants in the last five years.

Figure 2: Percentage of Restaurants'
Food Costs that is for Local Food

First, respondents were asked to identify what they considered to be "local," even though Louisiana law defined “local food” to be within the state. There were four categories in the questionnaire for respondents to choose from: within 25 miles, within 50 miles, within 100 miles, and not sure; and only one answer should be chosen by each respondent. Twenty-seven percent thought it meant within 25 miles; 25% thought it meant within 50 miles, and finally 27% thought it meant within 100 miles.  Nineteen percent or 10 respondents admitted they did not know what local meant.  Secondly, 52% of the respondents indicated that they purchased local frequently, 19% occasionally, 17% seldom, and 9% never.   Perhaps surprising, in light of the current national interest in local food sourcing, restaurant owners/managers in Louisiana in the survey revealed that customers did not seem particularly interested in local foods, and customers only occasionally asked if local food was used—only 3.8% of the respondents thought that using local foods increased their sales.  Obviously, in passing the Louisiana Purchase Local Incentive Program shortly after the survey was conducted, Louisiana lawmakers believed buying local had important benefits to the state.

Respondents most commonly reported they purchased vegetables locally (80.8%) followed by fruit (50%), seafood (42.3%), poultry (34.6%), drinks and ice cream (26.9%) (Figure 3).  At least 20% of respondents indicated they purchased soy, beef, soda, yogurt, crawfish, and syrup locally, but other items in the local food purchases list were purchased by less than 20% of the respondents. In 2011, none of the respondents were aware of any state initiatives to promote local food. Since the study was done before the Louisiana legislature passed the incentives bill for purchasing local, and knowledge dissemination and purchasing patterns take time to adjust
to new incentives, one would expect local foods to now be a greater share of food costs.

While the majority of the agricultural policies were introduced in the Farm Bill, it would not be reasonable to consider Federal policies as the only guide shaping the future of local food. Federal policies certainly offer critical orientations to lead the movement. It is up to state and local governments and organizations to identify best practices to yield the highest benefits and returns for local communities, considering optimization and tradeoffs between limited resources and alternatives. The role of state and local policies is to coordinate interests and efforts that will (1) meet objectives established by Federal policies as well as serve needs of local stakeholders, (2) initiate entrepreneurial and innovative approaches that leads to problem-solving actions, (3) encourage and incentivize collaborations to exchange information, share responsibilities, and offer support and assistance that will directly improve the wellbeing of the communities, and (4) lead and support educational programs to share information, raise awareness, and provide training for service providers who will directly work with organizations and individuals in promoting local food.

Given all the attention in local/regional food systems, many challenges and important considerations remain in our economic and social environments that need to be addressed at the production, consumption, and distribution levels.

Considerations for Individual Consumers and Households

Finally, there needs to be more cooperation and coordination among local, state, and Federal agencies in designing, planning, and implementing local food initiative. Gaps in developing local food initiatives may present more barriers to producers, particularly small family farms, in seeking and developing innovative opportunities. Some states or regions obviously are more advanced in creating local food programs, while others are still trying to figure out what to do. Raising awareness and providing timely educational materials to share across agencies and geographical areas seem to be the most critical steps to establish effective and efficient solutions in dealing with local food issues.