Risk and the Use of Contracts by Vegetable Growers

Contracts have become an increasingly important tool in agriculture over the last several decades, covering approximately 40% of agricultural production by value in recent years in the United States (MacDonald and Korb, 2011). Contracts are one of several options for organizing agricultural production and often determine which crops and other products will be produced, what kinds of inputs and production methods will be used, and when and where those products be delivered. In terms of coordination between the producer and buyer, contracts occupy a middle ground between spot markets—with little or no coordination—and full vertical integration—in which the producer and the processor or other downstream user share common management and ownership.

The usage of contracts varies widely by agricultural commodity. Some agricultural outputs—such as poultry, hogs, tobacco, and sugar beets—are dominated by contract production. The specific type of contracts used also varies across commodities. For example, poultry and hog production make extensive use of production contracts, in which the buyer specifies many aspects of production and often retains ownership of the commodity throughout the process. Marketing contracts, on other hand, focus more on the end product, specifying price, schedule, and quantity and quality of the commodity to be delivered.

Understanding the reasons that producers and buyers choose to use contracts, as well as the potential pitfalls of that use, can improve the parties’ ability to make effective use of this tool. Such knowledge will also benefit policy makers charged with ensuring the smooth functioning of agricultural markets.

Agricultural producers face several different types of risk. Production risk refers to uncertainty in the quantity and quality of output. Growers’ yields are affected substantially by factors beyond their control, including fluctuations in weather, pressure from disease or other pests, and varying availability of essential inputs such as irrigation water. Producers may also face uncertainty about production costs, due to fluctuating prices for inputs such as labor or fuel. Market risk refers to uncertainty about the price that producers will receive for their crops or livestock, and also the possibility that no buyer can be found at all, also known as placement risk.

These various risks can be magnified in some types of agricultural production. For example, fresh fruit and vegetables are highly perishable crops for which quality attributes can be especially important. These characteristics may limit a vegetable grower’s ability to conduct an extensive search for buyers or better prices, thus rendering the grower more vulnerable to volatile prices at the time of harvest.

Managing Risk and Other Reasons for Using Contracts

Agricultural producers use a range of tools to manage these risks. Contracts are commonly cited as one of these tools, especially for managing market risks. A simple forward contract establishes a price to be paid for a certain quantity of product at some date in the future. From the grower’s perspective, this arrangement reduces uncertainty about the price received for the product and the availability of a buyer.

Contracts may also be used to manage production risks. In a production contract, a grower’s payment may be directly tied to services provided, rather the quantity or quality of output, thus shifting risks associated with uncertain yields to the buyer. With a relative performance contract, or tournament contract, a grower’s production is compared to that of other growers in the area, with bonuses for outperforming or penalties for under-performing that benchmark. This type of incentive structure, while controversial, can mitigate some aspects of production risk, such as adverse weather that affects all producers in a region.

In economics, traditional contract theory builds from this idea that contracts are used to manage risk by shifting it from a more risk-averse party to a more risk-neutral one (Allen and Lueck, 1999; Hueth and Hennessy, 2001). In this framework, a key issue is balancing the advantages of this risk-management feature against potential problems created by the use of contracts, such as moral hazard—for example, when one party in a transaction knows more information about risks than the party incurring the consequences of a choice—or other misaligned incentives. However, the empirical evidence that agricultural contracts are used primarily for risk-shifting is mixed (Allen and Lueck, 1995). It may be that producers employ other methods for managing their various risks, and that contracts are used to create other advantages.

Producers have access to a range of tools for managing risk, in addition to contracts, with downstream users of agricultural commodities. Growers may be able to purchase crop insurance or participate in programs deigned to stabilize agricultural revenues. For many commodities, price risks can be hedged in financial markets. For example, Mark et al. (2008) discuss some options, other than forward contracts with intermediaries, that grain growers use for managing price risk. Membership in a marketing cooperative can help to smooth price volatility for growers in a region. To deal with production risks, growers can choose different management strategies, such as using drought- or pest-resistant crop varieties or diversifying production across different commodities.

Contracts can provide benefits other than risk management. They will be chosen over other options—spot markets or vertical integration—if they do a better job of lowering transaction costs or coordinating agricultural production with the needs of the buyers. For example, if a buyer needs a reliable supply of a commodity on a schedule, then contracts may better serve the grower-buyer relationship than do spot markets. Contracts also facilitate the marketing of products with high-value attributes, such as organic, locally grown, or compliance with buyer-driven animal welfare or environmental standards. When such attributes are hard to verify by inspection of the physical output or cannot be monitored via third-party certification, contracts help to assure buyers that the products meet their requirements and ensure that growers are compensated for those efforts. Contracts can also provide incentives for growers to invest in equipment and capital that will improve the quantity or quality of production, especially in terms of meeting buyer-specific requirements (MacDonald et al., 2004), and may facilitate credit financing of such investments.

Although contracts can provide certain benefits, they can also create problems in some cases. For example, when production is coordinated primarily by contracts, spot markets become “thin” and a lack of good price information can hamper the marketing of agricultural commodities. In addition, the use of contracts can exacerbate disparities in market power or bargaining skill, often to the detriment of growers (Nagler et al., 2015). These issues and others sometimes spur interest in regulating or restricting the use of contracts in agriculture.

While economics offers a logical framework for considering a grower's choice to use contracting in the abstract, it is especially informative to empirically examine how growers use contracts to manage their risks.  Of course, this will vary by the grower and commodity, as well as the regional supply and demand factors at play in the market. Tomato production, for example, is a strong candidate for considering whether risk management is a primary factor in a grower’s choice to use contracts rather than rely on spot markets to sell the output.

U.S. growers produce over $2 billion of tomatoes per year, with approximately 90% of those sold for processing and the remainder sold as fresh (USDA, 2012). These two markets are fairly distinct, using different tomato varieties and harvesting methods. Processing tomatoes are grown primarily in California, with over 90% of production. Processing tomatoes are produced mostly under contract, with such production accounting for as much as 97% of the processing tomato crop in California in the mid-2000s (Goodhue et al., 2010). Fresh tomatoes are grown across the United States, although the majority are produced in Florida and California. Other major sources of production are Virginia, Georgia, Ohio, Tennessee, North Carolina, New Jersey, and Michigan. Fresh tomatoes are sold primarily through spot markets.

The risks faced by fresh produce growers may be magnified by the perishability of their products, and some risk-management options, such as price- and income-support programs and futures markets, may be less available to these growers (Cook, 2011; Hueth and Ligon, 1999; Ligon, 2001). Vassalos and Li (2014) and Vassalos et al. (2013) investigated the factors that fresh tomato growers in four states— Illinois, Indiana, Kentucky, and Ohio—find important in deciding whether to use marketing contracts for some of their output. Chief among the questions examined was what role risk aversion—preferring a smaller but certain reward to a larger-on-average but uncertain reward—played in whether those growers preferred to use contracts. 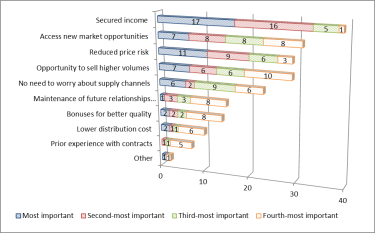 Figure 1 reports the most important factors tomato growers in the study thought might encourage them to use contracts. Two ideas related to marketing risk—reduced price risk and secured income—were selected by most growers and ranked very highly in importance. In short, the growers believed that risk management is an important function of marketing contracts.

Economists use a variety of methods for measuring risk aversion, two of which were employed in the tomato study. The first was a straightforward, self-reported measure following the approach of Pennings and Garcia (2001). The second method follows the approach of Binswanger (1980, 1981). Each participant was asked to make a hypothetical selection from among several tomato varieties with varying susceptibility to disease. The growers' choices indicate their trade-offs between disease risk and payouts. In other words, the participant’s choice implied a numerical estimate of his risk aversion level.  Once risk aversion is measured, it can be used to test its relationship with tomato contract terms, such as a higher base price in exchange for accepting a provision that penalizes growers for failing to meet volume requirements.

The key result of this analysis was that risk aversion had little or no effect—after controlling for the terms of the contract, such as price, quantity requirements, and delivery schedule—on whether growers chose to use contracts for a portion of their tomato production. This finding casts some doubt on the idea that contracts are chosen primarily for their risk management features, at least for this particular region and agricultural commodity.

These results for tomato contracting are consistent with the mixed evidence found by other researchers for risk management as a primary function of contracts. For example, Allen and Lueck (1999) present evidence that risk-sharing is not an important motivation in agricultural land contracts in the United States. Hudson and Lusk (2004) use a choice experiment and find that the use of contracts is related to both risk management and the reduction of transaction costs. Dubois and Vukina (2004) present evidence that risk aversion among producers does affect the terms of production contracts in hog production. For example, producers with lower levels of risk aversion were assigned larger numbers of hogs to raise.

If the risk-management function of contracts may not be as dominant as is commonly believed, then what are the implications, for both the private parties and policy makers? Contracts should be viewed more broadly as a tool for coordinating activity and managing the relationship between the producer and buyer, rather than merely a risk-management mechanism. Both private parties and policy makers should pay attention to the other functions and benefits provided by contracts, as well as considering other mechanisms for managing agricultural production and marketing risk. In addition, as Hueth and Hennessy (2001) discuss, it may be optimal for agricultural producers to bear some of the risks associated with production, and be rewarded for doing so, rather than pursuing a wage-like “fee for service” arrangement.

Hueth, B., and D. A. Hennessy. 2001. “Contracts and Risk in Agriculture: Conceptual and Empirical Foundations.” Paper prepared for presentation at the SER-IEG-31 meetings on “A Comprehensive Assessment of the Role of Risk in Agriculture,” Gulf Shores, AL, March 22-24, Available online: http://www.aae.wisc.edu/hueth/papers/foundations.pdf