The Food Safety Modernization Act and Production of Specialty Crops

On January 4, 2011, President Barack Obama signed into law the Food Safety Modernization Act (FSMA).  This is the first comprehensive reform of the Food and Drug Administration (FDA) food safety policy since the Federal Food, Drug, and Cosmetic Act enacted in 1938, although food safety programs of the U.S. Department of Agriculture’s Food Safety and Inspection Service (FSIS) and the Environmental Protection Agency (EPA) had been modified in the interim.

The most important policy change contained in the FSMA is that it authorizes and mandates FDA to require comprehensive, science-based preventive controls across the food supply, including the growing, harvesting, packing, and holding of fresh fruits and vegetables.  The final proposed rule for produce safety, Standards for the Growing, Harvesting, Packing, and Holding of Produce for Human Consumption (Final Rule), published on November 27, 2015, sets standards regarding agricultural water; biological soil amendment; sprouts; domesticated and wild animals; worker training and health hygiene; and equipment, tools and buildings, among other things (FDA, 2015a).

Before and during the development of the Final Rule, significant discussion involved the potential economic impacts of the FSMA on the domestic production of specialty crops, such as vegetables. Three of the major specialty crop states are California, Florida, and Texas.  In particular, discussion revolved around the types of farms that would be exempt from FMSA.  However, Ribera et al. (2012) concluded that the costs incurred by producers due to produce food outbreaks appear to be far greater than those involved in preventing such incidents.

The Food Safety Modernization Act and the Final Rule

The Final Rule became effective January 26, 2016.  A detailed summary of the Final Rule’s provisions can be found in FDA, 2015a, and 2015b.  The Final Rule applies to all fresh produce farms with annual sales over $25,000—farms with produce sales of $25,000 or less are exempt.  Also exempt, due to a provision introduced by Senators Jon Tester and Kay Hagan, are farms with total food sales of less than $500,000, based on a three-year average, that sell the majority of food directly to a qualified end-user located within the same state or within 275 miles from the farm.

Table 1: FDA Accounting of Farms to be Covered by FSMA
Source: NASS, 2007 Census of Agriculture.

The FDA (2013) reported that 40,211 farms, excluding sprouting operations in 2013, would be covered.  All farm numbers were calculated from the National Agricultural Statistic Service (NASS) 2007 Census of Agriculture. Table 1 shows that 67% of these were categorized as very small farms, 12% small, and 21% large.  In terms of produce acreage, there were almost 4.5 million acres covered, 10% of which were operated by very small farms, 9% by small farms, and 81% by large farms.  As expected, there were many more very small and small farms than large farms, but large farms account for the lion’s share of covered acreage and had higher average food sales per farm.

What Do We Know about FSMA Impacts on Cost and Profitability?

One way economists use to evaluate the impacts of policies on farms is through the development and analysis of so-called “representative farms.”  Representative farms are virtual farms developed by a panel of producers for a specific crop or crop mix at a specific location.  In some cases, existing regional-specific cost and return budgets were updated to include the most recent data for prices, yields and related production expenses and subject to review by farm advisors.  The constructed farm represents the typical cost of production, revenues and common production practices for a specific crop in a specific area.  In order to consider impacts from FMSA, representative farms were developed for cabbage, cantaloupe, citrus, onion, spinach, tomato, and watermelon production, where applicable, in California, Florida, and Texas (Ribera et al. 2014).  Table 2 shows three different sizes of farms used to analyze the impacts of FSMA requirements by farm size.  The three representative sizes were for a small farm with annual sales less than $250,000; a medium farm with annual sales between $250,000 and $500,000; and a large farm with annual sales over $500,000, measured as annual sales of a specific crop. 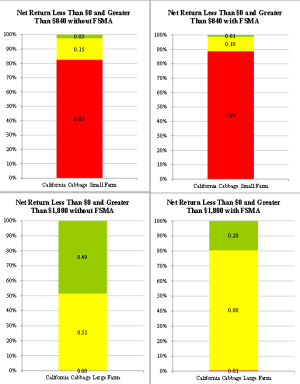 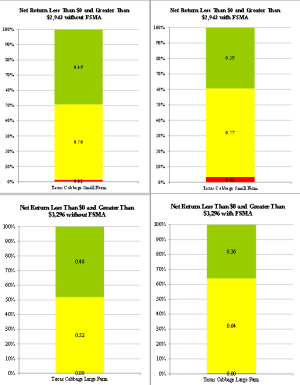 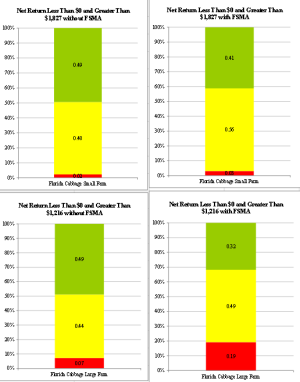 Table 2 shows the average cost of production per acre for the representative farms, excluding any food safety compliance costs.  It is important to note that most producers in the panels reported that most of the compliance costs associated with FSMA were already covered by their own Good Agricultural Practices (GAPs) and Good Handling Practices (GHPs) programs.  For example, in the case of leafy green producers in California, these producers already abide by the California Leafy Green Handler Marketing Agreement.  In almost all the farms in table 2, regardless of location and crop produced, larger farms have lower cost of production per acre, displaying economies of scale.  The only exceptions are the medium and large onion farms in Texas where the large farms reported higher cost of production than the medium sized farms.  Also, there seems to be diminishing economies of scale between medium and large farms compared to small and medium.

Figures 1, 2, and 3 show the results of the analysis of the impacts on the profitability of selected representative farms by comparing results without and with FSMA compliance costs in the cost of production.  Profitability is measured as the 2013-14 net present value of after-tax income, per acre. Only results of cabbage farms in California, Texas, and Florida are included in this article in the interest of space; however, the results from the other crops listed above follow the same pattern.  All representative farms were developed with historical prices and yields used to simulate production and marketing risks, so the results on costs and returns with FMSA compliance are statistically derived estimates.  Therefore, the bars indicate the probability that profitability will fall between the average return, without and with FSMA compliance costs.  In other words, red represents the probability of losing money, yellow represents the probability of falling short of average net returns, and green the probability of exceeding the average net returns.

Figures 2 and 3 display the results for Texas and Florida, respectively.  Although the size and cost structure vary by state, similar qualitative impacts were found in Texas and Florida, as described for California cabbage production.  The profitability of representative small farms is more negatively affected than the profitability of representative large farms under FMSA.  Also, the level of the impact of FSMA compliance costs varies significantly among different states as well.  For example, the source of irrigation water, either surface or underground, has to be treated differently, as surface water has higher chances of having a higher microbial count; therefore surface water needs to be tested more often, which increases FSMA compliance costs.

Other studies using different research approaches for different commodities and regions report similar findings.  An FDA (2013) study found that the average FSMA compliance cost is considerably higher for small farms than for large farms.  They reported that the average compliance cost as a percentage of average production values for very small farms was 6.3%, 4% for small farms, and 1.2% for large farms.  Similarly, Lichtenberg and Tselepidakis (2014) considered the impacts of FSMA compliance costs on different farm sizes in the Mid-Atlantic region that produce leafy greens and tomatoes.  Their report indicates that all the practices under the Produce Rule, except possibly field inspection for flooding and wildlife encroachment, exhibit increasing returns of scale, meaning that costs rise less than proportionally with product acreage.  As a consequence, the burden of complying with the provisions of the Produce Rule—measured by food safety cost as a share of production cost—is much lower for large operations than for small ones.  These findings provide some justification for the small farm exemptions and extended phase-in times proposed by FDA.  However, they do not account for the risk of food safety outbreaks that could come from farms that are exempt from FSMA compliance due to size, marketing channels and distance from farm to consumers, as is the case with the Tester-Hagan exemption.

Not the Final Step

The FSMA is an important step toward a modern science and risk-based approach to food safety, but it most certainly is not the final step.  The cost of compliance with the new FSMA rules does not appear to be size neutral and can have negative impacts on the profitability of small farms, exacerbating difficulties for those producing relatively risky commodities.  For large enterprises, the additional cost is small relative to revenue and appears to have small effects on the probability of overall profitability.  Moreover, innovations and new technology could help reduce the impacts of FSMA compliance costs for all farm sizes.  Regardless, the cost of produce outbreaks outweighs the additional cost incurred to comply with FSMA regulations.  Substantial care will need to be taken in designing implementation strategies that minimize adverse structural impacts, such as considerably reducing the number of small farms and/or diversity of farms, while reducing the risks of foodborne illness.