Federal Forest Policy and Community Prosperity in the Pacific Northwest

Forests and forestland are a key component of wealth in the Western United States. The ownership and use of this natural capital has an enormous impact on development and prosperity in the region, particularly in rural communities. Economic returns to forests can be realized either through harvest of logs, which provide earnings from sales of wood products; or through forest protection and development of amenity values, which provide earnings from sales related to recreation and/or amenity-related residential decisions.

Since much of the forestland in the West is owned by the federal government, Federal forest policy decisions are very important in the rural Western United States. Starting in the late 1980s and early 1990s, Federal forest management policy in the Pacific Northwest began to emphasize habitat protection and reduced the timber harvest on Federal lands.  This article examines how this major policy shift affected the prosperity of rural communities in this region, and particularly how the policy shift differentially affected various types of communities. 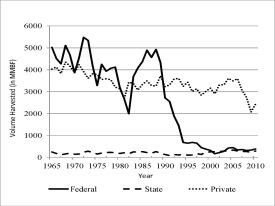 The Northwest Forest Plan (NWFP), put into place in 1994, established a new forest management framework for the 24 million acres of Federal forestland in Washington, Oregon and California within the range of the Northern Spotted Owl. The NWFP reduced commodity production on public lands in order to protect old-growth trees and provide habitat for the spotted owl and other threatened species. This policy shifted 11 million acres of federal forestland from timber production to old-growth forest protection. In Oregon, more than half (51%) of the state’s land—and almost 60% of the state’s forest land—is under federal ownership. Implementation of the NWFP speeded up a decline in timber harvests that had begun in Oregon in1990 (Figure 1). In 1989, almost 5 billion board feet of timber was harvested in Oregon on Federal land managed by the U.S. Forest Service and the Bureau of Land Management. The figure steadily declined to less than 200 million board feet in 2001, and has averaged less than 330 million board feet per year during the most recent decade. Oregon harvests on private timberland during the 1980s, 1990s and early 2000s, meanwhile, continued to average over 3 billion board feet a year. 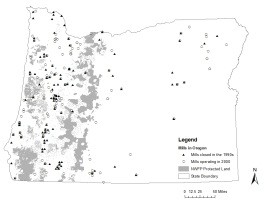 The wood products industry in the Pacific Northwest had been in the midst of massive structural change over the decades since the 1980s. In 1980, for example, there were 405 lumber mills in about half (113) of Oregon’s communities. Two thirds of these mills (282) closed during the following three decades, and by 2007 there were only 58 mill towns in Oregon. Figure 2 shows the location of mills and mill closings in the 1990s. For Oregon’s small communities, mill closures can be expected to deal a serious blow to community employment. The average direct job loss per mill closure was about 100 jobs. Since the median population of Oregon’s communities is under 2000, a mill closure could be expected to have a significant impact on a community’s viability.

How has the shift in federal forest policies away from timber harvest toward preservation of natural capital (forests) affected population growth, growth in real property assets (built capital) and median household income in the Pacific Northwest? This article begins with a review of what is known about the impact of timber harvest reductions and enhanced natural amenities on local prosperity and reports new findings on the impact of the Northwest Forest Plan on rural Oregon communities.

The local economic impact of the reduction in Federal timber harvests has been the subject of much research. Chen and Weber (2011, 2012) provide a summary of this research, which has analyzed impacts of the timber harvest reductions and the NWFP on both loss of jobs and on amenity-driven migration. Almost no attention has been paid to possible impacts of forest policy changes on real property wealth or incomes.

The studies generally support the conclusion that the timber harvest reductions and NWFP reduced employment in the affected counties, and in some cases nearby counties. Both ex ante impact studies of the region and case studies of particular communities have found job losses and other economic damages to result from policies such as the NWFP.   Estimates of the employment reduction due to NWFP range from 13,000 to 147,000 jobs.

Some studies have considered the possibility that resource conservation policies may create amenities that enhance the attractiveness of the nearby communities and create jobs associated with forest-based recreation, leading to rural community population and job growth. In an analysis of effect of the NWFP on county employment growth and net migration, Eichman et al. (2010) found that NWFP did in fact reduce employment in the region and also slightly increased net migration, but that this small positive net migration associated with the NWFP did not offset the negative effect on employment.

Other studies of the effect of amenities on income and wealth have produced conflicting results. Some studies suggest that income levels in amenity rich communities tend to be lower because people are willing to accept lower wages in places with higher natural amenities. Several papers investigating individual location decisions found that amenities in and outside the metropolitan area generate compensating wage and land value differentials because workers are willing to accept lower wages and pay higher rent.

Previous research, primarily at the county level, is summarized in Table 1. It suggests that the Northwest Forest Plan had a negative impact on employment and a small positive impact on population growth. It also indicates that amenities have a positive effect on both employment and population. Property wealth and incomes impacts are not clear.

NWFP Impacts at the Community Level

The NWFP, by reserving more forestland for conservation and reducing the timber available to harvest, had two conflicting effects: it enhanced economic opportunity in many Oregon communities by enhancing the natural amenities in the region, and it reduced economic opportunity by decreasing the supply of logs for harvesting and timber processing. Most, if not all, of the studies reviewed above used county-level data. Since counties in the Western United States are quite large, studies using county data may not capture spatially differentiated effects of a multi-faceted policy change that occur at a smaller geographic scale. Because we used community-level data, we were able to determine how the harvest-reducing and amenity-enhancing effects of Northwest Forest Plan affected different types of communities. We used community-level data to examine the impact of the NWFP on population growth, change in real property value per capita and median household income in Oregon’s 234 rural communities—incorporated cities with less than 50,000 people.

Some part of the negative effect of Federal resource conservation policies on a given community is likely related to whether the reduction in harvest affects mill operations in the community. Because the mills are not necessarily close to the forests that supply them with logs, some negative effects of reducing harvests on federal timberland are not confined to communities close to national forests but are spread across a broader region. We captured this negative effect by examining the number of mills that closed in a community during the period examined.

The positive effect of resource conservation policy on amenity-related growth, in contrast, is likely most pronounced in communities close to the protected land. We investigated the positive amenity effects of the NWFP by identifying communities within 10 miles of the “reserved land”—designated in the NWFP for species protection—as “NWFP-adjacent communities”, and then by examining whether these communities were affected differently than communities outside the 10-mile buffer zone.

The 1990s was a decade of income growth and significant in-migration in Oregon. It was also the decade in which the NWFP was implemented, Federal timber harvests were reduced by 90%, and total timber harvests were reduced by half. The NWFP appears to have increased the growth of real property values in nearby communities, the communities that were within 10 miles of Federal reserved forestland. Our research findings also suggest that the impact of NWFP was different for logging communities than for non-logging communities. (Table 2.)

In NWFP-adjacent logging communities in which loggers are a significant share of the workforce, the negative economic impact of reductions in timber harvest under the NWFP appears to have out-weighed any positive impacts of the amenity-related migration on the growth of real property values and income. NWFP-adjacent logging communities experienced significantly lower growth in real property values and income than other communities. Furthermore, towns with mill shutdowns saw significantly lower growth in property wealth than those without mill closures. To the extent that NWFP caused reductions in logging jobs and increased mill shutdowns, it had a significant negative impact on logging towns and mill towns in the 1990s.

The early 2000s were a time of reduced economic growth and slower in-migration, both nationally and in Oregon, and timber harvests remained at the levels of the 1990s. Mills were still closing, but at a slower pace.  NWFP-adjacent communities continued to benefit from amenity related growth and saw significantly higher growth in real property value than other communities. This was true whether or not the communities were logging towns. And changes in population, property wealth and median income were not significantly different in communities with mill closures compared to communities without mill closures. Whereas in the 1990s, the NWFP effects were detrimental to logging and mill towns, this no longer appeared to be the case after 2000.

The policy of protecting natural capital through implementation of the NWFP appears to have increased community wealth, as measured in real property value per capita of the communities close to the NWFP land, except if they were dependent on logging. Not surprisingly perhaps, Federal forest policy appears to have affected the prosperity of logging and mill towns differently than other types of rural communities. In the 1990s, NWFP had a negative effect on the wealth and income of communities whose economic base had historically been tied to the wood products industry, including mill towns and other logging dependent communities.

After 2000, however, negative logging- and mill-related NWFP impacts appear to have subsided, and the NWFP induced amenity-migration effects continued: NWFP-adjacent communities experienced higher growth in community wealth than communities more than 10 miles from NWFP-protected land, even among those that were dependent upon logging.

The NWFP appears to have redistributed the benefits associated with the federal forestland, and the impact has evolved during the almost two decades since implementation. For timber dependent communities—the mill towns and logging towns—the implementation of the NWFP reduced growth in  community wealth and median income during the initial decade of implementation due to reduced timber harvest in federal forestland. But in the longer run, NWFP appears to have had a more positive impact on the wealth creation in rural Oregon communities, even in those timber-dependent communities that initially went through difficult economic transformations. The associated development may be more sustainable, but that is yet to be determined and is beyond the scope of existing studies. It is possible, of course, that there were also important within-community shifts in well-being between original residents and newcomers as has been found in other studies of amenity-related development, where growth in real property values has priced original residents out of local housing.

Funding for this paper was provided by Economic Research Service under cooperative agreement No. 58-6000-0-0053 and by the Oregon Agricultural Experiment Station. We appreciate the insightful comments of John Pender and Walt Armbruster and two anonymous reviewers.