Over the past decade, soil health has become a buzzword among both farmers and environmentalists. Farmers see healthy soils as a key to agricultural productivity, and environmentalists see healthy soils as the foundation of a robust ecosystem. Although so many people seem to want to boost soil health, soils around the world remain in crisis. Erosion is rampant (Wilkinson and McElroy, 2007), nutrient levels are falling (Jones et al., 2013), and microbial ecosystems are collapsing (Tsiafouli et al., 2015). Why is this happening? And what can we do about it?

Three observations help explain the soil health disconnect. First, soil health is hard to define. This makes it difficult for farmers, agronomists, soil scientists, economists, environmentalists, and policy makers to effectively communicate. Second, each group of stakeholders has a relatively narrow understanding of soil health. For instance, farmers tend to oversimplify the concept, reducing it to mere soil fertility or nutrient content. Environmentalists, on the other hand, tend to conflate optimal land management with maximizing soil health, ignoring farmers’ need to earn a profit. Finally, soil health is fundamentally dynamic. That is, soils’ health evolves slowly over time, responding to agricultural inputs and land management practices. No management technique can magically transform a poor soil into a healthy one; years of steady investment are necessary to see meaningful change.

To design effective and efficient soil health policies, stakeholders need to share (i) a common definition of soil health, (ii) an appreciation of the benefits of healthy soils, and (iii) an integrated model of how physical, chemical, biological, and economic processes relate to one another over time. In this article, I advocate for a holistic definition of soil health, discuss the benefits of healthy soils, and outline a dynamic model of soil health in the agricultural setting that can help inform policy. The model suggests that policy should focus most heavily on making information accessible to landowners: the current state of their soil health, how soil health responds to different management techniques, and how soil health affects crop yield. Additionally, policy makers need reliable estimates of how soil health affects environmental outcomes beyond mere agricultural output. 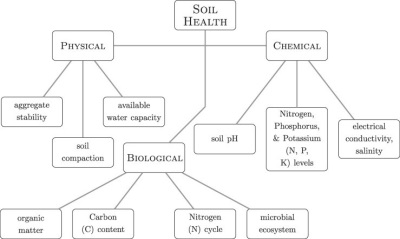 Historically, farmers and agricultural economists have focused on the concept of soil fertility: the capacity of a soil to support agricultural yields. Soil health, however, is broader in scope. It encompasses how a soil affects both agricultural production and environmental sustainability. The Natural Resources Conservation Service of the U.S. Department of Agriculture defines soil health as “the continued capacity of soil to function as a vital living ecosystem that sustains plants, animals, and humans” (Bowman, Wallander, and Lynch, 2016). Although individual definitions of soil health differ, they all divide soils into three primary components: physical, chemical, and biological (Figure 1).

A soil’s physical components relate to the structure of individual soil particles. The healthiest soils are sturdy enough to support a plant’s roots while not being too dense. They also retain sufficient water between their particles for plants’ use while allowing excess water to drain away easily. Soil scientists focus on specific indicators of a soil’s physical structure such as aggregate stability (a soil’s ability to maintain structure when exposed to stress), soil compaction (the density of soil particles), and available water capacity (how much water is held between soil particles). Although a farmer cannot alter a soil’s composition of clay, silt, and sand, the farmer can affect aggregate stability, soil compaction, and available water capacity through practices like tillage, planting cover crops, and the use of heavy machinery.

A soil’s chemical components relate to the chemical makeup of the soil environment. These include the soil’s acidity (pH), salinity, and chemical nutrients. Farmers will easily recognize the “big three” soil nutrients: nitrogen (N), phosphorus (P), and potassium (K). These elements are so important to agricultural productivity that fertilizers are identified by their N–P–K mix. But a soil’s overall chemical health is more than just its nitrogen or phosphorus levels. The combination of pH, salinity, and nutrient levels helps determine what nutrients are actually available to plants and also affects the soil’s biological characteristics. Heavy metals are another component of a soil’s chemical makeup that can affect its agricultural suitability.

Historically, researchers have sought to explain a soil’s health with a single number: a soil health index. Using an index is attractive because it allows direct comparisons across different locations and over time. However, an index can greatly oversimplify reality. Two soils could share the same value on a soil health index, for example, but have very different underlying characteristics. One could have great physical properties and poor chemical properties, while the other could have good chemistry and bad water capacity. 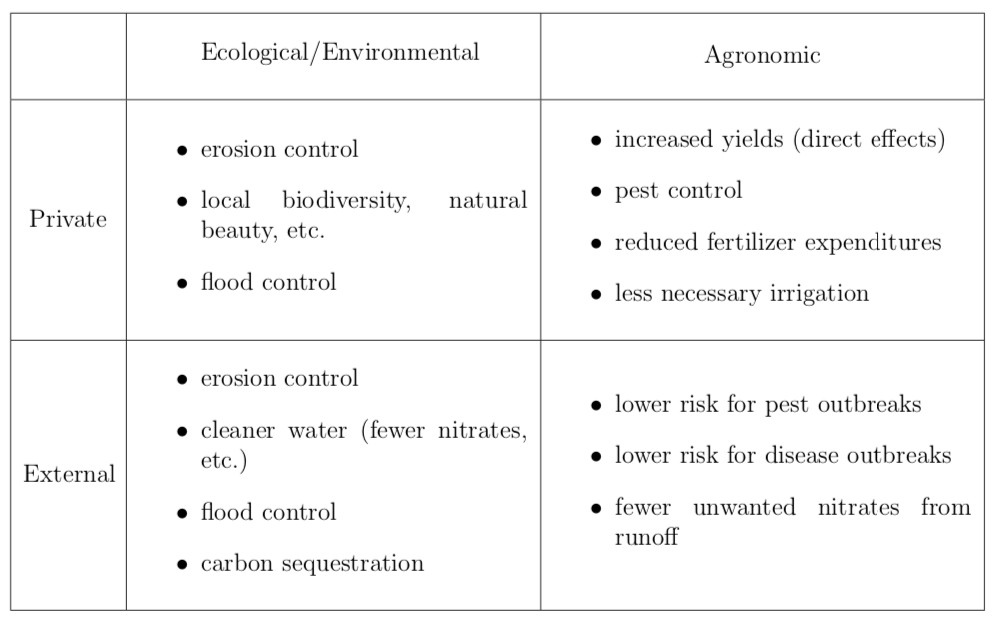 Farmers and ranchers care about soil health because healthy soils support high agricultural yields. But there are other benefits, too. For example, healthy soils can have positive spillover effects on other agricultural producers. Healthy soils also have a positive impact on their surrounding environment, irrespective of their agronomic effects. For example, to summarize all these different benefits, it is possible to think of soil health benefits along two dimensions: agronomic versus environmental and private versus public (Figure 2).

On the agronomic side, healthy soils increase yields, control pests, and reduce fertilizer and irrigation needs. They also lower the risk of pest and disease outbreaks on neighboring lands and cut down on nitrate runoff. On the environmental side, healthy soils prevent erosion, control flooding, increase biodiversity, clean water, and sequester carbon, among other things (Moebius-Clune et al., 2017).

Looking at Figure 2, it is clear that healthy soils provide some positive externalities—that is, they provide some benefits that aren’t directly enjoyed by the private producer. Externalities like carbon sequestration and flood control are neither excludable nor rival, making them public goods (Ostrom, 2015). However, it is not clear whether these positive externalities are large enough to justify expensive policies aimed at increasing soil health. The model presented below is flexible enough to include the external benefits of healthy soils and help answer this question.

A Dynamic Model of Soil Health

To combine the physical, chemical, and biological components of soil health with a model of human decision making, we need a dynamic framework. In other words, we need a model that explicitly accounts for how actions in one period affect outcomes in future periods, constrained by the natural processes governing how a soil’s health changes in response to different management practices. What we need is an optimal control model (Weitzman, 2003). Here, I describe the model in words and figures. For a more detailed exposition, see Stevens (2018). The main components of the model are as follows:

The model described above highlights some important insights for guiding soil health policy. Here, I discuss the model’s main implications for policy makers:

Soil health continues to be an important issue for producers and policy makers throughout the United States and the world. If current trends do not change, erosion and current production practices threaten to devastate soil health in coming years (Amundson et al., 2015). To meet this challenge, producers, policy makers, soil scientists, and economists must renew efforts to study and understand soil health in the context of our global agricultural system. Models of optimal control—like the one outlined here and in more detail in Stevens (2018)—provide a good baseline of how to think about soil health policy. Most immediately, policy makers would be wise to invest in subsidized soil testing and increased scientific research on how soil health evolves over time.

Burt, O.R. 1981. “Farm Level Economics of Soil Conservation in the Palouse Area of the Northwest.” American Journal of Agricultural Economics 63(1): 83–92.