Theme Overview: Addressing the Challenges of Entry into Farming

The latest Census of Agriculture reported that 22% of farms met the definition of a beginning farm—that is, those farms with a principal operator who has operated the same farm for less than 10 years.  The share of farms that are classified as beginning farms by this definition has been declining for at least the past three decades (figure 1).

Figure 1: The Number and
Share of Beginning
Principal Operators
Continues to Decline 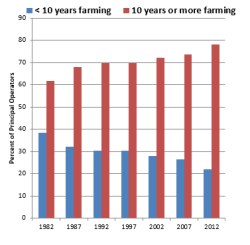 In 2012, the average age of principal farm operators was 58.3.  Nearly one-third were 65 years old or more and only 6% of principal farm operators were under 35 years old.  Policy makers often refer to the aging farmer population as an indicator that policies are needed to foster entry into farming, but many factors are affecting the farmer’s age distribution.  First, farmers are living longer as is the rest of the population, and the tax code encourages them to transfer their land to their heirs at the time of their death rather than sell it before their death and incur likely higher capital gains taxes. The farming lifestyle and investment opportunities are attractive to more senior farmers and their families, as well as younger farmers. Aside from the increasing number and share of older farmers, there has been an absolute decline in the number of young farmers.  Aspiring young farmers are now attending college at a rate equal to the general population, thereby delaying their planned entry into farming.  In 2011, 25% of all farmers had attained a four-year college degree compared to 28% for the general population—in 1964, only 4% of farmers and 8% of the general population had a college degree.  Furthermore, many young aspiring farmers choose to work in an off-farm job before entering farming to gain the experience or to save for the needed capital investments of farming, or most likely both.

Individuals enter farming, or aspire to enter farming, at all ages. In 2012, 37% of beginning principal operators were 55 years or older and only 19% were under 35.  Note that many beginning farmers are starting their businesses later in life, with potentially different financing and training needs than those of younger farmers.

While there is no objective measure of what is the "right" number of beginning farms, there is clearly a consensus that a diverse and innovative agricultural sector is an important policy goal for a variety of reasons, including national security. For this reason, a variety of public policies have addressed the challenges faced by beginning farmers in the hopes of stemming the loss of beginning farmers.  According to a variety of sources, including the Beginning Farmer Advisory Group to USDA and the National Young Farmer's Coalition, the major challenges of entering farming are access to farmland, capital, and farming expertise.

Beginning in 1980, Congress required the Farm Credit System to serve the credit needs of young and beginning farmers and small farms (12 U.S.C. Sec. 2207). The Farm Credit System, established by Congress in 1916, is a group of financial cooperatives that serve the agricultural and rural community in meeting their borrowing needs in local and regional markets.

In addition to the Farm Credit System, the USDA's Farm Service Agency (FSA) meets the credit needs of U.S. agriculture and is authorized—along with a variety of other programs targeted to beginning farmers—through the primary farm and food policy legislation, usually developed every five years:

There was some speculation that, since nonfarm jobs opportunities were declining during the Great Recession, young people would be attracted to agriculture by the relatively high returns. However, the record-breaking returns to the farm sector during the period of the recent recession have been followed by declines in real net farm income for the past three years.  The high returns experienced by the agricultural sector at the macro level has also meant that farmland prices, and correspondingly land rents, have increased.  So, the attraction for new entrants to the relative high returns in agriculture has been coupled with the increased barriers posed by higher land acquisition prices and rents. While net farm income commonly varies on an annual basis, land prices and rents are somewhat "sticky" downward.

Perhaps, the interest in urban agriculture will become a growth opportunity for beginning farmers in the future.  A bill was recently introduced in the U.S. Senate to support urban agriculture entitled the "Urban Agricultural Act of 2016." The bill has received widespread support from diverse groups including the major general farm groups—that is, the National Farmers Union and the American Farm Bureau Federation, as well as the Food Action Policy Network, and the National Young Farmers Coalition, among others. The bill proposes an important research component to better understand appropriate risk management tools, food safety, and environmental and economic factors affecting success of urban agriculture.

The four articles of this theme address the widely acknowledged barriers to entry faced by beginning farmers: adequate access to farming expertise by Auburn, et al., as well as two articles on access to land and capital—one by Bubela and another by Dodson and Ahrendsen.  In addition, the theme includes an article by Obudzinski who considers the possible direction of the next major farm legislation with regards to fostering the success of the future entrants into farming.

The Food, Conservation, and Energy Act of 2008, appropriated $75 million for FY 2009 to FY 2012 to develop and offer education, training, outreach and mentoring programs to enhance the sustainability of the next generation of farmers through the Beginning Farmer and Rancher Development Program (BFRDP). The Agriculture Act of 2014 provided an additional $20 million per year for 2014 through 2018.  Auburn, Ebodaghe, Rucker-Ross, and Dean, provide an analysis of the program in their article and show that, from 2009 to present, 256 awards have been made, totaling more than $126 million with at least one in every state.  The authors describe the types of BFRDP and, while it is always difficult to quantify the outcome of training programs, they also summarize indicators of tangible results. This includes helping people enter farming and ranching, and helping those who are in their first decade of farming or ranching be more profitable, better stewards of the land, or stronger contributors to their communities.

Heidi Bubela, a Senior Portfolio Analyst with the Farm Credit Services, discusses the importance of off-farm income to farm households in risk management, especially new entrants into agriculture. The Farm Credit System has a legislative mandate to meet the credit needs of both young and beginning farmers. Off-farm employment has long been recognized as a major source of income and a source of health insurance for the majority of farm households.  In addition, farm lenders are very cognizant of the value of off-farm income in managing the risks of farming, smoothing income, and servicing farm debt, especially for new entrants into farming, but continuing throughout the life-cycle.

Charles Dodson and Bruce Ahrendsen consider the role of USDA's Farm Service Agency (FSA) in meeting the needs of beginning farmers both through direct lending and by guaranteeing loans made by other lenders. FSA describes itself as the "lender of first opportunity," in part because of the assistance it provides beginning farmers, including through the new and popular "microloans." Moreover, with expectations for reduced sector income, FSA's role in serving the credit needs of those rejected by commercial lenders may increase at least in the short run. By jointly considering the FSA loan data base and the Agricultural Resource Management Survey, the authors are able to consider the loan portfolio of beginning farms by farm size and whether or not the farm was managed with multiple generations of family members.

Juli Obudzinski, a Senior Policy Specialist with the National Sustainable Agriculture Coalition, considers options for enhancing the policies and programs of past legislation to further address the needs of the beginning farmer population in the upcoming farm bill discussions. The Coalition is an active voice to policy makers in Washington, D.C. in representing over 100 grassroots organizations to advance the sustainability of agriculture, food systems, natural resources, and rural communities. Obudzinski supports enhancing the established BFRDP, the loan programs, the Transition Incentives Program to provide incentives to those with expiring CRP contracts to transfer land to conservation-minded new farmers, and crop insurance programs. She also forwards some interesting new ideas to consider.  For example, she suggests engaging Land Trusts and offering tax incentives to increase the access of new farmers to farmland.