Dealing with Water Scarcity: Need for Economy-Wide Considerations and Institutions 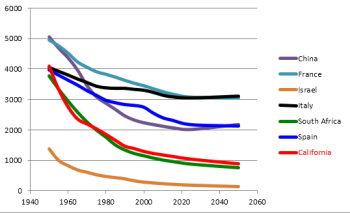 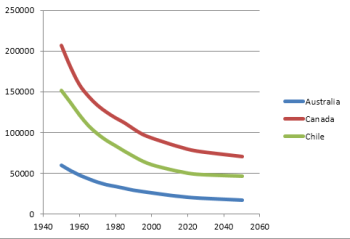 Much has been said on the state of water in the world. The starting point for the discussion about water scarcity is a simple arithmetic:  The amount of water in circulation is more or less fixed and the world population increases over time.  These two facts are by themselves sufficient to describe the inter-temporal and cross-sectional trends that explain changes in scarcity of water. Figure 1 demonstrates such trends in selected countries around the world.

A simple metric of water scarcity is the water availability per capita. We calculate it for both water-endowed and water-short countries. Under ideal conditions of water resource management and with no external shocks, such as climate change, both affecting the availability and variability, respectively, over time and across landscape, our world faces increased scarcity of water.  This scarcity under ‘ideal conditions’ is by itself devastating.  Different regions and countries lost 50-75% of the available water per capita in the past 100 years.  Add to that the loss due to mismanagement and external climate change shocks, and we face a catastrophic situation, especially in some parts of the world.

The substantial reduction in the available renewable water resources, on the one hand, and the increase in the water-consuming economic activities—for example for food production, increases in standards of living—on the other hand, lead to a widening gap between the water quantities supplied and demanded.  Usually, such a gap is bridged in the short run by increasing the overdraft of available water stocks—namely groundwater aquifers.  Indeed, 21 of the world’s 37 largest aquifers around the world extracted more water than was recharged during a recent 10-year study period ending in 2014 (Ritchey et al., 2015) (Figure 2).

Such a gap between supply and demand is the result not only of the reduction in the available quantity, but also a consequence of the deteriorated quality of water resources, making them inadequate for consumption.

According to the International Food Policy and Research Institute (IFPRI) and VEOLIA (2015) human activities contribute significant amounts of Biochemical Oxygen Demand (BOD), Nitrogen (N) and Phosphorus (P), which make their way into water bodies around the world and risk various water sources. By 2050, with a predicted drier climate scenario with medium levels of income and population growth projections it is expected that one in three people will be at risk of nitrogen pollution—an increase of 173% compared to 2015—and phosphorous pollution—an increase of 129%; and 1 in 5 people will be at risk of water pollution from BOD—an increase of 144%. 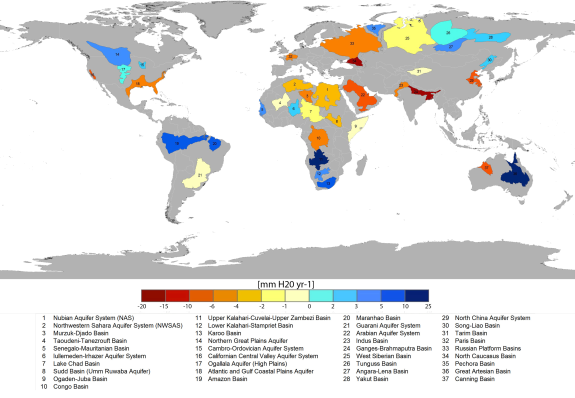 The above scenarios indicate a desperate need for effective policy interventions. Useful policies will address economy-wide considerations, consideration of all water types, and inclusion of support of public research in water resources and their management. Can the gap between the availability of water and the demand for water be closed? Is it indeed a catastrophic situation? We know that water is an essential input to many economic activities.  We also know that to manage water effectively we need well-performing technologies and institutions, and these are put into play by enabling policies.  Rather than the traditional delineation on sectoral supply-side policies and demand-side policies, given the central role of water in the economy, an effective policy intervention design has to be based on an economy-wide, rather than sectoral, basis.  Further, given the interactive role of water and other natural mediums in which it is applied and moves, a system-wide rather then a local dimension approach would be more effective.

Because water is so scarce, can we afford using only part of the water resources, or to put it differently, can we afford using water only once without recycling it? And finally, would a change in focus of water research be useful to address water scarcity and improved water use efficiency?

Because of its major role in the economy, water resources are the focus of many intervention policies that affect both demand- and supply-side regulations. Water policies are multi-objective in nature, aiming to achieve benefit equity, food security, and environmental and resource sustainability. With the lion’s share of consumption—70–90%—of annual renewable fresh water resources, agriculture is the focus of many policy efforts for improved performance of scarce water use. But, while focusing on policies that target irrigated agriculture may lead to an immediate improvement in irrigation water use, still, other implications may negatively affect other water-using sectors, and indirectly also the agricultural sector. This system of cause and effect holds also for the urban water sector, as well as for the industrial and environmental sectors (Dinar, 2014).

Therefore, water plays a central role as an inter-sectoral mechanism and has to be considered at the economy-wide level when being allocated among competing uses or regulated in one or more sectors. Water allocation has significant impacts on overall economic efficiency, particularly with growing physical scarcity in certain regions. Water also has become a strategic resource, involving conflicts among those who may be affected differently by various policies. As an example, recent economy-wide analysis in Mexico highlights the dilemma associated with policies aimed to reduce support to the irrigation sector—including water allocation, and subsidies for crops or inputs, such as electricity for pumping groundwater—which is seen as a major reason for aquifers depletion in the country.  The Mexico case is similar to many other cases in both developed and developing countries, facing similar dilemmas. On the one hand such policy interventions affect farmers’ behavior, but on the other hand they lead to negative impacts on lower strata population in the agricultural regions who lose their jobs.  In a similar way, removal of subsidies to certain crops and/or to certain inputs may have an indirect effect on the economy due to the blanket policy administered. A conclusion that is reached suggests that localized policies seem appropriate in addressing impacts of water availability that vary across regions, households, and producers (Yunez-Naude  and Rojas Castro, 2008).

Integrating the Waters and the Mediums for Water Impacts

Most of us think about water in terms of diversions from streams that are stored behind dams or in storages. However, both the sites for developing new water supplies, mainly reservoirs, and the opportunity cost of such water become very prohibitive.  Of the more or less available freshwater on earth, about 35 million cubic kilometers (km3), about one third is stored as groundwater. In addition, oceans contain 1,365 km3 of saltwater that could be available for consumption after a relatively costly desalination process (Shiklomanov, 1998; Clark and King, 2004).

Ten percent of the total available freshwater, or 3.5 million km3, is consumed by households. Of this amount, about 330 km3 are generated globally as municipal wastewater (Hernandez-Sancho et al., 2015). For example, of the 32 billion gallons—or 121 million cubic meters (m3)—of municipal wastewater discharged nationwide in the United States each day, approximately 45.5 million m3 are discharged to an ocean or estuary—an amount equivalent to 6% of total water use in the United States. Reusing this water would directly augment the nation’s total water supply (NAS, 2012).

Certain sources of water and certain types of soils that were taboo in the past are considered now appropriate for use in irrigated agriculture (Qadir et al., 2014; Assouline et al., 2015). Both treated wastewater and naturally occurring saline water can be used now for a wide range of soils and crops, mainly due to recent development in management practices and crop genetic developments, and with little harm to environment if properly implemented.

Another non-conventional source of water is desalination of seawater. The practically infinite amount of seawater and the fact that many major urban centers are located next to the coast, coupled with the recently-developed desalinization technologies, make desalinated seawater a feasible next available technology to produce necessary water supplies in many locations. Table 1 describes the various sources of water and the receiving sectors.

Fortunately, researchers have produced technological innovations which allow for more efficient use of water.  This is true for conservation, use of marginal water and creation of new water—for example, recycled wastewater and desalinated water. However, are technological innovations the limiting factor facing our water scarcity now? Do we need more technologies, or rather more effective institutions to manage water resources?

For example, the 2017 Obama’s Water Innovation Budget (Environmental Leader, 2016) is expected to fund research and development in water conservation and new water supply technologies (Table 2). Scrutiny of the items in the table suggests that of the nearly $260 million budgeted, all goes to technologies and none to improved institutions and new water management arrangements to enable these technologies.

While technical solutions to the water crisis are important, these are not the limiting factors in reaching sustainable water use. Given the present situation of extreme scarcity, one has to realize the fact that about 30% of the available water resources, such as groundwater, are common pool resources that require the development of joint management practices; and that cross-sectional differences in water scarcity could be overcome if trade in water takes place.  The potential for cooperative arrangements among users (CFBF, 2015), new and improved water institutions, and self-enforced regulations by user groups (Harter, 2015) have been recognized already by water users and state and Federal agencies, but there is still not sufficient support realized via funding of studies and research on non-structural interventions and institutions for water regulation.

The water situation in our world is dire and worsens over time due to natural trends in population growth and human impacts.  The serious trends in water availability and level of production in many parts of the world can be halted, or even stopped, if we manage to introduce several paradigm shift in policies we employ in water and other water-related issues:

Hernandez-Sancho, F., B. Lamizana-Diallo, J. Mateo-Sagasta, and M. Qadeer. 2015.  “Economic Valuation of Wastewater –The Cost of Action and the Cost of No Action.”  Nairobi: United Nations Environment Programme.

Shiklomanov, I. A. 1998. World Water Resources: An Appraisal for the 21st Centura. IHP Report. Paris: UNESCO.