The year 2011 set two unwelcome records in Texas: the driest one year drought and the hottest year, as measured by 24 hour average temperature. The lack of rainfall eclipsed earlier marks set for dryness in 1956, the peak of the 1950s drought, long regarded as a watershed drought event in Texas, and 1918. The lack of rain was exacerbated by the extreme heat. Texas set a record for the contiguous United States for the hottest average 24 hour temperature.

This article examines the estimated direct financial impact of the Texas drought on agriculture, some challenges in estimating these impacts, and a few lessons learned from the impacts of a number of droughts.

The 2011 direct financial losses for Texas crop and livestock agriculture are estimated to total $7.62 billion. That is more than $3.5 billion larger than the loss estimated for the 2006 drought, which was the previous costliest drought. The losses represented about 43% of the average value of Texas agricultural receipts over the last four years. Texas produces, on average, about $16 billion in cash receipts annually, which equals close to 6% of the nation’s agricultural cash receipts. Drought losses are summarized in Figure 1 for some major agricultural products and discussed below by crop and livestock category. 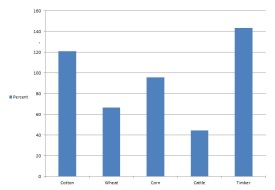 In August 2011, the USDA projected a relatively low average cotton yield of 636 pounds per harvested acre, which they subsequently revised down to 557 pounds per acre by December. In Texas, cotton growers abandoned a historically high number of acres, equivalent to 55 percent of planted acres. Compared to five year average yields and abandonment, 2011 represented a huge loss in potential production. Applied to USDA’s measure of 7.1 million planted cotton acres in Texas, and valued at USDA’s projected price of 91 cents per pound, this loss added up to $2.2 billion. It is noteworthy that $1.8 billion is the ten year average total value of cotton lint and cottonseed production in Texas. Therefore, Texas cotton growers lost more market income in 2011 than they would normally make for an entire cotton crop.

The drought of 2011 lowered grain production in Texas to about half of normal levels and is estimated to have cost wheat, corn, and sorghum grain farmers in Texas over $1.4 billion. Revised USDA acreage and yield estimates continually reduced the size of the crop as the season progressed.

As the drought progressed in severity through the year, corn acres and yield projections were revised lower. Texas corn production was an estimated 136.7 million bushels compared to a five-year average of 255.4 million, down 46%. Harvested acres were 23% lower than usual due to higher abandonment rates and yields were down 30% statewide. The combination of yield losses and reduction in harvested acres put the value of lost Texas corn for grain at $736 million.

Texas grain sorghum production was estimated at 56.4 million bushels compared to a five-year average of 119.5 million, down 60%. The 1.6 million acres planted in the Spring of 2011 was the fewest in Texas’ history. Then the drought further lowered yields and raised abandonment rates. The combination of yield losses and reduction in harvested acres put Texas grain sorghum losses at $385 million.

The value of hay production lost due to the drought was estimated to be $750 million. The lack of rain throughout the year led to the lack of hay to harvest. Corn stalks, grain sorghum, and wheat stubble from either failed grain crops or post-harvest residue is often baled during drought years, and was commonly done in 2011. The quality of these feeds is often very low and its value is commensurate with its quality. Although, in years like 2011, even the lowest quality feeds are used along with other supplemental feeds.

The historic drought took a severe toll on trees across the state. The commercial timber forested area of East Texas was among the hardest hit. An estimated $558 million of standing merchantable trees (diameter of 5 inches or larger) on forestland in East Texas have succumbed to the drought. The loss is roughly twice the stumpage value of annual timber harvest in Texas over the past three years. The drought also had a devastating impact on seedlings and saplings, which are normally more susceptible to severe drought of this scale. Economic loss to these premerchantable timber stands was estimated to be an additional $111 million. Taking the impacts to merchantable and premerchantable trees into account, the direct economic loss of East Texas Forest from the recent drought was estimated to be around $669 million measured in stumpage values (sale value of standing trees).

A number of questions always arise when doing these estimates of economic loss including:

For the 2011 drought, a start date of the Fall of 2010 was used due to the drought stunted winter wheat crop that struggled to become established and to develop. The estimated drought losses, then, included wheat yield losses, but also the lost value of grazing stocker cattle on wheat pasture over the winter.

Being a large state, with many crops, the discussion involves what crops and livestock to include. Because financial estimates of droughts had been made in the past, estimated costs for the current drought were made including the same crops and livestock. In doing so, the estimates did not include losses to crops such as fruits and vegetables, peanuts, horticultural and nursery crops—all important crops in Texas. Urban forestry or urban losses were also not included.  However, for the first time timber and forestry losses were included as a side report. The crops and livestock included represent about two-thirds of the agricultural cash receipts generated by Texas agriculture.

The size of Texas can result in more regionally located droughts. The drought of 2006 hit South Texas much harder than other parts of the state. But, the 2011 drought impact occurred state-wide.

Baselines for comparison must be defined. In many cases, average yields and prices over a number of years are used to provide a comparison base. Using multiple years allows avoidance of individual year’s extraordinary events that can skew the results one way or another.

Care must be taken in estimating drought impacts in order to avoid double counting losses. It can be easy to count both the value of lost grazing and the effect of lost hay production, for example. Care must also be taken to clearly articulate what is included in estimates and what is not.

It is possible that one farmer’s loss is another’s gain. This is illustrated by the 2012 year drought affected commodity prices. Those with grain in storage benefit from the high prices while those whose crop has been destroyed by a drought might experience financial loss.

Even one-year droughts have multiyear impacts. It is common for the effects of drought in one year to result in lower conception rates and fewer calves born the next year. It can take years for pasture and range grasses to recover from drought resulting in continued reduced stocking rates for several years. Even through the severity of the 2011 drought, rice farmers receiving water from the Lower Colorado River Authority, which controls water on the Colorado River (the Texas Colorado River), were able to continue to irrigate. But, the lack of rainfall lowered water levels in the reservoirs resulting in no water allocated for crop irrigation in 2012.  The financial impacts of surviving a drought can persist for years on a ranch or farm’s cash flow and balance sheet.

Analyses of droughts also require assessments of “downstream impacts.” Assessments of losses at the farm gate, or direct economic impacts, can miss significant financial impacts. Examples include effects on the cotton gins that had no cotton to gin, truckers that did not have grain or bales to haul, and compresses, oil mills, and exporters that had reduced business.

Some Lessons Learned Over the Years

Texas is a big state and experiences extreme weather events that necessitate understanding drought’s impact on agriculture. Although this article was written before the 2012 crop year, the 2012 drought would provide a similar set of lessons. Given that 2011 was not a “first rodeo,” a few important lessons have been gleaned over the years. A brief list of lessons learned includes:

Nielson-Gammon, J.W. (2011). The 2011 Texas Drought. A Briefing Packet for the Texas Legislature. The Office of the State Climatologist, Texas A&M University. October 31.