Theme Overview: What Happens When the Well Goes Dry? And Other Agricultural Disasters

According to the U.S. Drought Monitor (Figure 1), as of August 14, 2012, 62% of the contiguous United States was experiencing some form of drought, more than one third of which was classified as extreme or exceptional. Most of the extreme or exceptional drought is located in America’s breadbasket: Oklahoma, Kansas, Nebraska, Iowa, Missouri, Arkansas, Illinois, Kentucky and Indiana. Georgia is also experiencing vast areas of exceptional drought. These conditions directly affect agriculture with the combination of above average temperatures and below average precipitation making it difficult to cultivate and sustain crops and graze livestock. The short-run results are crop failure for farmers and increased feed costs and reduced weight gain for ranchers.

Drought-induced shortages of corn will likely drive up food costs in the not so distant future. Additional longer-term impacts from the drought include:

Add to these the compounding effects from multiyear drought conditions, as in Oklahoma, Arkansas and Texas, and the impacts are likely to be more severe. 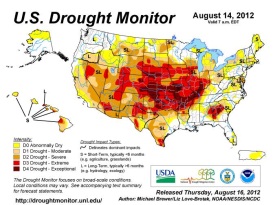 Given these geographically far-reaching and enduring impacts, it is critical that policymakers, business owners, farmers and ranchers, and others understand the nature and magnitude of the drought impacts and know how to respond to them. These four articles provide such background and guidance. Two of the articles showcase the breadth of damage the 2011 drought had on Arkansas and Texas. The third article describes one response system used in Louisiana to assess the damage caused by natural disasters like drought. The final article presents mitigation strategies for addressing drought and longer-term water availability issues.

Watkins shares with us the experience of Arkansas agriculture’s struggle during last year’s drought. In addition to outlining the immediate impacts to crops and livestock, Watkins describes the longer-term impacts associated with drought, such as the reforestation costs incurred due to lost saplings, increased disease vulnerability, and wildfire. Anderson, Welch and Robinson provide quantitative estimates for Texas of many of the impacts Watkins describes; in their article, they describe how the $7.62 billion estimate of drought-related damages to Texas agriculture are calculated.

A common issue in generating drought, or more broadly disaster, estimates is gathering the data. Guidry and Pruitt present a system developed by the Louisiana State University Agricultural Center (LSU AgCenter). The LSU AgCenter method involves surveying personnel at the parish (county) level immediately following the disaster to establish an initial estimate, and then following up with the same staff using a more detailed survey several months later to generate a second estimate. This procedure enables quick estimation of disaster impacts, while ensuring data integrity, and the system serves as a model for other states.

This issue concludes with an overview of water-related mitigation and adaptation strategies presented by Schwabe and Connor. Since drought is beyond the control of decision makers, the logical question is: what can be done to mitigate or adapt to drought conditions? Schwabe and Connor discuss strategies that have been adopted throughout the world to address water scarcity issues in semi-arid and arid regions, such as Australia and California. Though the strategies discussed in this article are long-term solutions, the increasing probability of drought conditions across the U.S. due to increasing climate variability should cause decision makers to think beyond the immediate crisis.