Emerging Markets for U.S. Meat and Poultry In China

Rising Demand for Meat in China

As the most populous country, China is also the world's largest food consumer. Rising incomes in China are leading to a shift in the consumption of higher quality food products. This trend is represented by an increase in the consumption of animal protein, mostly meat, poultry, dairy, and aquaculture products. Meat consumption in China grew rapidly in the past three decades and has become the most important category of food consumption in recent years. Data from the Food and Agriculture Organization of the United Nations (FAO), presented in Figure 1, reveals how the typical Chinese dinner plate has changed in the past half a century. In the 1960s, cereals, pulses, and starchy roots provided 84% of total calories for Chinese people, while meat, including poultry and offal, contributed only 4%. As a result of economic development in the last 34 years, when annual GDP grew from $309 Billion in 1980 to $10,355 Billion in 2014 (IMF, 2014), meat, poultry, fish, eggs, and dairy products became a key source of calories and provided 19% of total calories in the 2000s. Among all kinds of meat, pork is the most favored animal protein; its consumption increased by more than 8% annually during this period. Data from the U.S. Department of Agriculture (USDA) shows that annual pork consumption increased from 16 million metric tons in 1985 to 52 million metric tons in 2012, and annual consumption of all chicken, beef, and pork combined increased from 17 to 71 million metric tons. This rising trend in meat consumption is highlighted in Figure 2.

Figure 1: The Evolution of The Chinese Dinner Plate: Food Consumption by Category
(KCal/Day/Capita).

Source: Food and Agriculture Organization of the United Nations. 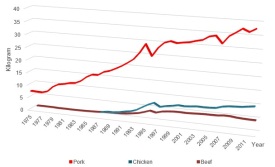 While China has imported a significant amount of feedstuff to fuel its animal protein production, several constraints prevent Chinese producers from supplying necessary quantity and demanded quality. Limited agricultural space, urban sprawl, and industrialization have made it difficult to prevent the spread of animal diseases, and have lead to food safety problems in domestic animal production. These spatial constraints tend to either raise the cost of food products or compromise their safety and quality, and will likely remain in the presence of government regulations and as livestock industries modernize.

Large swine and poultry operations are densely concentrated around China’s urban areas on the east coast of the country (Gerber et al., 2005), where there is also an extremely high density of human population.  This provides an environment for animal diseases to spread, and can even result in situations where viruses are passed from animals to human, such as avian and swine influenza (H5N1 and H1N1, respectively). These operations also generate tremendous waste and dead animals, which unless properly handled can pollute surface and ground water.  The presence of nitrogen and phosphorus in the water causes an over growth of bacteria, phytoplankton, zooplankton, and other pathogens which in turn affect aquaculture, water fowl, poultry, and swine production. As a result, antibiotics have been liberally administered in livestock operations, and there are serious concerns about the effects of antibiotic residuals in meat and other animal protein products for human consumption (Qi et al., 2009).

With the appetite for meat rising, Chinese consumers are no longer solely focusing on domestic products. China has been a net pork importer since 2008, with net imports of swine meat increasing to 535 thousand metric tons in 2014 (USDA). Information about China’s main pork suppliers can be found in Table 1. As the largest pork exporter to China, U.S. pork suppliers increased the value of their sales in China from $439 million in 2008 to over $1 billion in 2012. This number is expected to increase over the next few years as a result of higher feed prices in China, natural constraints to production, domestic food safety events, and changing consumer preferences and lifestyles.

Because of constantly occurring food safety events, such as the melamine adulterated milk scandal that occurred in 2008, urban Chinese consumers are becoming increasingly concerned about the safety and quality of their food. Their revealed demand for food safety is evidenced by the flourishing of high end food retail stores carrying imported food and drink products from the United States, European Union, Australia and other developed countries. The high transportation cost for items such as meat and fluid milk are reflected in the high price for these products. While a growing minority of affluent consumers mostly patronizes these high-end supermarkets, imported products are making their way into supermarkets frequented by the average urban consumer. Moreover, the supermarket revolution in China is driving changes in shopping behavior as consumers have experienced an accelerated change towards the procurement of food from modern retail channels, where branding and labeling allow consumers to differentiate the quality image of products (Hu et al., 2004). In the last two years, Internet food sales in China have grown rapidly surpassing $300 billion in 2013 with the largest online retailer, Taobao Marketplace, surpassing U.S. sales from Amazon.com, Inc. and eBay Inc. combined. As a result, online food sales for premium grocery products in China have also boomed, cashing in on food safety scares affecting traditional outlets (Patton, 2013). Same-day delivery of imported meat, poultry and dairy products have started to make an appearance in large cities in China.

In the wake of these Chinese food system transformations, various consumer preference studies have looked at consumer valuation of credence attributes, especially food safety (Wang, Mao, and Gale, 2008; Zhang, Bai, and Wahl, 2012; Bai, Zhang, and Jiang, 2013). Empirical results across studies of pork, beef, poultry, and fluid milk shows that urban consumers are willing to pay a price premium for products with greater food safety credibility, including reliance on certified brands, traceability, antibiotic-free products, and other indicators of premium quality. A series of recent studies have found evidence of effective urban consumer demand for products that can display government food safety certification, third party certification, and product traceability in domestic pork and milk (Ortega et al., 2011; Ortega et al., 2012).  While consumers are willing to pay more for government certification of food safety in domestic products as compared to products without certification, there is evidence of emerging consumer preferences for imported food products. This is a result of persistent domestic food safety concerns, rising incomes and changing consumer lifestyles.

On the other hand, Chinese consumers seem to prefer domestic food to imports for less commonly consumed specialty products such as duck; this is mostly a result of local tastes and preferences. Our study conducted in 2013 on duck dishes consumed in restaurants in four major cities reveals that consumers perceive domestic duck meat to have superior flavor than imported duck—when controlling for other quality and safety attributes. Preliminary results from another study conducted in late 2013 indicate that while consumers in Beijing have a strong preference for domestic beef products, they perceive U.S. beef (not legally available in China) to be a safer alternative. Similar results were found in a series of consumer interviews conducted in the summer of 2014 regarding demand for U.S. pork. The strong preference for domestic products is due to perceived taste differences and cultural factors. However, U.S. meat products in China currently enjoy a reputation of being safe and of high quality.

While Chinese concerns over food safety present an opportunity for U.S. products, it also poses a threat for foreign products, especially in the wake of the new Chinese Food Safety Law. Imported products are facing higher barriers to trade due to tightening food safety standards, which are easier to enforce for imported products than for the domestic market. As a result, U.S. meat exports to China have been at the center of controversial trade restrictions and political disputes in recent years. China has banned the importation of U.S. pork that is raised with the use of ractopamine—a feed additive that promotes lean meat production and is readily used in the U.S. swine sector.  It is worth noting that despite this trade restriction, U.S. pork is known to have made its way to the Chinese mainland through a “grey channel” originating in Hong Kong where there are minimal trade barriers for imports (Gale, Marti, and Hu, 2012). China also remains the only major market that has not officially reopened to American beef after the first case of U.S. Bovine Spongiform Encephalopathy (BSE) in 2003.

Despite these setbacks and challenges, there is renewed optimism over the future of American meat exports in China. In 2014, Smithfield Foods Inc., the U.S.’s largest pork producer was acquired by China’s WH Group (formerly known as Shuanghui International)—the biggest Chinese purchase of a U.S. company to date. Over most of the past decade, Smithfield has been the major U.S. pork exporter to China though these shipments have been largely unnoticed by consumers, as they have been comprised of frozen pork that ends up in meat processing and food service channels. This recent merger provides opportunities for U.S. pork to enter China’s profitable chilled/processed pork market that is mainly sold in supermarket stores (Xia, 2014).

In the beef sector, recent talks between trade officials point to an official restoration of the United States-China beef trade in the near future. China is the world’s fastest-growing beef market and a significant buyer of imported beef by volume, mostly sourcing from Australia, New Zealand, Canada, Uruguay, and Argentina. Booming domestic demand, coupled with tight domestic supply and favorable U.S. pricing is putting increased pressure on the Chinese to open up the market for U.S. beef. While not as popular as pork, the United States needs to maintain and expand its promotional strategy surrounding beef in China to increase consumer awareness and capture maximum market share once official trade is reestablished.

Starting from 2010, China levied a substantial anti-dumping duty on U.S. chicken—which has ranged from 46% to 105%. In addition, a 2015 ban on poultry from the U.S. to China due to high pathogenic avian influenza (HPAI) detections is currently dampening poultry exports, pointing to the continued existence of business risk on the export of meat products. Nevertheless, the United States has been a significant source of broiler imports in the Chinese market and is expected to recover its market share once official trade is reestablished.

To penetrate and expand into the Chinese market for meat, poultry, and other animal protein, U.S. industries need to recognize Chinese consumers’ food culture and preferences with regards to taste, texture, cuts, and emphasize the established safety and quality reputation of U.S. products.  Furthermore, as excess demand for animal protein continues to increase under natural and spatial domestic production constraints, the U.S. meat industry is well positioned to capitalize on the growing potential of the Chinese market.