New Insights on the Impacts of Public Agricultural Research and Extension

In order to feed the growing population of the world, expected to reach 9.6 billion people by 2050—a 29% increase over 2013—without causing immense environmental damage and human hunger, society must increase agricultural productivity. Two ways of achieving this are to invest in public agricultural research and to invest in public extension delivery. The importance of the need for increased investment is widely recognized.  For example, in February of 2016, after only a month as the newly elected President of the American Farm Bureau Federation, Zippy Duval supported President Obama's proposed 2017 budget increases for agricultural research (AFBF, 2016) and highlighted the need for increased investment in agricultural research in his April 18, 2016, Congressional testimony (Duvall, 2016). In addition, the importance of investing in agricultural research worldwide is explicitly cited as a target of Goal 2 in the recently released United Nations Sustainability Development Goals (United Nations, 2015).

Developed countries like the United States have been leaders in science-based agricultural productivity increases for most of the 20st century. However, after growing rapidly from 1960-1982, growth in public, productivity-oriented, agricultural research investment in the United States slowed considerably from 1980-1995, and then declined over 1995-1998 by 20% before turning around and showing some growth to 2006, before declining again during the Great Recession. In contrast, rapidly developing countries, such as Brazil and China, are investing heavily in agricultural research, putting future international competitiveness of U.S. agricultural exports at risk (Fuglie and Wang, 2012). Furthermore, consumers worldwide will be worse-off if future investments in public and private agricultural research and extension are not large enough to deliver declining real world food prices in the 21st century.

Although SAESs were established to conduct original research on agriculture, the breadth of the research undertaken has increased over time to include research to improve the rural home and rural life, on agricultural marketing and resource conservation, on forestry and wildlife habitat, and on rural development. Hence, the breadth of the research agenda of scientists of the SAESs has expanded over time, and by the 1970s, research that was undertaken by SAES scientists was actually much broader than what could reasonably be expected to impact agricultural productivity. In addition, the breadth of research undertaken by the USDA has expanded. For example, in 1940-1941, the USDA established four Regional Utilization Laboratories or Centers—Western in Albany, CA; Midwest in Peoria, IL; Southeastern in New Orleans, LA; and Northeastern in Wyndmoor, PA—to undertake research to develop new uses and new and extended markets and outlets for farm commodities and products. Initially, they were independent agencies, but in 1953, the USDA placed these labs under the administration of the Agricultural Research Service (USDA, 2016).  In 1972, new federal funding for research on rural development was made available to the State Agricultural Experiment Stations. Hence, the breadth of “agricultural” research undertaken by the public federal agricultural research system has expanded over the past century.

In developing measures of returns to investments in public agricultural research and extension delivery, economists address a variety of issues about data and methods. Four critical issues include: separation of those research and extension investments that contribute to agricultural productivity growth from those that do not; accounting for the benefits of investment in one location or farm practice that spill-over to others; identifying the lag effects of an annual investment in research and extension over multiple years; and employing the most appropriate metric for calculating returns to investments. In addition, it is important to think carefully about and identify defensible measures of benefits and costs. In particular, scholars should guard against creating measures of costs and benefits that contain obvious measurement errors.

The federal, state, and county governments fund public agricultural extension, officially labeled Cooperative Extension. It is primarily adult education for immediate decision making of farmers, households, and communities and youth activities (Wang, 2014). Broadly, the goal has been to provide information for better farm, agribusiness and home decision-making. The youth activities are comprised of “boys” and “girls” clubs, called “4-H” clubs, where members undertake practical projects in agriculture, home economics, and related subjects. In the 1960s, extension added programs in community development and natural resources. Although a gross measure of cooperative extension is possible, it seems most likely that only agriculture and natural resource extension contribute significantly to state agricultural productivity. This requires netting out resources allocated to other types of extension activities, such as home economics, community development, and 4-H. How much of a difference is there between the net and gross measures of cooperative extension? Over 1977-1992, only 55% of the gross measure of extension was accounted for by agricultural and natural resource extension. In addition, in 1977, 30% of the gross extension was allocated to 4-H, but this share declined to 23% in 1992 and seemingly leveled off.

Since extension is largely information for current decision making, 50% of its impacts—or timing weight—occurs within the year undertaken and then the impact and weights decline to zero with obsolescence. (Huffman and Evenson 2006).

Public agricultural research undertaken in one state produces discoveries that also spill over or are an input into public and private agricultural research efforts in other states and to technologies available to farms and agri-businesses in other areas, producing one type of public good. They can be represented by similarity of agro-ecological zones, output-mix similarities, or geographical proximity. When areas are physically close to one another, it reduces the physical distance that discoveries and information must travel before they can be used by farmers and agribusiness in another area. This reduces one dimension of the costs of information transfers. For example, discoveries made by public agricultural research in Iowa on corn production can easily travel to farmers and agribusinesses in Illinois and southern Minnesota but are less useful in Mississippi and North Carolina. See Huffman and Evenson (2006). Spillover benefits of research undertaken in one state to other states complicates the decision making on funding of public agricultural research in any one state. For example, the spillover benefits might be overlooked. Generally, it is assumed that there are no significant interstate spillovers for public agricultural extension.

For social cost-benefit analysis where comparison might be made across government funded programs and even internationally, the real—inflation-adjusted—social internal rates of return are better summary statistics than the net present values or cost-benefit ratios estimates. This is because in computing the net present value and the cost-benefit ratio, one must have an estimate of the social opportunity costs of funds—interest or discount rate—in each year of the investment project, and there is no reason to believe that these interest rates are the same in each year of the project (Harberger 1972). In benefit-cost analysis, the size of the ratio is very much affected by the choice of the discount rate used to compute these values.

In developing countries where rates of inflation may be high and variable, it becomes difficult to derive defensible measures of real discount rates. In particular, Evenson (2001) discusses common problems in interpreting benefit-cost ratios for public agricultural research. 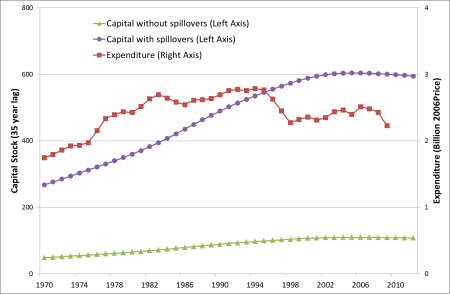 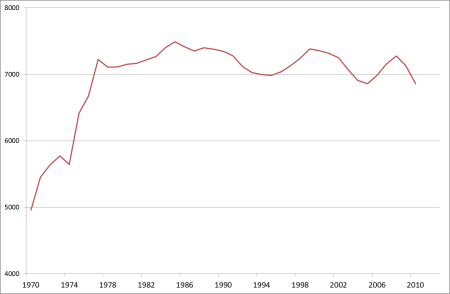 To gain additional perspective on productivity-generating investments in public agricultural research and extension, it is useful to consider four large agricultural states that are in different regions of the country and that differ in products produced: California, Iowa, North Carolina, and Texas.  In these states, productivity-oriented public agricultural-research expenditures peaked over the late 1980s and the early to mid-90s (Figure 3a).  The peak came earlier in North Carolina (1988), with a later secondary peak in 2005. The peak in California came in 1992, with a later secondary peak in 2005, and the peaks in Texas and Iowa were at the same time as for U.S. total public agricultural research expenditures—1994-1995. 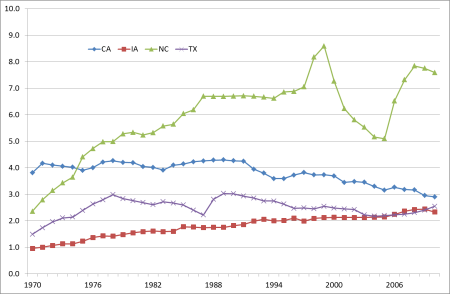 Rate of Return to Investments in Research and Extension

Compared to recent studies that have used gross measures of public agricultural research and extension, the estimates of the returns for this study are higher. This is not surprising given that gross measures induce serious measurement errors, which tend to bias estimated benefits downward.

Wallace E. Huffman (whuffman@iastate.edu) is C.F. Curtiss Distinguished Professor of Agriculture and Life Sciences, Department of Economics, Iowa State University, Ames, IA. Project funded by the Iowa Agricultural Experiment Station. Thanks to a reviewer and the Editor for suggestions on an earlier draft.