Railroads are important for transporting agricultural commodities from producing regions to domestic processing locations and export ports. These shipments involve large scale movements of low value, bulk commodities over long distances and thus rail service is virtually the only cost effective shipping alternative available.  U.S. Department of Agriculture (USDA), Agricultural Marketing Service (2015) reports that railroads transported 83% of Montana and 80% of North Dakota grain and oilseeds during the crop marketing years from 2009 to 2012. Though not as critical as for Montana and North Dakota, rail transportation is significant for many other states producing grain and oilseeds. The corresponding percentages for South Dakota, Minnesota, Kansas, Oklahoma, Idaho, and Washington were 39%, 35%, 34%, 46%, 30%, and 31%, respectively. 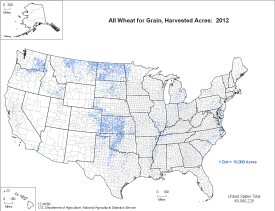 Wheat production in the United States is generally concentrated in some of the most sparsely populated areas of the country (Figure 1).  The reliance of wheat shippers on rail transport is higher than the percentages for all grain and soybeans. For example, Montana ships nearly 100% of its wheat by rail.

According to USDA research, 9 of the top 10 wheat producing states are more than 150 miles from barge transportation on the Mississippi and Columbia Rivers which provides the most significant competition to railroads for long distance movements of wheat to export ports (Harbor, 2000). The average distances to barge loading locations for the nine largest wheat producing states are 206.2 miles for Idaho, 219.9 miles for Kansas, 128.8 miles for Minnesota, 364.6 miles for Montana, 381.9 miles for North Dakota, 186.4 miles for Oklahoma, 214.8 miles for South Dakota, 276.7 miles for Texas, and 57.4 miles for Washington.

Wheat shippers in the central and northern plains states simply have no cost effective transportation alternative to railroads. Wheat produced in these areas move long distances to domestic processing and consumption locations or to export ports. Wheat shippers in these areas do not have direct access to barge loading locations and truck transport provide no competition for these movements. In contrast, transport of grain produced in more eastern regions has little reliance on rail transportation.  For example, the significance of barge competition for rail transport of grain is indicated by the percent of grain shipped by rail for states bordering the Mississippi River: 14%, 16%, 32%, and 6% for Iowa, Missouri, Illinois, and Arkansas, respectively (USDA, 2015).

The Rail System and Competition

The Class I railroad system of today was formed to take advantage of the long haul cost advantages of railroads relative to other types of transport.  The Class I system of today was formed by railroad mergers occurring since 1980.  For example, there were 40 railroads designated as Class I in 1980 but today there are only seven. The Regional (Class II) and Local (Class III) railroads are bridge carriers for the Class I railroads. However, depending on the railroad network, Class II and III railroads may contribute to competition among Class I railroads. For example, in North Dakota, the Dakota, Missouri Valley and Western (DMVW) is an affiliate of the Canadian Pacific (CP) but it serves areas of the state that the BNSF Railway does also, but not the CP. Thus DMVW competes with BNSF for these wheat shipments. Also, in North Dakota, the Red River Valley, and Western is an affiliate of BNSF but serves many areas of the state where there is a strong CP presence. Thus RRVW competes with CP for these shipments. Thus the Class II and III railroads compete on behalf of their affiliate Class I railroad.

The Staggers Act of 1980 contained provisions that make railroad abandonment easier. As a result many miles of branch line serving rural areas were abandoned. However, the Class I railroads also sold branch lines to short-line (Class II and III) railroads. As a result the number of short-lines boomed in the 1980s and the 1990s. Between 1980 and 1999, 332 short-lines were created, operating 41,448 miles of track. Some of these short-lines are still “stand-alone” companies, but many have been absorbed by large firms that own and operate several short-lines under a common ownership.

Short-lines have several advantages that have enabled them to successfully serve rural areas. These advantages include lower labor costs than Class I railroads and the ability to more likely be able to operate low traffic density lines profitably. Since they have a relatively small number of shippers, short-lines are able to provide superior shipper service. Also short-lines reduce the number of truck shipments resulting in less highway maintenance and rehabilitation costs in rural areas.

The Class I railroads serving wheat areas are the Union Pacific (UP) and the Burlington Northern Santa Fe (BNSF). Table 1 displays the railroad network in the nine major wheat producing states.

As the data in Table 1 indicate, Class I railroads dominate the rail networks of these states, accounting for 58% to 87% of the rail mileage, but in six of the nine states, Class II and III railroads account for 35% to 42% of the railroad network.

For revenue/variable cost ratios (R/VC) the states with the largest increases were Kansas, Missouri, Colorado, and Nebraska. Montana’s ratio remained virtually unchanged. North Dakota and Indiana had the lowest increases in R/VC ratios for the 1988-2007 period.  USDA reported that Montana had the 7th lowest and North Dakota the 8th lowest average grain and oilseed rates per ton-mile in the 2006-2010 period for 36 states.

A recent 2014 study by Babcock, McKamey, and Gayle addressed the issues of railroad competition and its effect on railroad prices for North Dakota, Montana, and Kansas wheat using rigorous statistical techniques.  Since Kansas has two Class I railroads of approximately equal size while North Dakota has one, the authors were able to examine if  competition among rail lines is stronger in Kansas, leading to lower Kansas rail wheat prices than North Dakota and Montana rail wheat prices.  The authors found for North Dakota—but not Montana— that the railroad average wheat rate per ton-mile were higher than the average Kansas wheat rates due to greater rail competition in Kansas.

Since the price received by producers is approximately the destination price minus the price at the origin, if railroads raise their prices, the price received by producers is correspondingly reduced. The lower prices have a direct effect on farm income, reducing crop receipts. An USDA study of the rail service disruption that occurred in the Upper Midwest in 2014 concluded that transportation cost increases for corn, wheat, and soybeans from the Upper Midwest to the Pacific Northwest ports and the Gulf of Mexico ports could have depressed local crop prices on average by between $0.11 per bushel to as much as $0.18 per bushel in 2014 (USDA-AMS, 2015).