With billions of federal grant dollars potentially at stake, every community has a vested interest in ensuring that its residents are accurately counted in the U.S. Decennial Census of Population and Housing. In the 2010 Census, 20.7% of eligible households failed to return their census forms, implying a response rate of only 79.3%. That amounts to about 22 million households not reached in the last census, the number of which not only affects the quality of the census but also may lead businesses and government officials to make inaccurate decisions when targeting specific populations.

The goal for the 2020 survey is to raise this response rate significantly through outreach and by using on-line survey forms, which rely heavily on broadband Internet access. Researchers have identified key sociodemographic factors associated with low participation in the census. However, differences in how these factors affect responses across metropolitan and non-metropolitan counties have not been adequately addressed. Lack of sufficient broadband Internet in rural areas could make the nonresponse problem even worse. Knowing these factors and the urban–rural differences provides a basis for selecting communities that would benefit from additional outreach to help improve census participation. We find that the effects of race, housing, and other characteristics—such as marital status and even Internet access—on census participation show subtle and sometimes surprising differences depending on whether the non-metro county is adjacent to a metro county.

What Is the Low Response Score (LRS)?

The Census Low Response Score (LRS) identifies places where populations were difficult to enumerate in the 2010 Census as “block groups and tracts whose characteristics predict low census mail return rate and are highly correlated (negatively) with census and survey participation” (U.S. Census Bureau, 2019, p. 4). The LRS uses a statistical model to predict how far the actual return rate falls below 100% using 25 socioeconomic and demographic variables.[1] The first version of the LRS was computed using mail responses to the 2010 Census and data from the 2008–2012 American Community Survey (ACS). The earlier LRS was then updated using more current explanatory variables to predict where low responses would be a problem in the 2020 Census. These data can be downloaded from the Census Bureau’s Planning Database (https://www.census.gov/topics/research/guidance/planning-databases.html). The U.S. Census Bureau also provides the Response Outreach Area Mapper (ROAM) (https://www.census.gov/roam), an interactive web mapping tool that allows users to zoom in to the tract level.

Where Is the LRS Especially Low? 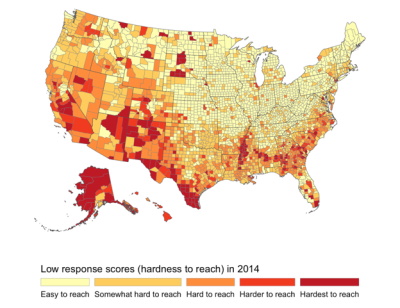 Notes: The colors from light to dark represent the percentile
categories of low response scores.
Source: 2014 Planning Database of the U.S. Census Bureau
and authors’ compilation.

To compare the LRS across different types of counties, we aggregate the original tract-level LRS to the county level. The county-level LRS is the average of the LRS of all tracts in a county, weighted by the number of households in each tract. We also rank the counties by LRS, using these categories to show increasing difficulty of participation: “easy to reach” (the top 50% of easiest-to-reach counties), “somewhat hard to reach” (the next 25%), “hard to reach” (the next 15%), “harder to reach” (next 5%), and “hardest to reach” (top 5% of counties with worst participation rates). Figure 1 shows for the 2014 LRS that most hard-to-reach counties lie in the South, especially in Texas, followed by Mississippi and Georgia. Many of the counties that are the hardest to reach are those where the majority of population are Hispanic, black Americans, or Native Americans, according to a report published by the Pew Research Center (Shaeffer, 2019). As for regional differences in the average LRS, the West has the worst score (21.0), ahead of the South (20.3); the Northeast (18.3) and Midwest (17.4) have the lowest or best LRS (17.4).

Do Rural Counties Have A Worse LRS?

Table 1. Count and Proportion for Each Counties of the LRS
Category, 2014

To answer this question we use the county typology prepared the USDA’s Economic Research Service, known as the 2013 Rural–Urban Continuum Code (RUCC) (https://www.ers.usda.gov/data-products/rural-urban-continuum-codes/documentation/). For ease of analysis, we separate the nine levels of RUCC into metro (RUCC 1–3) and rural counties (RUCC 4–9). Rural counties are further classified as rural counties adjacent to a metro county (RUCC 4, 6, and 8), and rural counties not adjacent to a metro county (RUCC 5, 7, and 9). We label these as rural, metro-adjacent and rural, non-metro-adjacent, respectively.

A simple comparison of the average 2014 LRS across the three types of counties does not reveal a statistically significant difference: The LRS ranges from 19.15% to 19.32%. However, a more refined analysis reveals that the shares of “hardest to reach” counties are highest in rural, non-metro-adjacent counties (6.64%), followed by rural, metro-adjacent counties (4.77%) and metro counties (3.94%). Below we investigate this in more detail. 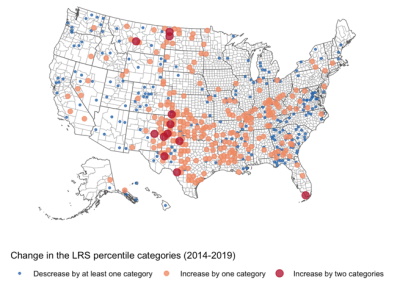 Notes: Orange and red dots indicate an increase of the low response
scores by one and two categories, respectively; blue dots indicate a
decrease by at least one category. Counties that show no change in
categories are omitted.
Source: 2014 and 2017 Planning Database of the Census Bureau and
authors’ compilation.

The Census Bureau published the 2019 LRS with the release of the 2013–2017 ACS, which allows us to predict changes in LRS as we approach the 2020 Census. In particular, we can tell where the LRS is likely to have improved and, more importantly, where it has likely worsened as local demographic factors have changed. We compare each county’s 2014 and 2019 LRS rankings; specifically, we determine whether it moved up or down in the ranking and, if it moved up (worse LRS), where it jumped by one or two categories. Figure 2 reveals that counties in the South are at increased risk of receiving lower survey responses in the 2020 Census, of which Texas, Oklahoma, and Kentucky are the top three states. Conversely, several counties (blue dots) across the nation are expected to improve their LRS in 2020.

The contrast in the changes between 2010 and 2020 in the LRS in metro and rural counties is notable (Table 2). Although small (less than 1%), the share of counties that are expected to worsen their LRS is greater for rural than for metro counties, and the situation is considerably worse for rural, non-metro-adjacent counties (0.95%) than it is for rural, metro-adjacent counties (0.29%). No metro county experienced an increase in the LRS by two ranking categories (such as from hard to reach to hardest to reach).

What Socioeconomic Variables Influence the LRS?

Overall, the strongest predictors of low response scores are race- and housing-related. In particular, higher shares of Hispanic and black populations, as well as vacant and renter-occupied housing units, are strongly associated with a lower response score on average. In contrast, places with higher shares of elderly (65 years and older), married family households, and non-Hispanic whites have lower low response scores (i.e., populations in these counties are more likely to be counted in the census). 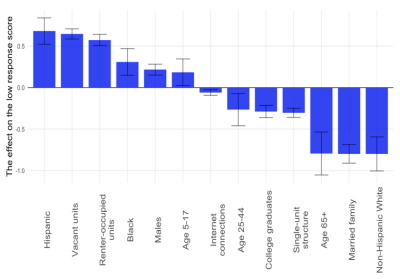 Notes: The y axis represents the magnitude of how much the
score would increase when a variable on the x axis increases by
one standard deviation from the mean. The error bar represents
the 95% confidence interval.

Do Effects of the Sociodemographic Variables also Differ by County Type?

Metro counties with an increase of 1 percentage point in vacant units have an increase in mail nonresponse rate by 0.11 percentage points. However, there are no statistically significant differences in this effect between metro and rural counties, regardless of adjacency status. A higher share of renter-occupied units would cause the nonresponse rate to increase by 0.18, 0.25, and 0.31 percentage points in metro, rural, metro-adjacent, and rural, non-metro-adjacent counties, respectively; these differences are significant. As opposed to vacant and renter housing, the presence of single-unit housing lowers the nonresponse rate; its effect is bigger in rural counties than in metro counties. As pointed out in the 2020 Census Operational Plan (U.S. Census Bureau, 2017, p. 8), some tactics would be employed to identify vacant households, but, more importantly, more resources should be used to increase visits to renter households, especially in rural areas.

Internet access is measured as the share of households with broadband Internet, which is associated with an improvement in the census responses in all county types. Internet access is important because the census will move away from mail surveys in 2020. In particular, the 2020 Census will be “encouraging the population to respond to the 2020 Census using the Internet, reducing the need for more expensive paper data capture” (U.S. Census Bureau, 2017, p. 15). Internet access reduces nonresponse rates in all counties. In metro counties, an additional 1-percentage point increase in the share of households with broadband would reduce the nonresponse rate by 0.07 percentage point. In rural counties, it provides an even greater benefit, reducing the nonresponse rate by an additional 0.11 percentage points in rural, metro-adjacent counties and 0.12 percentage points in rural, non-metro-adjacent counties. This underscores the critical importance of broadband access to ensuring an accurate and representative count of the population in 2020.

As is the case with many socioeconomic processes and concerns, the devil is often in the details. Given the stated goal of counting more of the population in 2020, scarce public resources will have to be deployed strategically to communities where under-participation problems are especially pronounced. Strong predictors of participation include race, housing arrangements, and other sociodemographic variables such as poverty rates. Further complicating the impacts of these factors is the fact that their importance varies across the metro-rural county spectrum, as a function of distance from or adjacency to metro areas.

Perhaps more importantly, this research raises new questions for further inquiry. What policies or mechanisms could help boost census participation? And, if targeted policies and incentives are put in place, or shown to be currently effective, what system could help to assess whether they are working?

Table A1. Descriptive Statistics of the Low Response Scores 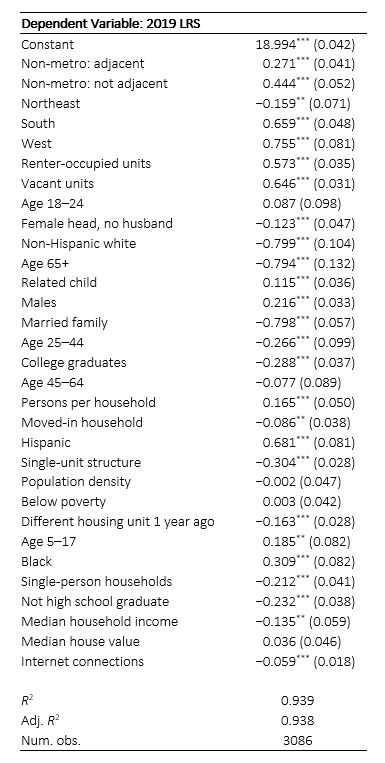 Notes: Single, double, and triple asterisks (*, **, ***) indicate
significance at the 10%, 5%, and 1% levels, respectively.
The independent variables are standardized by z-scores.

The regression model uses the county-level 2019 LRS as the dependent variable. The independent variables include the dummy variables representing county types and regions and the 25 variables used to construct the LRS at the census-tract level. The goal of the regression is not to repeat the practice of constructing the LRS but to examine differences in LRS across county types when all other determining variables are controlled for. As a by-product, we reevaluate the importance of the 25 variables to the LRS at the county level. To do so, we standardize these variables by their z-scores, which is the original value minus its average, divided by its standard deviation. The coefficient on each of them can be interpreted as how much the LRS would change when X increases by 1 standard deviation from the mean. Table A2 reports the results of the baseline regression model. The top six variables with positive coefficients and the top six with negative coefficients, plus internet connections, are presented in Figure 3.