The decennial census is an important national enumeration process that impacts livelihoods of households as well as community and regional welfare. Conducted every 10 years since 1790, it determines the number of people living in the United States, as mandated by Article 1, section 2 of the U.S. Constitution and Title 13 of the U.S. code (U.S. Census Bureau, 2019a). Along with other census-based data collection programs, it is used by numerous government programs that support education, employment, health, housing, energy, transportation, telecommunication, financial, and environmental activities. Decennial census data are used for accurate

This study reviews the key datasets and distribution of community development federal funds that rely on census data. We also discuss the impact of demographic changes and accuracy on funding for community development programs across the United States, including a case study presentation of how census-based poverty estimates influence the distribution of funding for the Expanded Food and Nutrition Education Program (EFNEP) program.

Problems and Potential Economic Losses Due to Census Miscounts and Undercounts

Decennial census miscounts and undercounts will result in flawed data estimates and cause a social equity problem (O’Hare, 2019) that has a profound impact on local, state, and national economies. A recent study by Elliott et al. (2019) indicates that the 2020 Census could potentially undercount the U.S. population by 0.27%–1.22%, which translates to between 900,000 and 4 million people. Miscounts may disproportionately affect some groups more than others. While white, non-Hispanic people have only a 0.03% risk of being undercounted, African American and Hispanic populations could be undercounted by 3.68% and 3.57%, respectively. Other hard-to-count populations are rural populations, renters, ethnic and racial minorities, and immigrants (Kane-Willis et al., 2019). Children under the age of 5 have a high risk of being undercounted by up to 6.31% (Elliott et al., 2019; Potyondy, 2017). While these percentages seem relatively small, such miscounts and undercounts can substantially impact a community’s future for a decade or longer.

Funds not received by a county due to an undercount are given to other states and regions. For example, in FY 2017, Title I programs, which provide financial assistance to local education agencies with relatively high percentages of children from low-income families, lost an estimated $1,700 per missed person (Reamer, 2019b). In FY 2015, the median loss per missed person on funds received from the U.S. Department of Health and Human Service was estimated to be $1,091. Many of the 37 states forfeited substantial funds, with losses ranging from $533 to $2,309 per missed person (Reamer, 2018b).

The allocation of federal funds is highly sensitive to the accuracy of the decennial census. Inaccuracies in enumeration can occur due to a number of reasons, the foremost among which include (Chapin, 2018)

Increased citizen participation to an online census survey, available in the upcoming census, may result in better estimates. Factoring in risk scenarios on miscounts, undercounts, and inaccuracies based on historical data (Elliott et al., 2019) at planning, developing, and implementation phases of community development programs will reduce potential losses to vulnerable communities.

Which Census Datasets Are Relevant for Federal Funds? 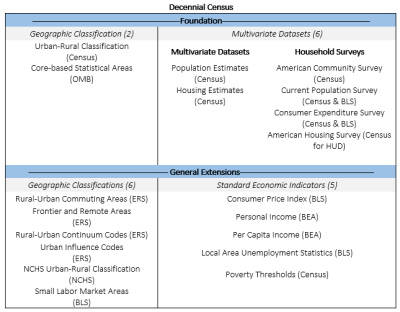 Based on decennial population density, the Census Bureau provides an urban–rural classification of all census tracts (Figure 1). Using the Urban-Rural Classification, American Community Survey and Population Estimates, the nation’s Core-Based Statistical Areas are delineated as metropolitan and micropolitan areas (Reamer, 2018a).

Five of the six geographical classification datasets (Rural–Urban Commuting Areas, Rural–Urban Continuum Codes, Urban-Influence Codes, Frontier and Remote Areas, Urban–Rural Classification) are associated with differentiating rural areas on the level of rurality or the adjacency to a city (Figure 1). Small Labor Market Areas make up the balance of the United States that is grouped in to one or more counties that are not major labor market areas (metropolitan and micropolitan areas) (Reamer, 2018a).

Population Estimates and Housing Estimates are updated annually with population and housing numbers based on vital statistics and tax records (Figure 1). The demographic information that is not collected in the decennial census is collected through the four survey datasets related to households: American Community Survey, Consumer Expenditure Survey, Current Population Survey, and American Housing Survey (Reamer, 2018a).

Several census datasets are relevant for determining eligibility for and equitable distribution of federal funds (Reamer, 2018a):

What Types of Federal Financial Assistance Are Available for Communities?

Federal financial assistance programs are dependent on the U.S. Census Bureau data for (Hotchkiss and Phelan, 2017)

Table 1. Community Development Program by
Type of Assistance and Role of Census-Derived
Datasets in Funding

How Do Population Changes Affect Funding for Community Development?

The ability to anticipate and recognize change within a community is vital for the future of community development programs. Population estimates indicate areas of growth or decline, while demographic data provide information in the areas of basic demographic (age, gender, race); social (education, marital status, household numbers); economic (income, poverty, employment); and housing (tenure, type, value) issues. For example, the Current Population Survey, a collaborative effort between the U.S. Bureau of Labor Statistics and the U.S. Census Bureau, provides information on labor force statistics. Such detailed data are vital to understanding and, hence, tailoring education programs for a community, for CES, and for other community-based programs. Without demographic information, creating culturally inclusive programming based on community participation and feedback would be impossible.

For specific information relating to families, the Census Bureau’s American Community Survey (ACS) can be valuable. This information provides specifics on family types and characteristics, which are especially beneficial when working with family and consumer sciences or community youth. The ACS also provides information on educational attainment (levels of education). When working with agriculture clientele, which is a major portion of CES efforts, the USDA Census of Agriculture is conducted every five years and provides data pertaining to farming families (race, age, gender) as well as hired migrant labor. 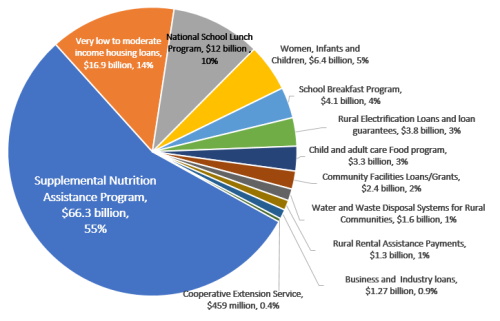 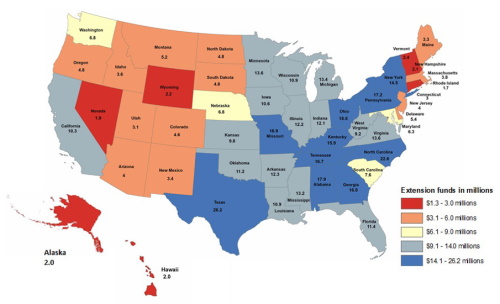 Figure 2 presents the distribution of $120 billion in federal funds to community development programs based on U.S. Census data in FY 2016. While a majority of these funds (77%) were allocated to food and nutrition programs, 15.2% of the funds supported housing programs, 7.4% helped build infrastructure and support businesses, and 0.4% were provided to CES programs.

Between food and nutrition programs, $66.3 billion (55% of funds) was allocated to the Supplemental Nutrition Assistance Program, followed by $12 billion (10%) to the National School Lunch Program. About $6.4 billion (5%) of the funds were allocated to the Women, Infants, and Children Program, followed by $4.1 billion (4.4%) to the School Breakfast Program and $3.3 billion (3%) to the Child and Adult Care Food Program (Reamer, 2019a).

Among programs related to housing, $16.9 billion (14% of funds) were allocated to very low to moderate income housing loans and $1.3 billion (1%) to rural rental assistance programs (Reamer, 2019a).

Amid programs supporting infrastructure and businesses, $3.8 billion (3% of funds) were allocated to rural electrification programs, $2.4 billion (2%) to community facilities programs, $1.6 billion (1%) to water and wastewater disposal systems for rural communities, and $1.27 billion (0.9%) to provide loans to business and industry (Reamer, 2019a).

The CES, with the help of the National Institute of Food and Agriculture (NIFA), is tasked with conveying the knowledge gained at the research level to the public and putting it into practice. Operated through the land-grant university system, the CES works as a federal partner to state and local governments to address national priorities through the allocation of grants and program oversight. Research is conducted at the university level by expert faculty members; county-based educators relay that information to the public to solve a variety of local problems, concerns, and hardships. In return, the agents collect input about current issues and transfer that information to the university, enabling research faculty to create priorities for future studies. As agricultural and environmental challenges are increasing and public needs are growing (Hoag, 2005), CES is a key part of the solution.

The CES was allocated $458.8 million in FY 2016 (Reamer, 2019a). Figure 3 illustrates the geographical distribution of these funds. Texas ($26.2 million), North Carolina ($22.6 million), and Ohio ($18.6 million) received the most funding. Many states in the northeast and southern United States received funds greater than $14 million.

The District of Columbia ($1.3 million), Rhode Island ($1.7 million), and Hawaii ($1.8 million) received less than $2 million in support of CES programs (Reamer, 2019a). Many states in the western United States received more than $3 million for such programs, with the exception of Nevada, Wyoming, Alaska, and Hawaii.

EFNEP serves as an example of how census data can influence the fund distribution in land-grant-based CES programs and, by extension, other types of federal funding that go to states and counties. EFNEP state allocations are driven by a complicated formula based on poverty-level-adjusted FY 1981 allocation for 1862 land-grant universities, poverty-level-adjusted FY 2007 allocations for 1890 land-grant universities, $100,000 for each 1862 and 1890 land grant, and an allocation of remaining funds based on the relative size of the population living at or below the 125% poverty level based on the most recent decennial census (in part on adjustment to funding levels received in 2007) (U.S. Department of Agriculture, 2018).

We used FY 2019 EFNEP funding by state and 2017 estimates of the number of individuals below the 125% poverty level at the state level (U.S. Census, 2019b) in a regression analysis to examine the influence of census-based poverty estimates on EFNEP funding levels. The analysis shows the impact of undercounting the poor (as defined here) in funding levels for this program and, hence, serves as an example of how census counts can influence fund distribution. Because of the increased funding for states with an 1890 land grant, we also included an 1890 school dummy variable in the analysis. Total EFNEP funding for FY 2019 is $67.4 million, with averaging funding per state (including the District of Columbia and Puerto Rico) at $1.3 million; our analysis accounted for 61.9 million poor individuals, with a per state average of 1,189,616 individuals. Based on our analysis, one additional poor person leads to an increase in EFNEP funding of $0.56 (Table 2). On average, a 10% increase in the estimated number of poor at the state level would result in an increase of $66,349 in EFNEP funding. Hence, census estimates regarding the number of poor people definitely matter in determining the distribution of funding for this program.

This study presented the federal census datasets that are key to funding community development programs across United States and the mechanism through which funds are allocated. Spatial and temporal trends of federal funding were presented as a result of demographic changes.

The decennial census is a single opportunity to impact federal programs every 10 years. The U.S. Census Bureau has the responsibility to accurately estimate the U.S. population, an estimate that will in turn impact households, communities, states, and the nation. Undercounts or miscounts can significantly impact vulnerable population across communities, as demonstrated in the case study. Factoring in undercounts or miscounts in community planning may alleviate economic losses.

CES programs across the nation can play a crucial role through education and outreach programs about the importance of participation in the decennial census and aid in the accurate count of people and households. An accurate census and increased citizen participation will ensure fair and equitable distribution of funds to support food and nutrition programs, rural housing, rural infrastructure, and CES programs across the United States.

Carpenter, R.B., and A. Reamer. 2010. “Counting for Dollars: The Role of the Decennial Census in the Distribution of Federal Funds.” Brookings Institute Metropolitan Policy Program. Available online: https://www.brookings.edu/research/counting-for-dollars-the-role-of-the-decennial-census-in-the-distribution-of-federal-funds/.