Since the advent of the Supplemental Revenue Assistance Program (SURE) as a free supplement to crop insurance in the 2008 Farm Bill, shallow-loss policies—insurance that covers only the very top segment of losses—have become an area of increasing focus in the farm safety net. These policies provide coverage for smaller revenue losses in the range where revenues remain higher than the guarantee provided by crop revenue insurance, and are more politically palatable than direct payments in times of record-high farm revenues. While SURE is history, debate continues in Congress over a range of policy alternatives including deductible and coinsurance-style revenue insurance, area coverage, whole farm vs. single crop, and even price supports, all of which are heavily subsidized (Shields and Schnepf, 2013).

With so many alternative insurance policies proposed for the new farm safety net, it is easy to assume that the exact risk-management features of each policy should drive the discussion. This is not the case. If it were, we would expect to see both differences in administrative costs of adjusting claims (the loss adjustment costs of an insurer) and a willingness by farmers to accept higher insurance premiums for better risk management (a risk premium), each of which could potentially be passed on as savings to taxpayers. However, using the deductible versus coinsurance choice as a motivating example, we find that both risk premiums and changes in loss adjustment costs are economically insignificant across a broad range of shallow-loss policies, crops, and counties, relative to differences in the expected value of claims payments. This result is driven largely by the nature of shallow-loss policies, which act on smaller, more frequent claims around the peak of the revenue distribution. Our research suggests that policy specifics can be ignored if they do not materially affect the level of claims payments, and policy makers should focus almost exclusively on the expected cost of proposed shallow-loss programs.

Description of Insurance Terms:
Shallow loss—A small farm revenue loss, too small to be covered under traditional crop insurance.
Deductible—An insurance policy feature which acts as a loss limit; the insurer generally pays all losses beyond the deductible.
Coinsurance—An insurance policy feature where the policyholder pays a percentage of every loss; can be combined with a deductible or administered separately.
Risk Premium—A dollar value for better risk management, when comparing two insurance policies with the same average value of claims payments.
Loss Adjustment Expenses—Also known as loss adjustment costs or claims adjusting costs; the administrative costs an insurer incurs in the process of adjusting claims.

For example, consider a farmer who takes the standard crop insurance with a guarantee of 80% of mean revenue per acre. This arrangement would provide dollar-for-dollar payments for losses below the 80% threshold. If we choose a shallow-loss insurance policy identical to the original SURE policy, but ignoring the disaster component, we would have a coinsurance policy with a shallow-loss coverage threshold at 90% of mean revenue, and with a 60% reimbursement rate. In the insurance literature, this policy would be identified as carrying 40% coinsurance, which is the insured party’s share of the loss. The policy would pay 60 cents for every dollar of losses below the 90% threshold, down to the 80% threshold where the standard crop insurance kicks in. In contrast, the farmer may view a shallow-loss deductible policy with an 86% threshold as equally appealing, or indifferent. The deductible policy pays dollar-for-dollar losses below 86% of mean revenue, effectively just increasing the crop insurance guarantee. The indifferent deductible threshold will always be lower than the coinsurance threshold, but its exact level will depend on the farmer’s risk aversion. For winter wheat farmers with moderate risk aversion in Hyde County, S.D., we estimate that the expected value of claims payments is $17.23 per acre under the coinsurance program above, but only $17.22 under the indifferent deductible program with an 86% threshold, so the risk premium is $0.01 per acre. 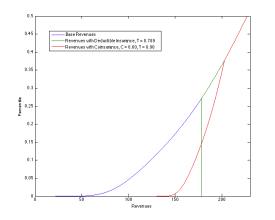 Effect of Deductible and Coinsurance on
the Cumulative Distribution of Revenues

The deductible versus coinsurance choice also affects the size and frequency of claims, which may affect the administrative costs associated with claims payments. When comparing insurance policies of equal expected value, the coinsurance guarantee must be higher than the deductible guarantee, so switching from deductible to coinsurance will lead to more frequent claims of smaller sizes. A well-known model for claims adjustment costs (Raviv, 1979) includes a fixed cost per claim, a variable cost based on the size of the claims payment, and, possibly, returns to scale, whereby each additional claim becomes cheaper to adjust because of efficiencies in an organization dedicated to adjusting claims. Thus, whether the change from deductible to coinsurance will lead to higher loss adjustment costs depends on the exact cost structure of the insurer.

Estimating the Distribution of Revenues Per Acre

To evaluate these trade-offs, we started by estimating probability distributions of per acre revenues for representative farmers of various crops in a number of U.S. counties. County-level and national-level yield data are drawn from the National Agricultural Statistical Service (NASS) for the period 1975-2011, with expected and realized prices taken from grain futures prices, according to USDA Risk Management Agency (RMA) definitions. We used statistical methods to estimate the joint distribution of yields and prices at the county level, following Cooper, Delbecq, and Davis (2012), and to forecast that distribution for the 2012 crop year, just following the final year of the dataset. A sample of our estimated revenue distribution for winter wheat in Hyde County, S.D., is shown in Figure 2. 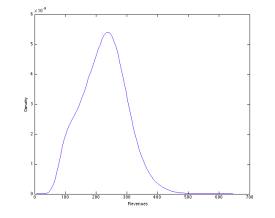 Estimated risk premiums were stable as well, and small. For nearly all combinations of crop, county, underlying coverage, and risk aversion, risk premiums were estimated to be less than $0.15 per acre and, in many cases, were less than $0.05 per acre. These values are economically insignificant when compared to insurance policies with fair values ranging from $10 up to $100+ per acre in some high-revenue corn counties. The maximum risk premium estimated was $0.19 per acre for DeKalb, IL, where per acre revenues were $974.44 and the 90/60 coinsurance policy had a fair value of $48.31. Table 1 shows estimated means and standard deviations of revenues for select crops/counties, and the highest risk-premium estimated. The highest risk premiums were observed when risk aversion was sufficient to turn down a $100 gamble with 3:1 odds of winning.

We obtained crop insurance performance data from the RMA Summary of Business for years 1995-2010. These data included premiums, indemnities, and number of units with claims by crop, county, coverage level, and year for all U.S. counties. We also obtained a crop insurance industry report—the 2011 Grant-Thornton Report—which uses a survey of U.S. crop insurers to estimate loss adjustment expenses as a percentage of gross premiums (also for 1995-2010). Loss adjustment expenses were only available on a national aggregate basis, so we aggregated the RMA data and combined the two into a simple regression model estimating the structure of loss adjustment costs, as described above.

We estimated per-claim fixed costs of $132.41, variable costs of 4.39% of indemnity payments, and returns to scale of 0.025 cents per claim, on a national scale. Given estimated distributions of per-acre revenues, these results can be used to estimate expected savings (or costs) from switching between deductible and coinsurance shallow-loss coverage. Variable costs will be identical for two policies with the same fair value, so comparing deductibles versus coinsurance means assessing fixed costs saved against lost economies of scale. Using our data for wheat in Hyde County, S.D., we estimate that moving from our sample—SURE-style coinsurance policy—to a deductible policy of equal fair value should result in higher claims costs, on average, of about $0.002 per acre per year.

As with the risk premium differences estimated above, these values are economically insignificant, even when extended to policies with different expected values of claims payments. If we consider an 89% shallow-loss deductible guarantee with base coverage at 80%, it has an expected value of $2.11 per acre higher than our sample 90/60 coinsurance policy. In this scenario, the higher expected value of payments will lead to higher variable loss adjustment costs, averaging $0.033 per acre. So, while variable costs are likely their largest component, any changes in loss adjustment costs are likely to be dwarfed by increases in expected claims payments.

As we witness the continued transition of the farm safety net away from direct payments and towards subsidized insurance-style products like shallow-loss policies, it is important to remember that risk management may not be the primary concern driving these innovations. This article has presented evidence that farmers are not likely to care about the exact risk management characteristics of shallow-loss crop insurance, and that efficiency gains from saved loss adjustment expenses are not likely to arise from subtle differences between policies.

We do not, however, address distributional issues of which constituencies are the primary recipients of subsidies, a complicated political reality. Smith, Babcock, and Goodwin (2012) explain how the Senate version of the Farm Bill favors corn, wheat, and soybean producers, but the House version favors rice, peanut, and cotton producers. They also point out that both bills’ programs are tied to the amount of land farmed, meaning that the bulk of farmer subsidies go to the largest farms. Given the heavy crop insurance subsidies to farmers, it is not clear whether risk premiums would ever actually be passed on as savings to taxpayers. Beyond the financial benefits to farmers themselves, Smith, Babcock, and Goodwin (2012) estimate $3 billion per year in subsidies to crop insurance companies, which begs the similar question of whether taxpayers would ever see savings in loss adjustment costs. These issues clearly need to be addressed—as does the decision behind large taxpayer subsidies in general—but these discussions are far beyond the scope of this article. Nonetheless, assuming distributional considerations are managed appropriately, shallow-loss policies can be judged almost exclusively on the expected value of claims and subsidy payments.

David Zilberman (zilber11@berkeley.edu) is Professor and holds the Robinson chair in the Department of Agricultural and Resource Economics at the University of California, Berkeley.

The authors would like to thank the members of the AAEA Annual Meeting sessions; the SCC-76 Risk Group Annual Meeting sessions; guest editor of this issue, Joshua Woodard; and an anonymous reviewer for their insightful feedback. We are grateful for research support from USDA Cooperative Research Agreement No. 58-3000-8-0069 and USDA-NIFA Hatch Project Number RI00H-108.

The views expressed herein are those of the authors and not necessarily those of the Economic Research Service or the USDA. Of course, any errors or omissions are our own.