The U.S. Senate and the U.S. House of Representatives Committee on Agriculture each reported out farm bills during 2012. Final action was not completed, and the 2012 Farm Bill was extended through September 2013. In early 2013, the Senate and House each passed a farm bill, but the resolution of the differing bills remains uncertain. Both bills include new farm and crop insurance programs designed to supplement current crop insurance by providing protection from small revenue losses. This article examines how these programs may perform and their consequences for the demand for crop insurance.

The Senate and House farm bills eliminate the Average Crop Revenue Election Program (ACRE), Supplemental Revenue Assistance Program (SURE), Counter-cyclical Payment Program, and Direct Payment Program. Instead, the Senate bill gives a producer of program crops, excluding cotton, the choice between (1) the Agriculture Risk Coverage (ARC) program based on a county’s revenue loss or on an individual farm’s revenue loss, and (2) the Adverse Market Payments (AMP) program, which makes a payment when market prices are below 55% of historical farm prices. ARC covers “shallow losses” between 12% and 22% of the historical or “benchmark” revenue on a portion of the producer’s acreage.

The House bill gives program crop producers, excluding cotton, a choice of (1) Revenue Loss Coverage (RLC), or (2) Price Loss Coverage (PLC). RLC covers losses on 15% to 25% of a county’s benchmark revenue, which is based on historical yields and the higher of a fixed reference price or historical farm prices, and is paid on part of the producer’s acreage. PLC pays when farm prices during the first five months of the crop year are below the reference price.

In addition to the supplemental revenue farm programs, to be delivered by the U.S. Department of Agriculture’s (USDA) Farm Service Agency, both bills provide new crop insurance programs, to be delivered by the crop insurance companies, to supplement existing crop insurance. The Stacked Income Protection (STAX) program is only for upland cotton and the Supplemental Coverage Option (SCO) would be for all insured crops. Both STAX and SCO protect against a shortfall in county revenue, use crop insurance prices, cover the crop insurance deductible, and require the producer to pay a premium, unlike the farm program choices. Premiums for STAX are subsidized at an 80% rate and for SCO, 65%. STAX coverage can vary from 70% to 90% of expected county revenue, may be purchased alone or with an underlying crop insurance policy, but cannot overlap with crop insurance. Similarly, SCO cannot overlap crop insurance, so its coverage ranges from the underlying policy’s coverage up to 90% of expected county revenue. SCO has a deductible of 22% if the producer is in ARC and 10% otherwise. A producer in RLC may not purchase SCO.

The New Programs: Complements or Substitutes for Crop Insurance?

Crop insurance currently permits a producer to protect from 50% to 85% of the individual farm’s expected yield or revenue for major crops, or from 65% to 90% of expected county yield or revenue in some counties. The two farm bills’ revenue programs provide farmers with a host of new and complex risk management choices. A producer’s choices could include a plan of crop insurance, such as individual or county revenue or yield plans; a crop insurance level of coverage; a farm program supplemental plan; and a crop insurance supplemental plan. Consider the Senate bill. A producer selecting individual crop insurance could choose among three major plans of insurance, eight coverage levels for each, four supplemental program options—none, ARC county coverage, ARC individual coverage, or AMP—and three SCO choices—none, 10% deductible, and 22% deductible if ARC is chosen—for a total of 192 possible options.

Figure 1 illustrates some of the trade-offs inherent in these options by using the Senate bill. Case 1 shows a producer selecting the current Revenue Protection (RP), or the RP plan of crop insurance, at 85% coverage along with the ARC program. ARC, either individual (ARCI) or county (ARCC) option, covers 78% to 88% of historical revenue and there is no coverage on 12% of revenue. ARC coverage is shown as offset to indicate that the RP and ARC coverage bands can overlap, but indemnities and ARC payments are not deducted from one another, so there is a potential redundancy in coverage. Case 2 shows the producer with 75% RP coverage, opting out of ARC but purchasing SCO with its 10% deductible, which cannot overlap with RP. Case 3 shows the producer with 75% RP along with ARC and SCO. The deductible on SCO is now 22%, which is required if ARC is elected, in order to avoid an overlap of SCO and ARC. If the producer did not buy SCO, there would be a coverage gap for the 75% to 78% band, which is assumed to be filled by the purchase of SCO. Case 4 shows a producer electing minimal Catastrophic Coverage, known as CAT, which protects 50% of expected yield at 55% of the expected price, along with SCO. SCO covers 50% to 90% of expected county yield. Case 5 shows the CAT participant electing ARC and filling the rest of the coverage gap with 22% deductible SCO. 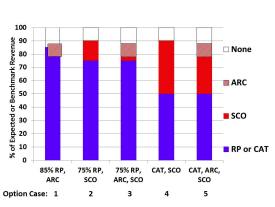 These examples raise the issue of whether producers will use the new supplemental programs to replace part of their existing crop insurance protection or add to it. We started out expecting that ARC and RLC, which are free and have coverage bands similar to the upper range of crop insurance, would cause farmers to reduce crop insurance coverage at high coverage levels. Previous work (Bulut, Collins, and Zacharias, 2012) showed that in the absence of restrictions on coverage, a producer would replace a portion of fairly priced individual crop insurance with an underpriced area plan, with the extent depending on the correlation between farm and area yields. However, even though the program options are free, there are factors that reduce their potential substitution with crop insurance: the farm program options cover different prices than crop insurance, area plans are a limited substitute for the risk protection of individual insurance plans due to yield basis risk, the farm program option payments and crop insurance indemnities are not offset against one another, and the Senate version is subject to payment limits, while crop insurance is not.

The crop insurance supplemental options, SCO and STAX, also cover the upper ranges that crop insurance covers, have high premium subsidies, have no payment limits, but cannot overlap crop insurance, suggesting they may displace crop insurance. Both are area plans which have yield basis risk, which may limit buy down. The higher deductible on SCO required if a producer participates in the Senate’s ARC may cause some producers to skip that farm program option and opt for the lower deductible SCO policy.

Several studies have examined producer appeal for supplemental revenue programs based on expected payments from these programs. In order to delve into producer behavior, we look more closely at the interaction effects by valuing and ranking a representative farmer’s choice among farm bill and crop insurance options using the farmer’s Certainty Equivalent, or CE, measure of wealth. CE is the minimum amount of money a farmer is willing to accept to be indifferent between undertaking farming revenue risk with a farm policy option and not taking the farming revenue risk and keeping the money instead. The farmer’s CE value for an option is computed as net of the CE value without the option, which emphasizes the option’s contribution to the CE over and above that when there is no government support.

We simulate a corn producer’s decisions with the use of a standard economic model of financial well-being. For each possible crop insurance and farm program option a farmer may choose, crop insurance indemnities and farm program payments are computed using 10,000 simulated observations of yields and prices. Then the producer’s CE values for each option are determined and ranked. A paper providing the model; simulation methods; results, including other counties, crops, and scenarios with alternative farm characteristics; and a discussion of previous literature’s findings is available on request from the authors.

Figure 2 illustrates some key simulated outcomes using the case for a corn producer with $50,000 initial income, operating on 100 acres in Champaign County, Ill., for 2013. This base case uses standard assumptions about farmer risk aversion and examines the provisions and subsidy rates as specified in the 2012 versions of the House and Senate farm bills, with a base insurance price of $5.68 per bu., and a farm expected yield equal to the county expected yield. 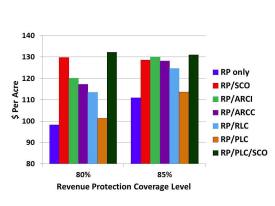 So What May a Farmer Do?

Figure 2 shows the producer’s valuation of participating in farm bill options in terms of the CE of wealth in dollars per acre, net of the CE of wealth under no government support. The CE is shown at high coverage levels for RP alone, the most popular current revenue plan of insurance for corn producers, and for RP in combination with the farm bill supplemental revenue options. ARC is not shown with SCO, because SCO coverage is not available with ARC when the producer buys crop insurance at 80% and 85% coverage because of SCO’s high deductible. AMP was not modeled, as it was just recently introduced; moreover, its reference prices—which are very low relative to prices used in ARC, RLC and PLC—mean it is likely a less attractive participation option.

The simulated data suggest a series of conclusions:

Finally, there is the issue of taxpayer cost. The new farm program supplemental options are more costly than the 2008 Farm Bill’s supplemental programs, ACRE and SURE, although these costs are more than offset by the elimination of Direct Payments. Similarly, the crop insurance supplemental options increase projected spending of crop insurance (Chite, 2013). While the farm bills’ new choices would provide producers with greater income protection, and some also provide multiyear risk protection, the overlap and substitution potential with crop insurance, as well as program costs, are issues that are likely to garner continued scrutiny, if these or similar options are enacted.