The United States is the country of immigrants, with 20% of the world’s international migrants. The 43 million foreign-born U.S. residents in 2014 represent almost one-seventh of the 320 million Americans. In agriculture, 70% of hired workers are immigrants. The United States has a stable and increasingly settled population of 11 million unauthorized foreigners, accounting for perhaps half of the unauthorized foreigners in industrial countries.

The fate of America’s 11 million unauthorized migrants—a quarter of all migrants—has been debated for the past decade. During the 1990s, the number of unauthorized foreigners rose rapidly, as it did again after recovery from the 2000–01 recession. The number peaked at over 12 million in 2007 before declining during and after the 2008–09 recession (Passel and Cohn, 2016a). The Pew Research Center estimates that half of unauthorized adults had been in the United States for at least 14 years by 2014, meaning that they arrived in 2000 or earlier (Passel and Cohn, 2016a). 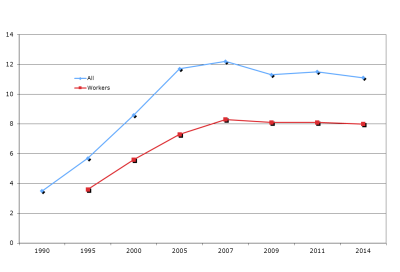 The presence of so many unauthorized individuals was a theme of the 2016 presidential election debates. Frequent criticism was that these individuals had a harmful effect on U.S. workers, that they do not pay sufficient taxes, and that they are a source of increased crime. An assessment by Blau and Mackie (2016) found that the wage impact of the presence of migrants on the wages of U.S. born workers was small, that their fiscal impact on the federal government is positive, and that unauthorized foreigners are actually less likely to commit non-immigration-related crimes than are similarly situated U.S.-born individuals.

Eight million unauthorized foreigners are part of the U.S. labor force, and at least a million are employed primarily in agriculture. It cannot be a surprise, therefore, to learn that the Trump administration’s plans for a wall on the Mexico-U.S. border, increased deportations, and punishment of “sanctuary cities” that refuse to cooperate with the Department of Homeland Security (DHS) will be disruptive to American agriculture. New enforcement measures to slow the entry of unauthorized foreigners and plans to remove those already in the United States would have a profound impact on American agriculture. Relying on national household survey data, Passel and Cohn (2016b) estimated that 17% of those employed in agriculture in 2014 were unauthorized, followed by 13% unauthorized workers in the construction industry and 9% in the hospitality sector. Slightly different estimates are found by occupation, with 26% of those with farming occupations were unauthorized, followed by 15% in construction, and 9% each in production and service occupations. 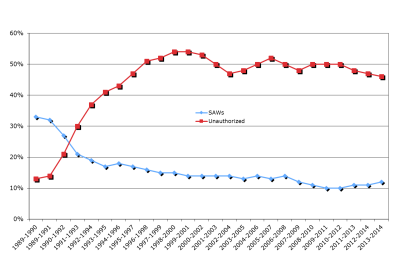 Moving from all agricultural workers to those employed on crop farms, the U.S. Department of Labor's National Agricultural Worker Survey (NAWS) reports that approximately half of workers on crop farms are unauthorized. This calculation is derived from the NAWS estimate that 70% of the 1.8 million workers employed at some time during a typical year on crop farms were born in Mexico, and that 70% of foreign-born crop workers are unauthorized. There are no statistical data on the characteristics of the estimated 700,000 workers employed on livestock farms, but they too are believed to be mostly Mexican-born and unauthorized (Rural Migration News, 2010).

Immigration and the Changing Agricultural Workforce

These snapshots of the current situation do not convey historic adjustments to varying labor situations in American agriculture. The history of American agriculture is also a history of immigrant labor. As early as the 1860s, Chinese laborers were imported to help construct the first transcontinental railroad connecting the growing cities in the east with expanding settlements in the western United States. After the railroad was completed in 1869, many of these workers ended up in California cities. As their numbers increased, anti-Chinese sentiment grew and federal law restricting their immigration was enacted in 1882. Japanese immigrants, another significant group filling seasonal farm jobs, were excluded in 1908. Labor shortages during the First World War led to the first Bracero Program for Mexican guest workers between 1917 and 1921. Filipinos from what was then an American colony were the most important group of newcomers arriving to do farm work during 1920s.

In the late 1930s, when Dust Bowl refugees from Oklahoma and Arkansas, among other locations, began to dominate the farm workforce on the West Coast, there was a growing sense that the existing farm labor system was “un-American.” John Steinbeck’s Grapes of Wrath and Carey McWilliams’ Factories in the Fields chronicled the issues. McWilliams argued that agricultural workers—but especially those working on large farms—should have the same labor protections as non-farm factory workers. Farm workers had been excluded from the National Labor Relations Act of 1935 and, despite many union efforts to organize farm workers without NLRA protections, it was only in 1962 that Cesar Chavez and Dolores Huerta founded the National Farm Workers Association, the union that became the United Farm Workers (UFW) and won 40% wage increases in table grape contracts in 1966, largely because Bracero workers were not available (Martin, 2003).

Farm employers—encouraged by divided farm labor reformers and the labor shortages created by World War II—persuaded the U.S. government to maintain the Bracero program. During World War II, fewer than 75,000 Mexican workers entered the United States each year, but by the mid-1950s, this number had increased to 450,000 annually. A 1959 government study (US Department of Labor, 1959) concluded that the availability of braceros held down farm wages, encouraging Mexican Americans to move to cities where they did not face competition from braceros. The Bracero Program was ended in 1964 as part of a “civil rights for Hispanics” initiative.

Unauthorized Mexico-U.S. migration began to increase in the late 1970s, as farm employers turned to labor contractors who recruited rural Mexicans to replace striking UFW workers. Unauthorized Mexico-U.S. migration rose again with the peso devaluations of the early 1980s. In response, the Immigration Reform and Control Act of 1986 (IRCA) imposed the first federal sanctions on employers who hired unauthorized workers and legalized over 1.1 million unauthorized farm workers. Now legal, these workers were more mobile and spread throughout the United States. Those leaving agriculture were replaced by unauthorized newcomers from Mexico.

Throughout this long, troubled period, whenever agricultural labor became scarce or more expensive, there was a surge of interest in technical change to reduce reliance on hand labor. In the late years of the eighteenth century, approximately 95% of Americans were engaged in agriculture. Technical change has allowed that proportion to drop to less than 2% today. The production of the “big-five crops”—corn, soybeans, wheat, cotton, and rice—has become highly mechanized.

In other sectors, machines now shake almonds and walnuts from trees and sweep them into rows for easy recovery. Dwarf fruit trees allow shorter ladders—or no ladders—for faster picking. Slow-moving conveyor belts travel ahead of workers as they harvest berries, broccoli, and other vegetables, removing the need for humans to carry heavy and often fragile harvested produce. New varieties of tomatoes for canning and processing have been bred to ripen uniformly, and machines can now pick those tomatoes quickly (Martin and Olmstead, 1985).

The IRCA allowed unauthorized workers to become probationary immigrants—Special Agricultural Workers (SAW)—in 1987–88. Many SAW workers left agriculture and were replaced by unauthorized workers (U.S. Commission on Agricultural Workers, 1992). Approximately 10% of legal workers today were legalized under the SAWs program. In contrast, most of the other legal foreign-born workers received immigrant visas via family unification or another route.

The U.S. Commission on Agricultural Workers (1992) reported that before the IRCA (1986), unauthorized workers were concentrated on fruit-growing operations in California and Texas and in farm labor contractor crews that pruned, hoed, and performed other seasonal tasks on Western farms. The distribution of unauthorized workers before IRCA reflected the risk of producer losses if the U.S. Border Patrol removed them during inspections. As a result, there was a higher share of unauthorized workers in winter citrus than in more perishable summer vegetables. This difference can be explained by the fact that oranges can remain on trees for several weeks if necessary until new workers can be recruited, while a sudden loss of workers may result in a total loss of vegetable crops.

The practical effect of the IRCA was to divert immigration enforcement agents away from chasing people in fields and into checking paperwork completed by employers and newly hired workers. This switch reduced growers’ risk of suddenly losing unauthorized workers and encouraged them to hire Mexican-born workers as long as the paperwork had been properly completed.

According to NAWS, the share of unauthorized workers has been about 50% in all commodities and areas since around 2000. While there are no reliable data, dairy farmers report that approximately half of their workers are immigrants, and that many are unauthorized (Rural Migration News, 2010). On the other hand, farmers in some commodities and areas supplement their workforces through the legal H-2A guest worker program originally created in 1952 to bring in workers for the sugar cane and apple industries. The U.S. Department of Labor certified 165,000 farm jobs to be filled by H-2A workers in FY16, but some workers fill two or more jobs. The H-2A program is expanding, doubling over the past decade. Florida and North Carolina lead H-2A use among the states, accounting for a quarter of all jobs certified. The states of Washington (apples) and California (vegetables) have the fastest growth in certifications, with the number of H-2A jobs doubling over the past five years.

It now seems that the period between 1980 and 2010 was one of abundance in Mexican farm labor, and that era is now largely over. Rising labor costs are likely to prompt a new wave of labor-saving mechanization. A variety of machines are being developed to harvest a number of crops, but their adoption and dispersion is always a function of relative cost scenarios. With labor costs continuing to rise, including recent California legislation raising the minimum wage from $10 an hour in 2016 to $15 by 2022, the trend toward labor-displacing technical change will continue.

Two scenarios are possible. First, the number of H-2A guest workers could continue to increase, returning some of US agriculture to labor conditions of the Bracero era, when foreign guest workers lived on the farms where they worked and dominated workforces in particular crops.  Second, rising labor costs could prompt labor-saving mechanization and more imports, with the mix between mechanized production at home and imports from lower-wage countries determined by the speed with which management and technical changes proceed versus trade policies and more efficient production of fruits and vegetables for the US abroad.  The exact mix of guest workers, mechanization, and imports thus depends on US migration and trade policies as well as technology improvements and production abroad.