Hired workers are not employed evenly throughout U.S. agriculture. Instead, they are concentrated in three inter-related ways, by commodity, geography, and size of farm. Fewer than 75,000 producers of fruits, vegetables, and horticultural specialty crops (collectively known as FVH commodities) paid half of the $26 billion in farm labor expenses in 2007, according to the Census of Agriculture. Most of these expenses were paid by large farm employers in California, Florida, Texas, and Washington.

Hired farm workers, especially those employed on FVH farms, are mostly immigrants from Mexico. Before the Immigration Reform and Control Act of 1986, (IRCA) the best evidence suggested that up to a quarter of hired farm workers in southwestern states such as California were unauthorized. Their distribution in the early 1980s reflected the risks to producers of completing tasks in a timely way under the pre-1986 enforcement strategy, which involved driving into fields and checking workers. The highest share of unauthorized workers were employed working with less perishable crops such as citrus, while there were fewer unauthorized workers working with more perishable leafy green vegetables (Martin, Mines, Diaz, 1985).

This article summarizes the changing status of hired workers employed on crop farms. Data are drawn primarily from the U.S. Department of Labor’s National Agricultural Workers Survey (NAWS), which has been interviewing 2,000 to 3,000 farm workers a year since 1989. The NAWS, launched to determine if the 1986 IRCA contributed to farm labor shortages, has continued to generate a wealth of information on hired farm workers and their families. The NAWS does not interview workers employed on livestock farms and excludes H-2A guest workers on crop farms.

Less than a quarter of the 2.2 million U.S. farms reported expenses for hired labor in the 2007 Census of Agriculture (COA). Approximately 482,000 farms reported almost $22 billion in labor expenses for workers hired directly by the farm operator and $4.5 billion for contract labor—workers brought to farms by labor contractors and other intermediaries—totaling $26 billion or a seventh of total variable production expenses in agriculture.

Farmers report to the COA the number of workers they hire directly. They reported 2.6 million hires in 2007, including 35%—or 910,000 workers—which were hired for 150 days or more on their farms. This 2.6 million jobs-on-farms number must be interpreted carefully. It does not include workers brought to farms by contractors, and it double counts individuals who are employed on two farms and reported by two farmers.

Table 1 combines labor expense data from the COA and earnings data from NASS to estimate the number of full-time equivalent (FTE) or 2,080 hour-a year jobs on U.S. farms. It divides labor expenses of $26.4 billion by NASS’s annual average hourly earnings of $10.21 for hired farm workers in 2007 to estimate that there were 1.2 million FTE jobs in 2007; results were similar for 2002. To put hired farm worker employment in perspective, food manufacturing employment averages about 1.4 million jobs, including 500,000 in meatpacking.

There are more farm workers than the average number of farm jobs because of seasonality and turnover, that is, more than 1.2 million individuals work on farms during a typical year in order to fill peak employment requirements and to account for the fact that many workers are employed less than a full year. During the 1980s, the number of individuals employed sometime during the year for wages on U.S. farms was 2.5 million according to the December Current Population Survey (Oliveira, 1989). A count of unique individuals reported by agricultural establishments to unemployment insurance (UI) authorities in California, a state that requires all employers paying $100 or more in quarterly wages to provide UI coverage to workers, found two individuals employed for each FTE farm job in the 1990s (Khan, Martin, Hardiman, 2004). If we apply this same two-to-one ratio between workers and FTE jobs today, there are 2.4 million hired farm workers across the United States, including 800,000 in California.

The NAWS finds a mostly young, Mexican-born, and male agricultural work force working on crops. In recent years, 70% of crop workers were born in Mexico, three-fourths were male, and half were unauthorized. Half of crop workers were under 35, two-thirds had less than 10 years schooling, and two-thirds spoke little or no English. 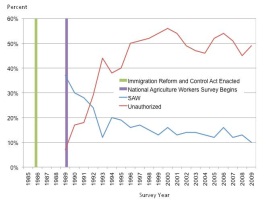 Some 1.1 million unauthorized farm workers were legalized in 1987-88 under the Special Agricultural Workers (SAW) program, and there were four SAWs for each unauthorized worker in the first NAWS survey in 1989 (see Figure 1).

Table 3 examines two groups of farm workers whose share of crop workers changed over time. SAW-legalized farm worker employment, including a few workers legalized under the general legalization and Central American programs, fell from 32% of the agricultural work force to 16% between 1989-91 and 1998-00; their share has since stabilized at just over 10% of crop workers. Foreign-born newcomers—workers in the United States less than a year before they were interviewed—rose sharply during the 1990s to almost a quarter of all crop workers in 1998-00, and fell to less than 10% of workers between 2007 and 2009.

As would be expected, SAW-legalized workers are much older than newcomers: their average age was 49 in 2007-09, versus 25 for newcomers. Three-fourths of the SAW-legalized workers did not move, but a quarter returned to Mexico , usually over the Christmas holidays. Over 90% of the newcomers moved from Mexico to the United States in the year before they were interviewed.

SAW-legalized workers had less education than newcomers, an average five versus six years of schooling in 2007, but were more likely to speak English well and to have incomes above the poverty line. By contrast, 94% of newcomers had below-poverty level incomes. Almost one-third of the newcomers worked for labor contractors, versus just 12% of SAW-legalized workers in 2007. Newcomers, many of whom were in the United States less than 12 months before being interviewed, had fewer days of farm work than SAW-legalized workers, who have been doing farm work for two decades.

In a hired farm work force that numbers 2.5 million individuals sometime during a typical year, equivalent to the average number of janitors and cleaners, farm worker averages can be misleading. For example, almost all foreign-born farm workers were born in Mexico, but increasingly Mexican-born U.S. farm workers are from southern Mexico rather than west-central Mexico, the origin of Braceros—Mexican guest workers admitted between 1942 and 1964. Some Spanish-speaking west-central Mexicans have become supervisors of newly arrived indigenous workers from southern Mexico who do not speak English and may not speak Spanish well, reflecting the growing complexity of the hired farm work force.

The NAWS has found a more stable crop work force in recent years, one that is older, that is obtaining more days of farm work, and more inclined to remain as farm workers. The share of workers with more than 10 years of experience rose from 30% in 1999-00 to 45% of the workforce in recent years, which could reflect more difficulties finding nonfarm jobs and fewer newcomers, so that farm employers make more efforts to retain current workers.

Half of crop and nursery workers remain unauthorized, which helps to explain the keen interest of farm employers in immigration reforms that could require them to fire experienced workers. The Agricultural Jobs, Opportunity, Benefits and Security Act (AgJOBS) negotiated by worker and employee advocates in December 2000 would have repeated IRCA’s legalization and E-Z guest worker approach to farm workers with several important changes (Rural Migration News, 2009). Like the SAW program, if passed AgJOBS would have allowed currently unauthorized farm workers to legalize their status and to “earn” a regular immigrant status for themselves and their families. Those legalized under AgJOBS would have to continue to do farm work. The purpose of tying newly legalized workers to continued farm work under AgJOBS is to prevent an immediate exodus of newly legalized farm workers to nonfarm jobs.

The most recent version of AgJOBS, S 1038 and HR 2414 introduced in May 2009, would have allowed up to 1.35 million unauthorized farm workers who did at least 150 days or 863 hours of farm work in the 24-month period ending December 31, 2008 to apply for Blue Card probationary status. Blue Card holders could work and travel freely within the United States and enter and leave the United States, and could earn an immigrant status for themselves and their families by continuing to do farm work over the next three to five years. AgJOBS had three farm work options to earn citizenship: (1) performing at least 150 days (a day is at least 5.75 hours) of farm work a year during each of the first three years after enactment; (2) doing at least 100 days of farm work a year during the first five years after enactment; or (3) working at least 150 days in any three years, plus 100 days in a fourth year (for workers who do not do 150 days in the first three years) after enactment.

For six years, farm employers of Blue Card holders would have to provide Blue Card employees with written records of their farm work and submit a copy to the Department of Homeland Security or face fines of up to $1,000. After documenting their continued farm work, Blue Card holders could pay fees and fines and become immigrants, and make their family members legal immigrants at the same time.

AgJOBS would change the H-2A program in three major ways to make it easier for farmers to recruit and employ legal guest workers. First, attestation would replace certification, effectively shifting control of the border gate from the U.S. Department of Labor to employers, who would make assertions (assurances) to DOL that they have vacant jobs, are paying at least the minimum or prevailing wage, and will comply with other H-2A requirements. DOL would review employer assurances for "completeness and obvious inaccuracies" and approve them within seven days of receipt.

Second, rather than provide the free housing to H-2A and out-of-area U.S. workers that is currently required, AgJOBS would allow farm employers to pay a housing allowance of $1 to $2 an hour, depending on local costs, to rent two-bedroom units, provided state governors certified that there is sufficient rental housing for the guest workers in the area where they will be employed. Third, the Adverse Effect Wage Rate (AEWR)—the minimum wage that must be paid to legal guest workers—would be frozen at the 2008 level and studied, effectively reducing it by $1 to $2 an hour and offsetting the cost of the housing allowance.

Hiring farm workers increasingly means navigating the immigration system to check the legal status of newly hired workers and to ensure that special regulations governing guest worker recruitment and employment are followed. The share of hired workers on crop farms who are unauthorized has been about half for much of the past two decades. NAWS data suggest that this unauthorized work force is stabilizing as fewer newcomers increase average days of farm work and farm earnings. The question is whether and how these workers will be replaced by new foreign-born workers. Will they be newcomers who are unauthorized, as occurred over the past two decades; will they be legal guest workers admitted under a revised H-2A program; or will aging farm workers be replaced by machines and trade?

Martin, P, Mines, R and Diaz, A. (1985). A profile of California farmworkers. California Agriculture. May. 16-18. http://californiaagriculture.ucanr.org/landingpage.cfm?article=ca.v039n05p16&abstract=yes