Immigration and Meatpacking in the Midwest

Over the past five years, meat packing plants have been a focus of increased enforcement by federal immigration agents. Raids at these plants have resulted in the arrests of unauthorized workers and have brought renewed attention to the controversies surrounding employment practices of the meat packing and processing industry. In particular, media accounts of these events have heightened a negative image of meat packing and processing companies as users and exploiters of illegal labor and as poor corporate citizens in their communities.

The U.S. meatpacking industry has a long history of employing immigrant labor. Over a century ago, Upton Sinclair’s classic novel The Jungle depicted the life of immigrants working in the Chicago Stockyards. More recently, census data from 2010 show that roughly one-third of workers in the industry are foreign-born, although the number is likely higher since Census data under report undocumented workers. Jeffrey Passel of the Pew Hispanic Center estimated that 20 to 25% of workers in the meat packing and processing industry were undocumented migrants in 2005, although the current proportion is likely lower due to increased enforcement by U.S. Immigration and Customs Enforcement (ICE) and the recent economic recession.

The controversy surrounding meat packing’s employment of immigrant labor has been particularly acute because of the industry’s more recent expansion into the rural Midwest and South. While in Sinclair’s day meatpacking was predominately an urban industry, by 2000 more than 60% of meat packing and processing jobs were located in rural areas. Most rural areas have a lower number of foreign-born residents than urban areas, so meatpacking growth is more likely to change the demographics of their host communities. And, because meatpacking plants are atypically large relative to other rural employers, industry growth can influence the overall economy of a rural area to a much greater extent than would be seen in an urban one.

Certainly, attracting agricultural processing facilities is a logical strategy for rural communities in agriculturally dependent regions. New facilities provide expanded job opportunities, supplemental income for farm families, increased public revenues, and multiplier effects for further development in related industries. Having processing facilities nearby benefits local livestock producers by reducing transport costs and weight loss of live animals as they are transported to packing plants. Yet concerns about the potential negative impacts on the host communities seem to overshadow the more positive possibilities in many rural communities. A chief fear is that an influx of new immigrant workers will adversely impact the communities in which facilities locate.

Common perceptions have held that in-migration of immigrant workers are associated with a host of social problems, including higher levels of crime, increased welfare loads, heavier burdens on public services such as schools, health care providers and low-income housing and the inconvenience of bilingual commerce. In Fast Food Nation, Eric Schlosser paints a grim picture of the effects of a new meatpacking plant on Lexington, Nebraska:

“In 1990, IBP opened a slaughterhouse in Lexington. A year later, the town, with a population of roughly seven thousand, had the highest crime rate in the state of Nebraska. Within a decade, the number of serious crimes doubled; the number of Medicaid cases nearly doubled; Lexington became a major distribution center for illegal drugs; gang members appeared in town and committed drive-by shootings; the majority of Lexington’s white inhabitants moved elsewhere; and the proportion of Latino inhabitants increased more than tenfold, climbing to over 50 percent” (p. 165).

Media accounts and some case study research finds more or less similar effects on other rural communities(for example, see Stull, Broadway and Griffith, 1995; Stull and Broadway, 2004). However, the tendency of these descriptions to report only the most egregious cases makes it difficult to assess whether the positive or negative social and economic outcomes in one case are actually typical. 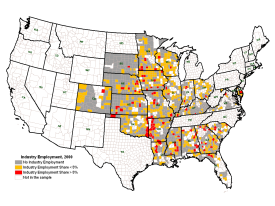 Meatpacking Industry Employment as a
Percent of Total County Employment in
Study Counties, 2000

The goal of our research on this topic has been to examine how meatpacking’s growth into rural areas has impacted the economic, social, and demographic characteristics of its host communities in a more comprehensive manner. We analyzed data for 1,404 nonmetropolitan counties in 23 Midwestern and Southern states spanning 1990-2000 to assess changes associated with the growth or decline in meatpacking industry size, controlling for confounding factors. This experiment allowed a comparison of immigrant labor use in counties with meatpacking jobs to those that do not have such jobs.

The states in our study accounted for roughly 52% of the establishments and 71% of the employment and annual payroll in the meat packing and processing industry in 2000. Roughly 40% of the counties in the study had some meatpacking jobs. Figure 1 shows the meatpacking industry’s share of total county employment in 2000. For most host counties, meat packing industry employment accounted for less than 1% of county employment; however,in some counties it ranged as high as 47%. During the 1990s the prominence of the industry in these counties increased. In 1990, the average county with meatpacking had 251 jobs. Average county-industry employment rose over the decade by about 50% to 377 employees in 2000. Industry wages in counties with meatpacking and processing firms averaged about $4.2 million in 1990 rising to an average of $6.8 million (in inflation-adjusted, 1990 dollars) by 2000.

Table 1 summarizes the main findings of this research to date. The leftmost column divides the measures which growth in the meatpacking industry was expected to impact into four categories: economic, demographic, and social indicators and public expenditures. We assessed how growth in these measures varied as the relative size of the meatpacking industry changed, controlling for confounding factors. We measured the meat packing industry’s employment as a share of total county employment. This measure allowed for the possibility that a very large plant in a sparsely populated area would be expected to have greater effects, whether positive or negative, than would a plant that represents a much smaller share of the local labor market. For each outcome, a check mark in the appropriate column—increase, decrease or no impact—denotes the direction and significance of meatpacking and processing industry growth on the measure. Note that this does not reflect whether the result is good or bad for the community. For example, we find that growth in the industry is positively related to poverty rates, meaning that as meatpacking employment rose, so did the share of residents with below-poverty level incomes. While the relationship between these two variables is positive, the outcome for the community is arguably not.

Growth in the meat packing and processing industry spurred total employment growth in its host counties during the 1990s. However, wage growth slowed relative to counties without the industry, and total income growth in the county did not changed. These findings imply that the negative wage effect roughly canceled out the positive effect of rising employment. Employment net of the meatpacking sector grew more slowly, suggesting that meatpacking and processing employment, rather than having multiplier effects, may in fact crowd out some growth in other sectors of the economy. Although not depicted in Table 1, an important finding is that the estimated magnitudes of the economic impacts were small. For example, a 1% change in a county’s share of industry employment resulted in a less than 0.4% change in total employment.

Meat packing and processing plants, especially large ones, changed the demographics of their communities. Industry plants were associated with increases in the foreign born population and Hispanic population, especially those with limited English ability. In contrast to the relatively minor changes in economic measures, in many cases the estimated demographic changes we’re very large. For example, in counties with high concentrations of industry employment—20% of total county employment or more—the increase in Hispanic population between 1990 and 2000 was 200 percentage points larger than the Hispanic population change in non host counties over the decade. These counties gained an average of 2,050 foreign born residents over the decade. A charge against meatpacking plants is that as a result of the influx of immigrants to the communities, many, if not a majority of the native—white—residents move away. However, our analysis finds no impact of the industry on native population trends at the county level.

One of the bigger worries surrounding the impacts of the meat packing and processing industry and its associated immigrant workforce is the changes it brings to local school systems. Mirroring the general population, host counties saw increasing diversity in the student population. They also experienced escalating numbers of students requiring special services. Host counties experienced faster growth in the number of migrant students, English language learners and students receiving free lunch between 1990 and 2000 when compared to counties without meatpacking jobs.

Host counties also experienced rising poverty levels associated with the presence of the industry. Despite this, we find no evidence of related fiscal impacts, such as increased per capita government expenditures on health or education. In fact, growth in the industry between 1990 and 2000 reduced per capita government spending on welfare. One plausible explanation is that the burden of providing social services to poor families may be borne by private charitable organizations such as churches, rather than local governments. However, a recent study by Osili and Xie (2009) concludes that foreign-born adults and their children are less likely to be a burden on their host communities than are native-born Americans, since they are less likely to receive benefits from nongovernment sources such as charities. Another possible explanation is that, on average, industry presence generates sufficient local public resources that it pays its own way for any associated need for public services. Consequently, our research finds that the increased presence of foreign-born and nonnative speakers in rural communities hosting meatpacking plants does not typically create an undue burden on public services.

Another major concern is that meatpacking’s immigrant workforce will lead to increased crime. Yet, we find no evidence that the industry was associated with increases in property or violent crime rates on average. Correspondingly, we do not find that host counties incurred increased expenditures on police protection or corrections.

Meatpacking’s relocation and expansion into rural regions of the United States has in fact changed the nature of its host communities and much of the change stems from the nature of the workforce the industry employs. Industry growth raises overall employment growth, which helps explain why some communities actively recruit these firms. But the addition of the industry can dramatically change the demographics of a rural town, and host communities do absorb some costs, specifically a rise in foreign-born populations with limited English skills and a rise in poverty rates. The story of meatpacking and processing’s move into rural communities has been one of trade-offs, but a key point of this research is that they are in general not as severe as media accounts and some case studies suggest.

Passel, J.S.(2006). The size and characteristics of the unauthorized migrant population in the U.S. Estimates based on the March 2005 current population survey. Pew Hispanic Center. Available online: http://www.pewhispanic.org/files/reports/61.pdf

Georgeanne M. Artz (gartz@iastate.edu) is Visiting Assistant Professor Department of Economics, Iowa State University, Ames, Iowa.
Thanks to participants who commented on an earlier version of this article at the May 2011 conference entitled "Immigration Reform: Implications for Farmers, Farm Workers, and Communities" which was funded in part by the Agriculture and Food Research Initiative of the U.S. Department of Agriculture's National Institute of Food and Agriculture, whose support is gratefully acknowledged.
The views expressed here are those of the author and may not be attributed to the National Institute of Food and Agriculture, or the U.S. Department of Agriculture.