There are many preconceived notions of beginning farmers. The main reason for the diversity of views is because they are a very diverse population—in many ways more diverse than the established farmer population. So, one’s characterization of beginning farmers depends on where the blind man has touched the elephant. There is also diversity in views because data are not frequently and widely available to characterize the population. Moreover, there may be complex relationships at work, not easily verified, about the importance of the beginning farmer population to larger issues, such as national food security. It is worth considering what can be quantified.

One common view of beginning farmers is that they are young, well-educated individuals, operating smaller farms with a positive value of farm production, perhaps with access to farmland through relatives. However, because most beginning farmers are not young (that is, under 35 years old), do not have a college education, nor have access to farmland through their relatives, and more than one-quarter have zero value of farm production, less than 1% of all beginning principal operators meet the common view as described above.

So, who are the approximately 21% of farms classified as beginning farms? As shown in Table 1, compared to established farmers, principal operators of beginning farms are indeed more likely than established farmers to be young, college-educated, women, and to be ethnically and racially diverse. However, the majority of beginning principal operators (77%) are nonHispanic white males with a median educational level of high school and a median age range of 35-54.

Getting started in most businesses requires start-up capital. Like other businesses, farming requires a variety of factors of production, such as management, labor, financial resources, and physical resources. The USDA and Land Grant system provides a wide array of planning resources to assist beginning farmers in establishing and managing their farms and there are also several nonprofit organizations that feature useful tools and links. The resources available highlight two important and related challenges faced by beginning farmers—(1) having the market opportunity to buy or rent suitable land and (2) having capital to acquire land of a large enough scale to be profitable. Given the importance of government –provided support to many farms, lack of qualification for access to the resources of these programs, especially direct payment programs, is a challenge for beginning farms.

The fact is that most farmers, whether beginning or established and regardless of farm size, are more likely to acquire land by purchasing it from a nonrelative than by any other means. Therefore, trends in the farmland market are critical to entry opportunities and the cost of farmland helps explain why beginning farmers are more likely to not own any land than established farmers. The latest USDA estimate of the price of farmland in the United States was $2,140 per acre as of January 1, 2010, but land values vary considerably by location to markets and population concentrations and agricultural productive capacity. For example, farmland in Illinois, in the heart of the productive Midwest, averaged $4,820 in 2010, compared to $779 in Montana which has large concentrations of rangeland. And, farmland in a densely populated state like New Jersey with significant development pressures was $13,300 per acre. California, the number one agricultural producing state in the United States with regions of highly productive soil and significant development pressure, had per-acre agriculture real estate value of $9,130.

The earning capacity of farmland is also tied to whether or not it has an agricultural “base” for farm payment purposes. Due to the historical program eligibility conditions, land used for cash grains, soybean, cotton, and rice are more likely to have an agricultural base than other types of farmland uses, such as vegetables, fruits, nuts, and livestock. Owning farmland with a base encourages established farmers to continue farming. The enhanced earning capacity of farmland with a base likely helps explain why beginning farmers are less likely to specialize in cash grains and oilseeds and compete for access to these acres. In addition, the farmland retirement program, the Conservation Reserve Program (CRP), encourages established farmers–many with a history of cash grain production–with an interest in retiring from farming to place their land in the CRP, rather than exiting farming and selling or renting their land to other producers. 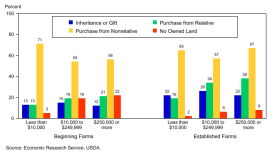 Sources of Land Acquisition for Beginning and Established Farms by Farm Size, 2009

Aside from the slight decline in 2008, farm assets, comprised mainly of farmland, have been strong during the recent recession which began in December 2007. This is in contrast to other sectors of the economy, for example, like residential housing. The strong asset values are consistent with the high returns the farm sector has experienced during the period, fueled by a variety of factors including the demand for biofuels and growth in U.S. agricultural exports. So, owners of farmland, especially during the last decade, have seen a strong increase in their wealth. While the strong returns and farmland values are good news for established farmers that own land, for beginning farmers the recent economic conditions have meant that not only is farmland relatively expensive, but it is often difficult to find any land on the market, as farmland owners are less willing to sell due to their often less than attractive investment alternatives. If a farm family was expecting to enter farming by selling an urban residence and purchasing a rural farmstead, they are likely to be challenged by a significant decrease in their home equity since 2007. 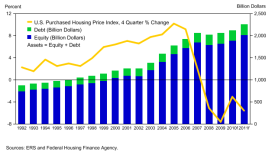 At the same time that farmland values have increased, economies of size are well-established in farming. Not only should a beginning farmer expect to have low returns in the start-up phase, but even established farms must be of a significant size before they are likely to earn positive returns. For example, in recent years, with size measured by the gross value of production classes, it is not until farms were in the range of $25,000 to $30,000 in production did the majority of farms have positive net cash returns, after depreciation. Keep in mind that this measure of returns did not account for the opportunity cost of owned factors of production, like labor, management, land, and equity. And the average farm asset base for farms of $25,000 to $30,000 value of production in 2009 was $840,000, with 84% in land and buildings.

Another insight into the financial resources required to be successful in farming, is to consider the characteristics of only beginning farms that earned positive net cash return from farming, after depreciation. In 2009, 22% of beginning farms earned a positive return after depreciation. That successful beginning farmer subpopulation earned on average $38,775 from farming, had a household off-farm income of $71,059, and a farm asset base of $607,000. The off-farm job not only provides the household with resources to cover farm and living expenses, but often times health insurance. The reliance on off-farm income is likely a factor in explaining the relatively small share of beginning farms in some sparsely populated areas of the country, like the Great Plains. 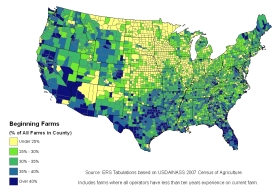 Share of Farms in a County that are Beginning Farms, 2007

In spite of these daunting financial requirements, the fact is that the number of farms increased between the 2002 and the 2007 Censuses of Agriculture with most of the increase in small farms. Many of the small farms reported entering farming in recent years and had relatively younger ages than most other farm sizes, although some were established farms and elderly. One of the factors explaining the increase in small farms is the increase in demand for farms largely as a place of residence. Small farms may lose money from their farming operation, but those net returns do not account for the in-kind income that comes from having a farm residence.

Generally, small farms, as with all sizes of farms, report their farm residence-associated expenses along with their farm business income. Farm residence expenses reported as part of business expenses are tax deductible in the calculation of taxable farm income. Farm residences are also often afforded other tax advantages, like reduced local property taxes from preferential farm rates and farm income losses that can result in reduced household income taxes than what would otherwise be owed on household off-farm income. The dual role of the farmstead as the farm residence helps explain why more than three-quarters of beginning farmers in 2009 did not earn a positive return from farming.

It is reasonable to ask, why do we care about beginning farms? Aren’t the markets working? Or, perhaps we should be concerned that the markets are distorted through government programs which favor current farmland owners, such as through direct payment programs and tax policies–such as estate tax policies and IRS Section 1031 land exchanges? Agriculture is still a textbook case of a competitive market on the supply side. What is the downside to the country if there is a decrease in beginning farmers? There are no easy answers to these questions. Based on policies, programs, and statements, various policy makers have revealed that they believe it matters to the country’s national security and rural areas how many beginning farmers there are and how well they are prospering. Concerns are often expressed by referring to the advancing age structure of established farmers. Currently, 30% of principal operators of farms are 65 years old or more. The most recent Farm Bill, 2008, extended programs for beginning farmers that were first introduced with the 1992 legislation. In 1992, the focus was on loans. In 2008, special provisions for beginning farmers were included in 8 titles, including loans, commodity payments, conservation payments, and training programs as policy makers strive to develop the “right” mix of programs to achieve their desired policy goals.

The importance of beginning farmers has been tied to important policy priorities, such as the growth in local foods, in USDA known as the Know Your Farmer, Know Your Food initiative. USDA’s Agricultural Marketing Service reports that as of mid-2010, there were 6,132 farmers markets operating throughout the United States. This is a 16% increase from 2009. Some have observed that a large share of both the farmers and the shoppers, are more likely to be young compared to their counterparts. USDA’s Agricultural and Resource Management Survey, based on a representative sample of farms, does not show a much higher share of beginning farms engaged in local foods or agritourism than established farms. On the other hand, small farms, whether beginning or established, are more likely to be involved in local foods and agritourism than larger farms. Development of these local niches may prove to be an avenue to entry and sustainability for beginning farmers.

Some policy makers have expressed the hope that beginning farmers will play a catalytic role in fostering rural development. For example, in his June 30, 2010 testimony before the Senate Committee on Agriculture, Nutrition, and Forestry, USDA Secretary Vilsack asked the Committee to consider an idea to increase the number of farms by 100,000. While that number may not be a hard target, it is intended to be a signal that he views the rather low entry rate of young and beginning farmers into U.S. agriculture as a general concern and, perhaps, an increase in beginning farmers in some areas could foster rural development. For example, can beginning farmers make a contribution to halting the long-term population losses in parts of our rural areas, such as the Great Plains? Most of the nonmetro counties classified by the Economic Research Service as depending on agriculture–based on income or employment from production agriculture–are in the Great Plains. However, only a small share of beginning farms are in farm-dependent counties. In contrast, a disproportionately large share of beginning farmers is in the South in nonfarm-dependent counties. Questions about the importance of beginning farmers to larger issues such as long-term food security, rural development, and the production of local and specialized foods remain to be addressed.

The views expressed here are those of the author and may not be attributed to the Economic Research Service or the US Department of Agriculture.