Coverage maps provided by federal and state sources—particularly those based on data provided by carriers—often provide an unrealistic and optimistic perspective of actual high speed (25/3 Mbps [megabits per second] download/upload) broadband availability in the real world.1 Frustration with the failure of actual, experienced access to meet stated coverage standards led to a ground-truthing effort that involved collecting better local coverage data to inform policy decisions. Validated local data in this case resulted in different priorities and allowed policy makers to better address actual needs. We describe the collection process and uses made of data from local user surveys of residents in rural areas of Washington to examine how the actual experience of users of high-speed broadband differs from publicly available coverage maps. Second, we address whether the availability of better data will lead to different policy decisions regarding access. Finally, we assess what data collection approaches best support development of validated broadband availability maps.

Facilitated by WSU Extension, members of the Stevens County/Spokane Tribe Broadband Action Team (BAT) in Washington State set out to better understand the differences between what they were hearing from community members about broadband access and what was being reported by commercial providers. This BAT is the first BAT organized in Washington and includes over 45 members representing many organizations, agencies, concerned citizens, and elected officials working to improve internet access and use in this rural area of Washington. Members of the BAT were aware that many rural parts of Stevens County and the Spokane Indian Reservation did not have adequate internet service and that published data and maps about internet availability were not accurate. Accurate broadband mapping is critically important to residents, businesses, and communities to document where robust broadband is unavailable. It was clear to BAT members that the then-current national broadband map was telling the wrong story and did not match actual Stevens County broadband availability. What was needed was documentation of this disconnect in order to inform policy and improve availability. According to the Federal Communications Commission (FCC) data available at the time, Stevens County was considered 100% covered AND at speeds that our research indicated were only available in limited areas. Further investigation led to these discoveries:

To help secure additional information about internet access and use, the WSU Extension-led Stevens County BAT conducted a community broadband survey between January 7 and February 15, 2019, that was made available both online and in hard copy form. Libraries and tribal offices provided hard copies of the survey which when completed were returned and input into data files by WSU Extension staff. During the survey timeframe, 505 responses were received, with 28 additional online surveys submitted in late February for a total of 533 responses. The survey was designed to determine which internet services were available in the community; document the actual experience of home internet availability; and explore how services were or might be used, whether there was interest in additional internet services, and the barriers to obtaining adequate service. The community survey was promoted through news releases, a radio interview, Facebook posts, posters, word of mouth, and email distribution lists from members of the Stevens County/Spokane Tribe Broadband Action Team, including WSU Stevens County Extension. The survey responses do not represent a statistically valid sample of the population and results cannot therefore be generalized, but they provide an informative snapshot of the circumstances regarding internet availability and use for residents in the county who responded to the survey. The survey response population is, however, broadly representative of the demographics of the county as a whole, with about 78.2% of respondents indicating their race category as White. About 13.4% of those responding indicated their race as Native American—a key element of the population, and typically underserved.

Figure 1a. Download and Upload Speeds - FCC Definition
and as Reported via Surveys 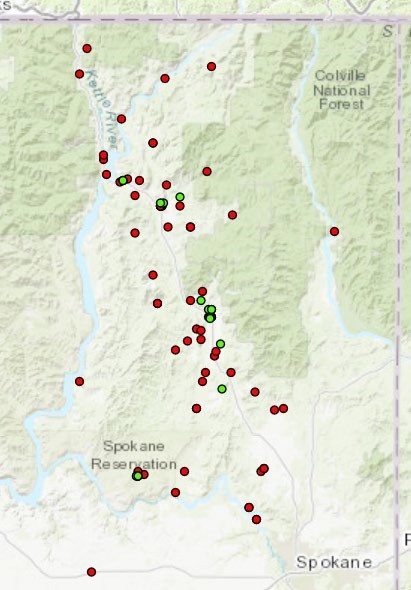 Note: For Figure 1b, red indicates download speeds of <25 Mbps
and green indicates speeds of >25 Mbps. 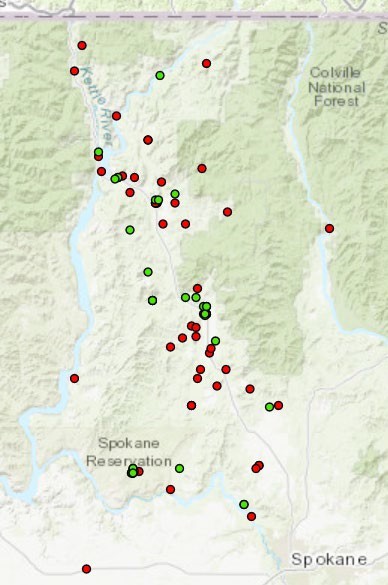 Figure 3. Types of Assistance Survey
Respondents are Willing to Support 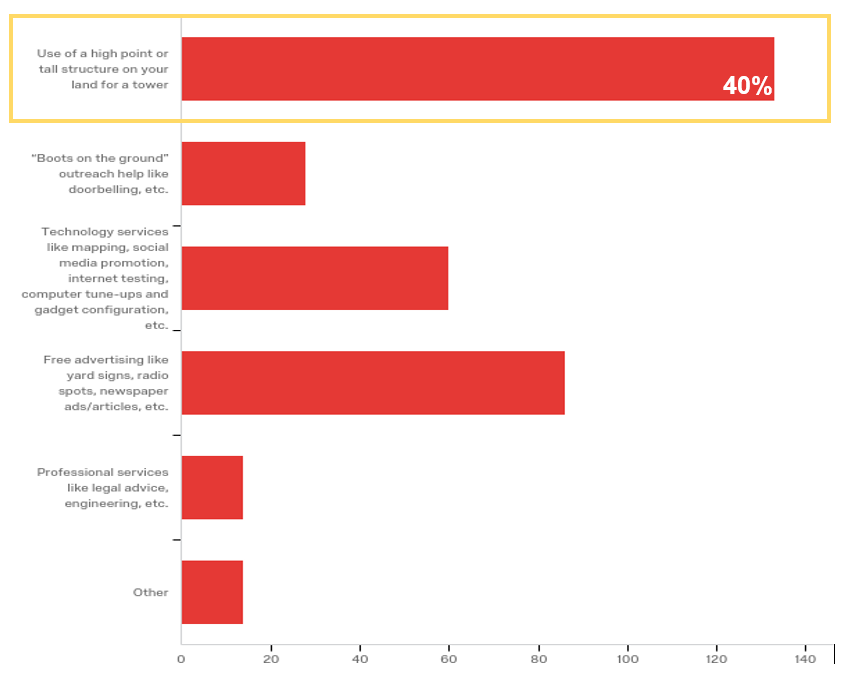 WSU researchers worked in partnership with Measurements Lab (M-Lab), to make available a platform to allow individuals to test Stevens County and Spokane Reservation internet speeds. Survey respondents were asked to complete an online broadband speed test. The website link provided by M-Lab for use during this project allowed us to collect data on 590 speed tests. As Figures 1a, b, and c indicate below, based on the FCC definition of minimum broadband download and upload speeds (25 Mbps download/3 Mbps upload), 83% of respondents were below the minimum for download and 66% were below the minimum for upload target speeds.

The first question asked survey respondents how much they were currently paying for internet services, both bundled and standalone. The overwhelming majority of responders indicated that their monthly cost was over $100. The next most frequent responses to this question were $70–$79 and $50–$59 per month. The most frequent response to a question about the most they would be willing to pay for internet access was $50–$59 per month, followed closely by $70–$79 per month, indicating that the $100 cost being paid by many is likely well above their preferred rate and likely above what they can reasonably afford. The next question asked respondents about their level of satisfaction with aspects of their internet service. The responses, as displayed in Figure 2 below, indicate high dissatisfaction with price, reliability, speed (highest dissatisfaction), data cap limits, and overall satisfaction. Respondents reported moderate satisfaction with customer service and technical support.

How Satisfied or Dissatisfied Are You with the Following Aspects of Your Internet Service?

When asked how internet services benefit, or would benefit, respondents in their home, survey participants reported current use of their internet for email, access to health care, social media, and passing time.  If those responses are overlapped with the need for better speed and reliability, responses indicate that they would use internet services for those purposes and for video conferencing, distance learning, and homework. Asked why they do not have internet service in their home, 39% of respondents reported that it was not available in their area. The second most common response (31%) was that available internet services were too expensive . When asked whether they would be interested in contributing to broadband expansion in their area, 121 (just under 30%) responded with “yes” and provided their contact information, which indicates interest and willingness to participate in a solution for this region. Figure 3 below provides percentage response and the types of assistance that survey respondents indicated they would be willing to support, with 40% indicating that they would be willing to allow use of a high point or tall structure on their property for a cell tower.

The survey also provided an opportunity for participants to provide additional comments or suggestions:

We are two retired people in our late 60s. We perceive that we are being left behind in the world that is more and more dependent on information being available quickly and the technology that makes it possible. Ironically– and potentially tragically – since we live in a remote area, sources of information relevant to our safety and wellbeing such as status of weather, fire danger, road conditions, emergencies are all but unavailable with only a dialup connection.

I can’t tell you how many times I haven’t been able to do important things like online banking, update my business website, the kids can’t do research for homework because of data caps and/or weather disrupting service. It’s very frustrating.

I have had teachers tell me they don’t believe me when I tell them I do not have internet, or that my internet is so bad that I cannot turn in assignments. It makes me very happy to see a survey being put into the community to try to accommodate for the people who live in areas that are not technologically provided for due to their location.

Following the release of preliminary data from this study, the 2019 Washington Legislature passed Second Substitute Senate Bill 5511, which was signed and codified as RCW 43.330.536. That legislation established target broadband speeds for the state, increasing over time, and established the Washington State Broadband Office under the Department of Commerce. That new office has since adopted a “State Broadband Access and Speed Survey” (https://www.commerce.wa.gov/building-infrastructure/washington-statewide-broadband-act/) and has partnered with WSU Extension to dramatically expand the number of Broadband Action Teams across the state using the Stevens County model developed by WSU. There are currently 30 BATs formed in Washington. That office also partnered with WSU Extension early in the COVID-19 pandemic to enlist partners and establish a broad network of “Drive-up Wi-Fi Hotspot” sites across the state to provide access to those in need. Building on that initial student-focused WSU effort, that state effort currently lists several hundred sites. (https://www.commerce.wa.gov/building-infrastructure/washington-state-drive-in-wifi-hotspots-location-finder/)

The FCC has improved how it acquires data related to speeds on mobile devices but still relies on internet service providers for data on fixed internet speeds. These data on broadband accessibility provided to the FCC by the largest internet service providers is inconsistent—largely because of collection and reporting protocols—with what those who use the service report about how well those services are working for them. With so many students and employees needing to study or work from home, the COVID pandemic shone a light on the challenges presented by no or inadequate broadband access. The FCC has recently implemented programs to help fix the recognized broadband access problems across the country. The State of Washington has implemented a direct assessment model through the Washington State Broadband Office that generates “ground-truthed” access data. Ground-truthed data on actual high-speed access availability, such as described here, can make a positive contribution to identifying and effective targeting of critical access needs.