Waste Not Want Not: Examining Plate Waste of Vegetables in Elementary School Lunches

Total loss and waste of food produced in the United States may be as high as 40% and cost $218 billion a year (Gunders et al., 2017; ReFED, 2016). In addition to food wasted by households at home, institutions such as universities, schools, hotels, healthcare facilities, and other locations with cafeterias and catering contribute to total food waste. On January 26, 2012, the Food and Nutrition Service (FNS) of the U.S. Department of Agriculture (USDA) issued final regulations to align the School Breakfast Program (SBP) and National School Lunch Program (NSLP) with the most recent Dietary Guidelines for Americans (U.S. Department of Agriculture, 2012). The proposed school meal regulations originally included a limitation on starchy vegetables, but this limitation was later removed. Nevertheless, the proposal to limit starchy vegetables in school meals raised questions concerning vegetable intake or plate waste as well as costs and nutritional values of school meals. Despite the elimination of this proposal by FNS, questions dealing with the ramifications of plate waste in general remain largely unanswered.

To keep research costs manageable, we focus on three elementary schools in Bryan, Texas, hereafter referred to as Independent School District 1 (ISD 1) and three elementary schools in Dallas, Texas, hereafter referred to as Independent School District 2 (ISD 2). As such, this work essentially constitutes a pilot study. The respective schools in each district were matched based on the percentage of students receiving free or reduced-price school meals and comparable numbers of student enrollment. Besides geographic location, the sociodemographic composition of the students from these school districts was not the same. On the basis of ethnicity, the students were predominantly white, black, and Hispanic in each school district. Students of Asian and Native American descent represented very small percentages of the populations in the respective school districts.

Buzby and Guthrie (2002) estimated that costs of food waste annually at elementary schools were on the order of $600 million. However, these analysts only had access to aggregate school meal costs and consequently were unable to examine costs of food waste specific to vegetables. Cohen et al. (2013) examined nutrient losses and economic costs associated with school meal waste among middle school students (grades 6–8) in Boston public schools in 2010–2011, estimating the average cost per vegetable item to be $0.21, the average percentage waste for vegetables to be 73%, and the average waste cost per student for vegetables to be $0.09. Our research permits this examination for various types of vegetables for elementary schools in two distinct independent school districts in Texas.

A registered dietitian selected the vegetables to ensure variety. However, the list of vegetables was restricted to the school lunch calendar and menu cycle. All school principals, teachers, and food service and custodial staff were notified of the study objectives, the dates of collection, and the plate waste study protocol. Teachers explained the protocol to their students before lunch on days of collection and instructed students that they were not obligated to participate. Study participants were kindergarten through fifth grade students who selected at least one vegetable as part of the NSLP. Lunch periods were scheduled by grade (K–5), and 30 minutes were allocated for lunch. Menu items and serving sizes were consistent throughout all lunch periods. Each school had complete control over when and what students were served; the research team had no control over menus or any competitive foods offered before or during the lunch periods.

Accurate measurement of school children’s food consumption and waste is challenging. Though labor intensive and time-consuming compared to other research protocols, we utilized a comparison of pre- and post-consumption plate weights as a basis for plate waste estimation. The study design was modeled after the aggregate plate waste method of Chu et al. (2001) and Cohen et al. (2013). For each data collection day, five to ten servings of each sampled vegetable were obtained on “test trays,” which were used to gather preweights for each vegetable item in which plate waste was collected to obtain an average weight in grams (g). The key measure was the percentage of plate waste of the respective vegetable items. To arrive at this measure, the total amount of plate waste was obtained and this total was divided by the number of children who chose the vegetable in question. The ratio provided the plate waste per child. Finally, the percentage of plate waste was calculated by dividing this ratio by the preweight of the vegetable item, also measured in grams. Hence, plate waste was measured on a standardized basis (percentage).

Research assistants affixed coded data tags to eligible student lunch trays after the selection of vegetables in the cafeteria line. Lunch trays were included in the study if the student (i) participated in the NSLP on the day of the data collection; (ii) chose at least one vegetable serving that was sampled on the day of collection; and (iii) returned their tray with the data collection tag to a field worker after the lunch period. In each school district, roughly one of every two school lunches served was sampled.

Data tags identified the vegetables selected as well as student gender and grade. Students received a small incentive—such as a sticker, pencil, or eraser—if their tray and data tag were returned after the lunch period. Plate waste stations were located in the cafeteria to collect the sampled vegetables. Plate waste was collected from each eligible tray, while all other tray contents were discarded. The method was repeated for each lunch period to determine plate waste differences by grade and lunch period. Three trial runs were conducted to familiarize each research assistant with the movement of students through the cafeteria and the mechanics of labeling trays, obtaining samples, and collecting and weighing plate waste.

All plate waste was separated in a labeled and dedicated trash container lined with a plastic bag for each specific item at each given lunch period. Aggregated plate waste for each item was recorded and divided by the number of children that selected the item. In addition, the waste was segregated according to grade level within each of the participating schools. In sum, aggregate plate waste was measured for each vegetable by elementary school and by grade level using a Denver Instrument food balance with maximum capacity of 5,000 g. Percentage plate waste was calculated as follows:

The respective vegetables in school lunches fell into seven categories:

Table 1. Mean/Median Plate Waste for all Vegetables and
by Vegetable Subgroup by ISD 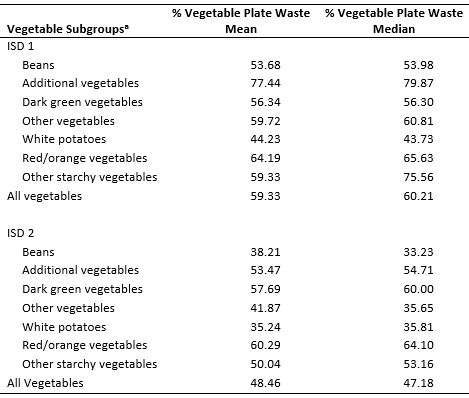 Table 2. Costs of Waste for Vegetables by Subgroup and by ISD

Our findings are limited to the six schools from the two independent Texas school districts that participated in the study; therefore, the results may not apply to other regions of the state or other regions of the country. We did not control food menu decisions or vegetable selection, and we did not influence the vegetable choices of children participating on collection days. The schools had control over the menus and foods served as well as any competitive foods served. Purchase of à la carte foods such as ice cream and popsicles may have reduced hunger, leading to decreased consumption of vegetables, especially among older children.

The information gleaned from our study is useful to policy makers, food service professionals, and perhaps other federal, state, or local program staff in addressing the overarching question of how to encourage children who attend elementary schools to eat more diverse and nutritionally beneficial vegetables, while still staying within a reasonable budget. In any research scenario, where it is found that food items are being wasted, particularly those designated as healthy, strategies must be developed and implemented to increase consumption. These strategies could include conducting taste tests, providing nutrition education, and implementing health promotion interventions. Alternatively, the availability of “offer versus serve” (OVS) in school cafeterias makes it possible for schools to save on the preparation of various vegetables. When the OVS policy is in place, students are only required to take a fruit or a vegetable.

The results from this research suggest that plate waste of vegetables differs due to geographic location and diversity of sociodemographic composition of student populations. Importantly, our research efforts have the potential not only to be conducted on a larger scale but also to be implemented at relatively low cost. In essence, this work served as a pilot study. Future research should center on replicating this project in other areas of Texas and elsewhere around the country. In addition, research centered on establishing factors linked to vegetable plate waste as well as the financial and nutritional implications associated with plate waste is needed.

ReFED. 2016. A Roadmap to Reduce US Food Waste by 20 Percent. Available online: www.refed.com.