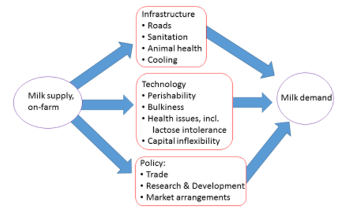 Trade in the market for cow’s milk has always been severely constrained by our understanding of the underlying biology needed to create and protect dairy products, by demand limitations related to tolerance and health implications, and by the state of economic infrastructure. Being close to a complete food, the potential demand for dairy produce has never been in question. As ruminants make good use of land unsuitable for cultivation and as, in any case, humans had learned to husband ruminants for meat production, bovine milk has never been limited in availability. Throughout history, as indeed today, the question has always been in bringing potential supply to potential demand. The primary product’s perishability and bulk has required that produce be either consumed or transformed immediately, and so locally. Production and transformation require long-term capital investments that leave investors vulnerable to both market vagaries and counterparties during bargaining. The story of dairying, therefore, has revolved around innovations in science and in pertinent economic infrastructure as well as formal arrangements to protect against market and bargaining situations. Figure 1 illustrates this connection, in which many of the impediments to dairy expansion have arisen at the interface between supply and demand. Topical market and policy issues have through time generally reflected the importance of the interface. This is as true today as it was a century ago.

The themes addressed in these papers are topical. The U.S. dairy industry has recently attracted national attention. The country as a whole lost over 10,000 licensed dairy farms in 2017. It is common to read news of dairy farms having to sell their milk cows and dealing with the consequences of losing their livelihood and tradition of lifestyle. In the recent much-publicized renegotiation of the NAFTA trade agreement with Canada and Mexico, President Trump called dairy “a deal breaker.” The newly re-drafted NAFTA (renamed USMCA) will, if approved by Congress, allow the American dairy industry somewhat easier access to the Canadian market. As with the sorts of problems regarding U.S. milk marketing arrangements that several of the papers in this theme discuss, the devil is in the details. It pertained to interactions between regulations and a technologically advanced product form, namely ultrafilter separation, which can reduce milk transportation and storage costs while enhancing processability and better meeting consumers’ taste preferences. 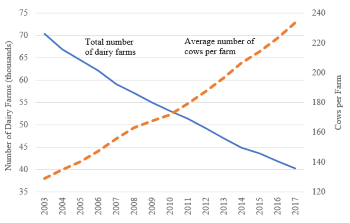 Source: The National Agricultural Statistics Service of the
U.S. Department of Agriculture:
https://www.nass.usda.gov/Quick_Stats/index.php.

However, a quick look at the dairy industry’s evolution in recent years suggests that this hard-fought deal is unlikely to have a major impact on the difficult situations that many farmers currently face, which are merely manifestations of some long-running and continuous changes in the dairy industry. Over the past few decades, the dairy industry has consolidated, resulting in many fewer dairy farms and many more large farms, declining from nearly 650 thousand in 1970 to just over 40 thousand dairy farms in 2017 (see Figure 2 for recent trend). The median farm size increased nine-fold, from less than 100 cows per farm in the 1980s to about 900 per farm in 2012 according to the most recent available data (MacDonald, Cessna, and Mosheim, 2016).

While both butter and cheese can be made on-farm, centralized transformation has long been preferred to take advantage of scale and specialized knowledge. Since the early nineteenth century, innovations in transportation, storage, and refrigeration technologies (Goodwin, Grennes, and Craig, 2002) have allowed for exploitation of regional comparative advantage in supply and more efficient use of processing capital. The nineteenth and twentieth centuries also saw innovations in microbiology and chemistry, first to improve sanitation and later to enable the breakout of craft dairy products—such as yogurt and sour cream—to large-scale retail product and ingredients markets. The industry’s growth then involved deepening capital investments and deepening economic dependencies between producers and processors.

Capital issues have always proven to be important in dairying as herd, building and equipment investments, together with start-up and exit costs, create inelastic supply responses to price declines (Halvorson 1955) and so a disposition toward supply gluts. Other capital investment issues are off-farm. Dependence on off-farm processing capacity as well as on local infrastructure to access this capacity and to bring transformed product to market have created needs for collective action on the part of dairy farmers. Although United States dairy production locations have shifted geographically, dairy farming in the United States remains clustered near processing capacity. Coordination and orderly marketing then become a concern because of dependencies and distrust between farmers and processors, whose interests may be aligned on developing a region’s dairy sector but adversarial on the division of surplus. Further needs for collective action and regulatory involvement have surrounded quality measurement and sanitation issues (Olmstead and Rhode 2015). Since the 1930s dairy marketing has been under federal regulations for a variety of reasons to do with perishability, transportation costs, inelastic short run supply and price discrimination opportunities among milk uses.

In one way or another, the papers in this theme address capital investments and their consequences. Feng and coauthors survey Great Lakes dairy farmers about changes in herd size, capital investment, and labor input over the last few years and their future intentions in these regards. Their findings reveal that investments emphasize the replacement of labor; herd consolidation is likely to continue, with larger herds generally at the forefront; and smaller farmers in particular are pessimistic about the sector’s market conditions. Because installed assets have few alternative uses, low prices are likely to persist when expansion depresses prices. This begs questions about coping strategies to survive until profitable conditions return.

Using a 10-year panel dataset of Minnesota dairy farmers, Mahnken and Hadrich address how individual farmers can cope with tight dairy margins through alternative income-management strategies intended to stabilize enterprise profits. These strategies vary from income diversification through the feed make-or-buy decision, insurance choices, and government support programs. Their research and the data-collection system that supports it point to the merits of a two-way, data-driven extension programs.

Stephenson and Nicholson consider whether, in light of transportation costs, current U.S. dairy industry production and processing investments are in the right places. Their spatially disaggregated optimization model accounts for transportation costs for milk assembly and product distribution. Their work confirms the economic fundamentals underlying the plight of milk producers in the Great Lakes region and of Michigan in particular. Although the area is well suited to milk production, transportation cost considerations require that this product be processed locally, and processors had until 2018 been reluctant to step forward.

In their inquiry into the plumbing and recent performance of milk marketing orders, Novakovic and Wolf explore why milk marketing orders in some parts of the country may exacerbate rather than mitigate market imbalances and may act as a deterrent to processing investments. Put simply, institutional processing cost parameters used in price formula calculations may be too high. Cooperatives that are committed to market all milk offered can only cover costs by reclassifying milk in a way that depresses prices paid and generates unused milk.

California’s milk sector, which had its own regulated marketing order arrangements, has performed anemically for a decade, long before the 2014–2015 price downturn, in part because of rising production costs and in part because of adjustment elsewhere toward more competitive production structures. California has now entered the federal marketing order system. Sumner discusses the events leading up to this transition and analyzes the implications for California’s milk sector. Impacts may be many given the differentiated nature of dairy product markets and detailed nature of marketing order features. These impacts may be positive for some, but they will not be large, because they do not alter the fundamentals of product supply and demand.

Where then will the future take the dairy sector structure? The crux of structural change is that a sector’s prospects are not strongly tied to those of its participants. Hard science is likely remain in the driver’s seat, with economic considerations defining the terrain and policy interventions seeking to level the bumps. Change will continue and it may continue to be wrenching, favoring consumers on the whole and some producers. This Choices theme deals with all of the above, although with emphasis on producers. But other forces, new and old, are coalescing. Butter substitutes consumed much political oxygen in the United States for decades, and milk substitutes are doing so now. The presence of substitutes will largely impact markets and production structure through overall pricing pressure. A second set of forces—having to do with such process attributes as animal welfare, organic traits, and One Health connections—may emerge to have more direct and more varied impacts on dairy markets and production structure.