The Use of Crop Insurance in Specialty Crop Agriculture

The federal crop insurance program has been the focus of increased attention following its enhanced role in the farm safety net resulting from the 2014 Farm Bill (Zuluf and Orden, 2014).   Most often that attention has been directed at coverage for crops associated with traditional federal farm support programs, such as corn, wheat and soybeans (Babcock, 2016).  However, as some researchers have pointed out, crop insurance is also a risk management tool for U.S. specialty crop producers, such as, fruit, vegetables, tree nuts (Coble, 2016).  According to the most recent U.S. Department of Agriculture, Risk Management Agency (USDA-RMA) report around 73% of the acres devoted to specialty crop production have been covered by federal crop insurance programs (Figure 1) (FCIC, 2015). 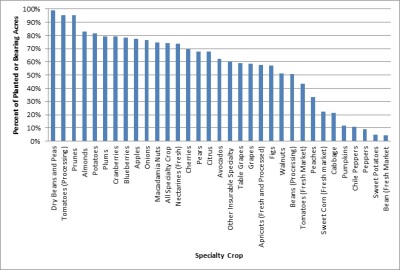 Efforts by USDA-RMA to develop risk management programs for specialty crops were encouraged by the Federal Crop Insurance Reform and Department of Agriculture Reorganization Act of 1994. During the period 1995 to 2003 USDA-RMA had policies in place that covered 32 specialty crops with active pilot programs for an additional 30 crops (USDA- RMA, 2004). In their latest Specialty Crop Report to Congress, the USDA provides a list of 38 specialty crops that are currently covered by federal crop insurance plans (FCIC 2015).

The 2014 Farm Bill continued the move toward enhancement of specialty crop insurance coverage. One example was the call for the development of a whole farm revenue protection policy tailored to specialty crop producers.

What Crops are Specialty Crops?

When the USDA initially reported on the progress of crop insurance for specialty crops, it used the definition of specialty crops provided in the Agricultural Economic Assistance Act of 2001: “any agricultural crop, except wheat, feed grains, oilseeds, cotton, rice, peanuts, and tobacco”, essentially defining what they were not. The Specialty Crops Competitive Act of 2004 refined the definition of specialty crops as “fruits, vegetables, tree nuts, dried fruits, and nursery crops (including floriculture)”. The Food, Conservation, and Energy Act of 2008 further refined the definition and is the one currently used by USDA: “fruits, vegetables, tree nuts, dried fruits, horticulture, and nursery crops (including floriculture)”. The specialty crop category is relatively comprehensive, the Agricultural Marketing Service (AMS) maintains a list of over 300 commodities including 46 fruits and tree nuts, 49 vegetables, 109 culinary and medicinal herbs and 117 floriculture and nursery crops.  Currently, the National Agricultural Statistical Service (USDA-NASS) reports acreage for 38 specialty crops.  In their most recent report, RMA reported 7.7 million of the USDA-NASS estimated total of 10.7 million acres were enrolled in crop insurance.

The commercial production of one or more specialty crops takes place in every state in the United States (Figures 2 and 3; Johnson, 2014). However, the majority of production is concentrated in three coastal states, and the distribution varies according to commodity. California is the top value producer for vegetables and melons, at 44%, followed by Florida with 6.8% and Washington with 6.4% of production in 2014.  By value California accounted for 71% of U.S. fruit and tree nut production in 2014, followed by Washington at 10.5% and Florida with 6.4%. In addition, Oregon, North Dakota, and Michigan play an important role in the production of certain specialty crops (FCIC 2015).

In 2000, it was around $7 billion and by 2014 total liability was close to $15 billion. It was a relatively small—but important—portion, about 13.6%, of the overall crop insurance total liability of $109.9 billion in 2014. The growth in the liability associated with specialty crop insurance is due to the increase in value and expansion of the fruit, vegetable, and tree nut commodity coverage. Increase in the value of tree nuts and the addition of coverage for pistachios increased the liability for tree nuts from around $500 million in 2000 to $3.1 billion in 2014.  The expansion of coverage to include an addition of 13 commodities also contributed $521 million to total liability in 2014. 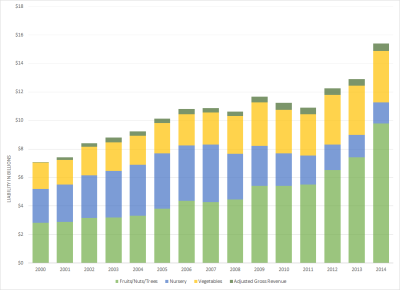 USDA reports that the vast majority, 87%, of specialty crop insurance coverage is for fruits, nuts, and vegetables. However, crop insurance also plays an important role for the nursery industry. In large part because the demand for nursery products is linked to the housing market, the nursery industry decreased over the past few years as the housing industry cooled due to the Great Recession. The USDA reported liability for nursery coverage was about $1.6 billion in 2014. The small amount relative to the total value of nursery production eligible for coverage—$15.7 billion or about 10%—results from a majority of policies being at catastrophic level coverage of 50% yield protection at 55% of the price. Accordingly, about 27.5% of the value of the crop for which coverage is currently available is insured, around $4.3 billion (FCIC, 2015).

Unlike the nursery sector, other specialty crop producers make use of additional coverage options available among insurance products to help manage risk. Estimates from the RMA Summary of Business indicate that the majority of other specialty crop producers purchase some form of buy-up coverage above the catastrophic level of 50%. As a percent of premiums paid, those purchasing buy-up coverage exceed 80% for fruits, nuts, vegetables, and melons. In terms of acres enrolled, around 60% of the fruits and nuts plans purchased had additional levels of coverage compared to over 80% of the plans purchased for vegetables and melons.

In addition to individual specialty crop insurance coverage, growers have participated in the Adjusted Gross Revenue (AGR) insurance plan. The AGR plan provided protection against a fall in revenue and covers income from agricultural commodities, animal products, animals, and aquaculture species reared in a controlled environment (USDA-RMA 2014). As described by the USDA, the AGR uses documentation of participants from historical Internal Revenue Service Schedule F or equivalent forms and an annual farm report to establish a base; provides insurance for multiple agricultural commodities in one product; and establishes revenue as a common denominator for the production of all agricultural commodities. The level of participation has been lower than that of other plans, with under $400 million in liability reported for 2014. For purposes of illustration all AGR plan liabilities are attributed here to specialty crops.

What does the Future Hold?

In accordance with the 2014 Farm Bill, the AGR program was converted to the Whole Farm Revenue Protection (WFRP) plan for the 2015 crop and a pilot program was introduced for a majority of the counties in the United States. Starting in 2016, the WFRP will be available for all counties in the country. The program was specifically designed to assist producers with diversified operations and provides a wide variety of coverage levels.  It is expected to expand the options of the risk management insurance program to those farms whose revenue derives from the sale of organically produced commodities, and/or those marketing to local, regional, farm-identity preserved, or directly to consumers.

All signs point to USDA moving forward with its efforts to expand the role of crop insurance as a risk management tool for specialty crop producers. However, it is important to understand that the pace of progress will be tempered by a number of headwinds. For example, in its most recent report to Congress, USDA noted that some growers have expressed concerns, and requested that crop insurance programs not be developed for their specialty crop. This request is driven, in part, by fears that the introduction of crop insurance could provide the incentive for rapid expansion of specific crops acreage, potentially disrupting markets and driving down prices (FCIC, 2015).  Others have commented on technical difficulties associated with developing new insurance products for specialty crops such as price discovery, non-weather risks and premium rating (Collins, 2012).

The future will also require the crop insurance program to address longer term issues related to increased weather variability and global warming. The concentration of specialty crop production is in the western United States in areas where water availability and water quality are being challenged. Changing weather patterns such as more frequent and longer drought conditions and increasing temperatures affects the mix of specialty crop production and the risk associate with crop yields. The development of irrigated agriculture infrastructure and the ability to manage watering schedules contributed to the expansion of specialty crop production in areas like the California San Joaquin Valley. At the same time the production system dependence on surface water delivery makes it vulnerable when those supplies are curtailed and fragile ground water sources are subject to depletion. In addition, many specialty crops are dependent on chilling temperatures in certain stages of development. Increasing temperatures, limiting the number of chill days coupled with limited water availability can have dire consequences for crop yields.

Crop insurance plays a valuable role for specialty crop producers in managing risk. There is increasing focus on improving U.S. consumers’ dietary habits by promoting increased consumption of fruits, vegetables, and tree nuts. Providing the producers who supply U.S. specialty crops with a risk management safety net will likely continue to be a farm policy priority. There have been substantial improvements in the coverage levels and products available in recent years. Additional progress will likely depend on the decisions of policy makers in the future as they struggle to allocate increasingly scarce budgetary resources.