Over much of the United States, agricultural farmland prices have increased dramatically since 2005. Between 2005 and 2010, annual cropland price increases in the lower 48 states averaged 5.6% (U.S.D.A. 2009, 2010). Higher rates occurred in the Corn Belt, where returns are more directly impacted by ethanol use. For example, both Iowa and Illinois cropland values increased 8.2% annually between 2005 and 2010 (U.S.D.A. 2009, 2010). More recent observations suggest farmland growth rates have accelerated. An Iowa State survey found increases of 10% from 2009 to 2010 in many counties (Duffy, 2010). The Illinois Society of Farm Managers and Rural Appraisers collected sales data on Illinois farmland and found that prices increased approximately 15% from the beginning to end of 2010.

Sharply increasing prices lead to concerns of a repeat of the experiences of the 1980s, where a rapid price increase was followed by the sharpest price decline in modern history. Sheila Bair, Chairperson of the Federal Deposit Insurance Corporation (FDIC), indicated that signs of instability exist in the farmland market similar to those that occurred before prices declined in the housing and stock markets (Gillam,2010) and used the term “bubble” in her comments, setting off a chain of related investigations by farm lenders and policymakers. In March 2011, FDIC held a conference entitled “Don’t Bet the Farm: Assessing the Boom in U.S. Farmland”, at which the general impression was that a classic bubble is not imminent, but that significant concerns about valuation revisions exist. Noted economist Robert Shiller, recently indicated that farmland is his dark horse candidate for a bubble, again fanning the flames in the popular press over the possibility of a farmland price crash.

Is farmland at risk for a rapid and substantial price decline? Here we argue that the answer depends primarily on two factors. The first is the extent to which commodity prices have reached new, sustainably higher levels. Factors contributing to recent higher prices have been increased use of corn in producing ethanol and growing demands for meat and grains in developing countries. The second factor is whether historically low capitalization rates continue into the future. Currently, interest rates are at low levels, and returns on competing assets are viewed as low by historic standards. The resulting lower capitalization rates translate to higher farmland prices. However, if interest rates increase, downward pressure would be expected on farmland prices.

These factors are more fully discussed after describing the determinants of farmland prices. Then we examine the impacts that rising commodity prices have on farmland returns and prices, followed by an analysis of the impact of interest rates on farmland prices. Examples related to Illinois farmland are presented. While the examples are specific to Illinois, results of this analysis are generally applicable to the greater corn-belt.

The general consensus of agricultural economists is that farmland prices equal their discounted future returns. Present value models based on this principle can be fairly simple including only the level of current farmland returns, an expected growth rate in returns, and a discount factor (see, for example, Melichar, 1979). Other models segregate return factors among transaction costs, capital gains rates, property taxes, and income tax rates (Lee and Rask, 1979), or account for spatial relationships to nonincome benefits of ownership (Huang, et.al, 2006). Whether simple or complex, the basics are the same: farmland price equals its discounted future returns. Increases in farmland returns or growth rates in farmland returns will increase farmland prices. Decreases in the discount factor, usually represented by interest rates, result in increases in farmland prices.

There is, however, one obvious problem with direct evaluation of the present value approach—expectations are not directly observable. Because expectations are not observable, investors are faced with evaluating factors influencing expectations, often relying on current return and interest rate levels as proxies for expectations. Burt established this linkage in a capitalization model econometrically estimated for central Illinois farmland. One important implication of Burt’s research is that using a simple growth rate on future returns is not supported—expectations are formed in a more complicated way. Complex expectation formations can lead to lagged relationships between farmland returns and farmland prices, frustrating those looking for a simple explanation for the current prices of farmland. 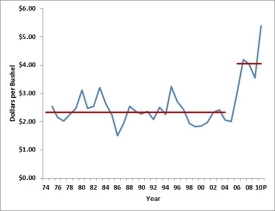 Since the mid-2000s, rapidly increasing quantities of corn have been used in ethanol production, leading to the need for more corn acres, contributing to corn price increases. Illustrative of these increases are national, season-average-prices (SAPs) for corn from 2005-09, as shown in Figure 1. Between 1975 through 2005, corn prices did not trend up or down, but varied around an average of $2.33 per bushel. Since 2005, average corn prices have been much higher. Including the preliminary SAP of $5.40 for 2010 results in a corn price average for 2006-10 of $4.05, an increase of 73% over the $2.33 per bushel average from 1975-2005. Furthermore, rising prices are not restricted to corn, as prices of other commodities also increase to maintain their acreage. Hence, corn use in ethanol also impacts returns to other crops.

A significant question for the future of farmland prices relates to long-term commodity prices. Given the large use of corn in ethanol, Irwin and Good suggest fundamental factors support a longer term corn price near $4.60 per bushel. At a $4.60 price, supply responses could be large leading to lower prices. Moreover, energy and ethanol policies could change. Babcock notes that plausible ethanol policy alternatives could have an impact of over $2.00 per bushel on farm-level corn prices. Moreover, the impact of crude oil prices is more direct than in that past, as corn prices are now tied to crude oil prices through the ethanol market (Good and Irwin, 2009). These linkages introduce new risks to farmland values that reside entirely outside the food and feed sector and often are a byproduct of other political wrangling in energy and environmental debates that frame ethanol policy. 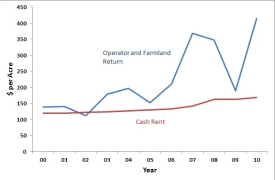 These proportional declines suggest lags in the cash rental market. Like lags observed by Burt in the farmland market, there likely are lags in the rental market, thus leading to a slower adjustment in cash rents than in operator and farmland returns. It is likely that if commodity prices continue to average around $4 per bushel, cash rents will continue to increase. If cash rents equilibrate to 82% of operator and farmland price returns, average cash rents would average $250 per acre, an increase of 47% from their $169 per acre level in 2010. 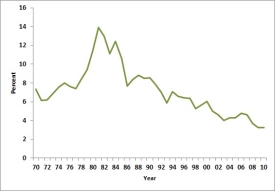 Nominal interest rates have experienced a general decline since the early 1980s, as illustrated by the yields on 10-year constant-maturity Treasury notes (CMT-10) shown in Figure 3. In 1981, the interest rate on CMT-10 was 13.9%. From this high, rates reached a low of 3.2% interest rate in 2010. As interest rates fall, asset prices increase as future cash are discounted at a lower rate. Farmland is a long-lived asset, having cash flows that often are modeled as occurring into perpetuity. Because of its long life, farmland price is much more sensitive to interest rates than shorter lived assets. 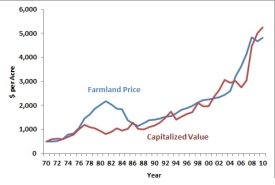 Sensitivity to Interest Rates and Returns

A legitimate concern relates to the interest rate environment and impressions that recent Federal Reserve quantitative easing has resulted in excess short term liquidity, and hence capitalization rates that are “too low”. Given current short term rates, it is unclear how they could go lower, and it is also unclear what form of an “exit strategy” could be employed by the Federal Reserve that would not result in higher rates. Resulting increases in interest rates would in turn place downward pressure on farmland prices, along with downward pressure on other assets as well. Importantly, the effects of a rate change of a given magnitude are amplified when the starting rates are lowest. Thus, even modest increases in interest rates would have a larger impact on farmland prices today than several years ago when interest rates were higher.

Heightening this interest rate concerns is an observation from the 1980s. A large reason for the divergence in capitalized values and prices in the early 1980s was because of a sharp rise in interest rates during the late 1970s and early 1980s. Relatively speaking, declines in farmland returns played a much smaller role in the divergence.

A decrease in cash rent also lowers capitalized values. For example, the $5,281 per acre capitalized value for 2010 is associated with a $169 per acre cash rent. From 2000 through 2005, cash rents averaged $120 per acre. Capitalized values based on that average rent would decline by 29% to $3,750 per acre. Developing scenarios where cash rents fall to the $120 level likely would require corn prices to fall to the preethanol levels of $2.30 per bushel and this in turn would likely require dramatic changes to ethanol policies, as well as reduction in crude oil prices.

With regard to cash rents, it is important to note that there is considerable momentum for continued increases in cash rents in the future if corn prices continue to exceed $4.00 per bushel. Currently, cash rents are a smaller portion of operator and farmland return than during the 2000 through 2005 period. Bidding among farmers likely will push up cash rents to higher levels unless corn prices fall below the $4.00 per bushel price level that is implicitly justified in current rent levels and could be interpreted as a new norm.

What to Look for in the Future

Schnitkey, G. (2010, October). Revenue and Costs for Corn, Soybeans, Wheat, and Double Crop Soybeans, actual for 2004 through 2009, projected for 2010 and 2011. Department of Agricultural and Consumer Economics, University of Illinois. Available online: http://www.farmdoc.illinois.edu/manage/actual_projected_costs.pdf

Gary Schnitkey (schnitke@illinois.edu) and Bruce Sherrick (sherrick@illinois.edu) are Professors in the Department of Agricultural and Consumer Economics, University of Illinois, Urbana, Illinois.