The Current Situation on Farmland Values and Ownership

Farmland values are increasing at rates not seen since the 1970s. Two recent land value surveys reported a 22% increase in Nebraska from February 2010 to February 2011, and prices up 25% in Iowa from March 2010 to March 2011. (Johnson, Wilson, and Van Newkirk, 2011; Iowa Farm and Land, Chapter 2, 2011) Other surveys have reported double digit increases in farmland values throughout the Midwest and Great Plains states. (Federal Reserve Bank; Schnitkey, 2011)

Soaring farmland values have led many people to raise the question of whether or not farmland is on a speculative ‘bubble’ and due for a price correction. The rapid increases in land values during the 1970s were followed by considerable personal, financial and social disruption when the values collapsed in the early 1980s. The 1970s was a truly unique and unprecedented period in U.S. history. Starting in 1972, real farmland values in the United States rose more than 7% a year for 10 consecutive years. In comparison, real land values in the United States rose 3.2% annually from 2005 to 2010 as farmland values fell during the recession in 2009.

Over the past year, farmland values have rebounded, but questions regarding the sustainability of these elevated land values remain. This paper discusses current farmland value trends and the changes in farmland ownership. Strong economic fundamentals—rising incomes and a limited number of farms for sale—appear to be driving recent land price gains. In addition, much of the farmland is owned by older farmers with little intent to sell. Farmland values will be shaped by economic returns and the highly volatile markets make the future path of farmland values very uncertain. 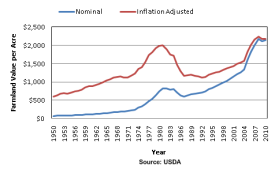 Farmland values have fluctuated over time, especially during the 1970s, 1980s and the past five years. Based on USDA data reporting January 1 farmland values, from 1950 to 2010, after adjusting for inflation, U.S. farmland values reached a record high in 2006, with a nominal peak in 2007 (Figure 1). 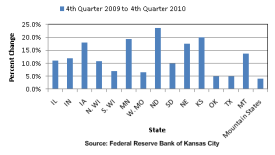 After easing in 2009, farmland values are again on the rise. Based on quarterly data from the Federal Reserve surveys of agricultural credit conditions, U.S. farmland values appreciated sharply in 2010. In fact, in some states, farmland values jumped more than 15% during the year (Figure 2).

The increase in land values is continuing in 2011 and in some states the rate of increase is even accelerating. Participants attending the 84th annual Soil Management and Land Valuation Conference held at Iowa State University May 11, 2011 projected that Iowa land values would increase 33% from November 2010 to November 2011. Since 1964, conference participants have accurately projected land values within 2% of Iowa State University’s land value estimate, despite badly missed projections during the increases in the 1970s and the decreases in the 1980s.

Reasons for the Increasing Land Values

There are many reasons for today’s rising land values. Most are based on sound economic fundamentals. Over the past decade, real net farm incomes have averaged almost $70 billion per year, more than 10% above the 1990s average. The expectation is that farm incomes will remain high for at least the next year or so. In addition, farm wealth is on the rise as farmers appear to not be using as much debt as was used in the 1970s. In fact, it appears that farmers are using at least a portion of the new found income and wealth to pay off debt at a near record pace. Further evidence that market discipline still exists is that farmland values fell when farm incomes dropped in 2009. In the 1970s, farmland values continued to rise after contractions in farm income.

In addition, there has been a substantial decrease in farmland sales, which is attributable to the lack of farms being put on the market, not a lack of demand for farmland. Farmland owners are apparently not selling their farm real estate assets at least until their alternative investment options improve. Finally, farmers are the primary purchasers of farmland and they are buying the land for long-term ownership. Most farmers do not buy farmland with the intent to sell it in order to capture capital gains, and many hold onto land as long as they are financially able to own it.

Still, some of the recent increases may be due to more transitory factors that are not sustainable. For example, we are in unprecedented times with respect to the monetary and fiscal policies. These policy decisions were made as a result of the severe economic downturn. But, the policies encourage borrowing and they also increase the attractiveness of more risky investments. In the case of interest rates, in the fourth quarter of 2010, both the Chicago and the Kansas City Federal Reserve banks reported the lowest real estate interest rates in their data series. Lower interest rates make borrowing cheaper but also decrease the rate of return in alternative investments. Other things equal, lower returns elsewhere in the economy increase the demand for farmland.

In many states, farm income is projected to be strong and farmers are repaying their debts. In fact, USDA reports that inflation-adjusted farm real estate debt has declined since 2008. When farmers do take on new debt, there doesn’t appear to be an irrational exuberance. With interest rates low, the demand for farmland exceeding the supply of land for sale and with strong commodity prices, land values should continue to increase or at least maintain their current levels for the foreseeable future.

Who is Buying Farmland?

Another issue surrounding land values and the current situation is the changing nature of the land ownership. The changing demographics of land owners will have an influence on who will farm the land and how it will be farmed.There are two trends in land ownership that warrant consideration. One trend is who is buying the land and the other is the aging land owner population. 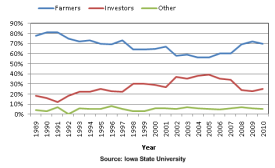 Still, there has been a recent shift in who is purchasing farmland. Although farmers represent the majority of purchasers in many states, the relative percentage of land bought by farmers had decreased while investor purchases have increased. From 2000 to 2007, the percentage of Iowa farmland purchased by farmers fell below 60%, compared to 80% in the early 1990s (Figure 3). At the same time, the percentage of land purchased by what were classified as investors rose from less than 20% in the early 1990s to almost 40% in the mid 2000s. During the early part of the past decade many investors were using IRS 1031 like-kind tax exchanges in purchasing farmland. With the recent increase in income, farmers have become more aggressive in the farmland market, but so have investors. The collapse in the urban real estate market and the drop in interest rates caused many investor and fund groups to look to farmland as an alternative investment opportunity, increasing the demand for farmland.

Yet, when transferring farmland ownership, few owners expected to sell the land to nonfamily members. In 2008, only 8% of Iowa farmland owners indicated they intended to sell the land outside the family. The rest of the land was either going to be inherited, gifted, sold to the family, put into trust or disposed of in some other manner. Interestingly, in 1982, 13% of the land was going to be sold outside the family. (Duffy and Smith, 2008)

It is unclear, whether or not people will carry out their intentions regarding the disposition of their land. However, there does not appear to be any increase in the amount of land being sold on the market, at least not in Iowa. The preliminary results of the study examining Iowa land sales data shows 1.5% of Iowa’s cropland was sold in 1990, 1.9% was sold in 2005, 1.3% sold in 2009 and 1.4% sold in 2010.

A significant factor when considering the current increase in land values and future sales is the age of the landowner. Although national data has limitations, it provides ample evidence that the farmland owners are aging and that there is an increasing percentage of the land owned by people in the older age cohorts.

More recent studies in Iowa and elsewhere support the findings that farmland is increasingly being held in the hands of the elderly. (Abdulla,2009; Liu, Fleming, Pagoulatos, and Hu, 2010; Arbuckle et al, 2008; Petrzelka, Bauman, and Ridgely, 2009). The literature also shows the aging land owner is not a new phenomenon. In 1949, Timmons and Barlowe reported that the percent of farmland owners over 65 years of age in the North Central region increased from 12% in 1900 to 26% in 1946 (Timmons and Barlowe, 1949).

Will this change of ownership increase the amount of land for sale and have a dampening impact on land values? No one knows for sure but the evidence suggests that there will not be a large increase in the amount of land for sale, at least not in the foreseeable future. It appears that the aging landowners will transfer the land primarily to their families and not go through the market. What is not known is what the next generation of owners will do with the land. The indications are that the first inheritors will keep the land but what the subsequent generations will do with the land remains to be seen.

Farmland values are rising at their fastest pace since the 1970s, raising questions about a speculative bubble with respect to farmland. Currently, the supply and demand fundamentals are supportive of today’s rising land values. But, there are several factors to consider. The current land rent to land value for farmland is at the lowest level it has ever been. If this ratio returns to its historical levels, will the change be driven by an adjustment to land values or cash rents? A study comparing stock market returns, as measured by the Standard and Poor’s 500 Index, to Iowa farmland shows that the only years returns on an investment in the stock market exceeded those on Iowa farmland was for farmland purchased during the 1970s and early 1980s (Duffy, 2011a), the last time we experienced such a rapid increase in farmland prices. Monetary and fiscal policies are other factors to consider because they will impact the health of the agricultural economy and land values.

Land is the residual claimant to income in agriculture. With the current and projected levels of income for the sector expected to remain high, land values could increase further. But, as has happened in the past, rising land values, cash rents, and the other costs of production could remove excess profits. As a result, farm analysts must remain vigilant in watching farmland value trends. The longer land values increase at current rates, the greater the tendency to think farmland values will always increase; an attitude which led to the unbridled exuberance in the farmland market of the 1970s and in the urban housing market in the recent time frame. With low interest rates and easy credit, the likelihood of assuming too much debt will increase as well.