The Role of Debt in Farmland Ownership

Farm real estate debt often plays a key role in farmland purchases. Without access to credit, many farmers and ranchers would find it difficult to buy land, especially with current values at historically high levels. Yet, extending too much debt could undermine the sustainability of lofty farmland values, and ultimately lead to a collapse in land markets—as occurred during the 1980s farm debt crisis.

In some respects, farmland market conditions today are similar to the 1980s. Over the last decade, real farmland values have nearly doubled, eclipsing their 1981 high. While farm real estate debt gains have not been as strong as the prelude to the farm debt crisis, debt levels have risen since 2000. So, are today’s lofty land values a debt inflated bubble?

While definitively answering this question is difficult, insights can be gained through assessing the role farm real estate debt has played in the recent surge in land values. This article explores the evolution of the farm real estate debt landscape. In addition, the ability of agricultural lenders to weather a potential downturn in land markets is assessed. The analysis finds that rising farm real estate debt is concentrated among a few lenders and borrowers. In addition, conflicting data from the U.S. Department of Agriculture (USDA) and lender reports raises questions on how much debt is actually in the farm sector today. Still, agricultural lenders are in a strong financial position today to withstand a rather large drop in farmland values.

In the past, farm real estate debt and farmland values followed each other closely. Research points to the farm real estate bubble of the 1980s and subsequent crash being related to and likely caused by too much debt (for a more extensive review of the farm debt crisis see Calomiris, Hubbard, and Stock, 1986; and Harl, 1990). Much of this debt was provided by the Farm Credit System, individuals selling land on contract and commercial banks. 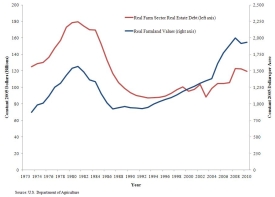 During the 1970s, farmland values surged with burgeoning farm incomes. Strong global economic growth of the 1970s spurred rising farmland values (Henderson, 2008). According to the International Monetary Fund, world GDP growth was around 4.5% annually during this time period. Higher incomes in developing countries spurred an increase in global food consumption, which occurred at a time when the value of the U.S. dollar was weak. With high demand and relatively cheap prices, U.S. agricultural exports surged, lifting farm incomes. Moreover, new export markets opened with the 1972 Russian grain deal, further boosting farm incomes and expectations for further income gains. These future gains were capitalized into the value of farmland as evident by real U.S. farmland values rising to a high of just over $1,500 per acre, as measured in constant 2005 dollars (Figure 1).

When farmland values crashed in the 1980s, the pile of debt created a significant amount of stress for farmers. A global recession and a fight against rampant inflation in the 1980s slashed demand for agricultural products, raised the value of the dollar, and sent agricultural exports and incomes plummeting. As a result, real farmland values dropped more than 40%. This drop was fueled by forced land sales by farmers who could no longer afford to service high debt levels at extraordinarily high interest rates. Consequently, numerous farmers filed for bankruptcy. While farm bankruptcy data is unavailable from 1980 to 1986, by the end of 1987, the farmer bankruptcy rate was 23.05 per 10,000 farms, the highest annual bankruptcy rate on record (Stam and Dixon, 2004). 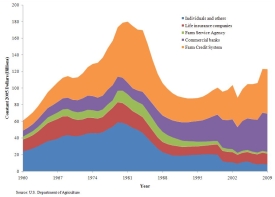 Many agricultural lenders also faced financial stress because rising farm foreclosures cancelled numerous debts secured by real estate. During the 1970s and 1980s, most real estate debt was concentrated among two primary lenders—the Farm Credit System and individuals selling land on contract (Figure 2). According to the USDA, throughout the 1970s, both lenders accounted for two-thirds of total farm sector real estate debt. Life insurance companies, commercial banks and the USDA Farm Service Agency each accounted for about 10% of real estate debt. Starting in 1980, the number of bad loans charged off lenders’ loan portfolios skyrocketed as collateral values on foreclosed real estate loans sank. According to call report data, net loan charge offs at agricultural banks rose from a prefarmland boom of about 0.3% of total loans to over 2.5% in 1985. A comparable number for the Farm Credit System was over 10%. As a result, over 300 agricultural banks failed, the Agricultural Credit Act of 1987 provided the Farm Credit System $4 billion of financial assistance, and individuals who sold land under contract also suffered numerous write-offs.

Today, the farm real estate debt landscape has changed. Farm real estate debt is now heavily concentrated, about 80%, in the Farm Credit System and commercial banks as opposed to individuals (Figure 2). This shift is likely due to the hardships of the 1980s moving most real estate loans to institutions with a regulator. While inflation adjusted farm real estate debt has risen since 2000, its 25% increase is modest compared to the steep rise experienced during the 1970s.

However, the amount of farm debt may be understated. Reported data by the two biggest agricultural lending institutions suggests that real estate debt may be rising. According to the 2010 Farm Credit System’s Annual Report and commercial banks’ reports of condition and income, both lenders reported $141 billion of outstanding farm real estate debt, while USDA reported $132 billion. Explaining why lender reported debt levels are $9 billion higher than USDA reported debt levels is beyond the scope of this paper. This finding does, however, imply that debt levels may be higher than what the USDA reports.

Even if debt levels are indeed lower than what Farm Credit and commercial bank data would suggest, risks still surround farm real estate debt because it is also concentrated among a few borrowers. According to the USDA’s 2009 Agricultural Resource Management Survey (ARMS), about 33% of all producers reported some farm debt.

Of these producers, large farming operations and livestock producers pose significant risks to lenders. In particular, a small subgroup of agricultural borrowers holds a relatively large share of farm real estate debt. While large farming operations with more than $1 million in farm sales only comprise 1.4% of the entire farm sector, they hold 20% of total farm real estate debt (2009 ARMS). Fortunately, these large farm borrowers—who also account for 30% of total agricultural production—have ample farm income with which to repay their sizable amount of farm debt (Briggeman, 2010).

Another group of producers that could be a potential risk to lenders are livestock producers. Lenders are more exposed to livestock operators because 52% of all farm real estate debt is held by livestock producers with crop producers holding the remaining 48%. Given this larger exposure, livestock losses leading to debt repayment stress could strain a lender’s financial health.

If farm borrowers’ debt repayment ability were to fall, agricultural lenders are well positioned to handle rising debt repayment stress. Since 2008, agricultural banks and the Farm Credit System’s profitability and capital levels have increased. However, depressed incomes in the livestock and biofuel industries have increased the number of nonperforming loans or nonaccrual loans. In response, lenders increased their loan loss reserves, especially agricultural banks. 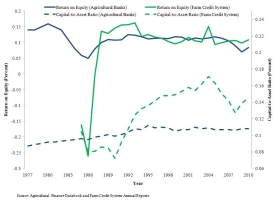 Starting in 2008, agricultural lenders’ profitability fell. The global recession and financial crisis slashed demand for agricultural products. Falling demand reduced U.S. farm incomes as well as the profitability of agricultural lenders. While the Farm Credit System’s return on equity (ROE) held steady, agricultural banks saw a persistent decline in their ROE (Figure 3). Banks had a larger ROE decline because of their exposure to the 2008 struggles of residential and commercial real estate. Even though ROEs were down, they did not come close to their 1980s lows, especially the extreme negative ROE of the Farm Credit System in 1986.

As the global economy started to recover from the steep recession, so did the financial position of agricultural lenders. From 2009 to 2010, agricultural banks and the Farm Credit System saw their ROE rise about one percentage point. Much of this rise is attributable to 2010 net farm incomes rising 31% (USDA).

Note: Data from the Agricultural Finance Databook for agricultural banks, and from annual reports for the Farm Credit System.
Coverage ratio is loan loss reserves divided by nonaccrual loans.

While Farm Credit and banks appear to be well capitalized, nonaccrual loans have increased, prompting lenders to increase liquidity levels. In 2009, nonaccrual loans rose over 40% (Table 1). This rise is largely attributable to falling livestock incomes, especially dairy and poultry incomes, as well as strained profits for ethanol related loans. If these rising nonaccrual loans eventually lift net charge offs, agricultural lenders could be stressed. One way to mitigate this stress is to increase liquidity levels. Farm Credit and agricultural banks have done so by raising their loan loss reserves—their provisions to cover potentially bad debts.

In fact, agricultural lenders are well positioned financially to withstand a decline in farmland values today. Admittedly, trying to predict the impact of falling farmland values on a lender’s farm loan portfolio is difficult (Gustafson, Pederson and Gloy, 2005). However, this does not mean stress testing lenders’ farm loan portfolios is not worthwhile. In fact, economic models analyzing the relationship between net loan charge offs and farmland value declines find that if farmland values fell 3.5%, net loan charge offs could rise 0.2% (Briggeman, Gunderson, and Gloy, 2009). In turn, if net loan charge offs rose 0.2% at agricultural banks and the Farm Credit System, bad debts at both institutions would rise $243 million and $350 million, respectively. While both lenders have sufficient loan loss reserves to absorb this shock, agricultural banks have enough reserves that there coverage ratio would not fall below one.

Rising farmland values and debt levels over the last decade raise the question whether agriculture is heading for another 1980s type farm debt crisis. While trying to predict a “black swan” event like a debt crisis is nearly impossible, the agricultural sector appears to be well positioned to handle a potential downturn in farmland markets. According to the USDA, rising global demand and tight supplies are expected to boost 2011 net farm income 20%. With farm income expected to rise, agricultural lenders’ profitability will also likely rise. In addition, lenders appear to be well capitalized and, according to anecdotal reports, are now cash flow based lenders, not collateral based lenders.

While the outlook for agricultural lenders appears to be bright, they do face significant challenges. The concentration of farm real estate debt among a few borrowers could lead to significant stress in a lender’s farm loan portfolio. The impetus for this stress would likely be a rapid and sustained fall in farm income, which could come from myriad sources. Some of these sources include, domestic and international producers responding to high prices by sharply increasing agricultural production which could push prices down, falling global demand for products, commodity price volatility, a rise in U.S. exchange rates, changes in U.S. farm and energy policy, and global unrest from soaring food prices and inflation.

Managing these risks will be key to the future success of agricultural lenders and producers. A lesson of the 1980s was that low amounts of liquidity and capital can amplify the negative effects of a drop in farmland values. Managing future stress stemming from a farmland value drop may well depend on lenders and producers holding ample liquidity reserves and keeping debt levels low.