Is Poverty Worth Fighting Wars Over?

U.S. Census Bureau Current Population Survey data indicate that using the official federal definition, 46.5 million people were in poverty in 2012, which represents 15% of the U.S. population. Yet, despite a recent uptick in interest in January 2014 surrounding the 50th anniversary of President Johnson’s announcement of a “War on Poverty,” as well as President Obama’s proposals to raise the federal minimum wage, the plight of the lowest income Americans receives remarkably little attention despite the large numbers of people who are adversely affected. Similarly, while there is interest in rising income inequality, most of the discussion appears focused on the middle class. 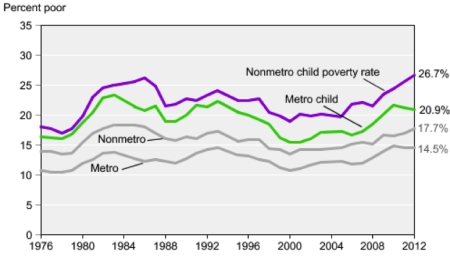 It is somewhat surprising that poverty is not a bigger issue, especially in rural America. Figure 1 shows metropolitan area and nonmetropolitan area overall poverty rates and their child poverty rates using the official federal definition. It is apparent that nonmetropolitan poverty is consistently higher than metropolitan poverty (on the order of 3 percentage points) and this has been the case since the official measure was derived in the 1960s. The nonmetro/metro child poverty gap is even higher and the gap generally increased during the last 15 years. Most recently, the nonmetro/metro child poverty gap was at 6 percentage points. Likewise, 301 of the 353 counties defined as having persistent high poverty of greater than 20% in 1980, 1990, 2000, and 2007-2011 by the U.S. Department of Agriculture (USDA) are nonmetropolitan. Of course, while there may be mitigating factors such as lower rural cost of living, rural poverty and poverty, in general, are not things to be overlooked.

Partridge and Rickman (2006) describe why this benign neglect in addressing issues of poverty comes at a large expense to the nation. First, it smacks against a national notion of fairness and the “American Dream” that anyone has a chance to rise to the middle class or above. Second, more poverty today causes more poverty in the future through its intergenerational nature. For example, low-income families have fewer resources to pay for post-secondary education, whose costs are spiraling upward. College graduate attainment has been rising much faster for wealthy families than for those near the bottom of the income distribution (Bailey and Dynarski, 2011). In addition, money buys better educational opportunities well before university attendance, further constraining poor children’s future employment opportunities. Hence, poverty is being perpetrated and economic growth is constrained by the large numbers of the population who cannot acquire the necessary education to pull themselves out of poverty.

Third, poverty is self-sustaining because young people who grow up in poor neighborhoods typically lack successful labor market role models, as well as successful labor market contacts to help them network for better employment. Thus, a large share of the population will not fully participate in the labor market, further reducing economic growth. In addition, low-income citizens also have worse health outcomes (Mellor and Milyo, 2002), making them more expensive to treat and less able to participate in the labor market, which also reduces economic growth.

There is also evidence that greater poverty reduces economic growth by increasing overall income inequality (Berg and Ostry, 2011). Bear in mind that a certain level of income inequality is necessary for economic growth; it provides incentives to acquire training and education, as well as promote entrepreneurship and innovation. The concern is that the United States has surpassed a tipping point in which growth is constrained by rising income inequality for a host of reasons that often relate to social stability and promotion of rent seeking (Partridge and Weinstein, 2013). Cutting even one-tenth of a percentage point of growth per year would reduce national gross domestic product (GDP) on the order of $16 billion every year. The overall point is that society is also paying a large cost by allowing poverty rates to remain so high. In the global economy, the United States cannot compete if a large share of its population is not contributing their fullest capacity.

Can Government Do Anything About Poverty?

Americans have traditionally held conflicted views of welfare programs that revolve around race, notions of the “deserving poor,” all mixed in with “misinformed” perceptions of public assistance programs in general (Gilens, 1999). In this environment, it is not surprising that the degree to which government programs reduce poverty is one of the most controversial policy debates. To help inform this question, we examine overall poverty rates over the last two generations.

Figure 2 reports overall poverty rates from 1959 to 2012. It shows rapid decline in the 1960s and a more modest decline in the 1990s, during the “Clinton-era” economic boom. However, the general story is one of stagnation after the heady gains of the 1960s, much of which included President Johnson’s War on Poverty. 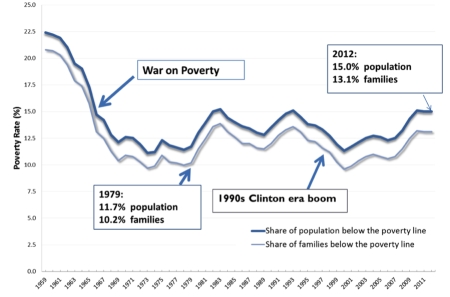 The overall poverty rate bottomed out at 11.1% in 1973, or almost 4 percentage points lower than in 2012. Given that the official poverty rate threshold is an absolute measure (adjusted for household size) that rises at the rate of inflation (for example, it was $23,492 in 2012 for a family of four), any real economic growth that is shared at the bottom of the distribution would mechanically reduce the poverty rate. This discouraging trend of rising poverty rates is touted by conservatives as proof that government efforts to reduce poverty have failed and go further to argue that Johnson’s War on Poverty failed (for example, see the U.S. House of Representatives’ Budget Committee Majority Report, 2014). Liberals are inclined to argue that government efforts have been too timid since the War on Poverty, which underlies the rise in poverty since the late 1960s.

Given that the War on Poverty is a main bone of contention, it is worthwhile to appraise its impact and assess whether government programs can reduce poverty. Table 1 reports overall poverty rates and poverty rates by age sub-groups. First, the overall poverty rate was 22.4% in 1959, 19.0% in 1964, and 12.1% in 1969, when the new Nixon Administration began to scale back and at least partially dismantle the War on Poverty. In particular, the Nixon Administration started dismantling the “community action” aspects of the War, though welfare expenditures did not sharply turn down until the 1980s (Rose and Baumgartner, 2013). Thus, in the five years preceding the War’s onset, poverty rates fell by 3.4 percentage points; during the War’s five years of highest intensity, poverty rates fell by 6.9 percentage points, doubling the pace of poverty reduction.

When considering population subgroups with available data, child poverty rates fell by 4.3 percentage points in the five years prior to the War on Poverty, but by 9 percentage points in the subsequent five years. While data only begins in 1966, Table 1 shows that poverty rates were also declining for 18- to 64-year-olds and for those over 65, though these gains were nowhere near as impressive as for children. Afterwards, it can be seen that, between 1969 and 2012, the only sub-group that had a declining poverty rate was senior citizens, which likely relates to Social Security and other related programs. Conversely, child poverty rates and 18- to 64-year-old poverty rates had returned to the level of the mid-1960s. Conservatives tend to point to changes in family structure as a primary cause, questioning whether government programs are behind this demographic change. Liberals point to rising inequality and timid government efforts to reduce wage inequality, such as the falling real value of the minimum wage.

There were, of course, many things happening in the 1960s besides the War on Poverty, including a relatively strong economic expansion. Nevertheless, the descriptive evidence is consistent with the hypothesis that the War had poverty-reducing effects that were reversed once government efforts were at least partially scaled back. Thus, the raw data is consistent with the War having positive effects. While by no means definitive, it does suggest that “good” government policy can reduce poverty rates. In this vein, both the conservatives and liberals agree that the Earned Income Tax credit is effective in encouraging work among low-income households. So, there is at least some agreement that good government policies can help.

What Should Government Do Next?

As already noted, trying to develop good government policies to reduce poverty has proven to be challenging, but it is worthwhile to note a few observations.

First, reducing children poverty rates should be the highest priority (primarily through helping their parents). Reducing child poverty rates likely requires that their parents have sufficient resources to provide more educational opportunities that would help break the cycle of poverty. Providing high-quality early education would be the first step, as well as efforts to improve affordability of college education for low-income students.

Second, poverty tends to be concentrated in poor neighborhoods and regions such as Appalachia (Partridge and Rickman, 2006). While it is controversial to geographically target poverty to “poor places” that struggle economically, there is evidence that job creation has much stronger poverty-reducing effects in high-poverty clusters, suggesting that poor households are willing to work their way out of poverty if the opportunity arises (Partridge and Rickman, 2007).

While reducing poverty has proven to be very costly and a frustrating process, not cutting poverty also has severe costs for both the affected individuals and the United States’ long-term economic growth. Hence, there are clear reasons to mobilize the “troops” to restart the War.

Partridge, M.D. and D.S. Rickman. (2006). The geography of American poverty: Is there a role for place-based policies? Kalamazoo, Mich: W.E. Upjohn Institute for Employment Research.

Partridge, M.D. and D.S. Rickman. (2007). Persistent pockets of extreme American poverty and job growth: Is there a place based policy role? Journal of Agricultural and Resource Economics, 32: 201-224.