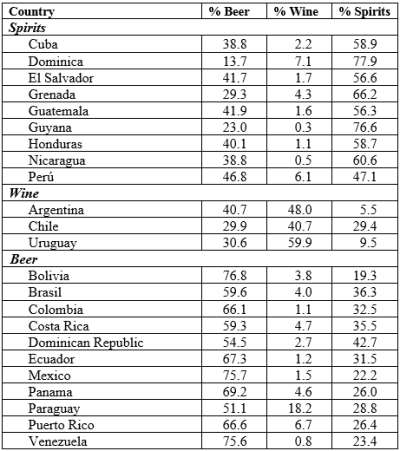 According to World Health Organization (WHO) (2014), Latin American countries are the most heterogeneous on the planet in terms of average preferences for liquor consumption (see also Pierce and Toxqui, 2014; Aizenman and Brooks, 2005). The Caribbean, for example, is recognized for its rum production, while Chile and Argentina are recognized wine producers. But no Latin American country is specifically recognized for its brewing traditions; nonetheless, from 2008 to 2013, beer was the most important alcoholic beverage in the region, with approximately 50% of total production in the alcoholic beverages market.

Analyzing alcohol consumption by country (see Table 1), beer is the most preferred alcoholic drink in 11 out of 23 countries (48%). Spirits are most preferred by 39% of countries, particularly in Central American markets, where populations are more traditionally inclined to the consumption and production of spirits such as tequila and sugarcane distillates such as aguardiente and, particularly, rum. In Chile, Uruguay, and Argentina (13%), wine is the most popular alcoholic drink (WHO, 2014).

Consolidation of the Beer Industry

At the end of the 20th century, 10 firms produced half of all beer worldwide; by 2012 the same share was divided among only four firms (Howard, 2013). This concentration will likely only increase after the merger between AB InBev and SABMiller announced in November 2015 (AB InBev, 2016). This strategic integration has generated a global conglomerate that controls approximately one-third of the global market. The trend toward worldwide concentration has been mainly driven by economies of scale and horizontal integration. In the case of Latin America, concentration levels are substantially higher, almost double, than in the rest of the world.

Worldwide in the last decade, the beer industry has witnessed intense changes in its market structure. After the mass-produced lager brewing industry, or macrobreweries, standardized its industrial processes and took advantage of economies of scale, craft breweries began popping up globally, revealing evidence of possible structural changes in market conditions.

In 2013, 83% by volume of beer consumed in Latin America was produced by just four countries: Brazil (42%), Mexico (22%), Venezuela (11%), and Colombia (8%). With the arrival of multinational companies to the region over the last two decades, the war to conquer Latin American consumers has intensified. In most countries, the beer markets are duopolistic, dominated by big world players such as AB-InBev, SABMiller, and Heineken.

In 2010, Heineken purchased the brewery division of FEMSA, a firm with operations in several Central American countries. In 2011, Kirin Brewery Company, a Japanese firm, ought Brazilian Schincariol Brewery. In Mexico, AB InBev purchased Grupo Modelo in 2013. The arrival of the world goliaths in Latin America has consolidated the market for mass-produced American lager beer.

However, in spite of the apparently strong trend toward industry concentration and the production supremacy of American lager beers, consumers’ interest in new products is increasing. In relation to this shift toward new products, Howard (2013) states that “cultural barriers to global brands in emerging markets, and the rising consumer interest in varieties produced by smaller specialty brewers…” (p. 13) may increase opportunities for small players with differentiated products. Latin America is not an exception, and cultural barriers, income growth, and heterogeneity in consumer tastes may become barriers to the consolidation of a worldwide duopoly.

Traditionally, industries have been characterized as “consolidated” when large companies with high economies of scale make it harder for smaller companies to enter into the market due to cost advantages. The emergence of niche markets result, which is the case for craft beer (Carroll and Swaminathan, 2000; Swinnen and Garavaglia, 2017).

Although large-scale beer still dominates the Latin American market, a new picture is starting to emerge. The main source of recognition for the brewing industry in region is that Latin American beer may be described by three basic criteria (Webb and Beaumount, 2013): it is clear and bland, it is served cold, and it is produced by a big mass brewery, often a multinational company. These characteristics may have generated an opportunity for market development, in which the increase in the number of micro- and craft breweries follows the same structural market pattern witnessed in the North American and European brewing industries.  On average, small brewery market share in the region was 1.3% between 2008 and 2013. Meanwhile, the market share for small breweries in the rest of the world was considerably higher, 4.8% on average (Figure 1; Euromonitor, 2015). 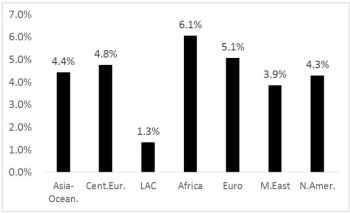 Despite the low market shares of the craft beer segment in the region, the growth rate has been substantially high: 6.6% a year on average between 2008 and 2013. This is more than twice the growth observed in the regional mass-produced beer segment for the same period (2.8%) and almost double the World Bank’s regional GDP growth figure (Euromonitor, 2015).

The Latin American brewing industry is especially dynamic in terms of its rapid growth. Between 2008 and 2013, the sector grew twice as fast as the world beer market sector, an average of 2.8% versus 1.4% (Euromonitor, 2015).  As mentioned previously, Latin American market has reached its maturity due to the consolidation of the mass breweries, and the appearance of small craft breweries indicates a trend toward a more diversified market. In this sense, Latin America and the Caribbean are a battleground for large breweries and a nursery for craft breweries.

Interest in producing and consuming craft beer is recent in Latin America and is growing fast as a niche market, as has happened in other markets around the world. For example, Toro-Gonzalez, McCluskey, and Mittelhammer (2014) analyzed the case of U.S. beer consumption, finding that craft beer consumers are different from those who consume mass-produced and imported beer, with no evidence of substitution among products.

An indicator of the increasing popularity of craft beer is the number of searches reported by Google Trends for the term “craft beer” both in Spanish and Portuguese, Brazil’s national language. The number of searches grew by 3% on average every month from January 2010 to November 2016. Between 2012 and 2016, interest in the term grew by 317%. According to Google Trends, Brazil, Chile, Argentina, and Mexico (in that order) are most interested in craft beer among Latin American countries.

In terms of consumption and income, two elements support the initial claim of a sector with interesting opportunities. According to OECD (2014), Latin America consumes almost half as much per capita annually (1.45 gallons) compared to the rest of the world (2.45 gallons). However, this gap seems to be closing; between 2008 and 2013 the total consumption in Latin America grew by 5.8% on average, while total world consumption grew by only 1%.

In terms of income growth, the income elasticity of demand for beer to be elastic in Latin America, where an increase in income of 1% will increase consumer demand for beer by 1.2%. This implies there is an important opportunity for growth in the brewing industry, especially for craft brewers, whose niche market is highly influenced by income level (Toro-Gonzalez, 2015). Income in Latin America is expanding at 3.8% yearly (World Bank, 2017). This is an important element to explain the 42% in total market growth over the last 20 years in the region. It is possible to infer that the market will expand in the near future, given the regional income growth trends (Toro-Gonzalez, 2015).

Carroll, G.R., and A. Swaminathan. 2000. “Why the Microbrewery Movement? Organizational Dynamics of Resource Partitioning in the U.S. Brewing Industry.” American Journal of Sociology 106(3):715–62.

Howard, P.H. 2013. “Too Big to Ale? Globalization and Consolidation in the Beer Industry.” Working Paper, SSRN.

Pierce, G., and A. Toxqui. 2014. Alcohol in Latin America: A Social and Cultural History. Tucson, AZ: University of Arizona Press.

Daniel Toro-Gonzalez (dtgindorg@gmail.com) is Dean and Titular Professor, School of Economics and Business, Universidad Tecnológica de Bolivar, Cartagena, Colombia. Acknowledgements: I would like to thank Joshua Berning, Michael McCullough, and two anonymous reviewers for their helpful and constructive comments that greatly contributed to improving this article This article is based on Chapter 4, “Craft Brew Industry in Latin America: The Case of Colombia” of the book Economic Perspectives on Craft Beer: A Revolution in the Global Beer Industry, edited by Christian Garavaglia and Johan Swinnen, published by Palgrave Macmillan (forthcoming, 2017).