As public funds for conservation and environmental protection grow scarcer, and land prices increase, cost-effective policies become more and more important. Whether we have a given budget and need to determine how much conservation that money can buy, or legislation mandates a given level of environmental protection as a goal, the integration of biophysical science and socioeconomic analysis is crucial to good program design. This issue has become particularly important because, as Federal budgets shrink, U.S. conservation policy is broadening the variety of its environmental goals: soil productivity, air and water quality, wildlife habitat, and carbon sequestration. There may be trade-offs between some of these goals, and integrated modeling is crucial to quantify them. Further, integrated modeling can be used to assess the suite of activities, payments schemes, and range of benefits that policies can achieve, both in terms of social welfare and environmental quality.

Integrated modeling refers to models that combine economic and environmental/hydrological elements. In the case of nonpoint source pollution (NPSP) analysis, such models are usually spatially explicit because pollution from an activity performed on different parcels of land is different depending on their location relative to where the pollution is measured, and other characteristics such as historical land use, soil, slope, and so on. Integrated models are characterized by the coupling of baselines and scenarios. 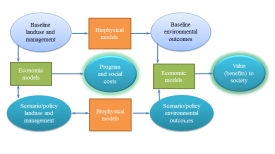 Typically, integrated models have focused on the cost of pollution reduction activities and the associated benefits measured as decreases in pollutants—for example, reductions in sediment losses, nitrogen leaching, or pesticide run-off. However, it is possible to use these decreases in pollutants in revealed and stated preference studies to monetize the value of environmental quality improvements (Egan, Herriges, Kling, and Downing, 2009; Loomis, et al. 2000). As Figure 1 illustrates, such completely integrated models allow the estimation of both benefits and costs in monetary terms.

There are many issues to be addressed in the process of model integration, from the harmonization of units of analysis in time and space to the creation of scenarios that models can process. A particularly important issue is the harmonization of the baseline, that is, the starting point land use and management practices from which the models determine changes (Figure1).

The definition of a baseline, or how much conservation is occurring before a program is put in place, is a non-trivial enterprise both from a data collection and availability standpoint and from a program design perspective. Determining the level and location of conservation activities already being performed is difficult by definition in the case of nonpoint source pollution control because such activities are not easy to monitor. New technologies are reducing the uncertainty associated with nonpoint source activities by identifying land management practices accurately and cost-effectively, though these technological advances do not eliminate uncertainty in discharge and delivery. For example, remote sensing can be used to assess tillage levels (Watts, Powell, Lawrence, and Hilker, 2011) or to monitor the effectiveness of cover crops for nutrient uptake (Hively, et al. 2009). The first example illustrates the capacity to construct a baseline of management practices, while the second identifies potential environmental performance. Activities are good approximations of both baseline environmental quality and program performance only if they are closely correlated to environmental outcomes—for example, a reduction in tillage intensity by X increases carbon sequestration by Y.

In the future, remote sensing coupled with biogeochemical modeling could allow assessments of field-level environmental performance on a regular basis. In the meantime, however, we are able to only partially determine baselines and subsequently monitor changes in activity or performance. Therefore, program design has to take into account whether to allow for practices which are difficult to monitor, and whether the baseline levels of activities should be compensated. Integrated modeling plays a role in these decisions by allowing assessments of the costs to society and to the program, and of the range of benefits associated with specific policy choices. The decision may be made, say, for equity reasons, to reward good actors who have already implemented practices. This was the case of the 2002 Farm Bill Conservation Stewardship Program. Integrated models help evaluate trade-offs associated with program choices such as baseline/participant determination criteria, and the associated effects on environmental quality.

Models for Before and After Assessments

Integrated models can be used to design new policies—to determine the cost of a predefined program or to identify the most cost effective scheme. In particular, they can play a critical role in constructing targeting schemes, which allow more bang for the buck by focusing on the best lands and practices to include in conservation programs. For example, Yang, Khanna, Farnsworth, and Önal (2003) constructed an integrated, spatially explicit model to determine the best parcels to set aside from crop production in order to achieve sediment load reductions in a cost-effective manner  (See Box).

The Yang, Khanna, Farnsworth, and Önal study shows how economic models can be used to drive the construction of the scenarios to assess—hence the two-directional arrow in Figure 1. Alternative approaches start from the biophysical models or, in the more recent literature, use algorithms to determine the scenarios on the basis of both economic and environmental performance simultaneously (Rabotyagov, et al. 2009).

In addition to these types of scenario analyses before a policy is implemented, models can also play an important role in program assessment after implementation. A notable illustration of this approach is the Conservation Effectiveness Assessment Program (CEAP), the first national effort to determine the environmental benefits associated with Federal farm bill conservation programs, and how to improve their effectiveness. Due to financial constraints and technological limitations, monitoring of conservation activities and environmental performance is still limited. Therefore, in CEAP, integrated models have been used extensively to study the efficacy and cost effectiveness of conservation programs both at a national scale and in selected watersheds (Duriancik, et al. 2008) (See Box).

As implementation of the Total Maximum Daily Load (TMDL) provisions of the Clean Water Act progresses, interest in the different policy tools that could be used to limit non-point source pollution has increased. In particular, water quality trading mechanisms have been the subject of many studies because of their potential cost-effectiveness. In 2004, an Environmental Protection Agency (EPA) -sponsored project identified 40 initiatives and six state programs (Breetz, et al. 2004). The focus has historically been on point to point trading, in part because of the difficulty in determining the value of credits for nonpoint sources such as crop farmers. The potential for non-point sources to participate in trading schemes, however, appears high (Ribaudo and Nickerson, 2009). The large scale implementation of these programs will rely extensively on models. For example, the recent Chesapeake Bay TMDL and the policy-making process that led to it spurred a proliferation of model development and implementation studies and activities. The nonpoint source portion of the Chesapeake Bay states’ water quality improvement programs rely heavily on models (Latane and Stephenson, 2011).

Integrated models are crucial to assess the impact of a policy on multiple environmental goods and services and traditional commodities. As U.S. conservation policy has moved away from a focus on limiting soil erosion to a much wider set of goals—such as preserving water and air quality, enhancing wildlife habitat, and, more recently, sequestering carbon—the role of integrated models has become more crucial. This broadening is reflected in changes to the criteria for enrollment into the Conservation Reserve Program (CRP), the largest Federal land set-aside program, which have gone from a focus on soil conservation when it was instituted in 1985 to a broad Environmental Benefit Index in 1996. Since 2003, carbon sequestration has been added to the list of benefits. In an almost parallel fashion, in the early 1980s, the U.S. Department of Agriculture’s Agricultural Research Service developed the Erosion Productivity Impact Calculator (EPIC), a field-scale environmental model which was first widely used in the 1985 Resources Conservation Act assessment. In the mid-90s, EPIC added components to assess water quality impacts, from nutrients to pesticides, and the model’s name was changed to Environmental Policy Impact Climate. In 2004, carbon routines from the CENTURY model were incorporated in the model (Gassman, et al. 2005).

These changes in policy goals and the model’s capacity to quantify them reflect our deepened understanding of the value and breadth of ecosystem services, and are likely to expand further in the future. Several studies show the potential for trade-offs and the need to account for a wide range of environmental impacts to avoid unintended consequences: growing trees for carbon sequestration may have potentially negative effects on water quantity (Jackson, et al. 2005), and increasing biofuel production for climate mitigation can decrease water quality (Secchi, et al. 2010). On the other hand, integrated models have also found double benefits—instances in which the production of one environmental good also improves the provision of another. Nelson et al. (2009) found that, in the Willamette River basin, preserving forests and increasing natural areas improves water quality, sequesters carbon, and also increases biodiversity, thereby showing a wide range of environmental benefits positively correlated with the same conservation activity. If payments for ecosystem services that include public, nonprofit, and private actors become prevalent, such accounting for the simultaneous provision of multiple environmental goods and services will become imperative. Since this is an empirical question that depends on the specific activities and socio-environmental systems at hand, models will be necessary to determine the signs and sizes of these relationships. For example, municipalities may be willing to pay for the reduction in flood risk associated with wetland restoration if such costs are lower than those of more traditional structural practices. However, because of the infrequency of flooding and its stochastic nature, such benefits will have to be quantified with models. Wetland restoration has a much wider range of benefits though, including carbon sequestration, nutrient cycling, and recreational benefits. Jenkins, Murray, Kramer, and Faulkner (2010) provide an example of their simultaneous quantification and monetization for the Mississippi Alluvial Valley, using models, as part of the CEAP project A complete assessment of the full range of environmental impacts associated with wetland restoration would require the coupling of carbon cycling, surface water quality, and hydraulics models such as those used by the U.S. Army Corps of Engineers for floodplain management. These would be linked with economic models of the value of recreation and the cost of conversion (Figure 1). In a landscape in which centralized Federal funding is low and there are several potential payers for specific benefits, not accounting for all benefits may result in the under provision of environmental goods and services (Banerjee, et al. 2013)(Banerjee, Secchi, Fargione, Polasky, and Kraft, Forthcoming). Models play a key role in estimating the whole range of services associated with conservation practices and nonpoint source pollution control.

Integrated, policy-driven modeling is still a relatively new research area. Therefore, many issues still need to be addressed. The most important ones, from a decision-making perspective, are related to the limited capacity of the models to address the full set of possible policy options. This can be true from a socioeconomic perspective—say, an economic model does not adequately capture a farmer’s unwillingness to participate in a program for social or moral reasons—or from a biophysical perspective—a surface water model only coarsely captures effects on groundwater. Models developed for one purpose are often stretched to others, and though model development can help address initial inadequacies—as the evolution of the EPIC model illustrates—often the results of the integration are presented without emphasizing the uncertainties. For example, if water quality models calibrated and validated on the basis of sparse data are coupled with climate change models for the assessment of the future value of conservation practices, the uncertainty of each model component is compounded. It is important to recognize the limits of individual model components and how they affect the integration.

Silvia Secchi (ssecchi@siu.edu) is Assistant Professor, Department of Agribusiness Economics, Southern Illinois University, Carbondale, Ill. This work was funded in part by the U.S. Department of Agriculture's Agriculture and Food Research Initiative, Award number 2010-65400-20434, and the National Science Foundation under Awards 1114978 and 1009925.