Initial Clean Water Act implementation significantly reduced the discharge of pollutants to coastal waters and bays by improving sewage treatment and disposal practices and controlling industrial pollution that flows out of discharge pipes. However, polluted runoff (or “stormwater”) remains a major source of contamination to coastal waters (U.S. Environmental Protection Agency (EPA), 1983; and EPA, 1993). In urban areas, paved areas and other impermeable surfaces impede the natural hydrologic cycle in which rainwater is filtered and absorbed into surface waterways and groundwater basins. Instead, stormwater flows across roads, buildings, and other “hardscapes,” picking up pollutants including heavy metals, organic contaminants, nutrients, suspended solids, solid waste, and pathogens. Polluted runoff can enter coastal waters directly through muddy plumes near river mouths and storm drains or, in other cases, is transported through outfalls below the surface to the ocean. 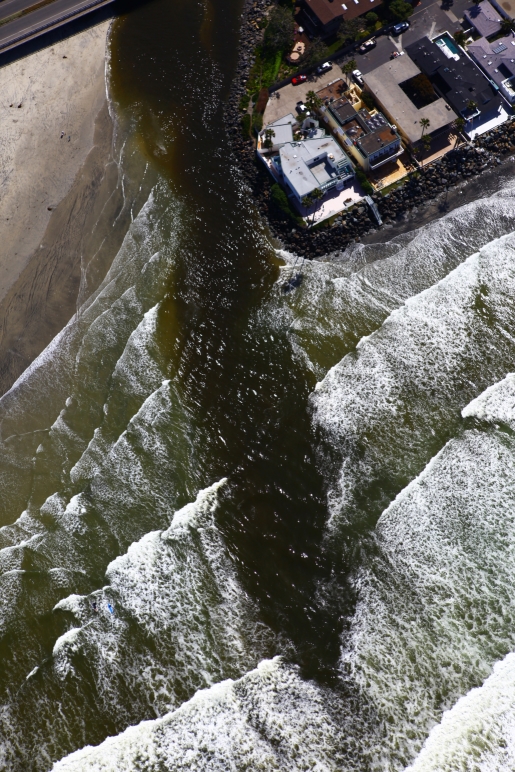 In previous decades, the large dilutive capacity of the ocean was seen as a natural solution to urban- and agricultural-polluted runoff and sewage pollution. However, the EPA’s 2000 assessment of severely impaired waters identified urban runoff as the primary source of impairment for more than a third of estuaries and more than half of ocean shorelines. The assessment identified agricultural runoff as the primary source of impairment for rivers and lakes, second largest for wetlands, and a major source for estuaries and groundwater. Polluted runoff impacts on coastal waters such as eutrophication, hypoxic “dead” zones, fish kills, and other damages are now well-understood and documented.

Contamination of coastal and bay waters can cause beach and shellfish area closures and health impacts to swimmers and consumers, amounting to significant direct and indirect costs to individuals, communities, and industries. Researchers (Ralston et al., 2011) estimate that, each year, over five million cases of gastroenteritis may be caused by swimming at contaminated U.S. beaches, with an annual health care cost of over $300 million. Polluted runoff also impacts the commercial fish and shellfish industries. Shellfish harvesting is prohibited or highly limited in 40% of existing harvest areas because of high bacteria levels primarily due to urban runoff discharges. In the Puget Sound, one harvest area lost $3 million in shellfish sales due to forced closures. Contamination and loss of aquatic species and habitats from polluted runoff cost the commercial fish and shellfish industry up to $30 million per year (National Oceanic and Atmospheric Agency (NOAA), 2000).

Clean water laws and permitting frameworks have had limited success in addressing polluted runoff. Polluted runoff sources are often widely dispersed, thus making it difficult to identify responsible parties and incentivize engagement from private actors. However, in some cases, the existence of regulatory obligations has prompted the development of new approaches to meet Clean Water Act requirements and reduce polluted flows to estuaries and coastal areas. Many of these approaches may require long-term commitments and deeper collaboration between dischargers and regulators, but can also yield a suite of benefits for coastal and estuarine ecosystems and communities. Many pollution reduction techniques capture and collect water for local use, among other community benefits. Here we examine four approaches aimed at changing the fundamental behaviors and dynamics that contribute to polluted runoff, with a focus on solutions suitable for coastal and bay communities. For each approach, we provide a brief overview and then present different applications of the approach, with an emphasis on five criteria:

Pollutant trading programs are increasingly employed throughout the country to address excessive nutrients, phosphorous and sediment. Trading programs set a pollution limit, distribute the allowable pollution across “polluters,” and allow them to trade with each other. In most cases, the regulatory driver has been the establishment of a Total Maximum Daily Load (TMDL) or “pollution budget.” Polluters with higher pollution control costs can meet their regulatory obligations by purchasing pollution reductions from another polluter who reduces pollution at a lower cost. Trading programs are voluntary, especially for agricultural communities, but provide permit holders with an alternative approach to meet their regulatory obligations through a market-based strategy. There are approximately 21 active and pilot water quality trading programs in place in Colorado, Idaho, Maryland, Michigan, Ohio, Oregon, Pennsylvania, Vermont, and Virginia (Fisher-Vanden and Olmstead, 2013).

In 2001, the EPA estimated that expanded use of water quality trading could reduce compliance costs associated with TMDL regulations by $1 billion or more annually between 2000 and 2015. However, critics point out several fundamental challenges with water pollution trading programs that must be resolved before they can function effectively. One overarching concern with pollution trading, in any context, is the implied assignment of “rights to pollute.” Additionally, the scientific models that underlie the development of TMDLs or pollution budgets are often subject to controversy and legal challenge, thus undermining the validity and “buy-in” to subsequent trading programs. Further, pollutant trading doesn’t eliminate localized concentrations of pollution and can lead to the development of pollution hot spots. Nonetheless, some commentators maintain that pollution permit trading systems can meet or exceed environmental goals at lower costs in certain circumstances (Fisher-Vanden and Olmstead, 2013).

Chesapeake Bay: According to the EPA, an average rainfall year causes over 250 million pounds of nitrogen and almost 20 million pounds of phosphorus to drain into the Chesapeake Bay. The situation became so critical that, in 2010, the EPA intervened and developed a TMDL, or “nutrient diet,” for the Chesapeake. The TMDL sets a watershed-wide annual limit on the amount of nitrogen, phosphorous, and sediment that can be discharged. To reduce the cost of the regulated sector in meeting their requirements, a mix of regulatory and voluntary approaches are being used to meet the TMDL. Although it is premature to determine the effectiveness of these programs, each state believes it will achieve the TMDL’s mandate of a 25% nutrient reduction by 2025. The trading programs also reduce TMDL compliance costs and can stimulate the development of innovative new polluted runoff management practices. The projected direct financial savings to dischargers are expected to be significant, and the programs help protect the Chesapeake’s ocean-based economy. Maryland and Virginia’s commercial seafood industry alone realizes $3.39 billion in sales and produces over 34,000 jobs with a combined income of $890 million.

Lawn Removal in Los Angeles, Calif. The Los Angeles Department of Water and Power (DWP) offers landowners rebates for removing their lawns and installing water-efficient landscape equipment such as weather-based irrigation controllers. So far, 1.5 million square feet of lawn has been replaced and water use is down 20%. Following a dry 2013 winter, DWP increased rebates from $1.50 to $2 per square foot of lawn. This program is innovative in its goal of addressing polluted runoff at its source through the integration of private property and public right-of-way improvements (Belden et al., 2012).

Green Roofs in Portland, Ore. The city of Portland offers landowners rebates for installing “green-roofs.” Green roofs use vegetation and soil to capture rain, filter and slow runoff, and reduce the volume of runoff flowing into sewers and streams. The city offers $5 per square foot of green-roofing, and expects to reach its goal of 43 acres of coverage by late 2013.

Land acquisition programs buy large swaths of land to protect riparian corridors and coastal ecosystems from pollution, improve water infrastructure systems, and subsidize environmentally sound economic development. Programs can also utilize conservation easements, an option for a landowner to sell specific development rights while retaining the right to use the land for other agreed-upon purposes.

New York: The Catskills watershed in New York City covers nearly 2,000 square miles with 19 reservoirs and aqueducts providing 1.2 billion gallons of drinking water daily to 9 million New Yorkers. To combat polluted runoff, the N.Y. Department of Environmental Protection (DEP) had to choose between building an $8-10 billion filtration plant or spending $1.5 billion on watershed restoration and riparian buffering in the upper watershed to prevent polluted runoff. The DEP choose the latter and, in 1997, created the Land Acquisition Program, which protects undeveloped, environmentally sensitive watershed lands through property acquisition and conservation easements, primarily on vacant land associated with wetlands. As of June 2009, DEP has protected 143,212 acres of land within New York City’s watershed, encompassing the Delaware, Catskill, and Croton watersheds. The Land Acquisition Program also aided in postponing the construction of a massive treatment plant and made substantial investments to modifying agricultural practices in the region.

Florida: In 2002, Florida identified Wakulla Springs, a critical drinking water source and one of the largest artesian wells in the world, as impaired by nitrate pollution due to urban runoff, polluted runoff combined with wastewater overflows, and agricultural runoff. Florida responded by creating the Wakulla Springs Protection Zone that required over 10,000 acres of land be protected to reduce polluted runoff impacts to the watershed. Studies were conducted to confirm the sources of polluted runoff and to prioritize riparian lands for acquisition (Harrington et al., 2010). As a result of these studies, Florida approved $1.5 million to acquire over 600 acres to protect critical riparian zones and reduce nitrate applications from inorganic fertilizers from agriculture and lawns, animal waste, domestic waste water, and residential land use that impacts the state’s coastal waters and bays.

California: Copper is often detected in urban runoff and is highly toxic to aquatic species. Copper from brake pads accounts for more than half of the human-generated copper in polluted runoff. Washington and California have enacted legislation to reduce copper in brake pads. In 2010, California passed Senate Bill 346, the Copper Brake Pad Ban, to require brake pad manufacturers to use pads composed of 0.5 percent copper or less by 2025. Other states are considering similar bans, which shifts the responsibility of copper contamination from municipal permit holders to brake pad manufacturers.

New York: Phosphorous pollution is a serious threat to waterbodies. Excessive amounts turn waterbodies green with algae, impacts drinking water supplies, and kills fish due to a lack of oxygen. Detergents and fertilizer are only two sources of phosphorous pollution, but detergent is the source of up to 34% of municipal water’s phosphorous levels, and fertilizers account for up to 50% of the levels in polluted runoff. In 2010, the New York Legislature addressed the issue by banning household dishwater detergents that contain phosphorous. Similar bans have been enacted in 16 other states, forcing detergent makers to redesign their products to produce low-phosphate formulas. In 2012, New York also joined 11 states to ban phosphorous fertilizers.

1Both the land acquisition program and the fertilizer fee created more clean drinking water, but did not necessarily create an additional water supply
2While the permittees must comply with the TMDL, no permittee was required to participate in the trading program that was voluntary.
3It’s not voluntary for NYC, but is voluntary for riparian landowners to sell property.

State and local governments are initiating new policies designed to change behavior and address polluted runoff’s negative economic and health consequences—many in coastal and estuarine areas. We highlight a small handful of those policies that seek to create incentives to remove pollutants at the source or to take steps to restore the natural ability of watersheds to do so. By focusing on both behaviors and technical solutions, these policies reduce polluted runoff while also reducing costs of implementation and creating additional benefits beyond pollution mitigation. The promise of these new policies provides extensive societal benefits, more flexibility, and even benefits for the polluter, either through financial incentives or by encouraging behaviors that yield local as well as watershed and coastal benefits. These policies include both “carrots” and “sticks” (Table 1) and other incentive structures that reward good behavior and are able to achieve stormwater goals.

American Rivers, Water Environment Federation, American Society of Landscape Architects and ECONorthwest. (2012). Banking on Green: A Look at How Green Infrastructure Can Save Municipalities Money and Provide Economic Benefits Community-wide.