The U.S. policy regarding water quality is codified in the 1972 Clean Water Act and amendments. The Act formally distinguishes between point sources and nonpoint sources of pollution entering waterways and assigns primary responsibility for controlling nonpoint source pollution to the states. Point sources—such as industrial facilities or wastewater treatment plants—fall under the National Pollutant Discharge Elimination System requirements of the Clean Water Act, and being so are subject to federal regulation and permitting requirements. A substantial reduction of emissions from point sources to waterways has occurred since the adoption of these requirements, leading to much improved water quality in many watersheds. However, in many agriculturally dominated watersheds, point sources contribute a relatively small percent of the overall nutrient load and, therefore, the restrictions on these sources have not achieved the desired improvements in water quality. The nutrients of primary concern in these watersheds are nitrogen and phosphorus, which cause excessive plant and algae growth resulting in water quality degradation.

Nutrient pollution from row crop agriculture is clearly identified as a nonpoint source in the Clean Water Act and, as such, its control is under state jurisdiction. States are free to develop regulations or enforceable standards on nonpoint sources including the agricultural sector, but until recently, few have chosen to do so. Instead, states have generally adopted a voluntary approach whereby conservation practices that reduce nutrient loss from fields—commonly called “best management practices” or BMPs, for short—are encouraged by extension agents and state agencies, sometimes in conjunction with cost-share programs provided by federal or state governments. A notable component of the cost-share programs is that, as the name implies, they typically cover only a fraction of the total cost of installing and maintaining conservation practices such that adopters of these practices do so at a cost. An important exception is the Conservation Reserve Program which pays landowners to remove land from crop production and plant native grasses or perennials.

As previous authors have noted (Shortle et al., 2012; and Kling, 2011), the reliance on voluntary adoption of conservation actions is inconsistent with the “polluter pays” principle and implies that the property rights to pollute rest with the polluter rather than society at large. As an overarching principle, the use of the “Pay the Polluter” principle (Shortle et al., 2012) is relatively rare elsewhere in U.S. pollution policy and does not generally apply to point sources of water pollution.

States are also responsible for developing goals for water quality improvement when agricultural nonpoint sources are important sources of impairment under the directive of the Total Maximum Daily Load—TMDL—program. Under this program, states are required to identify bodies of water that are too polluted to meet the purposes that the state would like them to meet such as being clean enough to provide drinking water or to support recreational fisheries. Once identified, states need to determine the origin of the pollutants and the “maximum load” of pollutants that could be allowed, and improve the quality enough to meet the designated purpose. Once this TMDL is identified, it is the responsibility of the states to develop plans for meeting those loads. For an excellent discussion and explanation of this process, see the National Research Council report on the Mississippi River (2008). The key point for discussion here is that the strategy for achieving the improvements in water quality lies with the states, and both regulatory and nonregulatory options are at their disposal.

The lack of improvement in water quality in agriculturally dominated watersheds has led to increased pressure for states to try new approaches. Water quality trading is being adopted in some areas and may yet prove quite helpful. However, there is a sizable portion of the continental United States where trading between point and nonpoint sources, as constructed in most current trading programs, cannot achieve notable improvements. This point is quantified indirectly by Ribaudo et al. (2008) who identify over 700 watersheds in the United States that have nitrogen impairments and wherein a water quality trading program in nitrogen might be possible. However, in over two-thirds of those watersheds, point sources contribute 10% or less of the nitrogen load, which means that even capping these sources at zero could achieve no more than a 10% reduction in loads. Faced with pressure to do more, a few states have begun to directly regulate some aspects of agricultural activity in an effort to reduce nutrient movement into waterways.

Environmental economists have historically considered two criteria—regulations or taxes—in evaluating policy instruments (Baumol and Oates, 1988). First, the policy instrument needs to achieve the environmental goal set forth by society. Second, the policy should achieve the goal at the least overall cost possible. This paper discusses the problem of water quality associated with nutrients from crop production, outlines a few regulations that states have adopted to address the issue, and considers a novel set of regulations adopted by Florida covering an agricultural region near the Everglades. The paper concludes with a discussion of the degree to which the Florida program satisfies the two goals of environmental policy commonly articulated by economists.

What is the Magnitude of the Problem?

The large hypoxic, or “dead,” zone in the Gulf of Mexico has become something of a poster child for the problems of nutrient enrichment in agricultural watersheds across the Cornbelt and much of the Upper Midwest. Nutrients from this region flow into the Gulf each year causing excessive plant growth which, as it dies, depletes the oxygen levels to the point that most aquatic life cannot survive. In the summer of 2013, the size of this annually recurring area was nearly 6,000 square miles—about the size of Connecticut and the fifth largest on record (Hypoxia Report, 2013). The U.S. Environmental Protection Agency’s (EPA) Science Advisory Board (2007) assessment of the science related to hypoxia suggests that both nitrogen and phosphorus loadings to the Gulf will need to be reduced by at least 45% each to achieve the targeted goal. The report also indicates that row crop agriculture in the central United States is the largest contributor of these nutrients.

While the large hypoxic zone is an easily identifiable and large ecosystem-wide effect, water quality throughout the entire Midwest is heavily impacted by nutrients. A summary of the EPA’s findings from its freshwater lakes, wadeable streams, and coastal areas statistical surveys clearly outline the breadth of the issue:

More than 100,000 miles of rivers and streams, close to 2.5 million acres of lakes, reservoirs and ponds, and more than 800 square miles of bays and estuaries in the United States have poor water quality because of nitrogen and phosphorus pollution.  (U.S. EPA)

In short, the hypoxic zone in the Gulf seems best viewed as the end result of a broad set of environmental damages that occur throughout the entire upstream ecosystem.

A third region that has been heavily impacted by nutrient over-enrichment is the Chesapeake Bay. Like the Midwest, urban and point sources contribute to the problem, but row crop agriculture is the largest non-regulated contributor. More than 90 tidal segments along the Bay and dozens of streams, lakes, and rivers throughout the watershed are negatively impacted. Interested readers can find extensive literature on any of these regions, but these few summary statistics make clear that the problem of nutrient pollution from row crop production is pervasive, affecting all regions of the country with significant land use in agriculture.

A few states have begun to implement limited regulations on agricultural activities in order to reduce the nutrient export from the land. A few examples are outlined in Table 1. These are examples, not an exhaustive list; but, they serve to highlight the areas where states have begun to focus their attention. Maine, Maryland, Pennsylvania, and Vermont are all states that have chosen to impose some form of ban on winter application of manure or fertilizer despite the fact that such bans can raise storage costs. This is widely regarded as a fairly low-cost approach to reducing nitrogen loss. Minnesota and Pennsylvania have adopted setbacks or buffers near rivers and lakes in some locations. Wisconsin has a set of regulations that include setbacks and nutrient management plans. 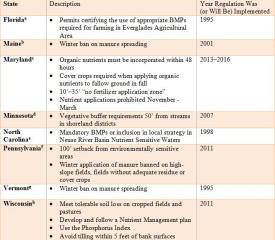 A particularly interesting case of state-based regulation is the phosphorus reduction regulations in the Everglades Agricultural Area located southeast of Lake Okeechobee. The 283,000 ha of land drain into the Everglades and are planted to sugar cane, winter vegetables, sod, and rice. With the passage of The Everglades Forever Act in 1994 came the requirement that growers in the Everglades Agricultural Area receive a permit indicating compliance with conservation actions in order to grow crops. Several novel components of this regulatory approach are worth emphasizing. First, while growers were required to have an approved plan of BMPs before being allotted a permit to farm, farmers are allowed to choose from a suite of practices to tailor the conservation actions to their fields and preferences. Thus, this is not a strict command and control regime with a completely top-down regulatory approach. Second, both farm-level discharges and basin-level monitoring were implemented so that the environmental gains from the actions could be adequately assessed. The implementation of a watershed scale set of BMPs in conjunction with a rigorous monitoring program associated with the drainage systems used to control water levels was a very valuable (and unique) component of this regulation as it allows a careful assessment of the policy’s effectiveness.

Clearly the property rights have been reversed in the Everglades Agriculture Area: after passage of the law, landowners were not allowed to choose the level of pollution they chose. Likewise, the program is consistent with the “polluter pays principal” —financial support was not provided for growers to cover the cost of these practices up to the point where the 25% target was met. However, for phosphorus load reductions above the target, tax incentives are provided.

Did the regulation achieve the first goal of attaining society’s target? Here the answer is a resounding “yes.” The monitoring program shows that the target of a 25% reduction in phosphorus loads was exceeded in every year since full implementation of the program began in 1996—and averages over 50%. Did the regulation satisfy the second goal: to achieve the target at least cost? Here the answer is less clear. The fact that the regulation allowed farms to choose from among several conservation actions should be consistent with cost efficiency since farmers could choose the practices that best suited them, presumably those with the lowest cost or management and time costs. However, to be fully consistent with a least cost allocation of conservation efforts across the watershed, those efforts should be targeted to the locations that are most cost effective: this could mean additional conservation actions on some fields and no actions on others. Whether a more cost effective allocation could have been achieved is an empirical question, but it is worth noting that the permits could, in theory, have been made tradable, thereby allowing for implementation of a nonpoint-nonpoint water quality trading program.

Nutrient pollution from the nation’s vast and productive agricultural lands is a challenge that will likely require a multitude of approaches to successfully address the problem. The apparent success of the Everglades program raises the question as to whether such a system could work in other states to achieve water quality goals and be a useful tool in meeting society’s water quality goals.