How Has the Trade Dispute Affected the U.S. Cotton Sector?

Discourse on the implications of the U.S.–China trade dispute on agriculture has primarily focused on the soybean sector. Given that soybeans are the largest U.S. agricultural export (valued at $21.6 billion in 2017) and China is the primary destination, it is understandable why this sector has received so much attention. The impact of the U.S.–China trade dispute on the U.S. cotton sector has received considerably less attention. Albeit smaller than U.S. soybean exports, cotton is a leading agricultural export for the United States. In 2017, U.S. cotton exports totaled $5.8 billion, with 17%, nearly $1.0 billion, exported to China. Additionally, cotton is one of China’s most important agricultural import from the United States. The Chinese government imposed 25% tariffs on U.S. soybeans and cotton, as well as many other agricultural products. For cotton, the final tariff is as high as 65% for out-of-quota imports when added to the existing tariff (40%), which has put the United States at a disadvantage relative to other exporting countries (Hopkinson, 2018).

In this article, we limit cotton to raw cotton, as defined by the Harmonized System (HS) classification 5201 (cotton, not carded or combed). Yarn is limited to yarn manufactured from cotton for use in commercial production, as defined by HS 5205 (cotton yarn, other than sewing thread containing ≥ 85% cotton, not used for retail). 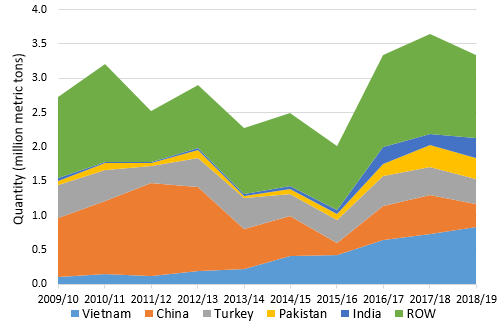 Note: Marketing year starts August 1. Cotton: HS 5201 (cotton, not carded
or combed). ROW is rest of world, which is an aggregation of all remaining
countries.
Source: U.S. Department of Agriculture (2019c). 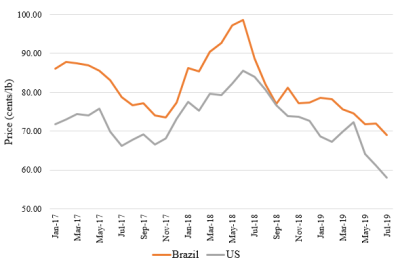 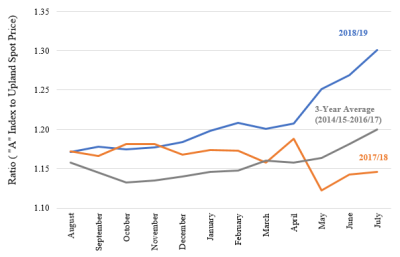 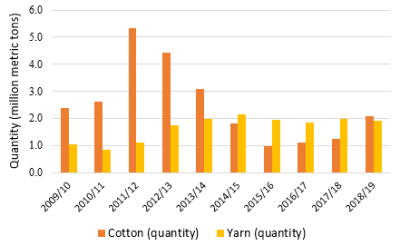 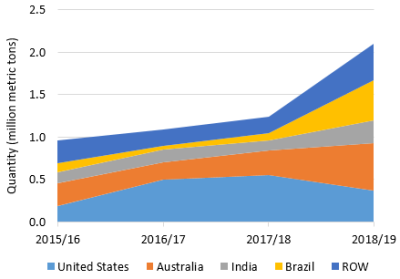 Note: Marketing year starts August 1. ROW is rest of world,
which is an aggregation of all remaining countries. Cotton: HS 5201
(cotton, not carded or combed).
Source: Global Trade Atlas (2019). 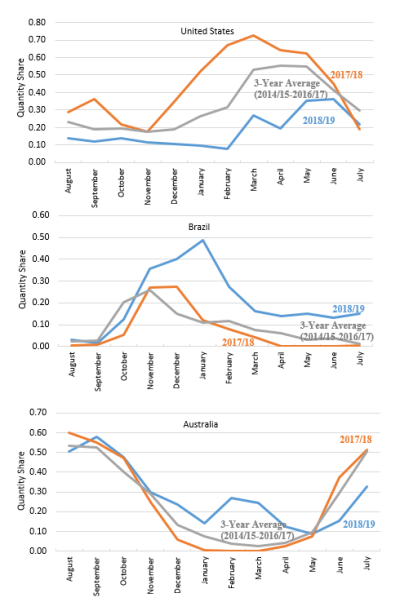 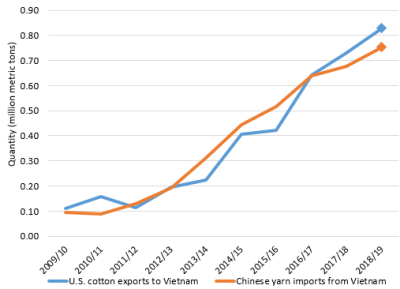 Figure 1 reports U.S. cotton exports since the 2009/10 marketing year (August–July). The data indicate that the trade dispute has had a negative impact on U.S. cotton exports. Since reaching a low of 2 million metric tons (MMT) in 2015/16, exports have recovered significantly, reaching a decade high of over 3.5 MMT in 2017/18. The current marketing season (2018/2019), however, which started when the tariffs were first implemented in August, shows a decline. In 2018/19, U.S. exports were down 0.31 MMT, which is an 8% decline and $600 million loss in value compared to the previous marketing year.

The decline in U.S. cotton exports in 2018/19 suggests that the trade dispute has negatively impacted this sector. We reach a similar conclusion when examining U.S. cotton prices, particularly relative to global cotton prices. We first compare U.S. cotton prices to prices in Brazil, a major competitor of the United States in global cotton markets. Both countries are export-oriented producers of high-quality machine-picked cotton. Shifts in relative prices for these two countries is a good indication of how China’s retaliatory tariffs have affected U.S. prices. Figure 2 shows monthly cotton prices in Brazil (University of São Paulo, 2019) and the U.S. monthly average spot price from January 2017 to July 2019 (USDA, 2019a). Note that prices in both countries have been declining since June 2018. Since September 2018, when prices were relatively equal, U.S. prices have declined at a much faster rate (77 cents/lb to 58 cents/lb) compared to Brazil (77 cents/lb to 69 cents/lb). Declining global prices can be partially attributed to Brazil increasing production to 12.5 million bales in the 2018/19 marketing year, compared to 9.2 million bales in 2017/18 (USDA, 2019d).

Figure 3 shows the ratio between the average Cotlook “A” Index, which is considered to be representative of raw cotton prices on the international market (NCC, 2019), and the monthly U.S. farm price; observed differences in the two price series in recent months may be an indication of how China’s retaliatory tariffs shifted U.S. prices. From 2014 to 2017, the ratio between the two prices averaged about 1.16 (Cotlook “A” Index divided by U.S. farm price). In 2018/19, the ratio persistently increased to around 1.3, indicating an increase in the disparity between “global prices” and U.S. prices. The relatively higher ratio in 2018/19 suggests that U.S. prices were depressed relative to global prices during this period.

Figure 4 reports China’s cotton and yarn imports since 2009/10. Since peaking at nearly 5.3 MMT in 2011/12, Chinese cotton imports declined significantly, reaching a low of 1.0 MMT in 2015/16. Since 2015/16, cotton imports have shown signs of rebounding, increasing by over 10% each year. This rebound is further evidenced by cotton imports this current marketing year (2018/19), which are up 80% from the previous year, despite reductions in imports of U.S. cotton. China’s yarn imports have also remained strong, increasing from about 0.8 MMT in 2010/11 to an average of 2 MMT per year over the last half-decade.

The decrease in cotton imports in China over the 2011/12 to 2016/17 marketing period came as China increased its State Reserve stocks early in the transition period and then began selling domestically produced cotton from the reserve starting in 2015/16. With the introduction of high price supports in 2011, much of China’s domestic production flowed into the reserve, and a large expansion in import quotas allowed imports to achieve an unprecedented level in 2011. In 2014, China reduced its guaranteed producer target price, which helped domestic and world prices to partially converge. In 2015, as auctions to China’s mills and traders from the State Reserve began in earnest, China’s cotton imports were largely confined to its minimum obligations under its WTO accession agreement, the 894,000-ton tariff-rate quota (TRQ) (MacDonald, Gale, and Hansen, 2015). In recent years, China’s domestic use has increased as State Reserve sales have grown, with ending stocks falling by 50% since peaking in 2014/2015 (USDA, 2019b). Consequently, Chinese cotton imports have been steadily increasing since 2015/2016, and it appears that this benefited U.S. exports to China until the onset of the trade dispute (see Figure 5). In 2018/19, China’s imports of U.S. cotton decreased by 0.19 MMT, a decline of about 34% compared to the previous year. Note that the import data reported by Chinese Customs is somewhat smaller than U.S. reported exports. In contrast, China increased imports from Australia by 97%, India by 127%, and Brazil by 480% compared to the previous year.

Although China’s cotton imports have been recovering since 2015/16, current trade tensions are limiting U.S. cotton recovery and benefiting major competitors such as Brazil and Australia. This was particularly evident during the first few months of the 2019 calendar year as large purchases by the State Reserve of Brazilian cotton drove China’s imports from Brazil sharply higher.

Potential Transshipments from United States to China via Vietnam

In recent years, Vietnam has emerged as the leading supplier of yarn to China. Vietnam’s geographic proximity, beneficial trade arrangements, and a competitive cost structure have supported importing cotton and exporting yarn (USDA, 2019e). In 2009, Vietnam accounted for 10% of China’s yarn imports. In the years that followed, Vietnam’s yarn exports to China steadily increased and now account for about 40% (Global Trade Atlas, 2019). During this period, Vietnam’s cotton imports more than tripled, with the United States accounting for an increasing share. In 2012, for instance, the United States accounted for 27% of Vietnam’s cotton imports, rising to 50% by 2017 (United Nations, 2019).

Figure 7 shows U.S. cotton exports to Vietnam and China’s yarn imports from Vietnam from 2009/10 to 2018/19. Note that there is a near perfect relationship between the two, which could indicate that the United States is supplying cotton to the Chinese market through Vietnam’s yarn manufacturing sector.

Because of the broad scope of U.S. agricultural products subject to the retaliatory tariffs and the importance of China to U.S. agricultural exports, many farmers are likely to experience negative effects, such as lower prices and/or lost market opportunities (see Grant et al. in this issue of Choices). The negative effects of retaliatory tariffs on U.S. soybeans have been discussed extensively (see Hitchner, Menzie and Meyers and Adjemian et al. in this issue of Choices). Cotton, another important U.S. export, has received significantly less attention. The USDA’s long-run projections show China’s total imports doubling in the four years after 2019, so constraints on U.S. cotton sales to China could become increasingly important. Further, the current retaliatory tariffs facing U.S. cotton exports could be stimulating additional cotton production in Brazil, potentially limiting the ability for the United States to regain market share in China if trade tensions are resolved.

Overall, global trade and price data suggest that the U.S.–China trade dispute is having a negative impact on U.S. cotton prices and exports. It appears that China is replacing U.S. cotton with imports from Brazil, Australia, and other competing exporters to a lesser degree. This has occurred even as China’s cotton imports have been increasing. The makeup of China’s cotton and yarn imports has been changing over the last seven years, with the rise of Vietnam as the leading destination for U.S. cotton and subsequent exporter of yarn to China.  The retaliatory tariffs may have a secondary effect of further reorienting/accelerating this global supply chain adjustment process.