Labor-Intensive Multiple Cropping Systems and the H-2A Program: Evidence from the Crawfish Industry

Rotations, multi-cropping, and intercropping are examples of multiple cropping, the practice of growing two or more crops in the same growing season or sequential growing seasons, which is commonly practiced in the United States. In the particular case of labor-intensive multiple-cropping systems, labor availability affects the choice of production technologies, cropping patterns, and the competitiveness of U.S. producers relative to low-cost foreign producers (Boucher and Taylor, 2007; Guan et al., 2015). Due to the increasing unwillingness and unavailability of local labor to work in U.S. farm operations, these labor-intensive production systems have had an increasingly difficult time obtaining domestic farmworkers and are relying more on H-2A workers. This is the case for high-value crops such as strawberries, lettuce, asparagus, and crawfish, among others.

To increase revenue and mitigate price risk, some farms plant multiple crops in a given field-year, whether sequentially (multi-crop/double crop) or at the same time (intercrop). However, multi-cropping and intercropping systems, which combine more continuous labor demand over greater than a 10-month window without seasonal downtime, create additional transaction costs for a program (H-2A) that was set up to provide only short-term seasonal labor in small pockets of planting or harvesting times for individual commodities. Hence, the 10-month limit of H-2A workers to work on the same farm has the potential to affect systems producing multiple crops more than traditional systems.

The ability to maintain an adequate supply of these commodities may depend on producers’ ability to fit seasonal workers into intercropping and multi-cropping systems to minimize the cost of production and yield risk. Many farmers have realized this, and increased use of the H-2A program has been noticeable in production systems where the rotational crop is labor intensive, including the crawfish industry.

Hired Labor and the H-2A Program

There are three main categories of farmworkers in the United States: farm operators, unpaid family members/owners, and hired workers (Martin et al., 2013). Historically, unpaid family members/owners provided most of the total labor hours on U.S. farms. However, the turn toward relying on paid employees rather than family labor is well documented (Dubofsky and McCartin, 2017). Hired workers now account for almost 60% of total labor hours on the farms, and their share is increasing steadily (Henderson, 2012). Labor shortages have led to the use of the H-2A guest worker program, through which farm operators can fill temporary and seasonal positions. These workers are allowed to stay under a contract for a maximum of 10 months. Employers can renew the working status of these H-2A workers for up to three years.

The management of hired labor either domestic or through guest worker programs is crucial in high-value crops, which have extreme, labor-intensive periods for planting and picking or harvesting. Crops requiring almost daily picking/harvesting during peak season to secure higher quality and higher prices include strawberries (3 weeks), blueberries (2 weeks), peas (2 weeks), asparagus (1 month), and crawfish (2 months). The sensitivity of these industries to securing able and available domestic labor in peak harvesting seasons has led their operators to consider hiring through the H-2A guest-worker program (Charlton, Castillo, and Hertz, 2018). Berries, fruits and vegetables, and crawfish are commodities featured at the top of the list of crops that hire H-2A workers.

Hiring H-2A workers entails many regulations that go into determining a wage rate. According to the DOL’s H-2A regulations 20 CFR 655.120(l), employers must pay their H-2A workers in corresponding employment at least the highest of (i) the Adverse Effect Wage Rate (AEWR); (ii) the prevailing wage; (iii) the prevailing piece rate; (iv) the agreed-upon collective bargaining wage, if applicable; or (v) the federal or state minimum wage, in effect the time the work is performed (Kushmer, 2017). Also, the employer should be responsible for covering costs that include transportation from the employee’s home to worksite, housing for the workers, and the cost of the visa, H-2A petition, and recruitment.

The cost of hiring through H-2A is not insignificant. Employers tend to pay their workers more than the prevailing wage to secure them. Filing and attorney fees and housing costs add to total wage outlays. Based on the data collected from citrus harvesters in Florida, the pre-employment costs associated with the guest workers that include filing fees, advertisement, surety bonds, travel, and housing are estimated to be nearly $2,000 per worker (Roka et al., 2017). This cost can deter producers from employing through the program, especially when the operation is small and the harvesting window is short, requiring few workers. For example, between 2015 and the third quarter of 2018, the average farm application requested 38 guest workers under the H-2A program for asparagus as a primary crop and 54 guest workers for strawberries as a primary crop. These numbers per application increase under multi-cropping/intercropping scenarios. For example, the average number of guest workers requested by farms listing strawberries, eggplant, and asparagus jointly as their primary crop was 70 workers per application.

Growing H-2A Demand: The Case of Rice–Crawfish Production in Louisiana 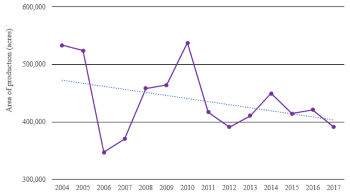 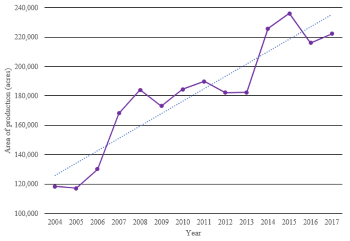 Note: Data from the U.S. Office of Foreign Labor Certification
(2018). Figure reports the number of farmers employing
through the H-2A program. Data filtered by primary crop,
accounting for multiple entries per farmer.

Figure 4. Number of H-2A Workers Certified
for Working on Rice and Crawfish Farms in
Louisiana, 2015–2018 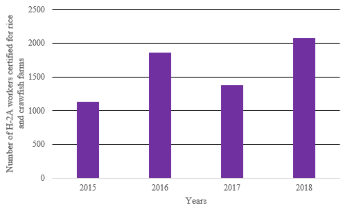 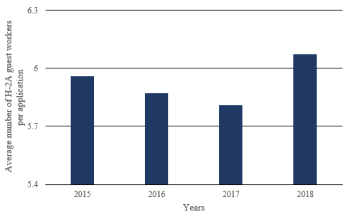 Producers turn to multiple cropping systems to increase income and mitigate production and market risk. Such is the case for Louisiana rice producers, who have moved away from double-cropping of rice to a rotation of rice and crawfish (Salassi, Diliberto, and Webster, 2008). In the 2017 growing season, Louisiana rice producers produced 26.7 million hundredweight (cwt) of rice on 390,803 harvested acres, with an average yield of 68.4 cwt/acre, up from 66.9 cwt/acre reported in 2016. Due to lower calendar-year prices for rice from the previous year, the gross farm value of the rice crop in Louisiana fell from $305.5 million in 2016 to $297.6 million in 2017. Figure 1 depicts a decreasing trend in land allocation for rice production in Louisiana.

At the same time, increasing state and regional demand for crawfish has incentivized the expansion of acreage and production over the last several years. Figure 2 shows the increasing trend in Louisiana crawfish production. Notably, in 2014, farm-raised crawfish production totaled 225,789 acres, up 40,000 acres from the previous year, and reached 236,095 acres of land with a gross farm value of $189 million in 2015. In 2016, producers were estimated to produce 135 million pounds of crawfish on 216,000 acres, up 2% over 2015, which generated a gross farm value of $196 million. Estimates from the field in 2017 indicated farm-raised crawfish production area increased by 3% more than in 2016 (LSU AgCenter, 2017).

Crawfish producers rely predominately on H-2A labor. The number of Louisiana rice and crawfish farmers employing through the H-2A program has increased between 2015 and 2018 (Figure 3). Also, the number of H-2A workers certified to work on rice and crawfish farms in Louisiana has increased in the same period (Figure 4). Rice–crawfish producers employing through the H-2A program could be harmed by the 10-month limit on the H-2A guest worker visa, as they need to reapply to secure workers.

Combined U.S. Office of Foreign Labor Certification (OFLC) data from 2015–2018 (Q3) show that among rice and crawfish producers employing H-2A workers in Louisiana, 200 farmers self-reported growing both crawfish and rice, 77 farmers grow crawfish only, and 47 farmers grow rice only. For the period 2015 to 2018 (Q3), farmers that requested H-2A guest workers and listed rice, crawfish, or a rice/crawfish joint primary crop only requested between four and six guest workers per application. Along with the increase in the number or H-2A workers certified for Louisiana rice and crawfish farms (Figure 4), the average number of H-2A workers requested per application is also increasing. According to OFLC data for fiscal year (FY) 2015, the average number of H-2A guest workers per application requested by Louisiana rice and crawfish farmers was 5.95, which increased by 2% in FY2018, reaching 6.07.

Efficiency in labor-intensive multi-cropping and intercropping production systems depends on non-labor variable inputs, fixed-cost machinery, and labor costs and how these costs can be shared or distributed within a growing season. With labor shortages becoming a more prevalent concern, effective and efficient use of labor is crucial to these production systems. Guest worker programs that are flexible in terms of allocating employed workers and the period of their employment could generate gains from multi-cropping and intercropping systems. That potential flexibility especially impacts multi-cropping systems that are spread over multiple years or multiple seasons within a year, which run up against the 10-month limit of current H-2A program rules.

The use of readily available labor not reserved for a single crop and for a longer period may be linked to whole-farm allocative efficiency, as workers can be reallocated to more labor-intensive tasks that have a relatively more expensive capital substitute option. As the marginal return from labor fluctuates throughout production, the opportunity to move employees to critical labor-intensive tasks results in fewer periods of underutilized time. This means that producers can avoid intervals where they have excess labor capacity for the jobs that need to be completed. Further, this makes it easier for the producers to meet the minimum 75% threshold of certified time required under current H-2A employment rules. Also, a more extended employment period allows for potentially fewer breaks in productivity caused by reapplying to the program and not being able to secure the guest workers needed on time for the new production cycle.

Further, extending the time guest workers can be employed could generate productivity gains from past working experience with the same employer. Workers can be more productive since the types of tasks are most likely the same and they are more familiar with the specific farm operation (accumulation of specific farm human capital). Additionally, employing the same people for a longer period can help mitigate labor management risks since trust relations and communication channels take time to establish.

As domestic labor supply for hired farmworker jobs continues to erode in many regions of the country, a greater number of guest workers through programs such as H-2A are being demanded. While used by farmers in some regions to manage labor-intensive planting/harvesting activities in fruits and vegetables, many of these same regions have a historical supply of labor contractors that provide a market alternative that coordinates the supply of labor (domestic or immigrant) and reduces the overhead for an individual farmer in having to search and coordinate processing of H-2A paperwork. Unfortunately, for regions that are now substituting smaller numbers of H-2A labor on historically capital-intensive systems, the total labor costs are higher because of higher average fixed transaction costs per worker.

Proposed policies such as the H-2C legislation have attributes that may be needed to maintain longer-term efficiency and productivity for farmers. Allowing guest workers to stay employed over longer periods with individual farm operations has the potential to reduce transaction costs and increase whole-farm efficiency by leveraging guest workers’ specific farm experiences over multiple production seasons. Such attributes of farm labor policy reform may serve as important elements for maintaining both farm profitability and ample availability of certain food commodities that are becoming more guest-worker dependent in regions that have historically provided an ample supply of domestic seasonal farmworkers.