The U.S. agricultural sector depends to a significant degree on a stable supply of farmworkers. Regardless of the prevalence of mechanization in many agricultural industries, labor demand is still strong during peak seasons, when the marginal returns from hiring labor are substantial, especially if no other labor is available. Since 2003, the number of U.S. farmworkers has continuously declined (U.S. Department of Agriculture, multiple years), which is of great concern to labor-intensive agricultural industries such as the fruits and vegetable industry (Turnbull, 2011; Honig, 2018) as well as high-value specialty crops that require hand harvesting (Wu and Guan, 2016; Hill, 2018). The decline in the number of U.S. farmworkers has been coupled with a decrease in the supply of local labor in rural areas and firmer enforcement of immigration policies such as border patrol and deportation, which mainly affect the labor supply of undocumented workers (Escalante and Luo, 2017; Martin, 2017).

Agricultural operations facing labor shortages have turned to the H-2A guest-worker program to secure needed farmworkers. These shortages are mainly the result of an insufficiently able and willing supply of local and domestic labor. Though the program offers a solution by mitigating risk associated with insufficient labor, documenting a need for H-2A workers can be cumbersome (Guan, Roka, and Whidden, 2015; Devadoss and Luckstead, 2018; Bampasidou and Salassi, 2019). Farm operators using the H-2A program need to show that (i) the nature of the tasks performed is seasonal, temporary, and tied to the agricultural operation and the labor certification period of employment, (ii) prove that they will not be able to secure local or domestic labor, (iii) demonstrate that the hiring of H-2A workers should not hinder the employment of domestic workers or adversely affect their wage pay scheme in similar jobs.

Whether the H-2A program is a solution to the decreasing farm labor force is still a matter of discussion. The program has been considered as a substitute to local communities or a supplement to the existing workforce (Devadoss and Luckstead, 2008; Wei et al. 2016; Krumel, 2017) and as an imperfect substitute for undocumented workers (Devadoss and Luckstead, 2018). Nevertheless, it must be acknowledged that the profile of the U.S. farm labor force is changing. This article reviews trends in U.S. farm hired labor and the H-2A program, highlighting a changing worker profile in U.S. agriculture. In addition, we present topics of discussion over which policy making can have influence. 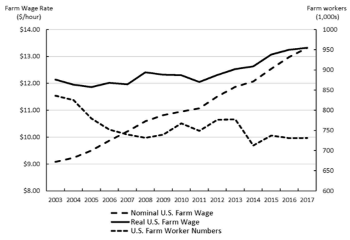 Changes in farm wages since 2003 are illustrated in Figure 1. Average farm wages have responded to the decline in farmworker numbers over this period. In 2017, the average U.S. nominal farm wage rate was $13.32/hour, up from $9.08/hour in 2003 (USDA). This average nominal farm wage rate has risen steadily over the period by an annual average of $0.30/hour. In 2017, the highest average farm wage rates were observed in the Pacific region (Oregon and Washington) at $14.64/hour, California at $14.46/hour, and the Northern Plains region (Kansas, Nebraska, North Dakota, and South Dakota) at $14.18/hour. The lowest average nominal farm wage rates in 2017 were observed in the Delta region (Arkansas, Louisiana, and Mississippi) at $11.15/hour, the Mountain III region (Colorado, Nevada, and Utah) at $11.20/hour, and the Southeast region (Alabama, Georgia, and South Carolina) at $11.55/hour (Bampasidou and Salassi, 2019).

Trends in H-2A Program Use 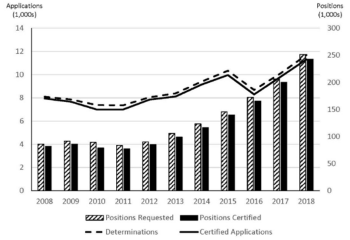 The increased interest and use of the H-2A program can be attributed to the success of the program in providing farm operators with workers in times during which securing native labor has not been guaranteed. States that show an increased dependency on the program (including California, Florida, Washington, Georgia) produce mainly specialty crops, fruits, and vegetables—perishable and high-value crops that require hand-picking or hand-harvesting. The article by Luckstead and Devadoss (2019) in this theme presents more information on the H-2A program and reports on leading states and major agricultural industries employing H-2A workers.

Maintaining a steady farm workforce is an important policy consideration. Securing and retaining farmworkers is one of the main challenges faced by the U.S. agricultural sector. While they may not require specialized training, agricultural jobs are physically demanding, and workers experience heavy workloads, which may deter natives from applying for them. This results in opportunities for guest workers, demonstrated by the decreased number of farmworkers and the increased use of H-2A. In recent years, the H-2A program has attracted a lot of attention as it has gained momentum and more producers have used it to guarantee timely and sufficient labor. The turn toward guest-worker programs has led to a change in the profile of the farmworker in the United States, which requires new perspectives in how farm operators view farm labor and existing policies.

A decrease in farm labor requires farm operators to consider ways to cope with future labor shortages or the continuation of labor shortages. Farm operations that traditionally depend on labor could either switch to non-labor-intensive crops and further introduce technology and mechanization or invest in guest-worker programs (Rosenberg, 2004; Huffman, 2012; Onel and Farnsworth, 2016). Those investing in a guest-worker program need to introduce ways to comply with work regulations and health provisions to workers (Escalante and Luo, 2017) and to educate personnel to supervise guest workers.

Switching to H-2A will also renew discussions on potential adverse effects in the local labor market. The farm sector mainly employs low-skilled workers, which means that the sector draws from the same labor pool as other less labor-intensive industries. Considering also the seasonal and temporary nature of the farm activities, the farm sector may not be the first employment choice for these workers. Still, it is unclear whether the program substitutes away from local labor or supplements it. Moreover, to counter labor shortages, producers tend to offer higher wages (Ifft and Jodlowski, 2016; Wu and Guan, 2016). The real farm wage has increased in recent years; in many cases, farm wages are above the federal or state-level minimum wage. In reality, many of the farm operations employing through the H-2A program offer a higher wage as they need to satisfy the adverse effect wage rate restriction. With many states moving toward a higher minimum wage (e.g., California and Florida), adjustments to guest-worker programs may need to take place as an increase in the minimum wage will affect the industries using the H-2A program even more.

Employing through a guest-worker program means additional labor costs associated with worker search costs, including advertising, listing agents, and immigration lawyers. There has been an increase in the number of operations that rely on law firms to deal with the paperwork associated with applying to the program, particularly in recent years (Bampasidou and Salassi, 2019). These costs lead to questions about the H-2A program’s effectiveness and efficiency. Recommendations for a revised, more flexible guest-worker program have regularly been brought up as a topic of discussion in the U.S. Senate. Some of the latest recommendations include the introduction of the H-2C program as a way to extend the H-2A program. Still, there are hurdles regarding the proposed bill (Rural Migration News, 2018b).

Main items on the agenda for the H-2C program included (i) extending the period of employment to satisfy seasonal and year-round jobs; (ii) easing the cost of employment and the burden of providing benefits, housing, and transportation to guest workers; (iii) allowing experienced undocumented workers to participate in the H-2C program. The H-2C program has a cap of 450,000 jobs, including 40,000 in the meat and poultry processing industry. The program will allow guest-workers to stay year-round on a 36-month, renewable visa. These workers will have to return to their country for at least 60 days before re-entering the United States. Regarding employment costs, employers do not have to use the adverse-effect wage rate but must pay at least 115% of the federal and state minimum wage. Also, employers can opt to provide housing and transportation for their workers. H-2C workers cannot bring spouses and minor children unless they also participate in a guest-worker program. In addition, H-2C workers are not eligible for federal public benefits or for federal refundable tax credits. Regarding unauthorized immigrants, the program provides the opportunity for them to adjust to lawful status and participate in the program legally (Rural Migration News, 2018a,b).

As the discussions over introducing a new guest-worker program continue, so do discussions over immigration policies. Unauthorized immigrants were a major topic in the policy agenda during the last presidential election. Measures proposed to counter undocumented immigration include increased border patrol, deportations, and building a wall on the Mexico–U.S. border. Despite the rhetoric, a large share of agricultural labor is provided by undocumented workers (Zahniser et al., 2012; Wei et al., 2016; Martin, 2017). With hired labor in the farm sector accounting for about 60% (Henderson, 2013) and the H-2A program providing about 10% of farm labor in the United States, any effort to further understand how immigration policies can affect labor shortages could help to move policy making forward.

Labor shortages are an essential concern of agricultural producers and farm managers. The decrease in the number of U.S. hired farm labor and the increasing dependence on nondomestic and nonlocal hired labor is well documented in articles, reports, mass-media coverage, and research outlets. The trends pointed out in this article indicate changes in the agricultural workforce. The decreasing number of workers, followed by increasing wage rates, could be alarming for the economic wellbeing of several labor-intensive agricultural industries. The goal of sustaining a viable farm sector depends on the timely supply of farm labor, and the guest-worker programs can be part of the solution. Nevertheless, labor market conditions and immigration reforms could present challenges for operations that opt to secure labor via the H-2A program and via the traditional labor market. Discussions over the H-2A program could benefit from quantifying the demand for H-2A labor. Labor shortages remain a complex issue and coping with them requires further investigation from policy makers and researchers.

This article discussed some aspects that could be of concern to farm operators and farm managers. A more comprehensive investigation of labor shortages, the reasons they are more prominent, and potential solutions is needed. In addition, a discussion over immigration policies and possible adverse labor market effects from an increasing H-2A labor force should continue; to date, no measure providing a solid solution has been introduced. Increases in the minimum wage to match a living wage will be evaluated as to how they trickle down to already higher-paying farm jobs. From a policy-making perspective, efforts should be directed towards the development and evaluation of guest worker programs, in order to introduce more effective and efficient solutions to labor shortages. To date, the majority of the discussions have focused on the increased paperwork that H-2A requires, the length of time needed for applications to be examined, and the term of employment for the H-2A workers.

Ifft, J., and M. Jodlowski. 2016. “Is ICE Freezing US Agriculture? Impacts of Local Immigration Enforcement on US Farm Profitability and Structure.” Paper presented at the annual meeting of the Agricultural and Applied Economics Association, Boston, MA, July 31–August 2.

[1] The information in this section comes the U.S. Department of Agriculture’s National Agricultural Statistics Services, as reported in issues of Farm Labor.

[2] The data on 2008–2018 trends presented in this section are based on figures from the U.S. Department of Labor.