Theme Overview: The Role of Guest Workers in U.S. Agriculture

The U.S. agricultural sector has endured labor shortage problems as far back as the 1940s. To alleviate these labor shortfalls, the U.S. government introduced the bracero program to ease labor woes in 1942, discontinuing the program in 1964. Ever since, farm labor scarcity and the resulting high wage rates have incentivized unauthorized migration from Mexico. U.S. agriculture and other industries (e.g., hotels, meat packing, and seafood processing) increasingly rely on undocumented workers. According to the National Center for Farmworker Health (2012), about 3 million migrant and seasonal farm laborers work in the U.S. agricultural sector and allied industries. 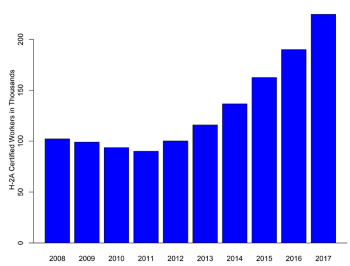 However, enforcement of tighter immigration policies through border control, domestic enforcement and deportation, employer penalties, and e-verification has caused acute labor shortages in the farm sector. Consequently, about 20% of agricultural products are unharvested nationwide (Johnson, 2007).[1] To meet this labor scarcity, growers have found the H-2A program, which brings guest workers to the United States, to be a viable employment alternative. The H-2A program has existed since the mid-1960s, but it didn’t gain significant momentum until the mid-2000s. The program was originally known as the H-2 program and later reclassified by the Immigration Reform and Control Act of 1986 as the H-2A program for agricultural workers. In recent years, U.S. farmers have relied heavily on these guest workers to complete their operations as farmers have become more familiar with securing laborers through the H-2A program, labor contractors are facilitating the hiring process, and more foreign workers prefer to work legally in the United States than as undocumented workers. As shown in Figure 1, 102,286 guest-worker jobs were certified for employment in 2008, which declined to 90,102 in 2011, and then rose rapidly to 224,637 in 2017. Because of the progress made in streamlining the guest-worker program and the stricter domestic enforcement of and deportation of undocumented workers, the H-2A workforce could reach up to 20% of U.S. farmworkers, signifying the importance of these workers to agriculture.

The H-2A worker program has become more popular partly because lower birth rates, improved education, and transition of rural workers to higher paid jobs in the nonfarm sector in Mexico have tightened the undocumented labor supply to the United States (Charlton and Taylor, 2016), resulting in higher wage rates, particularly in fruit and vegetable cultivation. Consequently, growers are increasingly turning toward employing guest workers. The H-2A workers contribute significantly to the U.S. agricultural economy. Without these workers, farmers will incur higher costs of production, crop loss, and quality deterioration (Clark, 2017). The economic contribution of guest workers varies across states depending on the labor-intensive agriculture. For example, in 2015, the contribution of guest workers to fruit production in Washington State through various economic activities was valued at $619 million (ECONorthwest, 2017).

Martin covers H-2A employment, focusing on California, the U.S. leader in fruit and vegetable production. The H-2 program allows U.S. farm employers who anticipate too few workers to request certification from the U.S. Department of Labor of their need to recruit and employ foreign guest workers to fill seasonal jobs. There are a million year-round full-time equivalent jobs in U.S. crop agriculture, including a third in California. Until 2004–2005, the number of U.S. farm jobs certified to be filled by H-2A workers was below 50,000, and less than 5,000 in California. Over the past decade, the number of certified H-2A jobs has quadrupled to over 200,000, rising especially fast in California. California offers a contrast in how farmers obtain H-2A guest workers. Most California H-2A workers are recruited and deployed by labor contractors.

Bampasidou and Salassi cover trends in U.S. farm labor and the extent to which the H-2A program is utilized in the United States. They discuss the changing profile of agricultural farmworkers and propose that the agricultural sector may face future labor shortages and imminent policy changes, such as the H-2C program and immigration reforms.

Osti, Bampasidou, and Fannin discuss production and efficiency under the scope of the H-2A guest worker program. Given recent trends in the utilization of the H-2A program and restrictions regarding the employment period under the program, they revisit production efficiency and discuss labor management practices.

[1] Rural Migration News (2007) provides a detailed and specific list of these shortages and how they have adversely affected crucial cultivational operations, resulting in heavy losses.